Ellicott Development Corp. is poised to take responsibility of a grassy city-owned lot at the southeast corner of Main and Best streets, even as it continues its redevelopment of the St. Paul Mall properties just down the street.

The Buffalo-based firm owned by Carl and William Paladino is expected to be named designated developer of the triangular parcel at 1127 Main, adjacent to a Metro PCS store and across from the Summer/Best Metro Rail station.

The quarter-acre commercial property is owned by the Buffalo Urban Renewal Agency, which will meet on Thursday to vote on the proposal. BURA had last issued a request-for-proposals for the site six years ago.

The vacant land is currently assessed by the city at $151,100, but Ellicott and city officials have not yet agreed on a purchase price.

The agency did not say specifically what Ellicott's plans would be, but noted that Ellicott is also buying the adjacent property at 1125 Main, and plans to redevelop them together as a mixed-use building. William Paladino said that – while he had no specific plans yet for the site – it would be related to a "future phase" of the ongoing work at 1091 Main.

Ellicott has been busily tackling the $42 million redevelopment of the block between East North and Best streets, after years of assembling the land and preparing plans.

The firm constructed a six-story medical office building at 1091 Main, at the northeast corner of St. Paul and Main streets, with 167,000 square feet of retail and office space, plus one level of underground parking for 50 cars.

That building is connected through a two-story winter-garden with the former Our Lady of Lourdes church at 1115 Main, which has been adaptively reused into a 14,000-square-foot mix of retail, restaurant, commercial office and residential space – including construction of two additional floors within the open cathedral. There are three apartments on the third floor.

The firm also is planning a second $40 million, nine-story adjacent building on 1.17 acres at 11 St. Paul, with a five-story parking ramp and a three-story Element by Westin Hotel on top.

Linked to the other two, the 320,000-square-foot building would include parking for 560 vehicles, plus 14,000 square feet of ground-floor retail storefront, mostly along St. Paul and wrapping around onto Ellicott Street. The extended-stay hotel will have 103 rooms, with a pool, fitness center and other amenities.

With its new six-story retail and medical office building now open next to Our Lady of Lourdes Church, Ellicott Development Co. is moving ahead with its next venture on the larger site – an eight -story hotel and parking ramp. The Buffalo-based developer is proposing to construct the 320,000-square-foot building on a 1.17-acre surface parking lot at 11 St.

Ellicott gets OK for parking ramp, hotel near medical campus

Ellicott Development Co. expects to break ground by late fall on the newest phase of its redevelopment of the St. Paul Mall campus north of the Buffalo Niagara Medical Campus, after the Buffalo Planning Board Monday approved the $40 million project. The Buffalo-based developer wants to construct a new nine-story building at 1091 Main St., with a six-story parking

Not content with its new six-story medical office building and the renovation of Our Lady of Lourdes Church near downtown Buffalo, Ellicott Development Co. is now planning a nine-story building on a surface parking lot next door. The $30 million project at 1091 Main St. calls for a parking structure for 431 vehicles, plus a 104-room extended-stay hotel and

Ellicott Development Co., which is currently renovating the former Our Lady of Lourdes Church and erecting a six-story medical office building next to it, has  completed its purchase of a pair of dead-end streets from the city as part of the multi-phase project. The Buffalo-based developer owned by Carl and William Paladino paid $960,000 this week to acquire St.

Not content with just redoing Our Lady of Lourdes Church on Main Street and adding a medical office building next door, developer William Paladino now wants to add a new eight-story hotel and parking ramp to his growing St. Paul Mall project. Paladino said his firm is planning to put up a new four-story parking ramp with a 107-room

A diagram of the St. Paul Mall and Our Lady of Lourdes projects. 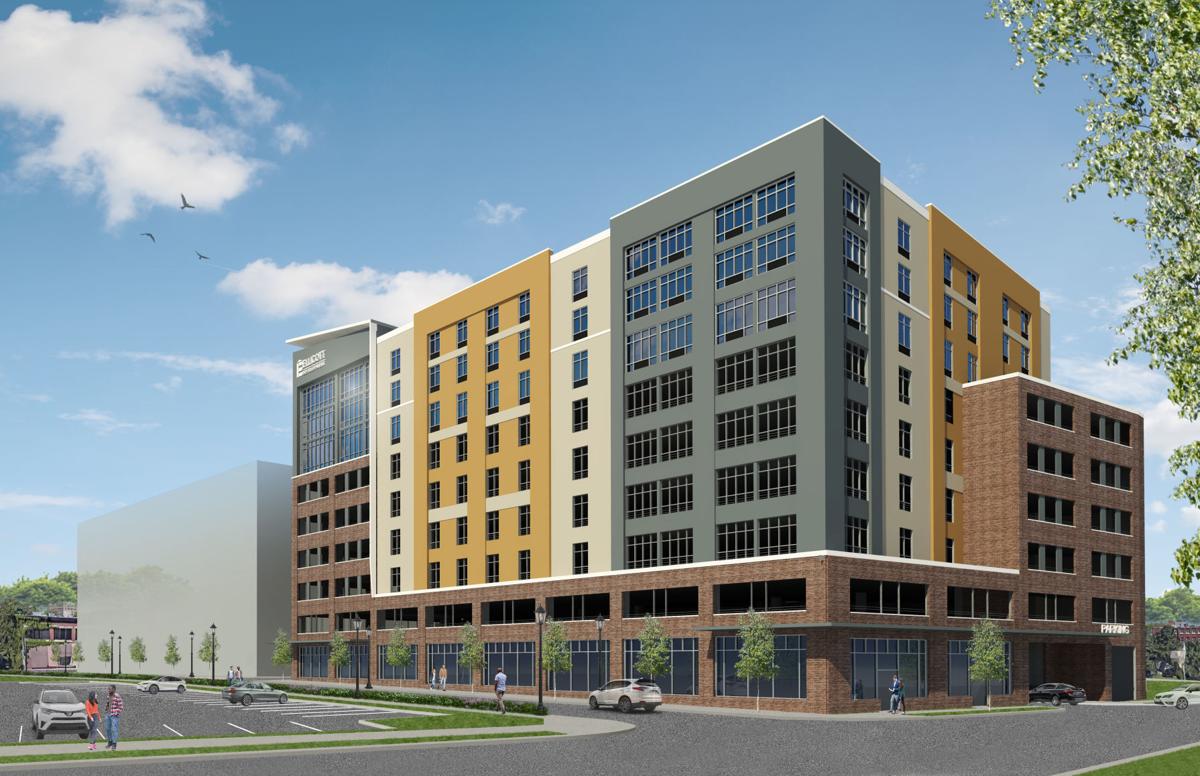 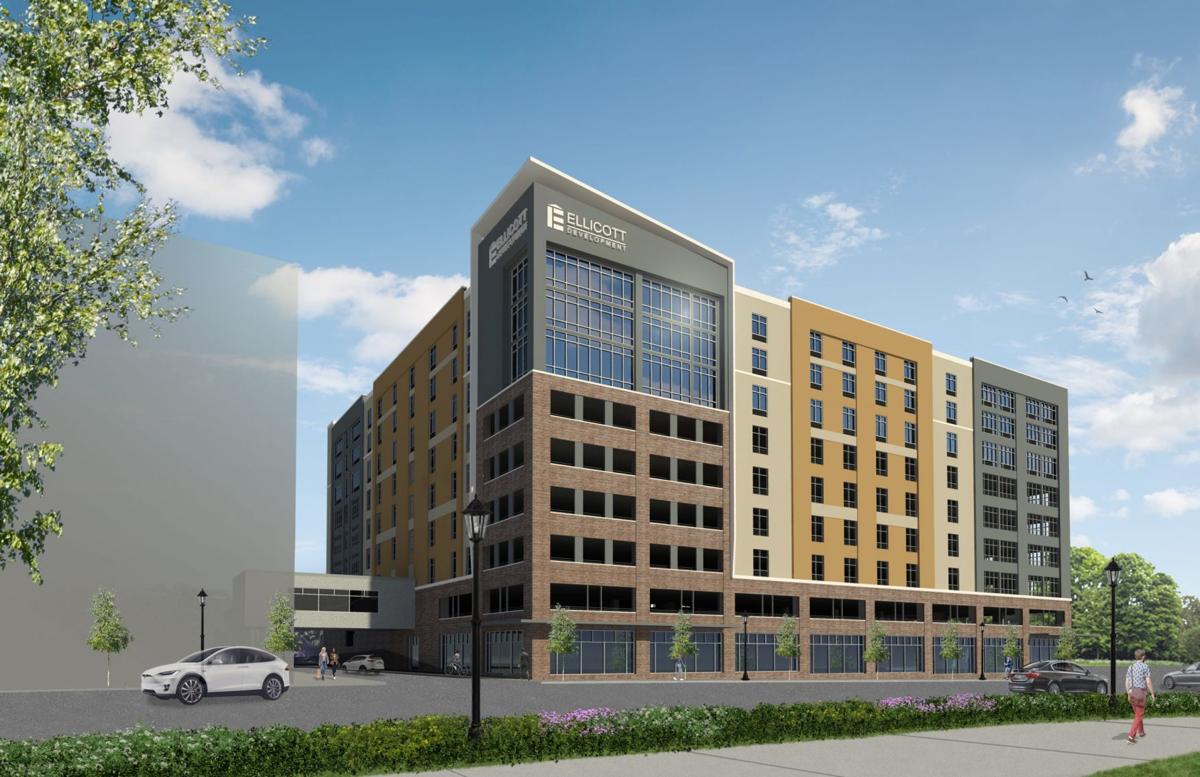 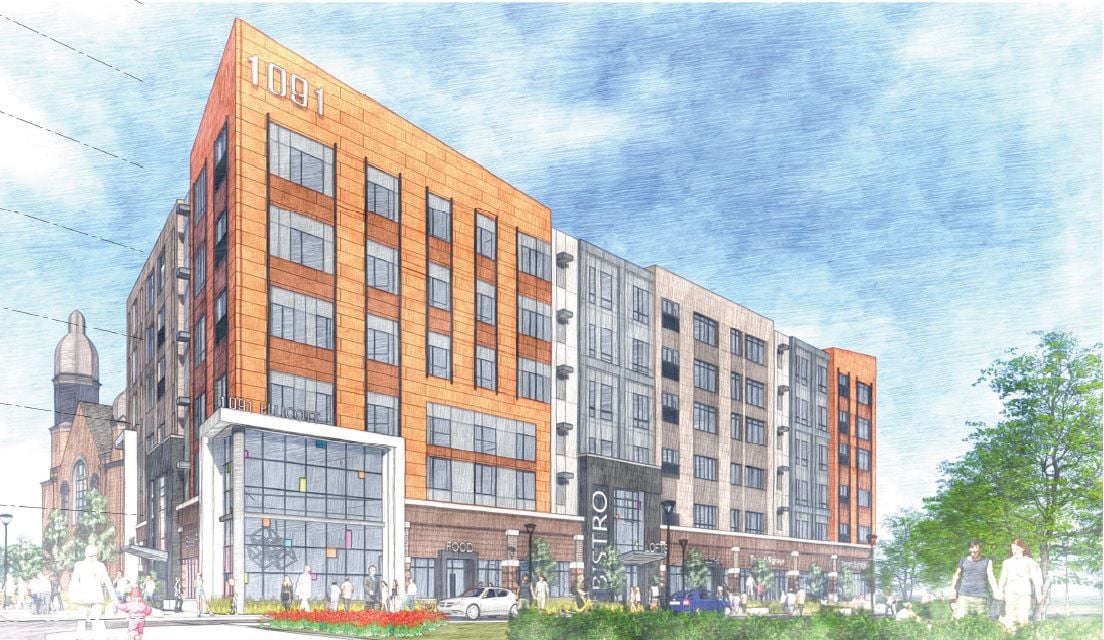 A rendering of the six-story medical office building under construction next door to Our Lady of Lourdes Church, at 1091 Main St. (provided photo)

A rendering of the project renovating the former Our Lady of Lourdes Church and construction of the adjacent medical building. Ellicott Development is now also proposing a new 8-story hotel, retail and parking building across St. Paul St. (Image courtesy of the Buffalo Planning Board)

This vacant city-owned parcel at 1127 Main may go to Ellicott Development Corp., under a designated developer agreement.