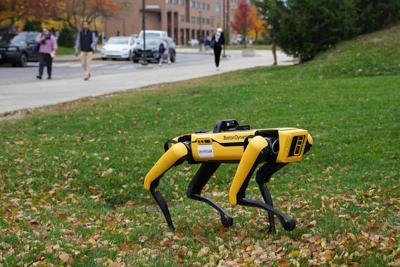 When University at Buffalo researchers take Yubie the robot dog for a walk on campus, people stop in their tracks and react.

Those who have usually approach with smiles and pull out their phones to take photos. If invited to touch the bright-yellow headless quadruped, people often pet it like a real dog.

Yubie, whose brand name is Spot the Agile Mobile Robot, was recently acquired by UB’s School of Engineering and Applied Sciences as a research platform to explore new frontiers in robotics, computer science, artificial intelligence and other high-tech fields.

But it’s also an education tool whose presence on campus can serve to excite, inspire or just familiarize students with the robotic helpers of the future.

“Part of Yubie’s purpose is not just research, but also education and how we think about and react to robots,” said Karthik Dantu, associate professor in UB’s Department of Computer Science and Engineering. “I have been doing robotics for 20 years, and when I first saw it, I had the same reaction as most students: Wow, that’s cool.”

“Every time we walk on campus, the amount of excitement it generates toward robotics is far beyond anything I can do by showing some slides or pictures,” Dantu added. “We would like to channel that to really excite anybody about AI and robotics and other technologies that are coming. How can we motivate them to want to learn and become the next generation of people who will build these technologies?”

Part of that mission is teaching that robots are tremendous tools for good – despite the obvious potential to use them for harm. Spot’s predecessor, Big Dog, was developed in 2005 by Boston Dynamics for military use as a “pack mule” to carry heavy loads for troops in the field. Although not meant to serve as a weapon, the black, 240-pound workhorse looks like something Darth Vader would have as a pet.

In 2016, Boston Dynamics introduced the smaller, 70-pound school bus yellow model dubbed Spot as an agile robot that can navigate terrain other robots can’t and inspect places that might be risky for humans to enter. Its commercial price tag is about $100,000, and it can be equipped with computers to expand its range of abilities.

Dantu said one of his students is studying how the robot dog may be used to inspect infrastructure, like offshore oil rigs, which are generally remote and pose devastating consequences to humans and wildlife if something goes wrong.

“Their standards may say you have to inspect a rig every 90 days, but if you have a robot, there’s no reason you can’t inspect daily,” Dantu said. “You want to be able to spot a crack or a leak right away, so the first thing we can do is work on perception, giving the robot the ability to sense and identify a problem.”

Robot dogs could also be used to sense “hot spots” in a disaster area to help humans avoid them and enter buildings damaged by earthquakes or hurricanes to aid search-and-rescue operations and minimize risk to human responders.

While research institutions like UB embrace the goal of devising helpful applications for these promising devices, the potential for weaponizing them has generated controversy about their use. An episode of the dystopian horror series “Black Mirror” about a pack of armed robotic guard dogs chasing down and killing humans didn’t help.

Just this month, Boston Dynamics and several other robotics companies pledged never to weaponize their robots and urged customers who purchase them to do the same. Still, when UB posted a recent video introducing “Spot” on Instagram, some commenters were a little freaked out.

“THIS IS TOO BLACK MIRROR,” one wrote. “Oh man, this is so grim,” wrote another. Other comments included, “Disturbing,” “Can we not” and “Nope.”

But when Dantu and master’s student Yashom Dighe walk the dog around campus, it is met with more amazement than alarm. UB’s online naming vote garnered 140 suggestions and six of the most UB-oriented were chosen as finalists. “Yubie” won and the robot will soon wear UB blue and its new name to spread more goodwill on campus, Dantu said.

On a recent walk, Yubie showed how its five cameras can sense walls, furniture and people from inches away and maneuver around them, climb stairs and even navigate grassy, uneven terrain that would trip up other robots. Dighe can also make Yubie gesture with a doglike head turn – impressive since it has no head – as well as lie down, bow forward in downward dog pose and even roll over to “have its belly rubbed,” or its battery changed.

“What is that?” exclaimed one student.

UB sophomore Paige Holt said the robot “scared the life out of me the first time I saw it” coming toward her. “Now I think it’s funny that everyone thinks of it as an actual dog, when it’s more like a drone,” she said.

Dighe asked her what she’d like to see Yubie do. “Jump!” she said.

“He isn’t trained to do that yet,” Dighe admitted.

Dave Doermann, director of UB’s Institute for Artificial Intelligence and Data Science, called Yubie “a magnet that brings people together. It makes people realize we are doing really cool stuff and teaching them that there are a lot of good things that can be done with these technologies.”

It also opens conversations that allow researchers to reassure scared skeptics that robotics and AI are a long way from being able to produce autonomous robots that take over the world in dystopian movies.

“These devices have narrow intelligence, so we can only design them to do specific things,” Doermann said. “A Roomba can vacuum your house, but it can’t bring you a beer. And that’s what people need to trust.”

Eventually, robots that serve as guide dogs, surveyors and personal assistants will be as routine as keeping a smartphone in your pocket, Dantu said. As for assigning them anthropomorphic characteristics, that’s a function of human design, not the device itself, he said.

“Yubie doesn’t know that it’s supposed to be a dog or that it’s rolling over,” Dantu said. “Yet it evokes these emotions in people.”

While Yubie’s robotic appearance and insect-like gait may prevent people from getting attached, that may not be the case with some new “humanoid” robots to appear on campus soon.

Dantu’s department has just welcomed Nao, a 2-foot-tall robot human-inspired robot made by SoftBank that will be part of a pilot project to remind nursing home patients to take their medication or call family members.

The “Graduate Workers’ State of the Union” statement cited increased workloads, “poverty wages” and student fees that amount to “a work tax,” …

After terminal pancreatic cancer diagnosis, UB researcher establishes fund so work like hers can live on

The E. Brooke Lerner Research Fund, will be geared toward supporting new ideas and out-of-the-box thinking for the purpose of strengthening pr…

State of the University: UB flagship on track to meet $1B research goal

UB President Satish K. Tripathi said the university is on track to meet its goals to achieve $1 billion in research funding and become a Top 2…

Researchers at the University at Buffalo have been awarded nearly $3 million in federal funding to study the impacts of climate change.

UB officials shared the school’s progress Friday at an event to celebrate its next important sign of growth, a new five-story, 120,000-square-…

Here are photos of Yubie, a robot dog that was recently acquired by UB’s Jacobs School of Engineering and Applied Sciences.

Through the horror and desperation, rare scenes of redemption in Syria and Turkey 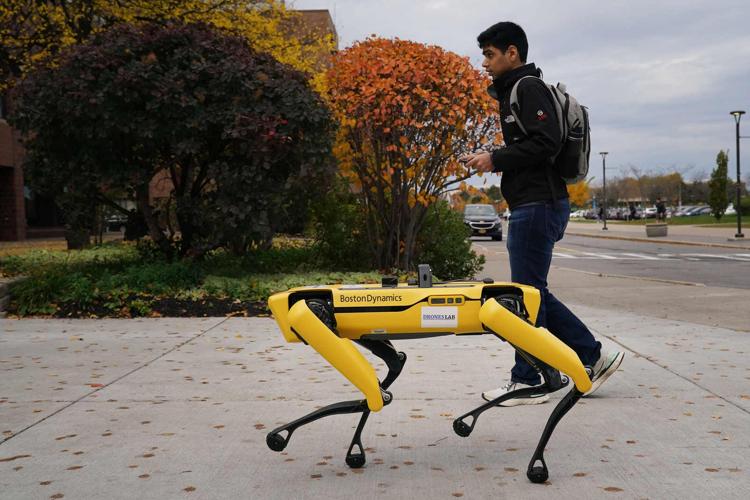 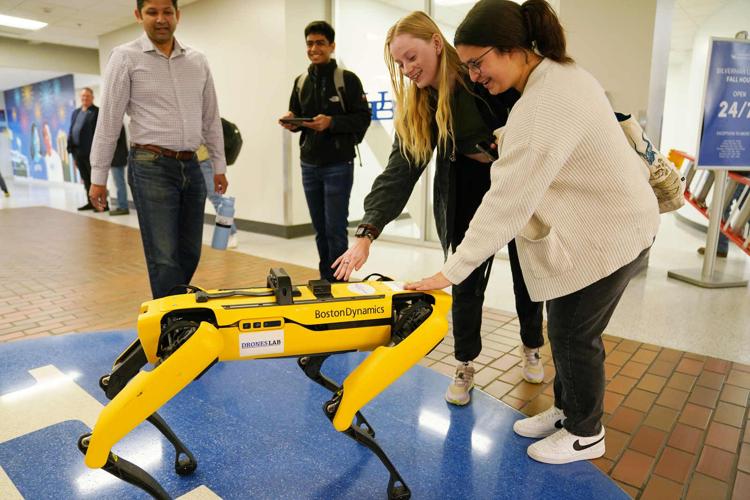 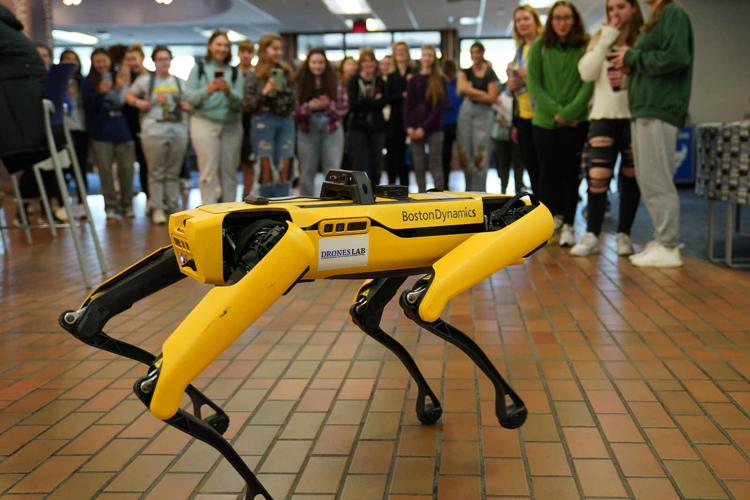 Yubie, the new four-legged robot from Boston Dynamics, draws attention as it navigates around campus at University at Buffalo on Wednesday, Oct. 26, 2022. 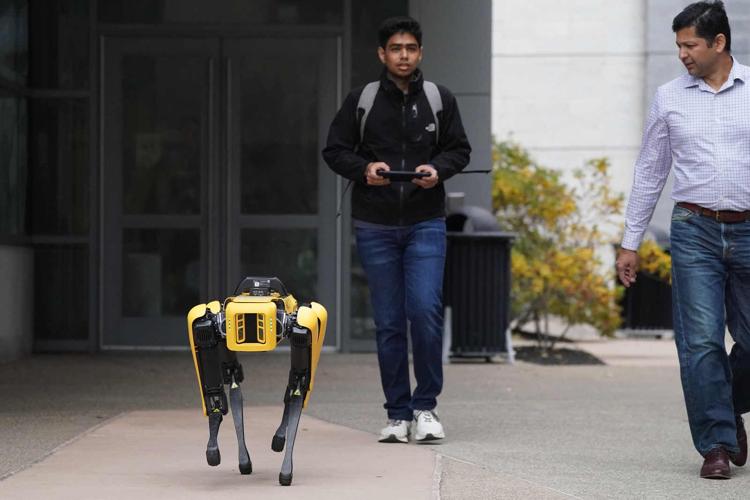 Yashom Dighe operates Yubie, the new four-legged robot from Boston Dynamics, as it navigates around campus at University at Buffalo with Associate Professor Karthik Dantu, right, on Wednesday, Oct. 26, 2022. 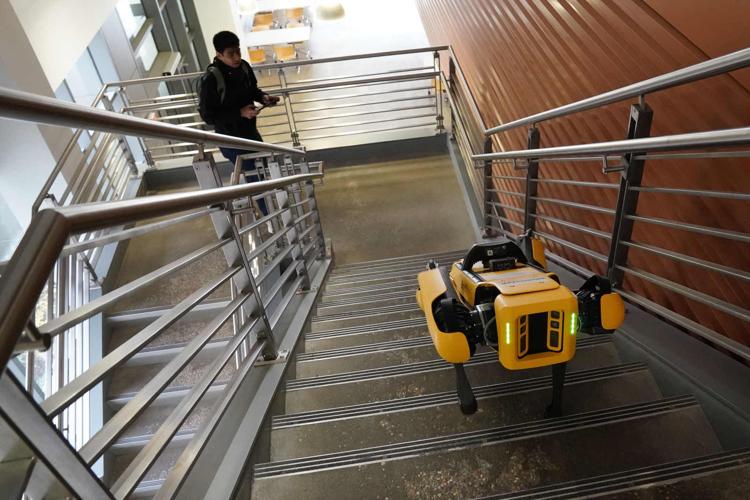 Yashom Dighe operates Yubie as it walks up a staircase.