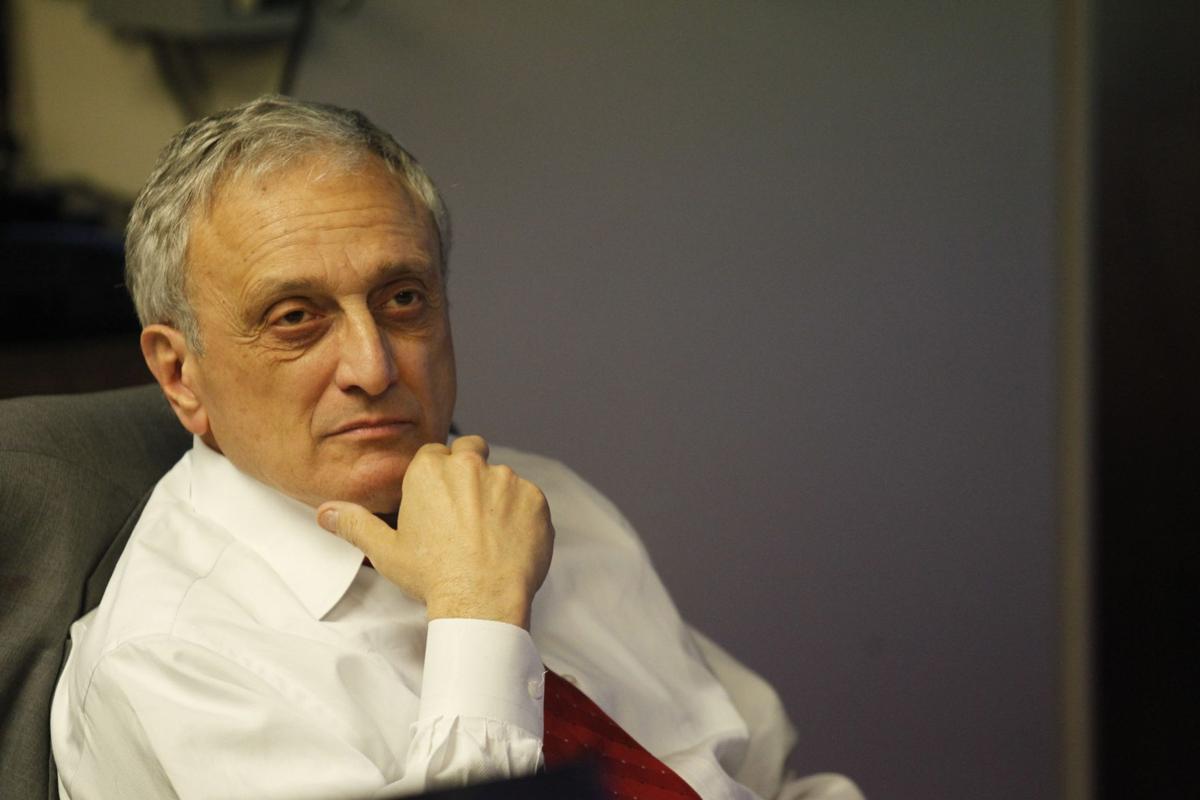 Carl Paladino says charter schools account for only 2 percent of Ellicott Development's holdings and that no other developers have charter school holdings because they are too risky an investment. (Harry Scull Jr./Buffalo News) 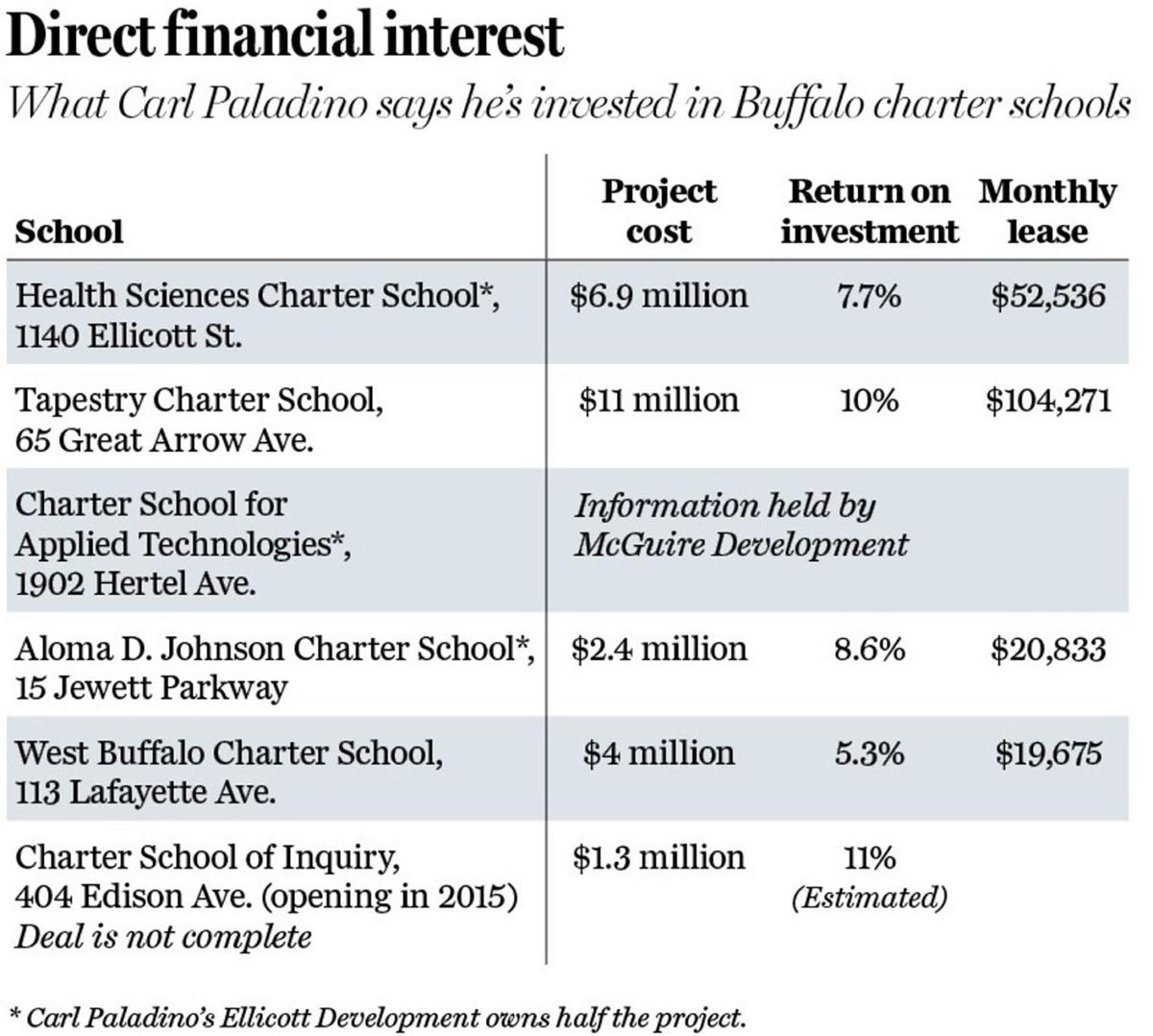 Ever since developer Carl Paladino joined the Buffalo School Board more than a year ago, questions have swirled about his financial interests in charter schools. In fact, Paladino has interests in six different charter schools in Buffalo and, undeniably, makes money on them.

But whether that means Paladino draws huge profits from charter schools or has a conflict of interest in promoting charter schools in the city is a different question altogether.

The Alliance for Quality Education, a statewide organization that advocates greater support for traditional public schools, released a nine-page report today on Paladino’s charter school interests. The report – titled “Good for Kids or Good for Carl?” – questions Paladino’s ethics and profit-taking related to charter schools. An anti-Paladino and anti-charter school rally is planned at City Hall prior to tonight’s regular board meeting.

“The profit motive is a powerful force,” said Billy Easton, executive director of the alliance, “and Paladino has a clear conflict of interest. He could abuse his power for personal gain.”

In response, Paladino spent several hours with The News answering questions and reviewing his financial files on the charter schools in which he has a partial or full-ownership stake: Tapestry, Applied Technologies, West Buffalo, Health Sciences, Aloma D. Johnson and Charter School of Inquiry, which is slated to open next year.

He said charter schools account for only 2 percent of Ellicott Development’s holdings and that no other developers have charter school holdings because they’re too risky an investment. Charter schools are only guaranteed a life span of up to five years before they must apply to the state for a charter extension.

By Paladino’s own accounting, he has invested well over $20 million in project costs for these schools over the past five years.

He said he has made deals with charter schools because he believes in them and only seeks a return on investment of 10 percent.

“No other developer would risk their money this way,” he said, “because I’m totally insane.”

Joy Pepper, the founder of Tapestry Charter School, said her school was the first to desperately seek financial assistance from Paladino after its consultants scoured the country for loans and turned up empty in 2008 and 2009. She said charter school founders feel nothing but gratitude to Paladino for giving them a chance when no one else would.

“Without him, I can’t even tell you where we’d be,” she said.

The issue raised by the Alliance for Quality Education is whether Paladino’s charter school investments make it impossible for him to ethically vote on charter school issues.

“Who’s to say what future schools he’ll have his fingers in?” Easton said.

Paladino said he will recuse himself from charter school votes in which he has a direct financial interest but will not forfeit his right as a board member to vote on other charter school matters.

The alliance report points out that Paladino has received $685,000 in sales and mortgage tax incentives from the Erie County Industrial Development Agency. It also contends that in the case of Health Sciences Charter School on Ellicott Street, Paladino’s willingness to redevelop a rundown building as a school led to an increase in property values for his remaining property holdings in the same neighborhood.

Paladino responded that the report misrepresents facts. The report also does not include construction-related costs and debts incurred by Paladino’s company, which could provide a clearer picture of project profitability.

Ellicott Development is a privately held company, and Paladino said he has no desire to openly share such information when he believes it will be misrepresented. However, he did review charter school financials with two Buffalo News reporters Tuesday. He did not have information for Charter School for Applied Technologies because those transactions were handled by investment partner McGuire Development.

Here are some key points from Paladino:

• In general, Paladino sought a 10 percent return on investment, which he described as low. In the case of three schools, higher-than-expected project costs led to investment returns of less than 10 percent.

• All mortgage and sales tax breaks awarded by the Erie County Industrial Development Agency lowered project costs and were passed on as savings to the individual charter schools. Subsidies were not kept by the company. As nonprofit schools, charter schools pay no real estate taxes.

For more on this story and to view a copy of the AQE report, visit the School Zone blog.

The Williamsville Central School District for now is paying two people a $230,000 salary to fill the job of school superintendent: Scott G. Martzloff and John E. McKenna, who has taken Martzloff's place on an acting basis.

Far from staring at computers or spaced apart in an indoor classroom, Aurora Waldorf School students are immersed in nature, with classes held outside most of the time.

While inequity – long rooted in race, segregation and socioeconomics – has plagued education for decades, experts fear the problem has grown worse during the eight months since the pandemic began and shifted learning online.

"We're in mid-October and still no solid plan as far as getting our kids back to school," said one West Seneca mother of two.

Houghton College to slash tuition in half for 2021

Houghton is now the third college in Western New York in recent years to do what is known in the higher education industry as a tuition reset.

The number of students in Erie and Niagara counties who began the school year as home-schoolers rose 53% from this same time last year, according to figures compiled by The Buffalo News.

Questions grow about return to classroom in Buffalo, students 'falling through the cracks'

The awards, in their 21st century form, typically involve a celebration that honors Buffalo's highest achieving eighth-grade students. This year's event will be a virtual one.

The Williamsville School Board held a community forum Saturday that was far less antagonistic than sessions held in recent months.

No Covid spread within schools in Erie and Niagara counties, health officials say

More than a month since classes started, there is no evidence that Covid-19 has spread within the schools, Erie and Niagara County health officials say.

Carl Paladino says charter schools account for only 2 percent of Ellicott Development's holdings and that no other developers have charter school holdings because they are too risky an investment. (Harry Scull Jr./Buffalo News)