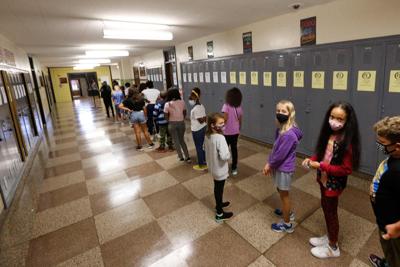 It started out damp, and there were a few delays, but by Wednesday, students throughout Western New York had walked through the doors for their first day of school.

"It was refreshing today. Despite everything going on in the world, I feel like today was more of a fresh start since I've felt since the beginning of 2019," said Alycia Sawyer, said after dropping her two children off at Boston Valley Elementary School in the Hamburg Central School District.

It's a sentiment felt throughout the area, even if everything did not go smoothly. Buffalo had some delays caused by the nationwide bus driver shortage and by health checks at the door.

"When we’re gathered here today on a day like this so special, after 18 long, hard, difficult months, for all of us, we are filled with joy, we are filled with gratitude that we are here today," Buffalo Public Schools Superintendent Kriner Cash said as he marked the first day at Buffalo Academy for the Visual and Performing Arts.

Buffalo reduced the number of bus routes to account for a shortage of 150 bus drivers this year. And Wednesday, there were 30 drivers who did not report to work, Cash said.

"We had the other 480 drivers drop their children and then the drivers went back to pick up the children," he said. "Parents were informed there were driver shortages."

And when they got to school, some students encountered long lines outside as they waited to enter the buildings. Cash said that was probably due to the health screening.

"They have to get their temperatures checked through a scanner. Some schools are more efficient at that," Cash said. "But this is the first day, so we're pressure testing that system as we go through."

Parents picking up their children up from Frederick Law Olmsted Elementary School Wednesday afternoon were generally pleased with how the drop-off went earlier in the day. The long lines and initial inconveniences were not too much of a bother, they said.

“There was just a huge long line to get into school, I think because parents couldn’t just drop their kids off," said Meaghan Tost, a North Buffalo resident, who has a pre-kindergartener and a first grader attending the school.

Holly Sinnott, a resident of the Elmwood Village who has a third grader, also agreed the morning drop-off went as well as could be expected.

“Because of the busing transportation, there’s a lot of unknowns there with the lack of drivers and shortages but, you know, it went OK. Everybody got in safely. It was just a little wait. It was expected, but I think it will get better in the next few days,” Sinnott said.

Sweet Home Central School District also brought students back Wednesday, where Laurie Crissy’s daughter, Morgan, and son, Wyatt, returned to the classroom in person for the first time since March 2020.

Morgan, a fifth grader at Glendale Elementary School, and her brother, Wyatt, who is in third grade, were so excited about going back they were up much earlier than normal.

For mom, the rain-soaked morning drop-off at the Town of Tonawanda school after so many months away was emotional.

Melissa Yourston, whose daughter, Haylie, is starting eighth grade at Sweet Home Middle School in Amherst, said she tries to remain hopeful about the school year as the Delta variant spreads.

In her banking job, she interacts with colleagues in other states. One is in a district that went into the classroom for two weeks before having to revert to remote learning because of a Covid-19 surge.

“It’s definitely a concern I have that we won’t make it through the entire school year,” Yourston said.

Still, Haylie was thrilled to go back to school Wednesday, her mother said.

“It’s a little quiet in the house this morning,” Yourston said.

Back to school took on new meaning this year, after two school years were interrupted by the Covid-19 pandemic, resulting in remote and hybrid learning.

Leilon Duff, who has a freshman and a senior at Hamburg High School, wondered about the effect being out of school for so long will have on children.

"It will be interesting to see how they learn, their sleep habits, how they work with the schedule," she said. "Last year it was a little bit of anxiousness as to how things were going to work. I'm glad they're in five days a week."

She said her daughters were excited to see their friends, although they found some positives in hybrid learning.

Her daughters wanted to be vaccinated, and the whole family has gotten the vaccine.

"I'm glad the vaccine is out there, it does give me a certain sense of comfort," Duff said. 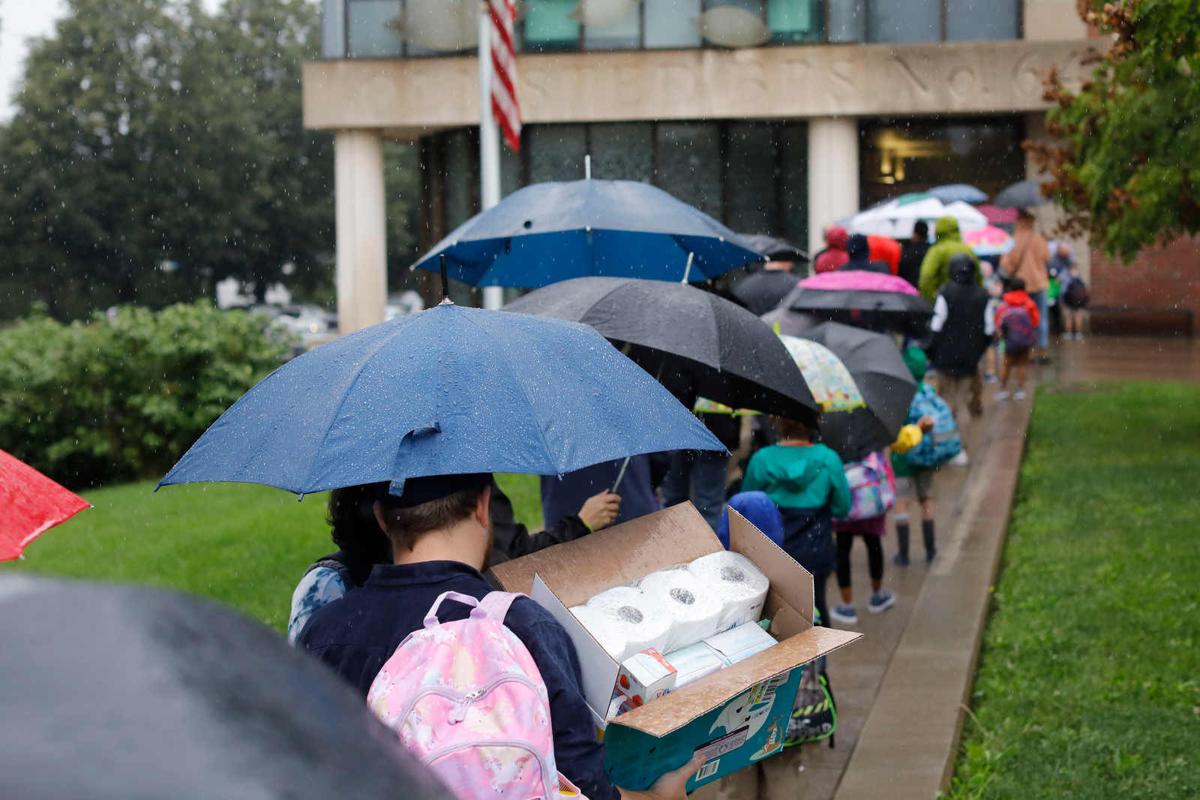 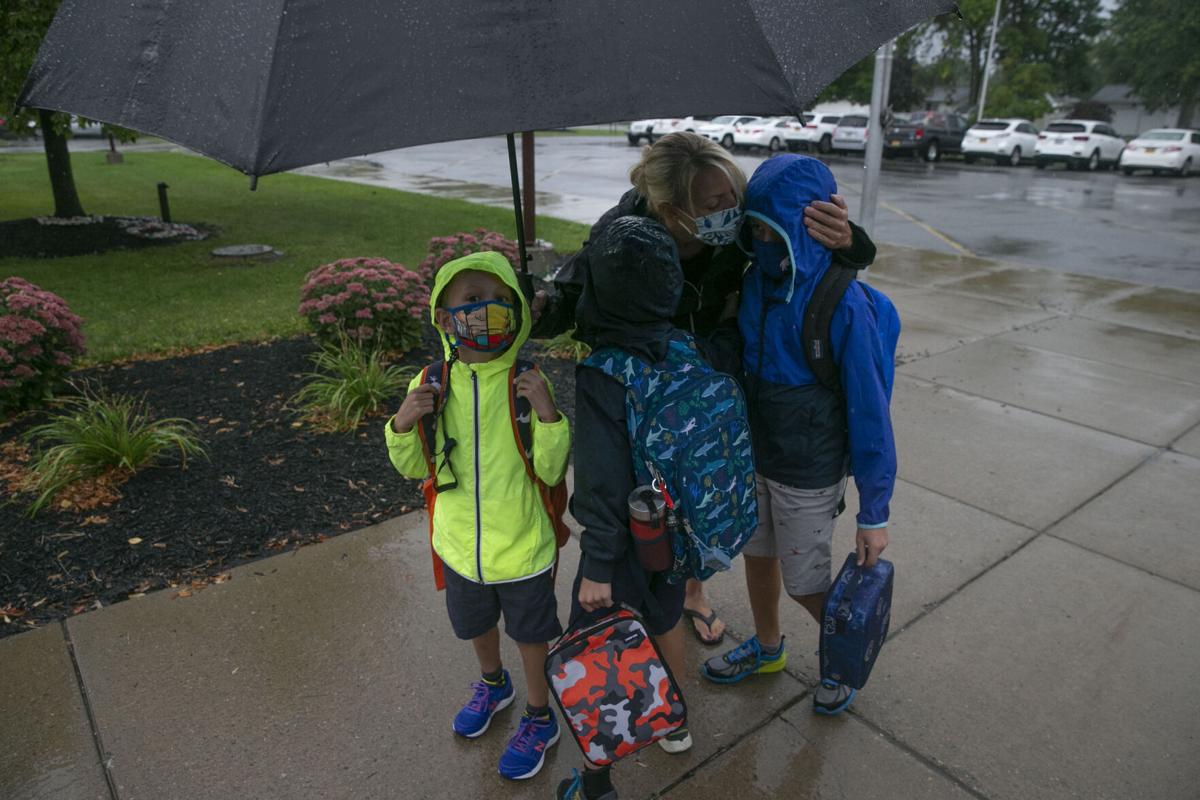 Jeannie Kornacki holds the umbrella as she hugs her children, from left, James, 5, Jack, 7, and Ethan, 8, on their first day of school at Glendale Elementary in Town of Tonawanda, Wednesday, Sept. 8, 2021. 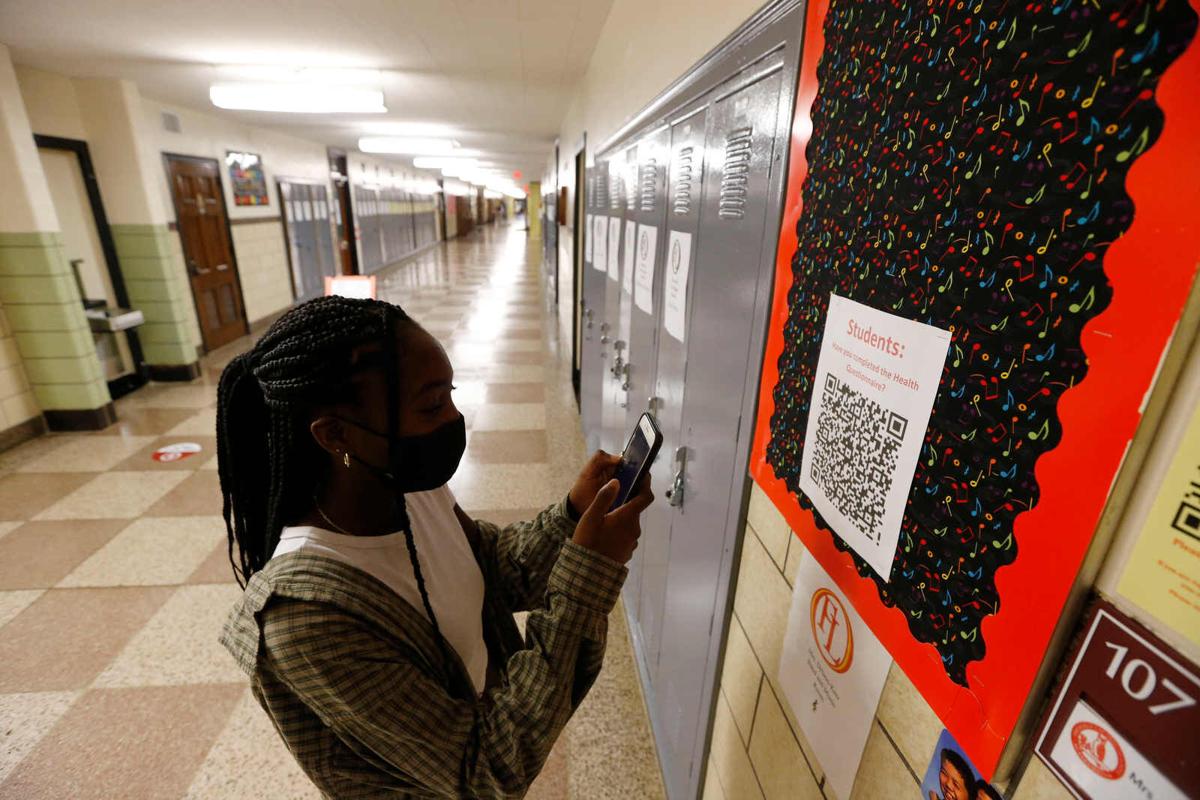 Senior Chloe Fuller, 17, uses her cellphone to take a photo of the QR code that leads to the daily Covid-19 health screening on the first day of school at PS156 Frederick Law Olmsted School, Wednesday, Sept. 8, 2021.