"It's a great day," he told the students, staff, public and school officials, friends and family in the gym. "It's always a great day to be a Griff."

In February, Stoute became the first person of color and youngest to be named president at Canisius, and he officially took the reins from John J. Hurley, who held the position for 12 years, on July 1. Saturday he donned the college's presidential regalia for the symbolic portion of the inauguration ceremony, accepting a presidential medallion and a wooden mace featuring a carved griffin, the school mascot.

In his roughly 20-minute inauguration speech, Stoute emphasized faith, love and action as guiding principles. He quoted a Bible verse on love from 1 Corinthians, referenced Jesuit founder Ignatius of Loyola and delved briefly into the 150-year history of Canisius. He paused in an emotional moment to thank his parents for "instilling" in him their faith.

Erik Brady: Steve Stoute made history at Canisius College, 54 years after a group of students changed its course

The sit-in, all those years ago, wasn’t really about making demands after all. Let history show that in the end it was much more about giving than taking, Brady writes.

"It's the only way a little boy from Arouca in Trinidad and Tobago could grow up to become elected to be the 25th president of Canisius College," said Stoute, who served as chief of staff and vice president for strategic initiatives at DePaul University prior to his selection as president of the private college on Main Street in Buffalo.

Among the elected officials who spoke in the ceremony were Rep. Chris Jacobs and Buffalo Mayor Byron Brown, while religious officials in the program were Rev. Michael W. Fisher of the Catholic Diocese of Buffalo, Rev. Thomas R. Slon of the Canisius Jesuit community and Rev. Joseph M. O'Keefe of the USA East Province of the Society of Jesus. More than 30 delegates from other colleges and universities also attended.

Stoute's address was balanced with a few humorous quips and he often flashed a bright smile, but his tone turned serious when he acknowledged a list of human crises – from gun violence to climate change to housing and food insecurity – plaguing the city and nation around him. He noted how people of color tend to suffer disproportionately in systems of criminal justice and education.

At 41, Steve K. Stoute is the youngest and the first person of color to lead the college in its 150-year history. He said his first focus will be on growing enrollment, including more students of color, first-generation college students and new Americans.

"We have lost our ability to have civil discourse in the halls of government and on our campuses with those who are different than we are," he said, "forgetting that in spite of our differences we are one human family."

In how Canisius students and staff should respond to the crises, Stoute detailed the acronym RISE, representing four goals: renewing a commitment to justice, inspiring a new generation of leaders, serving every person encountered and empowering them.

"We will by our actions rise to meet this moment," Stoute said.

Jahare C. Hudson, president of the Canisius Undergraduate Student Association and part of the class of 2024, set the stage for Stoute by extolling his demeanor during the interview process. He said that Stoute encouraged the student leadership interviewers to take their time finishing lunch before the interview, and then later called Jahare by name. Hudson said he remembered telling his friends afterward: "He is the one."

Canisius College is doing away with standardized test scores as a factor for admission to the college, removing a barrier that can put college out of reach for some students, the college announced Monday. 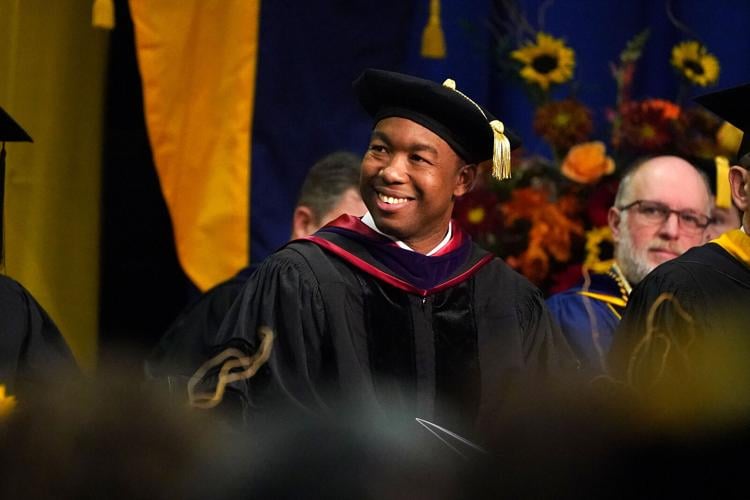 Canisius College President Steve K. Stoute smiles during his inauguration as the college's 25th president in a ceremony at the Koessler Athletic Center in Buffalo on Saturday, Oct. 22, 2022. Stoute, a native of Trinidad and Tobago, is the college's first president of color in its 152-year history. 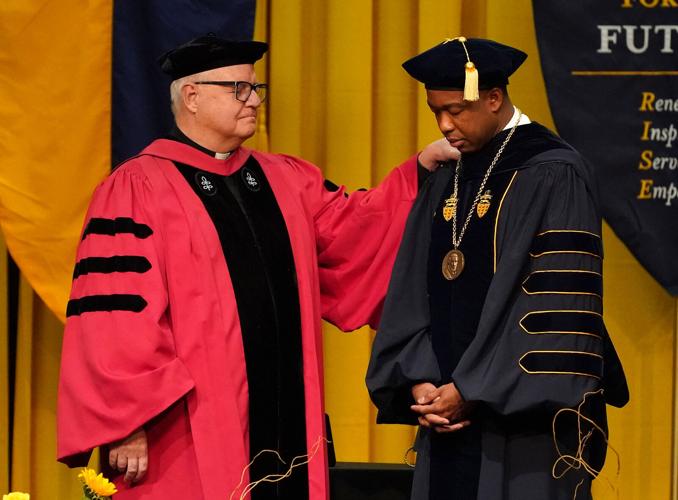 Rev. Joseph M. O'Keefe prays with Canisius College President Steve K. Stoute during Stoute's inauguration as the college's 25th president at a ceremony in the Koessler Athletic Center in Buffalo on Saturday, Oct. 22, 2022.