As Canisius hits the big one-five-oh, an appreciation of one of its founding fathers
0 comments
Share this
1 of 2 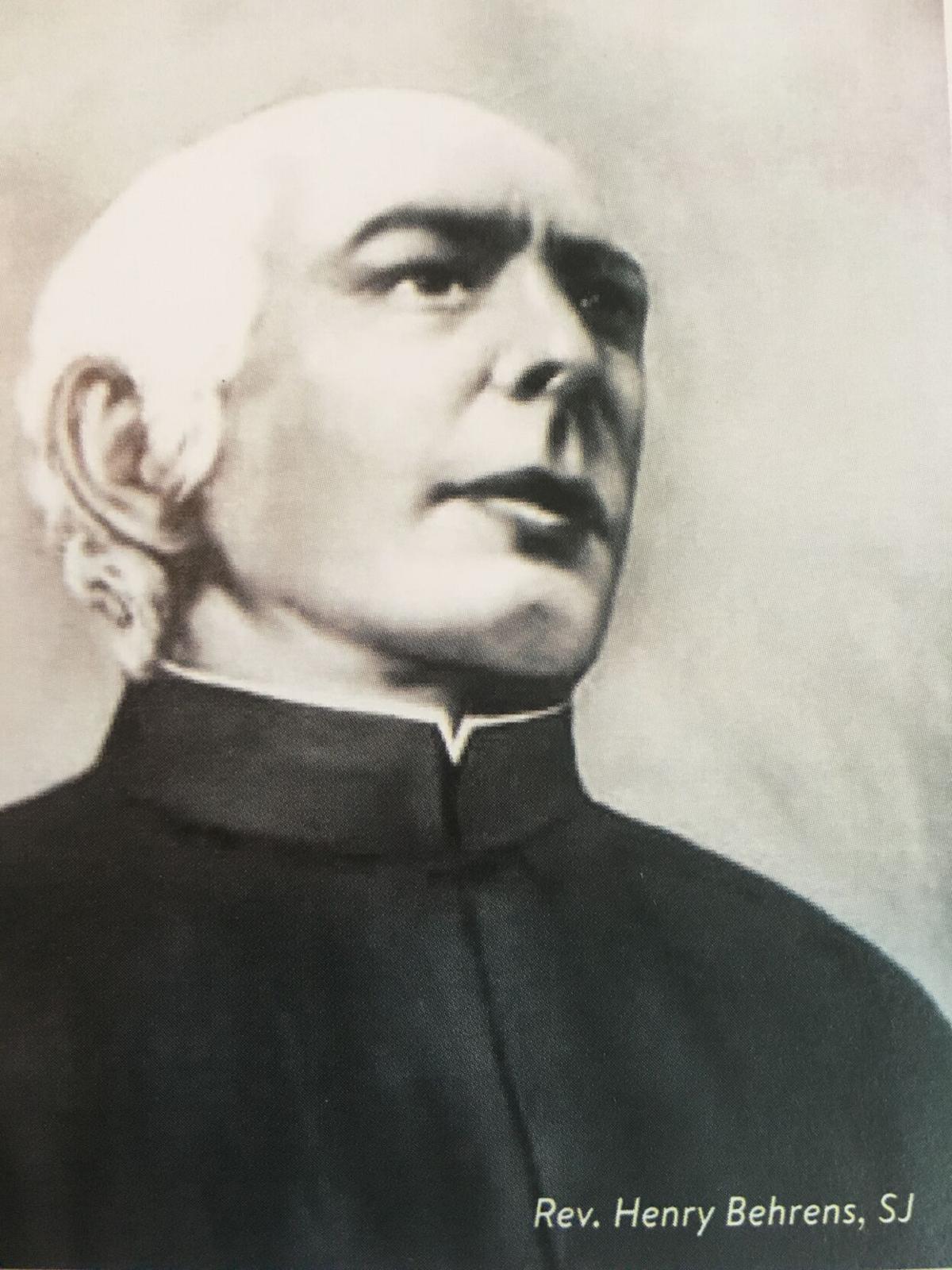 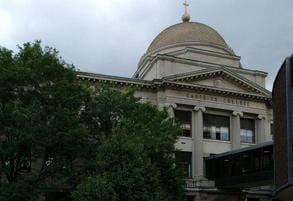 Happy Birthday to us.

I have standing to say it that way, as a graduate of Canisius High School and Canisius College, which were one and the same at the start. My late father wrote the college’s centennial history for its 100th birthday and taught English there for 42 years. He’s also the student who launched the Griffin as school mascot. And I, in turn, wore the Griffin suit in my own student days – and occasionally may have lost track of where the costume ended and the boy began.

So, yeah, it’s fair to say I bleed blue and gold.

What follows is an adaptation of a prologue I wrote for a recent college publication celebrating our 150th. Here you will learn about the Rev. Henry Behrens, a giant of Canisius history who, believe it or not, deserves a footnote in football history, too. But first let’s begin at the beginning – on Sept. 5, 1870.

Rev. Henry Knappmeyer opened the first day in Canisius history by writing “AMDG" on the blackboard, for Ad Majorem Dei Gloriam, meaning “To the Greater Glory of God,” the Jesuit motto. Next he chalked a pair of prayers, in Latin – Pater Noster (Our Father) and Ave Maria (Hail Mary) – and tasked the students with memorizing them for the following day, marking the school’s first homework assignment.

Ninety-eight years later, on my first day at Canisius High School, we had essentially the same assignment.

Hail Mary was a felicitous choice, for St. Peter Canisius himself wrote the last line of it – among the most famous words in all Christendom. The first lines come from the Gospel of Luke: “Hail Mary, full of grace, the Lord is with thee. Blessed art thou among women and blessed is the fruit of thy womb, Jesus.” The last line comes courtesy of Canisius: “Holy Mary, Mother of God, pray for us sinners, now and at the hour of our death.”

That line first appeared in print, in 1555, in a Canisius catechism. The church officially added it to the prayer in 1566 at the Council of Trent, where Canisius served as theologian. By then, he was well known for evangelizing the Catholic Revival in Germany in the face of the Protestant Reformation.

When Canisius College opened, in 1870, the Franco-Prussian war raged in Europe. Henry Behrens was there, on the front lines, offering last rites to soldiers on both sides. And this was not his first armed conflict. He pulled off an audacious wartime ruse in a Swiss civil war in 1847 – 25 years before he had come to Buffalo as president of Canisius.

During the Sonderbund War, as it was called, Behrens was prefect of discipline at the University of Fribourg, which had been founded by Peter Canisius nearly 300 years earlier, as the College of Saint-Michel. When Swiss federal troops bore down on the university, Behrens ordered the Jesuit scholastics under his care to pack up what they could of the university’s treasures. These chests contained chalices from the chapel, rare volumes from the library – and relics of Canisius, who was interred in the chapel there.

Behrens dressed the scholastics in civilian clothes and, as the anticlerical forces began looting, he suddenly appeared wearing the uniform of one of their superior officers. Behrens shouted orders “with the voice and bearing of a commander,” according to accounts of the day, and fooled the marauders into carrying the corded trunks filled with priceless artifacts to a prearranged place of safekeeping. Behrens and his scholastics escaped with the heirlooms – and their lives – in a subterfuge worthy of Hollywood.

When Behrens arrived in Buffalo, in 1872, as the second president of Canisius, he spoke no English. “In spite of his 56 years,” according to an account of his life in the Jesuit Online Library, “he began the study of English with the eagerness of an ambitious schoolboy and the determination of an old campaigner.”

He quickly learned the language and soon earned a reputation around town: “He was alike welcome in the little cottages of the laborers and in the mansions of the prominent Catholics of Buffalo.”

The college opened on Ellicott Street in 1870 and moved to larger quarters on Washington Street in 1872, just before Behrens arrived. He is the one who made a prescient purchase of the so-called Villa property at Main and Jefferson. By 1912, the college had moved there. Behind Old Main, its signature building, was a football field that is now the Canisius quadrangle. And next month it will be 100 years since the Buffalo All Americans played Buffalo’s first NFL game on that field, known in NFL record books as “Canisius Villa.”

Behrens served just four years as president at Canisius. He would go on to other adventures, including a key role in the founding of St. Ignatius College (now John Carroll University) in Cleveland. And then he turned his energy to a new calling, this time among the Brule Sioux and Oglala Sioux of South Dakota. All this was under the auspices of the Buffalo Mission, the German Jesuit province that stretched from Buffalo through the Midwest and out to the Great Plains.

Behrens returned to Buffalo in 1892 as the college’s confessor. He died there three years later, at the age of 80. In this he followed the example of Peter Canisius, who also died on a campus he loved, at Fribourg, in 1597 – precisely 250 years before Behrens’s feat of cinematic sangfroid during the Sonderbund War.

As Covid cases pop up in schools, no consensus in WNY on when to close

While the numbers are still low, even one confirmed case in a school is enough to make parents uneasy about putting their children on the bus.

Williamsville schools to announce another plan for students this week

Williamsville Central hybrid and remote-only students will be in the same classes and have the same schedule under a new plan.

Williamsville students to return to classrooms in October

Thousands of Williamsville students will be returning to the classroom two days a week in October – much sooner than planned.

When should you keep your kids home from school?

If your child has any symptoms that might be related to Covid-19, you should keep your child home from school, doctors say.

The centers are primarily for students between 5 and 12 years old and will be free for parents earning less than 85% of the state median income.

Maryvale students to remain remote until after Thanksgiving

“We’ve been erring on the side of caution,” Superintendent Joseph D’Angelo said.

Buffalo Public Schools has agreed to pay $3.7 million to a private bus company for the month of September – even though the district’s students are not riding any buses this month. But it's a different story in Maryvale School District.

Reactions were mixed Wednesday when Williamsville rolled out the latest in a string of changes to its school reopening plan: thousands of stud…

Buffalo Public Schools has agreed to pay $3.7 million to a private bus company for the month of September – even though the district’s students are not riding any buses this month. But it's a different story in Maryvale School District.

Watch now: UB will welcome 29,000 students to a campus reinvented for Covid

Watch now: UB will welcome 29,000 students to a campus reinvented for Covid

Watch now: How New York State school districts are reopening for the fall

Watch now: How New York State school districts are reopening for the fall