Last school year, large fights among Buffalo high school students were coordinated in real time on social media. Students could look up on their phones where a fight was going to happen such as University Station or a specific school, Niagara Frontier Transportation Authority officials said.

Sometimes, hundreds of students would show up, although many would venture to the site just to watch. And if the fight's location changed, as it often would, most high school students had means to get there – their Metro pass.

The NFTA has pinned the problem on 10th through 12th graders taking advantage of their all-access Metro bus and rail passes, which allowed for transportation on any city route until 7 p.m. In Buffalo Public Schools, only students up through 8th grade ride yellow school buses operated by First Student. High school students are given special student passes to ride NFTA buses or the Metro Rail.

Until fall 2019, students could only use the passes on specific routes to get directly to and from school. But that changed after parent groups fought to "open up" the contract to give students more flexibility in transportation for after-school activities.

The transportation authority and Buffalo Public Schools this summer decided to return to routed bus passes.

"The main thing is to get from school directly home," said Gary Bennett, senior transportation planner for the NFTA.

The fight over a contract for Buffalo teachers is heating up

For more than three years, the union that represents Buffalo public school teachers and the Buffalo School Board have been unable to agree on the terms of a new contract. The stress is beginning to show.

"It's not safe for your students and it's not good for our operations," Morrell remembered telling district officials. "We need to go back to putting the routing on all students."

But parent groups who fought for the open-access passes say the new policy is unfair and needs to be re-examined.

In stabbing aftermath, administration and parents push for changes to ensure safety at Buffalo schools

The NFTA's desire for a revised policy dovetailed with Buffalo Schools Superintendent Tonja M. Williams' emphasis on student safety in her first months as superintendent, prompted by violence at McKinley last year and School 355 this September. In an interview, Williams echoed stories of Metro station incidents that required additional NFTA police presence, which influenced her decision.

"Certainly when we looked at limiting the NFTA passes for children, we didn't just decide that haphazardly," Williams said.

Both district officials and the NFTA will make sure that students who need transportation for after-school activities or to get to a job will be accommodated – and those mechanisms already exist. 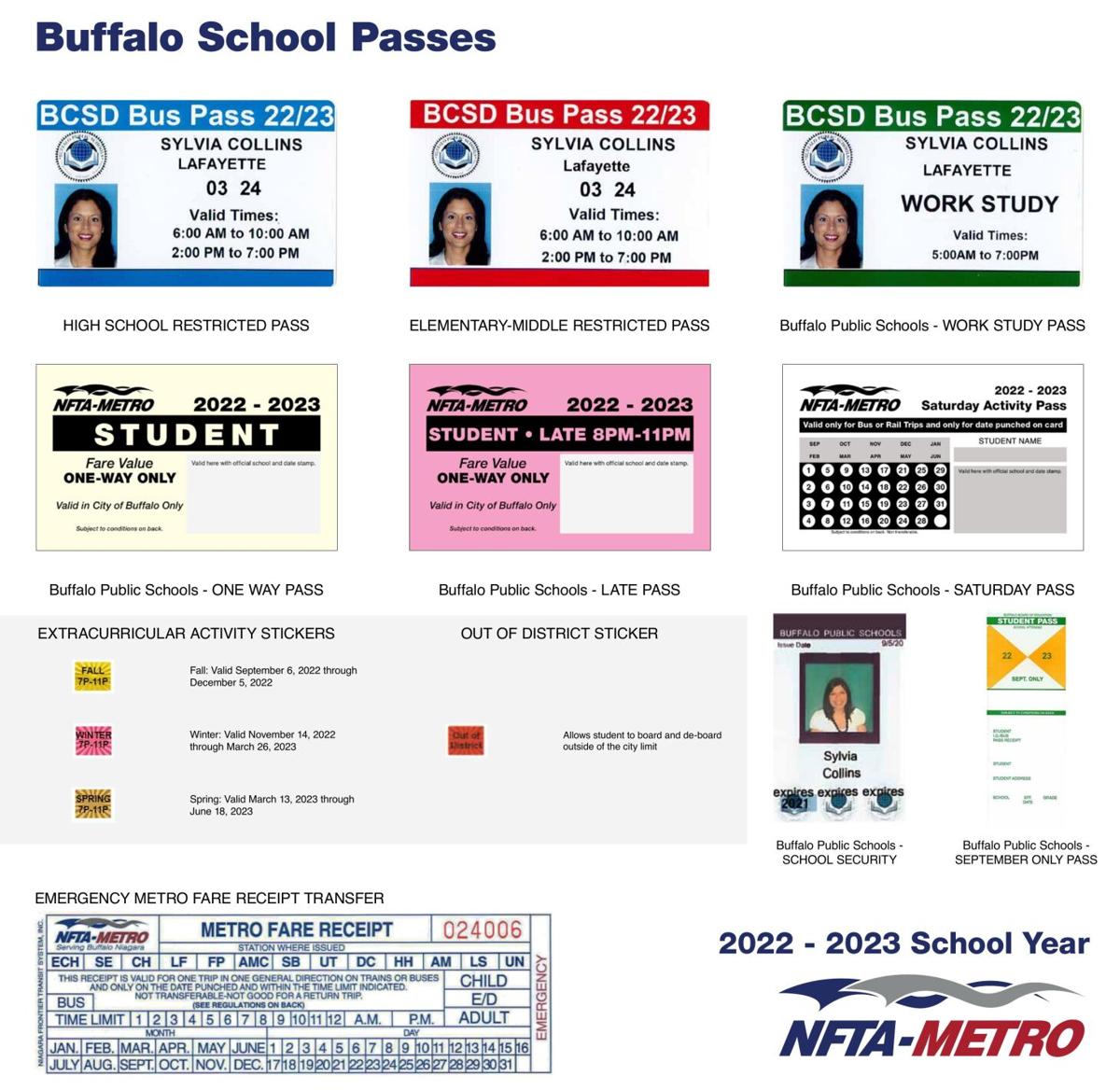 Among the options are extracurricular passes that expire at the end of an athletic or activity season, work-study passes, one-way passes, Saturday passes and McKinney-Vento stickers for students who shuffle between temporary residences. Williams said the student has to show "evidence of need."

"It still gives them a lot of freedom as far as if they need to go to school-sanctioned events," said Bennett.

But even with opportunities for employed students and student athletes, parents dispute the philosophy behind limiting transportation passes.

"This is a knee-jerk reaction by the district," said Sam Radford of We the Parents and a member of the Operation Sunrise Transportation Committee that the district has assembled to confront other transportation issues. He did not think the district and NFTA had given the all-access approach enough of a chance.

The bigger-picture problem, said Jessica Bauer Walker of the Community Health Worker Network and the School Health and Wellness Collaborative, is the lack of trust in – and heavier policing of – students.

All but one School Board member approved the motion, with an overwhelming sentiment that an outside-the-box solution must be attempted with some urgency.

"The vast majority of students are using their bus passes responsibly for getting to where they need to go for family, education, work and other activities," she said. "Transportation access and mobility justice should be a part of BPS' stated commitment to equity."

In 2017, Keith Jones, transportation committee chair for the BPTO, joined now-school board member Larry Scott in an effort for greater Metro access for students. Jones said last week his reasons for pushing for the change remain valid.

"The best thing would be to start with all-access passes and then go to routed passes if a student gets in a fight," Jones said. "There has to be compassion in whatever they're doing." He said the onus is on NFTA security officers to break up fights, which he said are inevitable regardless of bus policy. 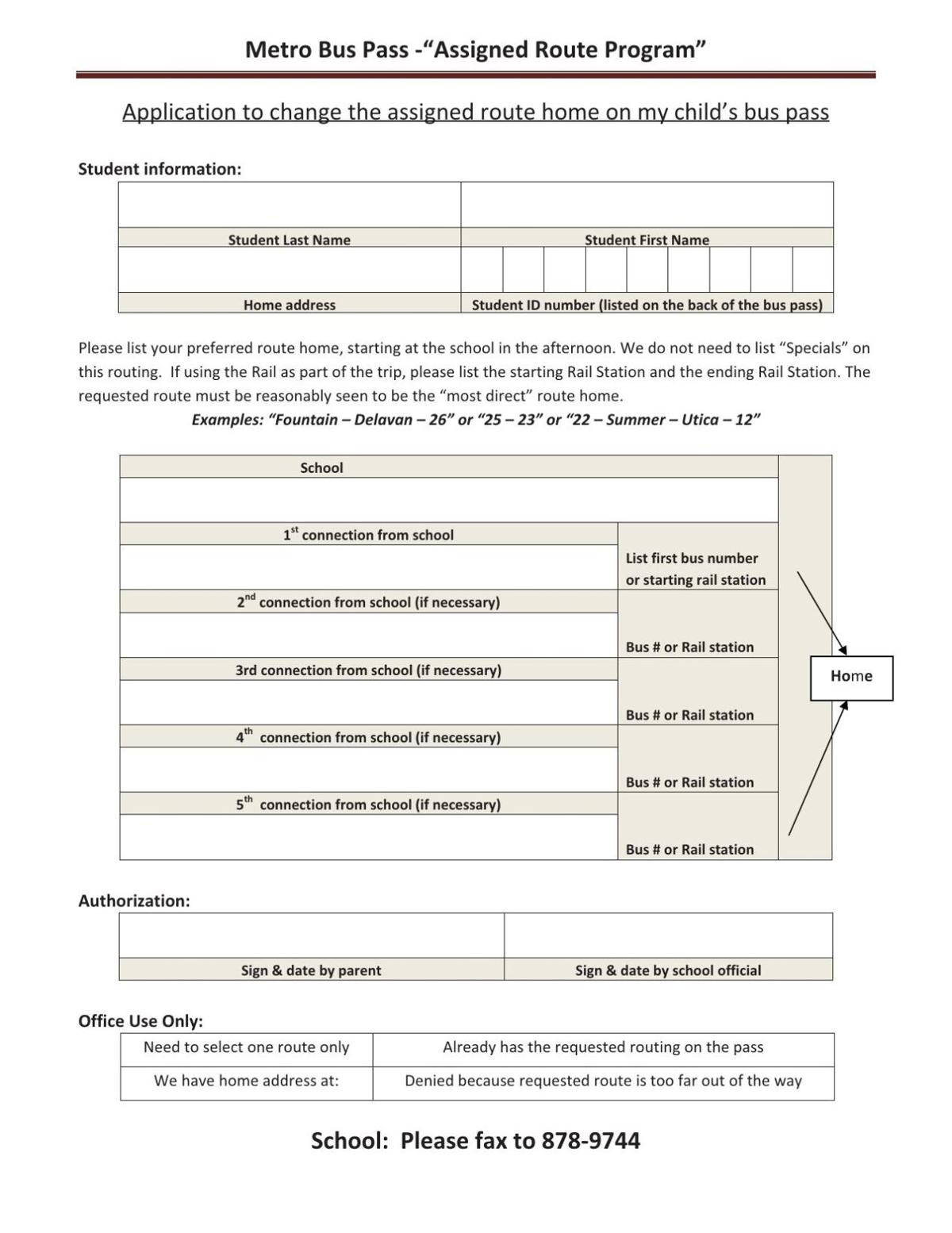 Radford, Jones and BPTO members cited reasons why the all-access pass was sensible. They noted the variety of family structures in the district, where a student might have to travel to an aunt's house on Tuesday but a grandmother's across town on Thursday. Should a student want to visit a family member in the hospital or go grocery shopping to help out after school, they would need to complete paperwork to announce the change, and the district would have to turn it around quickly to accommodate.

The NFTA has announced plans to improve Bailey Avenue bus service, now covered by the #19 Metro Bus route, so that it meets the highest industry standards for modern transit. Part of the plan is to pursue funding for "bus rapid transit," or BRT.

Jones said the routed approach could jeopardize students' safety in other ways. If a student had a past incident with someone along their prescribed route, they would still need to take a reasonably direct path home. Jones added that gang territories or other dangerous areas might play a role in a student's choice of buses. "It's like sending children to the mouth of the lion," Jones said.

Patterson, the NFTA police chief, said he rode public transportation this month from University Station to Fountain Plaza to gauge the passenger experience. It's still early in the school year, but he's seen improvement. He thinks the routed approach is working.

"There's a level of order that's much more manageable and there's a noticeable reduction of fighting," he said.

Despite the change, Morrell did not think much had been taken away from the city's high school students.

"They haven't lost freedom. They still have access," he said. "What is missing now is the responsibility for them to behave as a whole, not as an individual."

While suspensions have gone down slightly since 2015, according to BPS data, there still are a disproportionate number of Black, multiracial and Native American students suspended, compared to white students.

Safety measures added after McKinley High fights; BPS says 'students are not out of control'

The district's aim is to adjust school start times, primarily for K-8 schools, to allow bus drivers enough time to complete two routes in the morning as opposed to the conventional one.

Back to school is back to 2019, just with fewer buses and more security

Another thing students and staff will notice is an intentional focus on the mental and emotional wellness of students.

New study: Mars used to be a giant ocean

New study: Mars used to be a giant ocean