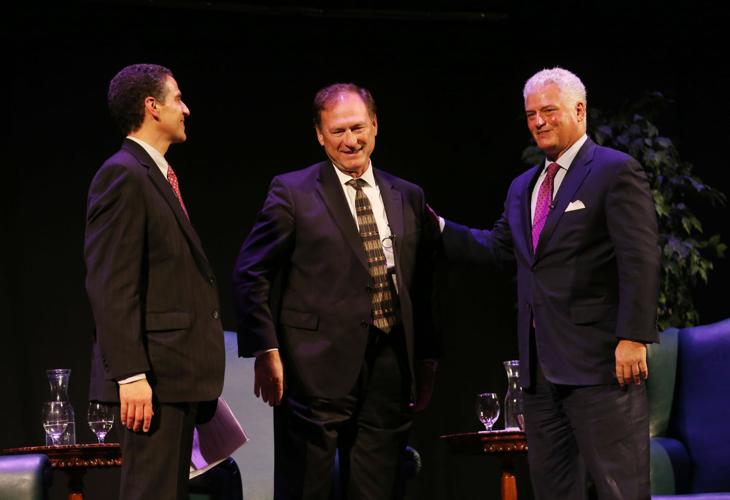 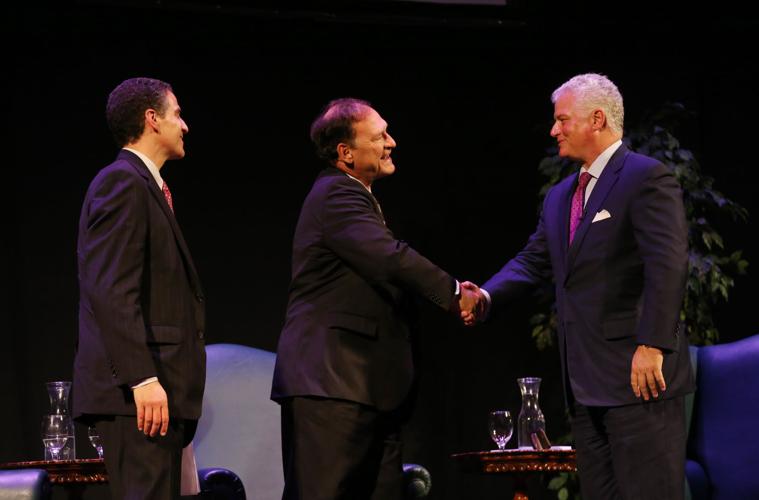 Oral arguments before the Supreme Court “would become more of a show for the audience” than an aid for the justices in their deliberations, if cameras were allowed inside the court, said Associate Justice Samuel A. Alito Jr.

Alito, speaking Thursday to an invite-only crowd of about 750 people at Shea’s Performing Arts Center, said allowing cameras into the federal courts would be a mistake because it would change how people act in the courtroom.

“I don’t think anyone behaves the same way when he or she knows that television cameras are running,” he said. “The temptation to produce a sound bite for the media is overwhelming.”

Alito, invited by the University at Buffalo Law School, spoke for an hour in a question-and-answer format with Interim Law School Dean James A. Gardner and Daniel C. Oliverio, chairman of the Hodgson Russ law firm.

Now in his 10th year on the Supreme Court, the former federal prosecutor and Court of Appeals judge weighed in on a wide range of topics, including how he writes decisions, the state of the judicial nomination process and how the pursuit of the American dream has changed since his grandparents arrived here as Italian immigrants.

Wearing a dark suit, Alito sat in a leather wingback chair on the Shea’s stage between Gardner and Oliverio, who alternated in asking questions.

When asked whether he ever writes decisions with posterity in mind, Alito said he doesn’t think about trying to earn “praise from some group” in the way he crafts a decision.

“And actually, I think it’s dangerous for judges to think too much about that. Sometimes I’m asked what would you like your legacy to be? I think it’s really bad for a judge to start worrying about that,” he said. “We’re supposed to be independent. We should be independent not just from overt influences that you might think of, but also from more subtle influences - wanting to be thought of well by any group that you might name, by media, the legal academic community, by history. If anybody remembers us years from now, what will they think of us? I don’t think we should think about that. We should do our job the way we think it should be done and be satisfied with that.”

On the Supreme Court nomination process, Alito described it as “almost guaranteed to be miserable” for nominees, because of differing interpretations by the president and the Senate as to how nominations should proceed.

“The problem is that the Constitution does not spell out in any unequivocal way what the division of authority is between the president and the Senate” when it comes to the appointments, said Alito. He did not specifically mention the Senate’s current refusal to act on President Barack Obama’s nomination of federal court Judge Merrick Garland to the Supreme Court. But he said that future nominees should expect to be caught between two unbending forces. “Unfortunately, I can’t say I’m very optimistic that it’s going to change anytime in the near future,” said Alito.

Neither Gardner nor Oliverio asked Alito about how the court’s current makeup of eight justices has affected their deliberations. Obama nominated Garland in March to fill a vacancy caused by the death of Antonin Scalia, but the Senate has declined to hold any hearings on the nomination. The next justice could be a swing vote on key cases for a court that sometimes has been divided along political lines in major rulings.

Alito downplayed the division, noting that he and Scalia, both of whom were nominated by Republican presidents and are considered conservative jurists, agreed on 54 percent of cases, while he and Justice Elena Kagan, who was appointed by Obama, a Democrat, agreed on 58 percent of cases.

“The point I’m making is that on many cases we agreed, and we often agree with justices who are not identified as being in the same ideological camp. It varies a lot from case to case,” he said.

Alito acknowledged a “pattern of 5 to 4 decisions, and often along fairly predictable lines” in a relatively small category of cases where the law is not clear and where lower courts in different parts of the country have come to conflicting conclusions.

Nonetheless, he said, the split was not due to politics.

Mickey H. Osterreicher, general counsel for the National Press Photographers Association and a UB Law School alumnus, said after the session that “all the empirical evidence goes against” what Alito surmised would happen if cameras were allowed in federal courtrooms.

In state courtrooms where cameras are allowed, said Osterreicher, the participants “just forget that the cameras are there.”

Aaron W. Salter Jr., the retired Buffalo police officer and Tops security guard who was killed in Saturday's shooting, will receive posthumously a Bachelor of Arts degree from Canisius College on Saturday, a school official said. The diploma will be accepted by Salter's son, Aaron W. Salter, III, during the 10:30 a.m. undergraduate ceremonies held in the Koessler Athletic Center.

Normal lesson plans were thrown out, and the past week was spent dealing with students' feelings and trying to heal children from pre-K to 12th grade. Teachers will take time to listen to students this week, too.

The son of the security guard killed in the May 14 Tops shooting accepted a diploma posthumously awarded to his father at Saturday's commencement at Canisius College.

There was no question that school budgets were a big winner on Tuesday, as every proposal in Erie and Niagara County passed, as did 99 percent of spending plans across the state. National political issues did not score anywhere near the same kind of resounding victories in Western New York school board elections Tuesday, but candidates challenging incumbent school boards and administrations did make some inroads.

While schools are dealing with sadness and anger, they also are trying to calm the fears of parents, students and staff, and a community still dealing with the tragedy at home.

The budgets won – and national politics lost. Voters in school districts in Erie and Niagara counties Tuesday for the most part rejected candidates running on issues related to pandemic restrictions and subject matter taught in schools that have divided school boards in other parts of the country.

Two write-in candidates will be sworn in to the North Collins School Board in July. Jennifer Pisa received 56 votes and Jessica Horton got 49 votes, according to district clerk Kathy Mason.

What's on the ballot in your school district?

Here is information on the proposed budgets, tax levies, propositions and candidate elections in suburban and small city school districts in Erie and Niagara counties.

Two new board members will be elected Tuesday, and voters also will weigh in on the proposed $114.66 million budget, the purchase of buses and a $114 million capital improvement project.