Tensions have been quietly brewing within the local medical community over returning students to the classroom full time.

On one side is Erie County’s health commissioner, Dr. Gale Burstein. Week in and week out, she cautions parents and school districts about filling up classrooms amid a rise in Covid-19 cases, particularly among school-age children. The last full week of March, for instance, schools reported a record 504 cases – all students.

“Our office of epidemiology school team received 470 Covid-19 reports of K-12 students this week through Thursday afternoon,” Burstein said Friday. “This signals that we will have our highest weekly total ever this week for Covid cases in schools.”

On the other side are a group of local doctors – pediatricians, emergency room physicians, epidemiologists, child psychiatrists. They have emerged in recent weeks to push back against the commissioner’s message with one of their own: Kids need to be back in the classroom five days a week.

The research shows that there’s low risk of transmission in the schools when masking and proper protocols are taken, said Dr. Rebecca Schaeffer, a child and adolescent psychiatrist.

That, she said, is the message that hasn’t been coming through.

“Even when there are a lot of cases, we know that – for the most part – they are not catching it in the classroom environment,” Schaeffer said.

“The CDC says it’s low-risk. The American Academy of Pediatrics says it’s low-risk,” Kuwik said. “I don’t know why Erie County, N.Y., somehow thinks they know something that the CDC or the AAP doesn’t know. That has been very frustrating.”

Schaeffer and Kuwik are among the organizers of an ad hoc group called Physicians for Safe and Open Schools. The group went public last month when it took out a half-page ad in The Buffalo News with the names of 52 local doctors from across fields of medicine hoping to lend their voices to the conversation.

“As physicians, we felt that we have a lot of data now and a lot of research out there about schools that have been operating for a while in person and doing it successfully,” said Dr. Samantha Bordonaro, who specializes in emergency medicine.

“Maybe we can be a voice to help and support that effort in a way that’s driven by data,” she said.

The doctors are also raising awareness about what a year of interrupted learning has done to kids, a topic they feel has been missing from this conversation.

They describe a rise in teens and preteens coming through their offices and clinics seeking treatment for a host of mental health issues: Anxiety. Depression. Eating disorders. Even thoughts of suicide. They blame the isolation of remote learning and inconsistency of two to three days a week in the classroom.

“There is anxiety related to the fear of Covid, but there is also a complete loss of everything that makes daily life predictable,” said Dr. Laura Benedict, a psychologist. “That just creates an incredible amount of anxiety.”

The debate flared again last week after the state followed recommendations from the Centers for Disease Control and Prevention and loosened the social distancing guidelines in classrooms from 6 feet to 3 feet, depending on the grade level and rate of infection in the community.

That will allow districts to fit more students into a classroom and start returning at least some kids five days a week before the end of the school year. Students, generally, have been attending in person only two or three days a week because schools don’t have the space to fit everyone while keeping the required 6 feet of distance between them.

But Burstein urged schools to exercise caution before deciding whether to expand in-person instruction, citing a surge in Covid cases among school-age children and a higher rate of positive testing among those under 18 compared to Western New York as a whole.

Q&A: When will children return to school five days a week?

Schaeffer is concerned that message to the public has lacked context and specifics.

“The frustration I have is the mention of the 200 to 300 cases per week coming out of the schools, but there’s not a focus on just how many of those cases are actually being transmitted at school,” Kuwik said.

“The message to the public is that schools are unsafe,” Kuwik said, “but the messaging should be that with safety measures in place schools are a low-risk for transmission.”

The doctors last month pressed the county Health Department on how many cases actually have been attributed to in-school transmission. At the time, they were told 17, Kuwik said.

“Seventeen kids getting it in schools is not a reason to keep kids out of school,” Kuwik said.

The Buffalo News reached out to Burstein for comment and she responded in a statement from a spokeswoman.

Schools in Erie County reported 122 Covid cases on Wednesday and 115 cases on Thursday, a reflection of “strong and sustained community Covid-19 transmission,” Burstein said. She also noted higher positivity rates among the 20-29 and 30-39 age groups – typical ages for parents of school-age children.

But the commissioner did note “the relatively low risk of in-school transmission” thanks to two factors: schools following the recommended guidance and the county’s epidemiology team working with the school staff to contact trace and quarantine students and staff who were exposed.

In cases where they did find in-school transmission, either masks were not being worn properly or someone came to school or their team experiencing symptoms. Or, Burstein added, the 6-foot distancing rule was breached – which would explain her caution to schools about moving to 3 feet.

Some of the doctors did have a Zoom call with the health commissioner and staff to express their concerns.

“It was a very respectful phone call. They heard what we had to say,” Kuwik said. “We obviously have different thoughts.”

It’s not to say the doctors are dismissive of the rising cases.

In fact, Schaeffer agrees sports appear to be a problem, at least in circumstances where teammates are not wearing masks while carpooling or hanging out together off the field.

“We should be prioritizing classroom over sports," Schaeffer said. "But if kids are allowed to play football, shouldn’t we be ensuring that they have equal access to math class?”

The doctors are also trying to raise a red flag about the number children seeking help for mental health problems since the start of the pandemic.

“There is no question that kids in our community really are struggling with this pandemic,” Benedict said. “The lack of their engagement in school is certainly what is coming up repeatedly over and over and over again as we meet with these kids.”

Dr. Dalinda Condino, who specializes in adolescent medicine, sees it. There has been a significant jump in referrals to her office for eating disorders among youth. Kids have less time with their traditional support groups, leaving more time for social media and to focus on themselves, she said.

And Dr. Tara Petroski, who specializes in pediatric emergency medicine, sees it. Anecdotally, she has noticed more kids being admitted for psychiatric evaluation as well as more for trauma, because when they weren’t in school they were out doing things they shouldn’t.

“I’m seeing a huge number of kids coming in and they’re depressed,” she said. “They’re trying to get counseling and they can’t because the counselors are overwhelmed.”

I cover education for The Buffalo News, where I have been a reporter since 1993.

“We thought getting out, getting folks together, was the first step in the healing process,” said Brian Archie, who helped organize the walk. “We have to come back to normalcy, little steps at a time.”

Frustration grows with Health Department's approach to schools and the pandemic

After a year of heeding the advice of health officials over how to handle Covid-19 in schools, some parents and school officials are increasingly pushing back against that advice.

Gov. Andrew Cuomo said social distancing, the wearing of masks, temperature screenings and all other health and safety protocols remain in effect as some restrictions on capacity are lifted.

The Editorial Board: Burstein needs to have some flexibility on safe ways to reopen schools

"Medical guidance can evolve over time when new facts are found," writes The News' Editorial Board.

Among students in grades nine through 12, 56% have accepted an invitation to return to the classroom amid the Covid-19 pandemic.

Q&A: When will children return to school five days a week?

It looks like elementary school students have the best chance of returning to the classroom five days a week before the school year ends.

Judge Emilio Colaiacovo said he wants a decision from the state on what type of social distancing is recommended – 3 feet or 6 feet – by April 20.

Elementary school students in the Williamsville School District will have the option of returning to the classroom in person five days a week, starting April 26.

Stimulus money for schools is a gusher in Buffalo. Not so much in the suburbs.

Nearly $400 million is headed to local public schools under the American Rescue Plan. That's an average of $2,870 per student in Erie and Niagara counties. Some districts, though, will receive only about one-tenth that much.

Students accounted for four out of five of the 220 new cases that public schools in Erie and Niagara counties reported on Monday. 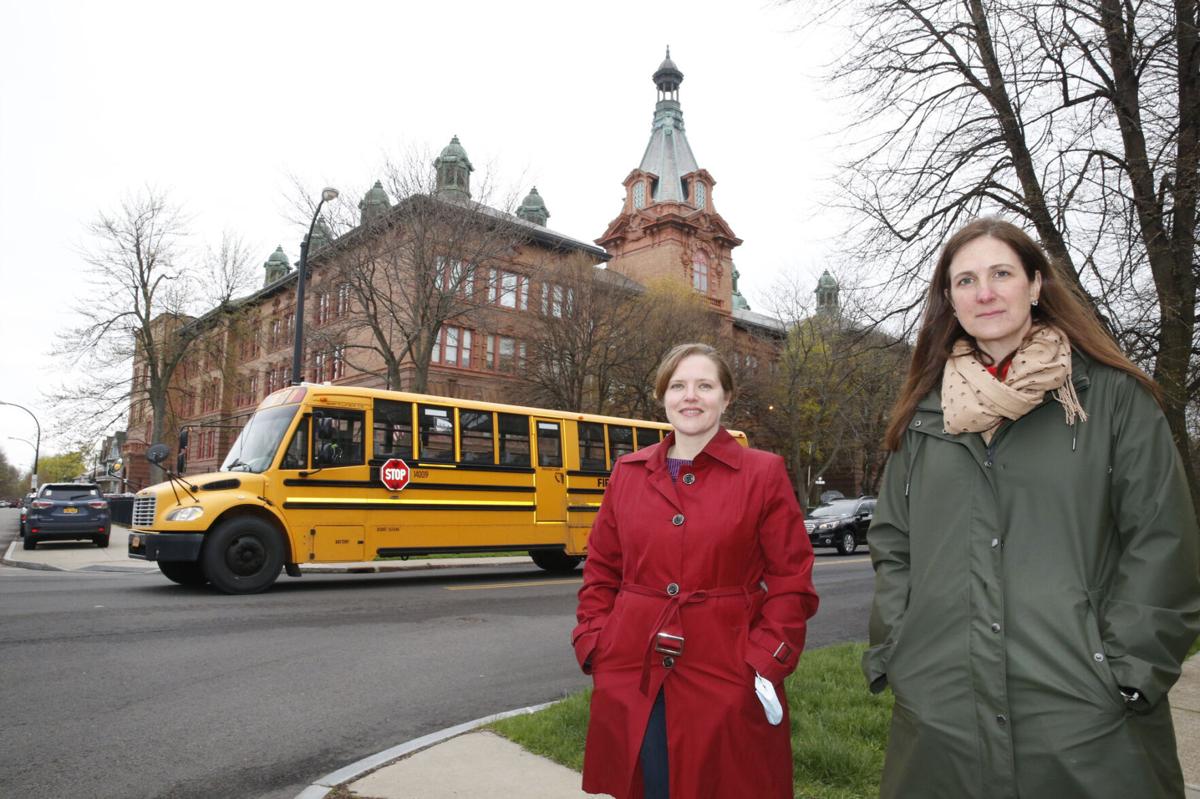 Dr. Rebecca Schaffer, left, a child and adolescent psychiatrist, and Dr. Lauren Kuwik, an internal medicine and pediatric physician, are among a group of doctors calling for schools to reopen. 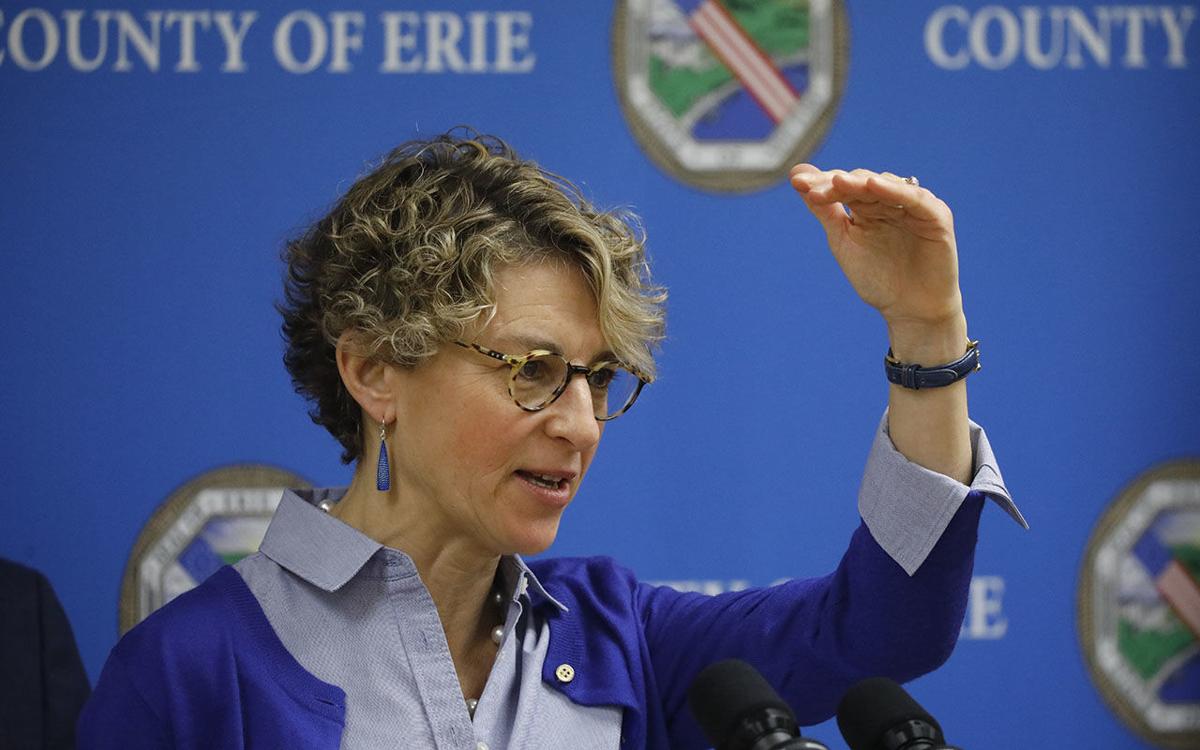