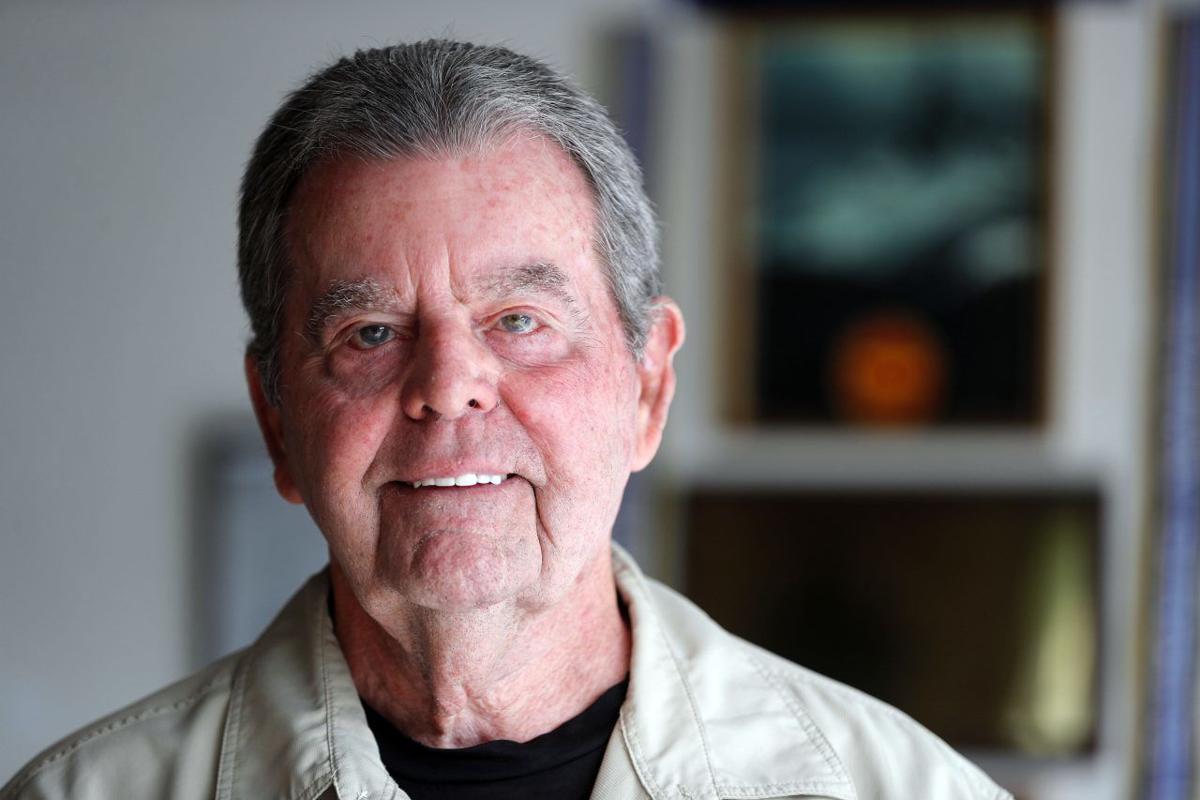 U.S. Navy veteran Gary Bauer, who served on the USS Essex aircraft carrier during the Cold War era, at his home in Orchard Park on June 5, 2019. (Mark Mulville/Buffalo News) 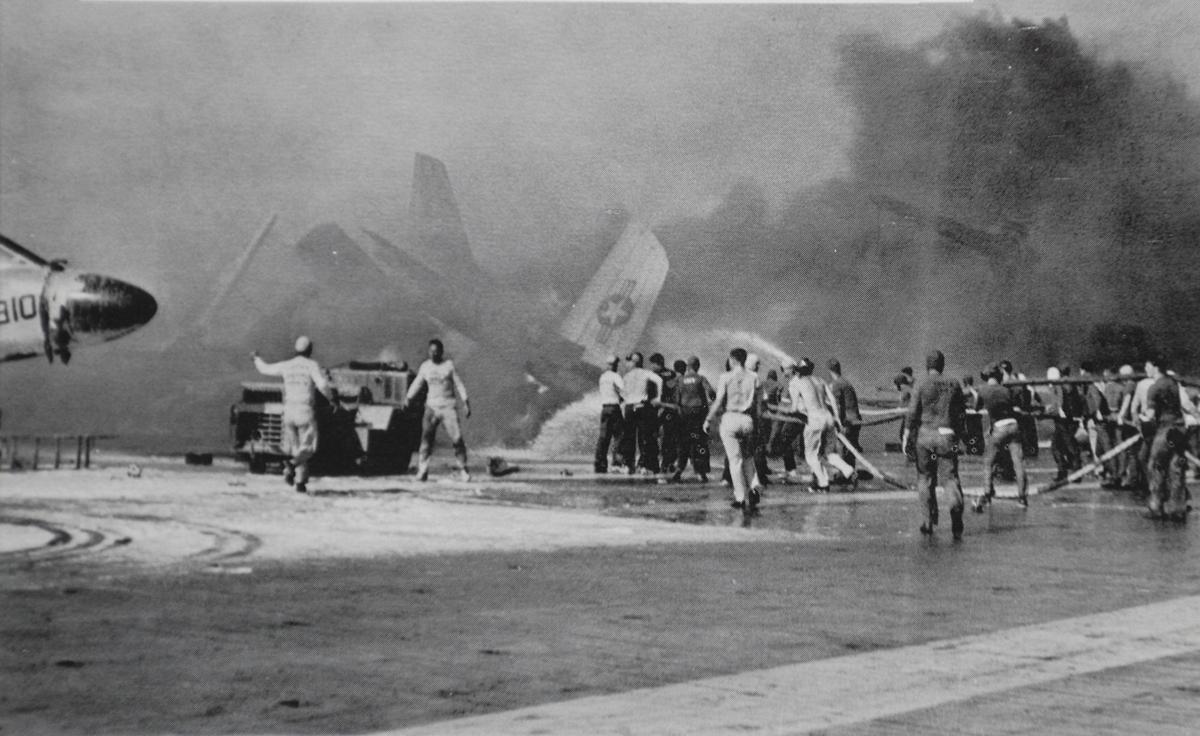 A photo of the May 1959 fatal crash of a jet on the USS Essex aircraft carrier's flight deck, causing a fire. (Provided by Gary Bauer)

Father and son were on a fishing trip along the shores of Lake Ontario in 1957 when 17-year-old Gary A. Bauer caught his dad's attention.

Bauer had left Hutchinson Central Technical High School without a diploma and was dismayed when he learned a local plant would not consider hiring him until he turned 18.

The possibility of being drafted into the Army or Marines and pulling endless guard duties at some far-flung military installation seemed beyond boring to young Bauer.

“So while we were fishing, I told my father that I had enlisted in the Navy,” he recalled.

Allen Bauer expressed surprise. Parental signatures were required for 17-year-olds to join the Navy. The father said he would support his son's decision but there was sure to be resistance back home in South Buffalo.

Bauer's mother, Clara Bauer, personally knew the dangers of military service. Her brother, Henry, who had enlisted in the Army in 1936, was killed on a European battlefield during World War II.

“I told my father I was counting on him to convince mom,” Bauer said. “My mother was very smart and very stubborn, but somehow my father convinced her.”

When he arrived for duty on the USS Essex, a WWII era aircraft carrier, he and other newly assigned sailors were told to put aside any notions that naval service would be an extended sightseeing trip on Uncle Sam's dime.

“The first words from the flight deck’s chief petty officer were, ‘Remember, this is not a cruise ship. This is a warship and there is hard work involved.' ”

The Cold War was in full swing, and soon Bauer was in the thick of it.

In 1958, the Essex provided air support for a Marine invasion of Lebanon, where a civil war was heating up.

“We had around-the-clock flight operations and some of our planes came back with holes in them from small arms,” he said of the 21-day deployment which quashed rebels.

Essex’s crew members hoped to return to the United States, but an urgent order then directed the ship to the Pacific Ocean by way of the Suez Canal. The Essex was to provide support in a 1958 conflict known as the Taiwan Strait Crises. It involved a territorial dispute between the communist People's Republic of China and Taiwan.

“The mainland Chinese communists wanted to cross the strait and take over Taiwan and they were bombing a couple of islands in the strait that were controlled by Taiwan,” Bauer said.

Upon arrival, the Essex began flexing its air power.

"We had about 100 fighter jets and propeller bombers,” Bauer said. “We began flying them around the clock up and down the strait to intimidate the communists.”

The pressure of keeping up the show of force and limited opportunities for shut-eye, he said, turned the flight deck of the Essex into a dangerous work zone. Injuries, usually minor, were not uncommon.

But ironically it was in the peaceful waters off the coast of Florida that the Essex experienced its greatest tragedy during Bauer’s time aboard the vessel.

“A fighter jet came in and tipped its right wing and crashed into seven planes that were parked on the starboard side of the ship,” he said. “All the aviation fuel caught fire and everything started exploding.”

Bauer said he and four other flight deck hands were the first to grab a fire hose and rush over to the blaze. They spotted a gruesome sight. Four dead airmen.

“There was no way you could get at them. It was like a volcano. It was just brutal,” Bauer said. “Aviation fuel started running down on the starboard side, but they were able to close the hangar deck doors below. If the fire had gotten in there, there were more planes, aviation fuel, oil and some ammo. It could have sunk the ship. We switched from water to foam because the water was only making it worse. It took us eight hours to put the fire out and there must have been 50 or 60 of us working on it.”

Other airmen had been injured and in the coming days three of them died, Bauer said.

Though there was great sadness aboard the ship, the bravery exhibited by Bauer and the four other flight deck sailors who were the first to charge at the fire had not gone unnoticed. Each was awarded a commendation for Outstanding Performance of Duty.

When Bauer left the Navy in 1961, he said he was ready to begin civilian life. He married the former Dolores Wingeier in 1963 and this past May, they celebrated their 56th wedding anniversary.

After the military, Bauer worked as a traveling salesman. He sold steel to companies in a territory that stretched east to Syracuse and south Jamestown. Between work and raising two children with his wife, Bauer said he kept busy throughout the years.

His purpose in talking about his Navy experiences, he explained, was to let people know that even in times of supposed peace, the military often pays a price in guarding the nation’s freedom.

“This isn’t about me,” Bauer said. “It’s about honoring those seven men who died and all the others who have served on flight decks.”

Erie County executive: 'We are trying to avoid a shutdown'

Erie County officials said without further changes in behavior, the number of people hospitalized in Western New York for the virus could more than triple by late January.

U.S. Navy veteran Gary Bauer, who served on the USS Essex aircraft carrier during the Cold War era, at his home in Orchard Park on June 5, 2019. (Mark Mulville/Buffalo News)

A photo of the May 1959 fatal crash of a jet on the USS Essex aircraft carrier's flight deck, causing a fire. (Provided by Gary Bauer)