A Dunkirk-based nonprofit organization that specializes in providing services and affordable housing for those with mental illness, special needs and other disabilities is planning a housing project in the Fruit Belt.

That would bring 50 new apartments and homes to the low-income community east of the Buffalo Niagara Medical Campus and north of downtown.

The project would help counteract the gentrification trend in the neighborhood by keeping rents down for its new apartments. The nonprofit agency is partnering with the Fruit Belt Community Land Trust, which is the city's designated developer for vacant sites in the neighborhood.

"It seems like there’s a lot of great things going on there with the medical corridor, and we think this will be a great addition to the community," said STEL Executive Director Thomas Whitney.

First, plans by Rochester architectural firm SWBR call for a new 33-unit apartment building at the northeast corner of High and Peach streets, using eight city-owned parcels on High, Peach and Grape. The 42,000-square-foot building would be constructed on 0.74 acres of abandoned commercial and vacant residential properties.

The three-story building would include 21 one-bedroom and 12 two-bedroom units.

Fifteen units would be reserved for those with special needs, although Whitney said officials are still "working right now to figure out what populations we want to target." Rents for those units would be set at 30% of the area median income, while all the other units would be for 50% or 60% of the AMI.

The parcels include 326, 330, 332, 334 and 336 High, 179 Peach and 178 and 180 Grape, and are already zoned for neighborhood residential and mixed-use edge district. A single wooden-framed building on one of the properties would be demolished, but the other seven are vacant.

STEL also proposes to build five three-bedroom duplexes, one two-bedroom duplex and five single-family homes on 21 other properties, all zoned for neighborhood residential.

The apartment building would be handled by Buffalo Construction Consultants, while Rochester-based Atlas Construction would undertake the scattered-site work on the other properties.

Whitney said the nonprofits and architects are working on the final details and budget, but expect to apply for 9% low-income housing tax credits through New York State Homes and Community Renewal to fund the entire project.

He said he expects the state will announce a new round of funding in April or May, with applications due by June or July, and awards in the fall. If approved, the nonprofits would buy the properties from the city based on an independent appraisal, and construction could begin in spring 2022.

"It’s been a slow process trying to get the environmental numbers and different things," he said. "We haven’t gotten the final construction numbers yet."

In the meantime, the partners are preparing to seek site plan and other approvals from the city. For the apartment building, STEL is seeking four variances from the Zoning Board of Appeals on Feb. 17 for building coverage, a lot width of 138.24 feet – which exceeds the maximum of 120 feet – and for a smaller rear-yard setback than required.

That will "allow for the project to present the most economical and desirable building for the neighborhood while maximizing the number of residential units within the structure," the group said in its application, submitted by engineering firm Greenman-Pedersen.

"Despite the growth in the area, there is still a need for economical and fair housing for all parties," the agency said.

Whitney said the Fruit Belt nonprofit reached out to STEL after learning of its reputation. "We work well together," he said. "We both are mission-driven nonprofits, and we want to do something nice for the Fruit Belt community there."

In Buffalo, it previously completed projects with Transitional Services, Evergreen Health Services and DePaul Developmental Services, and has also worked in Ithaca and on Long Island. It's currently finishing a 49-unit affordable housing project in Dunkirk similar to the Fruit Belt proposal.

Eastman Machine Co. and Southern Tier Environments for Living are hoping to win approval for projects in downtown Buffalo and the Fruit Belt neighborhood.

The evangelical religious organization is planning an assortment of both exterior and interior improvements to its existing stone-and-frame building on Kensington Avenue.

Dunkirk-based Southern Tier Environments for Living and the Fruit Belt Community Land Trust want to construct a 33-unit apartment building at 326 High St., at the corner of Peach Street, along with five three-bedroom duplexes, one two-bedroom duplex and five single-family homes on scattered sites.

The deal, which was approved earlier this month by the city and its Olean Urban Renewal Agency, has been more than two years in the making.

Housing project Buffalo’s East Side to cater to LGBT homeless

A vacant building on Cherry Street will be redeveloped as a housing project over the next few years, following the sale of the property to Evergreen Health Services, a medical and social support group primarily catering to the lesbian, gay, bisexual and transgender community, as well as patients suffering from HIV or AIDS. Evergreen bought the five-story, 75,000-square-foot building,

Been there, done that with Olean building

City officials in Olean were hoping that Carl and William Paladino might be willing to repurchase the old Manufacturers Hanover Bank Building in the heart of the downtown, but for the developers, it’s “been there, done that.” The owners

Lawsuit against Symphony Management's Lawrence project to proceed to court

Located at 983 Michigan, the Lawrence project calls for a mix of one- and two-bedroom apartments in a pair of long buildings along Michigan Avenue and Maple Street.

Dr. Greg Daniel's Kanaka Partners has been named the designated developer of one of the oldest structures in the Fruit Belt neighborhood.

The lawsuit argues that the Buffalo Planning Board and the Zoning Board of Appeals disregarded the city's Green Code.

A rendering of the proposed new apartment building in the Fruit Belt by Southern Tier Environments for Living and the Fruit Belt Community Land Trust. 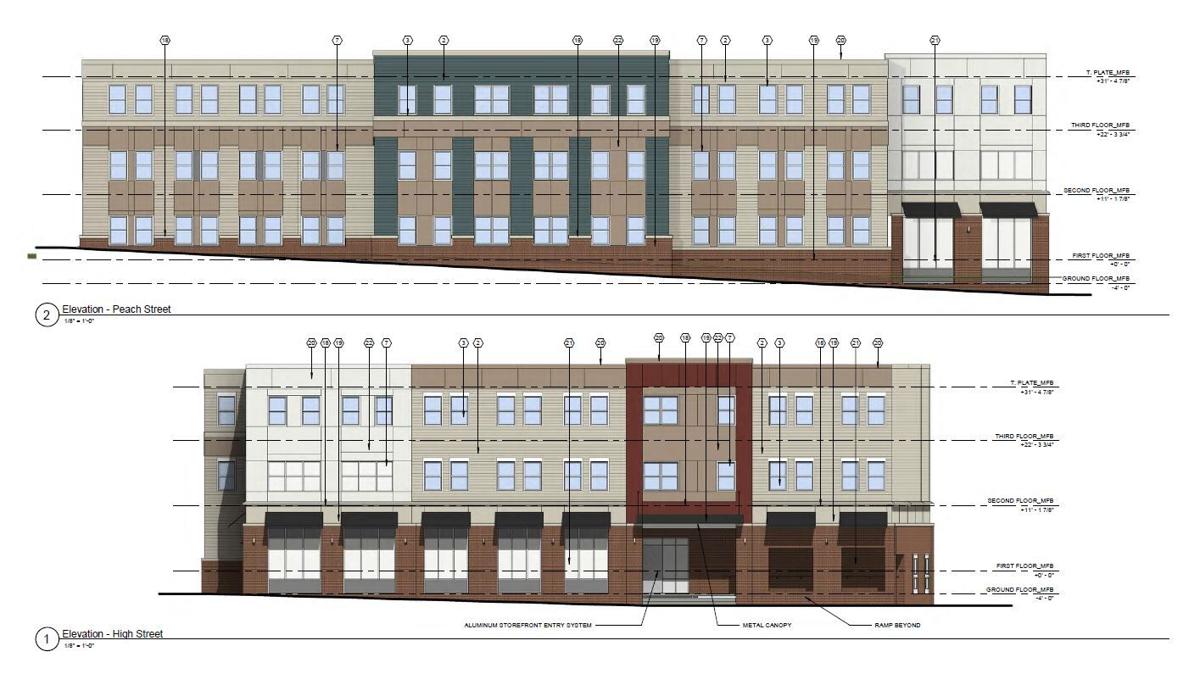 Schematic elevations of the proposed new apartment complex in the Fruit Belt neighborhood, by Southern Tier Environments for Living and the Fruit Belt Community Land Trust.