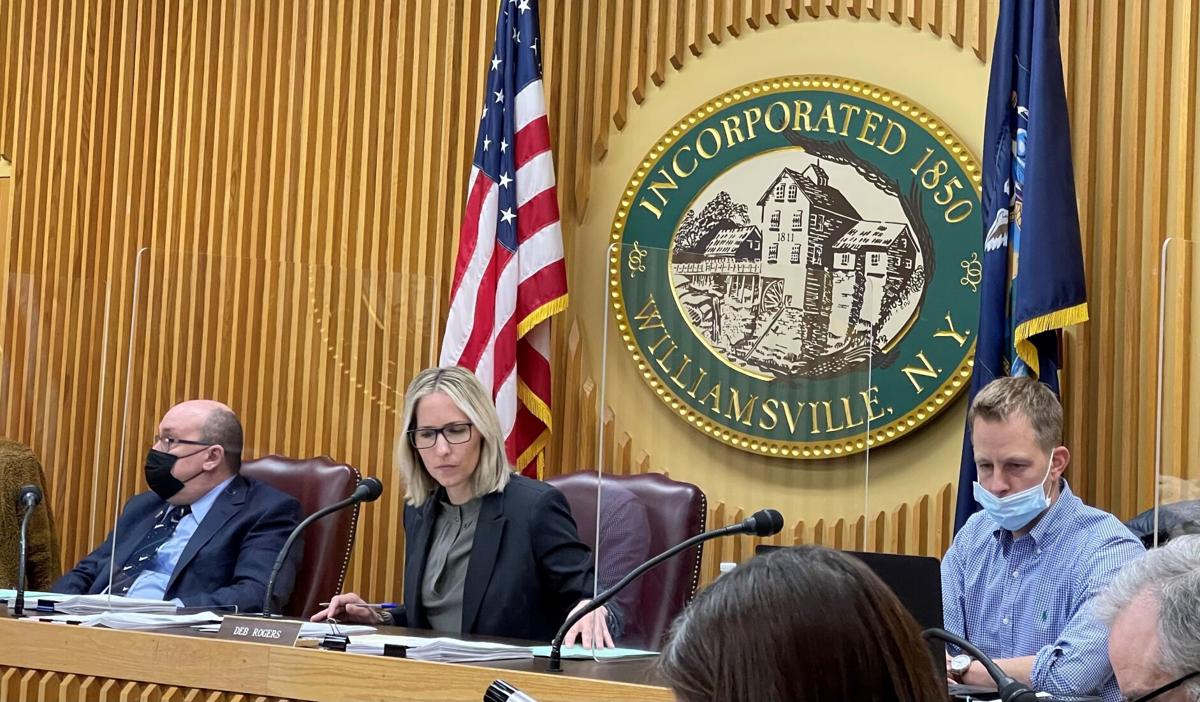 Williamsville Mayor Deb Rogers, who is without a face mask, at the work session preceding the Jan. 10, 2022, Village Board meeting. Deputy Mayor Dave Sherman sits to the left and new Trustee Matt Carson is on the right. 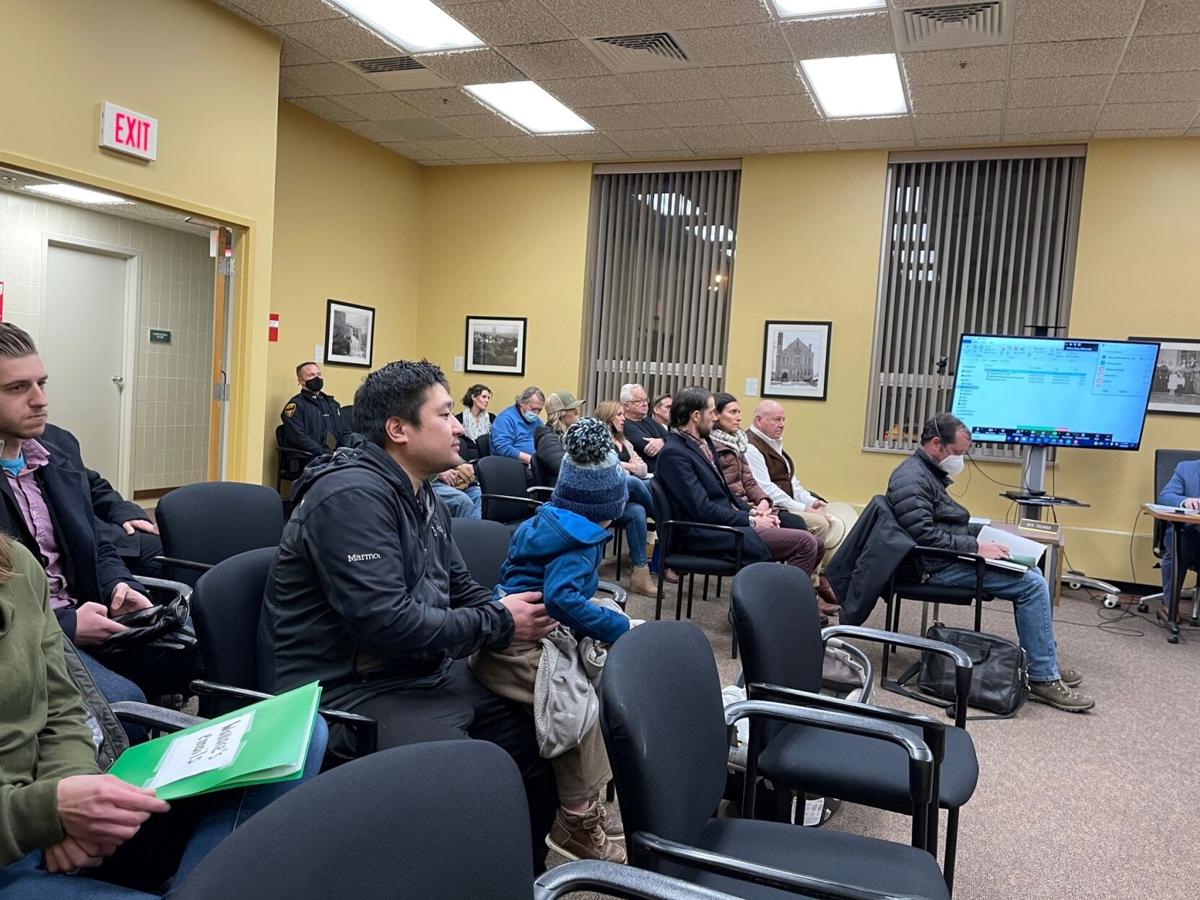 Some of the audience at the Jan. 10 Williamsville Village Board meeting. The majority of meeting attendees were unmasked. 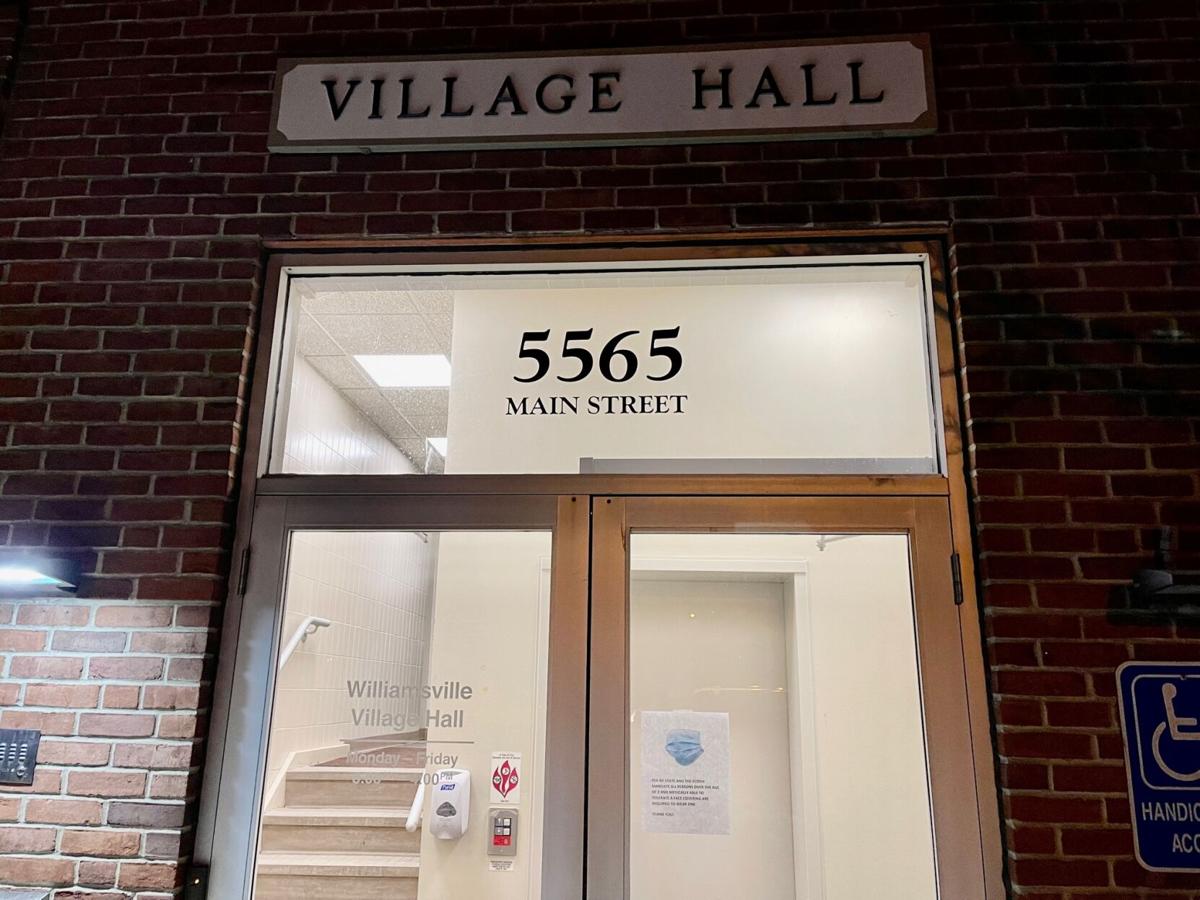 The back entrance to Williamsville Village Hall, 5565 Main St., prior to the Jan. 10, 2022, Village Board meeting. Note the sign on the door on the right notifying the public that masks are required within the building.

The debate over facts and freedom and rights and restrictions that has roiled the nation since the start of the Covid-19 pandemic has come to a one-square-mile village where complaining about traffic and parking used to rate as the biggest issue: Williamsville.

Residents from the village of 5,300 and neighboring communities engaged in an at-times testy debate Monday night over whether to accept, or defy, the state mask mandate.

Dozens of people, the vast majority unmasked, filled the auditorium at Village Hall to criticize Covid-19 health measures as infringing on their rights. They threw their support to Mayor Deborah Rogers, an outspoken opponent of such public health regulations, and made it clear they feared the effects of mask and vaccine mandates more than the effects of the virus.

But those who spoke over a videoconference connection advocated for the mask mandate as a crucial initiative to limit the spread of Covid-19 and decried any attempt, even symbolic, to weaken the rule.

"This village government is off the rails," Randall Klaiman said online. His wife, Shira Gabriel Klaiman, who called Rogers' campaign "embarrassing," said she had collected 200 signatures on an online petition defending the mask mandate.

It was a reflection of the rancor over Covid-19 and public health measures such as mask mandates that has spilled out at municipal and school board meetings across the country and, now, in Buffalo Niagara.

Matthew Etu said he is resigning effective immediately because of a “toxic and destructive” environment created by Williamsville Mayor Deborah Rogers.

The meeting was the first since a village trustee resigned earlier this month over the issue.

Rogers was the only one of five members who did not wear a face mask at the Village Board table, where plastic dividers sat between each member.

In the audience, as of the 7:30 p.m. start of the Village Board meeting, nearly 30 people were in attendance and fewer than 10 wore masks. No one enforced the state mask requirement for the meeting, a rule outlined on a sign at the entrance to Village Hall.

"I want more people to support our Constitution," said Amy Leach, a Clarence resident who has rallied against mask and vaccine mandates.

One audience member, in fact, handed Village Board members pocket copies of the Constitution, arguing mandates violate the Fourth Amendment, though courts generally have upheld mask and vaccine mandates.

Another, Dennis Hoban, came in a white cowboy hat to make clear he thought he and other mandate critics were the good guys, not the villains, in this story.

"I think the board is headed in the right direction," he said.

More than 40 people joined the meeting online, a total the village's community relations director said he's never seen for a Village Board meeting.

"We feel safer because of the mandates that are in effect," Jessica Poulin said online.

Another resident, Melissa Jorgenson, said she fears an anti-mandate resolution considered by the Village Board “will embolden the minority" to defy the rules.

"I will be reluctantly forced to take my business outside the village," she said, rather than enter businesses where masks aren't worn.

After the public comment period, the Village Board narrowly approved by a 3-2 vote the resolution that criticized Covid-19 mandates. 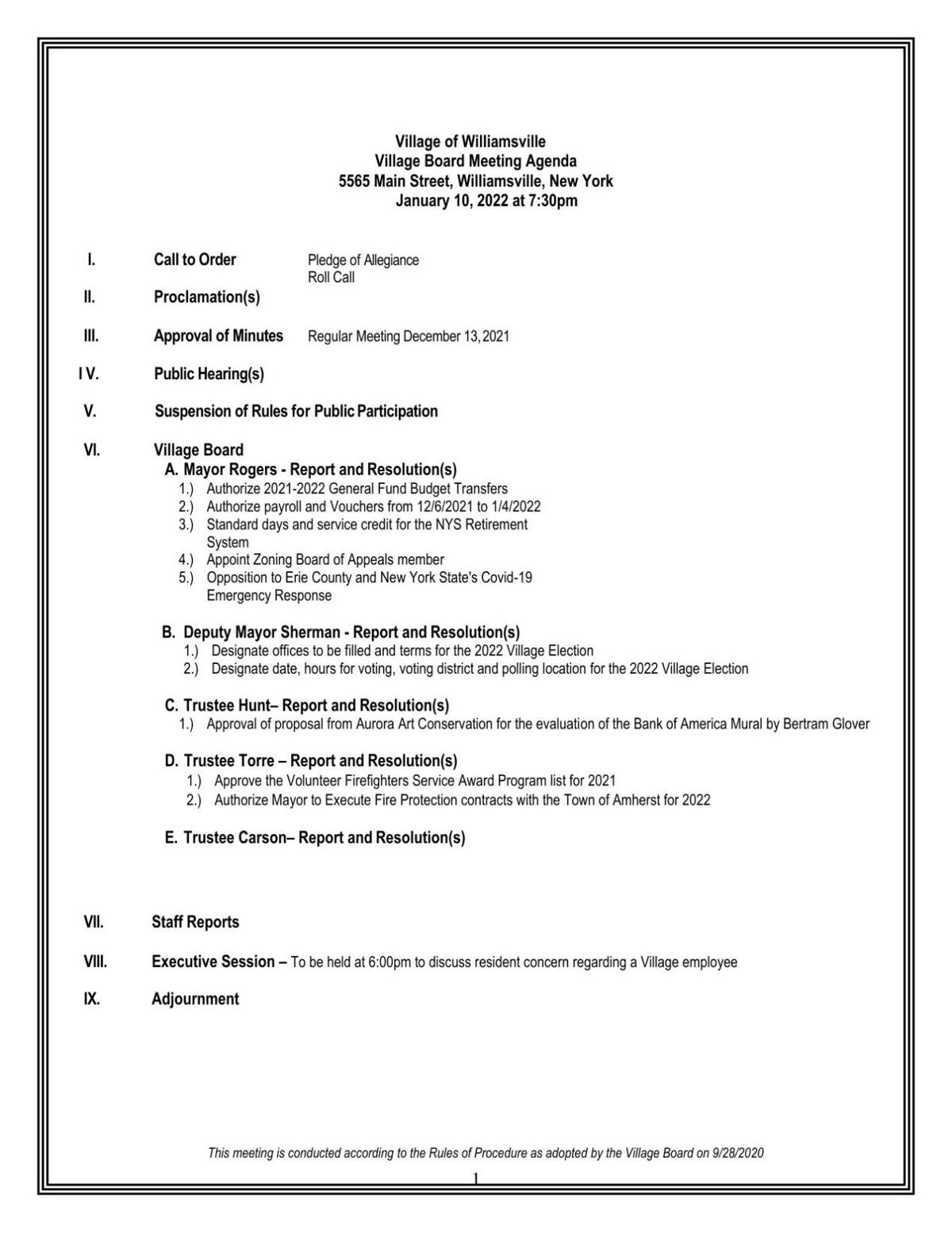 The resolution argues against any Covid-19 vaccine or mask mandates, asks Erie County and state health department employees not to enter the village to enforce any such mandates and urges passage of state legislation that would require counties get approval from municipalities of any states of emergency directly affecting those communities.

"We should not second guess those authorities with our own personal opinions," Trustee Eileen Torre said, referring to doctors and scientists trying to steer the state through a pandemic that has killed about 60,000 New Yorkers. She voted no.

But Rogers argued the village has an obligation to make its position known.

"I'm not doing it to be divisive," Rogers said before her vote. "I'm doing it to stand up for freedoms and rights."

Numerous town and village officials –  primarily but not always Republicans – have taken a stand in recent months against the mask mandate in public spaces imposed first by Erie County Executive Mark Poloncarz and later, on a statewide basis, by Gov. Kathy Hochul.

Western New York counties use education, rather than fines to enforce mask rules

There is little appetite in Western New York for governments to enforce the state mask mandate, or to penalize businesses that violate the regulation, especially outside Erie County.

The supervisors of Marilla and West Seneca, for example, came out in opposition to the mask mandate as an infringement on the public's rights, while the supervisors of Amherst and the Town of Tonawanda late last year urged residents to adhere to the rule as a needed public health measure.

The Grand Island Town Board was split, with board members approving a resolution in early December that asked Erie County Health Department employees to avoid coming onto the island to enforce any Covid-19 mandates. Two days later, Supervisor John Whitney, who missed the board vote, issued a statement directing town employees to enforce the mask rule and urging town businesses and residents to do the same.

Monday's meeting in Williamsville came one month after a more-contentious Village Board meeting. During the acrimonious Dec. 13 forum, a large group of residents opposing mask and vaccine mandates directed their ire at several board members for more than two hours.

A majority of the board voted Dec. 13 to oppose a future vaccine mandate in Erie County, as included in a potential second phase of Covid-19 regulations.

Matt Carson will take the place of former Trustee Matthew Etu, who resigned in a letter to village officials criticizing Mayor Deb Rogers for an anti-mask agenda.

In the wake of that meeting, Matthew Etu earlier this month resigned as village trustee and deputy mayor. He sent a blistering letter to Williamsville officials decrying Rogers' anti-mask campaign and the "toxic and destructive" environment she created.

Rogers defended her right to speak out against the mask mandate and other Covid-19 policies she opposes and said she has not, as Etu insisted, neglected her mayoral duties in the process.

Carson and Sherman, who was appointed to the board last year, must run in the June 21 village election for the final year remaining on their respective terms.

Also Monday, Williamsville returned to offering the option of attending Village Board meetings in person or watching online, at least for the foreseeable future.

The donation was made recently to Delaware Council Member Joel Feroleto's office.

New York State is past the worst of the Omicron surge, with overall cases down to about 49,000 from a peak of 90,000, the governor said.

The Williamsville Village Board on Thursday voted 3-2 to hire attorney Todd Aldinger to fight a $300 fine issued by the Erie County Department of Health.

The board voted 3-2, with Trustees Eileen Torre and Christine L. Hunt and Deputy Mayor David F. Sherman giving approval to the resolution to pay the fine. Mayor Deb Rogers was joined by newly-appointed Trustee Matt Carson in voting no.

Williamsville Mayor Deb Rogers, who is without a face mask, at the work session preceding the Jan. 10, 2022, Village Board meeting. Deputy Mayor Dave Sherman sits to the left and new Trustee Matt Carson is on the right.

Some of the audience at the Jan. 10 Williamsville Village Board meeting. The majority of meeting attendees were unmasked.

The back entrance to Williamsville Village Hall, 5565 Main St., prior to the Jan. 10, 2022, Village Board meeting. Note the sign on the door on the right notifying the public that masks are required within the building.