The latest version of the Lawrence design, along Maple Street. (Image courtesy of Symphony Property Management) 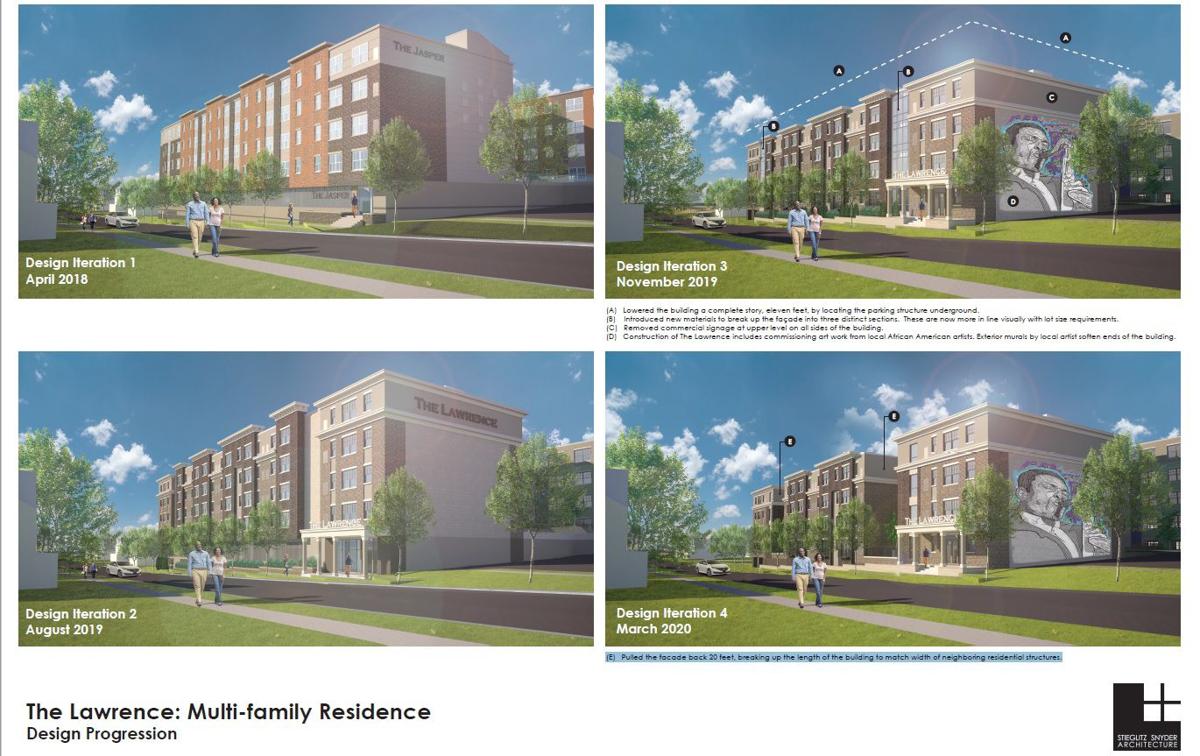 The design of the The Lawrence has changed over the past year. (Courtesy of Symphony Property Management)

The developer proposing to construct a large apartment building on the edge of the Fruit Belt neighborhood is making yet another adjustment to the design – the third major change in a year – to appease area residents who objected to the size and scale of the project.

Symphony Property Management, owned and led by Timothy Leboeuf, has unveiled a new version of its plans for the Lawrence on Michigan Avenue, pulling back the front facade on Maple Street 20 feet in two places in response to community feedback.

That's intended to break up the length of the building into three "distinct sections" to make it less imposing and try to match the width of neighboring residential houses, officials said in a statement. That also brings it "more in line with the spirit" of the Green Code's neighborhood zoning on the street, the developer said.

"We are making this change as we feel it addresses a major concern of the community and the city regarding our design, the massing on Maple," Leboeuf said.

The change removed eight units from the Maple facade, so that only 23 units now front on that street. But the developer is adding to the Michigan side, which gains a fifth floor and 12 more units, for a new total of 133 apartments – up from 129.

Leboeuf said that "helps offset the lost rentable square footage on Maple" and "creates a gradual reduction from the Medical Campus to the residential neighborhood east of Maple."

Other elements of the project are unchanged, including the developer's community outreach and investments.

But it's not clear if that will be enough to satisfy neighbors and community advocates, who have criticized the project as too big and inconsistent with the historic area of older homes located next to the Buffalo Niagara Medical Campus. Opponents say the project still needs too many variances from the Green Code – particularly for its four-story height on Maple – and would likely leave out the neighborhood's minority residents who couldn't afford to live there.

The project is still pending before the city's Planning Board and Zoning Board of Appeals, where Symphony has now filed its updated plans. Leboeuf said he intends to present to the ZBA on March 18, followed by the Planning Board on March 23, seeking approval from both.

"We've now made significant concessions on height, parking, massing and aesthetics based on community and board member input," he said.

The project had originally been estimated at $25 million, but Leboeuf said that's now "a moving target, given the amount of changes we've implemented and the impact on construction costs."

"It is not an insignificant number, for sure, but we are more than happy to make these changes to seek final approval," he added.

Plans for the controversial project at 983 Michigan – which features three connected structures that also front on Maple Street – call for a mix of studio, one-bedroom and two-bedroom market-rate apartments. It would include 78 underground parking spaces, plus 50 additional spaces that would be secured from owners of nearby lots.

The original proposal called for a five-story building throughout, but opposition over the size, design and perceived lack of affordability sent Symphony back to the drawing board. The developer came back with a new version that pushed the parking underground while introducing new Juliet balconies, doors, glass and other features to the facade to break up the appearance. The revision lowered the height by one floor and also pushed the building further back from the street, creating a buffer and enabling more landscaping.

But even with the 11-foot reduction in height to 44 feet, the building is still four feet higher than permitted by the Green Code, and also too long. That's what the newest changes are designed to partially address, although the project will still require a variance, at least for height.

Lawsuit against Symphony Management's Lawrence project to proceed to court

Located at 983 Michigan, the Lawrence project calls for a mix of one- and two-bedroom apartments in a pair of long buildings along Michigan Avenue and Maple Street.

The latest version of the Lawrence design, along Maple Street. (Image courtesy of Symphony Property Management)

The design of the The Lawrence has changed over the past year. (Courtesy of Symphony Property Management)