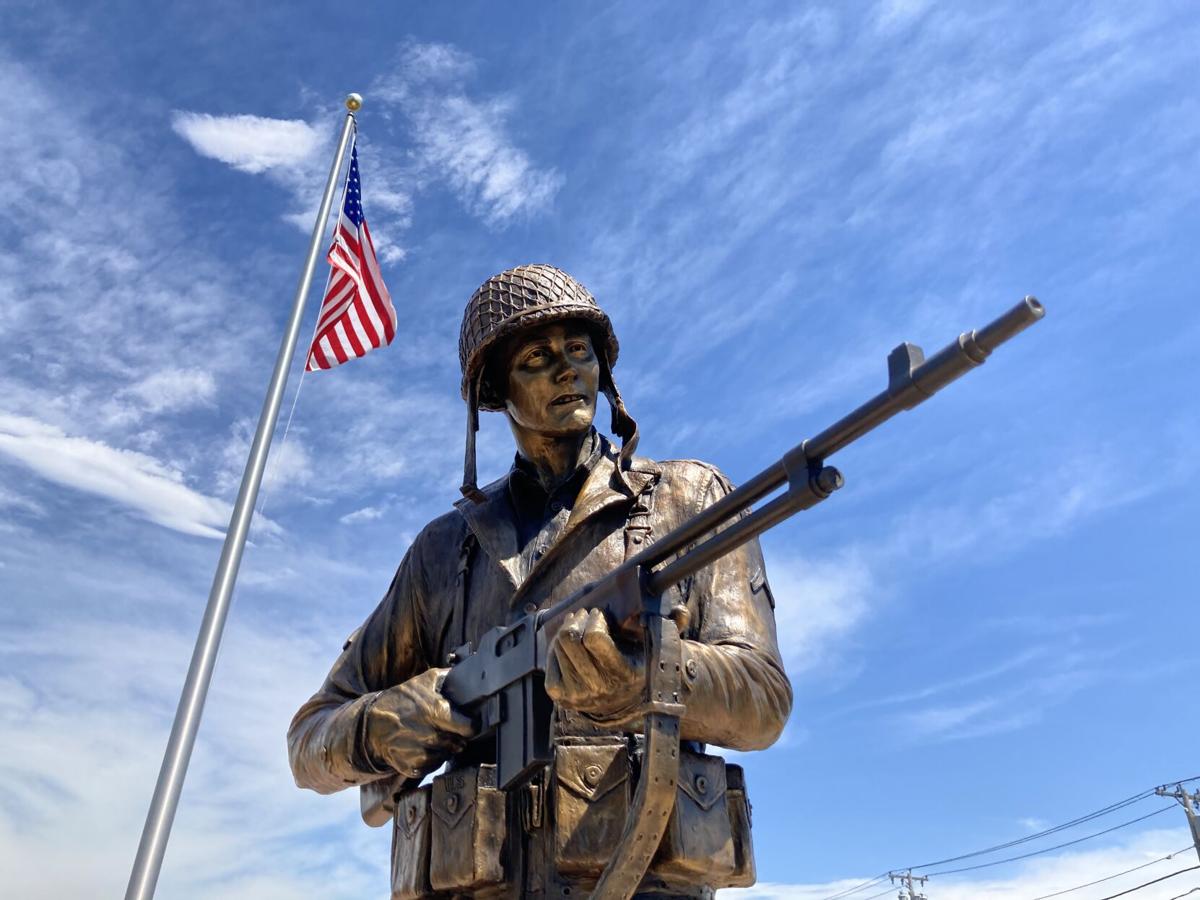 A statue of Charles DeGlopper was unveiled on Grand Island. 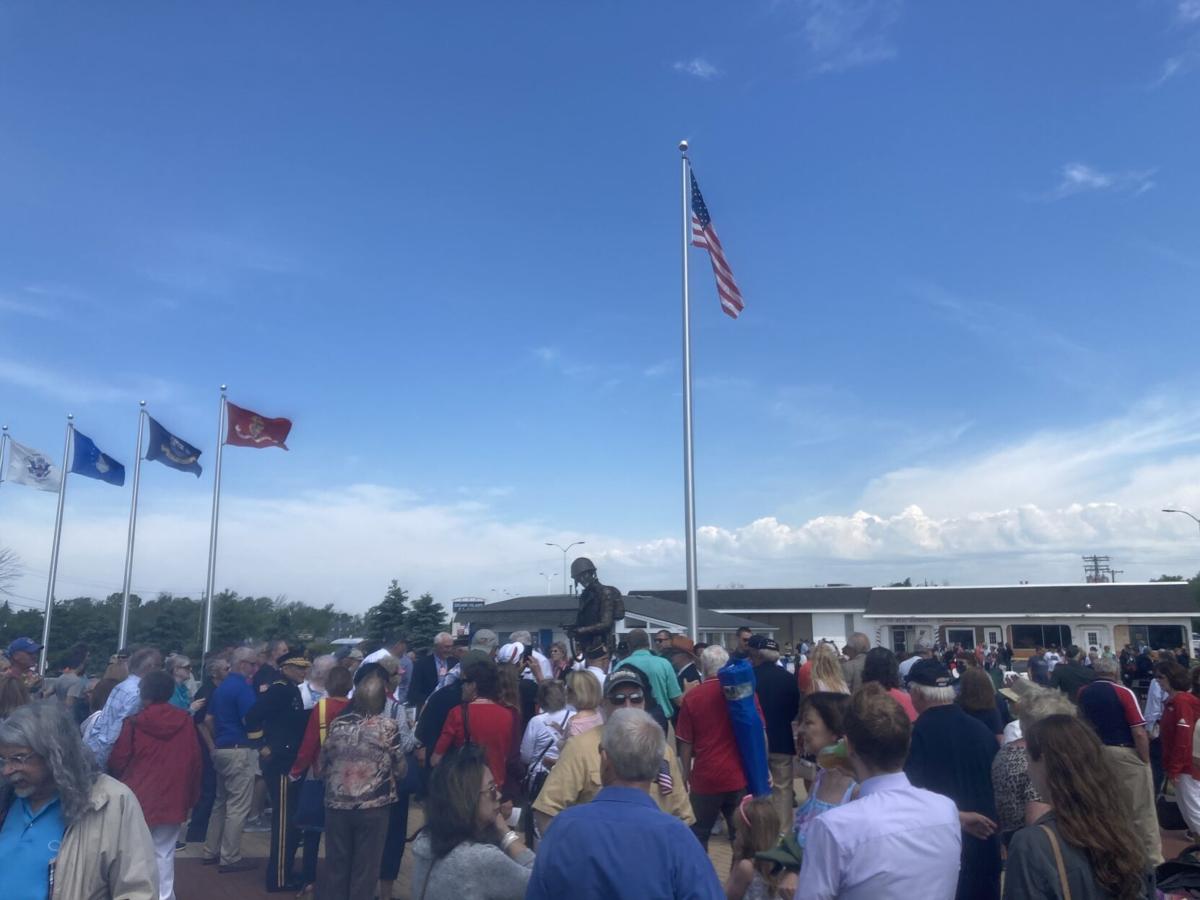 Hundreds were on hand for a ceremony unveiling a statue of World War II hero Charles DeGlopper. 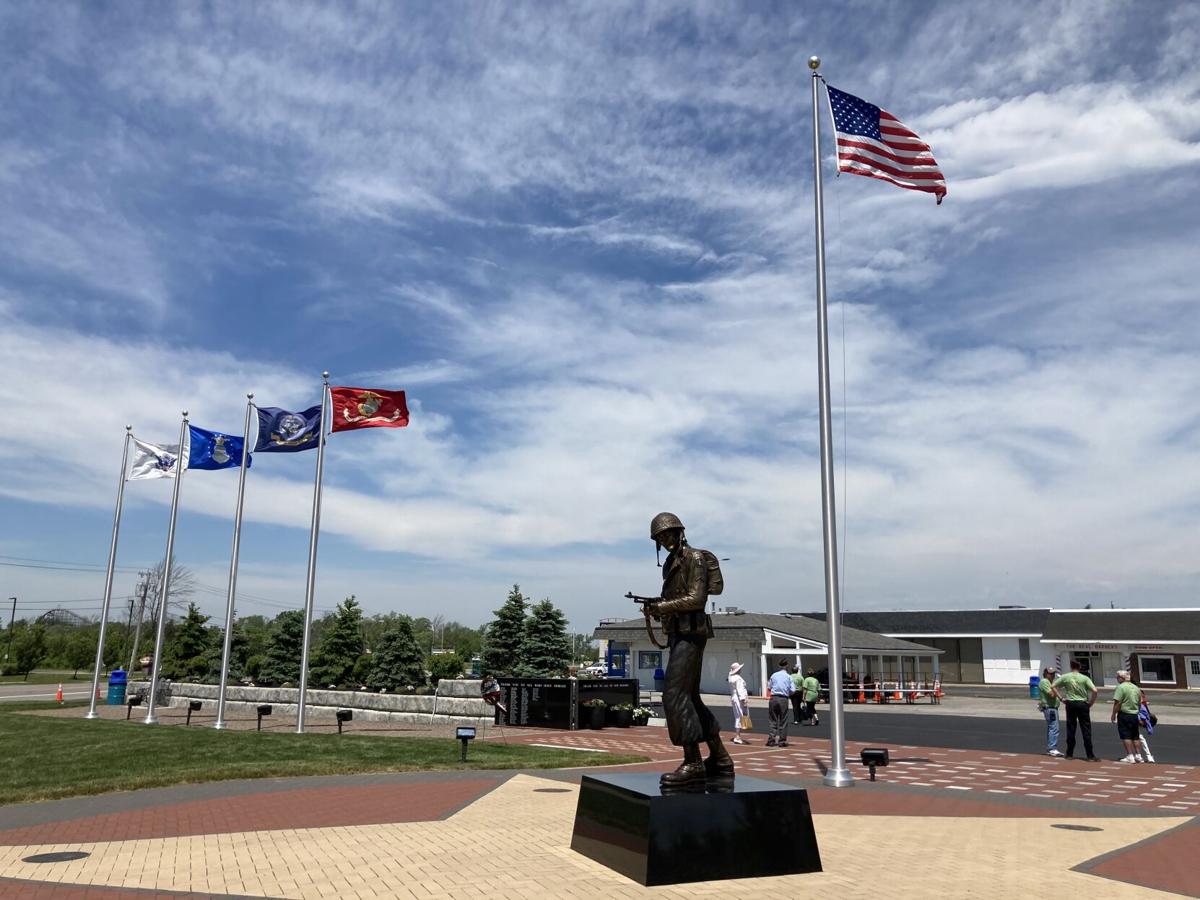 A new Charles DeGlopper statue is the centerpiece of an expanded park that pays tribute to many service members from Grand Island.

The ceremony to unveil a statue of Grand Island favorite son Charles DeGlopper may have been delayed a year, but as several hundred gathered under glorious skies and a breeze whipped the American and military flags at a fully expanded and completed DeGlopper Memorial Park, many said the wait was worth it.

"It looks a little nicer this year than it would have last year," said Ray DeGlopper, nephew of Charles, a World War II hero who is the island's only recipient of the Medal of Honor. "Everything worked out. I feel that heaven is looking down on us."

A five-year project transformed the memorial park at the intersection of Grand Island Boulevard and Baseline Road from a single plaque on a small triangular patch of land to more than double its original size, with several walkways and memorials for other service members from the suburb.

"It kind of worked out better because everything is now complete," said Susan Geissler, sculptor of the DeGlopper statue. "The whole memorial park is gorgeous, it's beautiful."

The centerpiece of the expanded park is the life-size bronze statue of Charles DeGlopper, who is depicted standing and holding a Browning Automatic Rifle, as he did as a 22-year-old on June 9, 1944, when he was killed in action during the Battle of Normandy.

The story of Army hero Charles N. DeGlopper reads like a Hollywood script: A small town boy joins the Army in World War II and gives his life to save his platoon, stepping out into the open to fight the Germans alone and stopping them from taking control of a strategic bridge in the Normandy campaign. But on June

A member of the 82nd Airborne Division's 325th Glider Regiment, DeGlopper was posthumously awarded the Medal of Honor, the highest award in the U.S. military, for his heroics during an attack by his C Company 1st Battalion on the La Fiere Bridge on the Merderet River.

"Outflanked by superior forces, DeGlopper volunteered to support his comrades by firing from his automatic rifle while they attempted to withdraw through a hedgerow," states his Medal of Honor citation. "He walked from the ditch into the full view of the Germans and sprayed hostile assault fire. He was wounded, but he continued to fire. Kneeling in the roadway he fired burst upon burst until he was killed outright. He was successful in drawing the enemy actions away from his fellow soldiers who were able to move to a more advantageous position."

Onlookers Saturday commented on the details of the statue, details that Geissler painstakingly worked on with the DeGlopper family.

"All I cared about was that the family loved it," said Geissler, of Youngstown. "They were very helpful in guiding me with details that I needed. ... It's very humbling. I'm extremely honored. This is very special, just because of who and what he is."

Ray DeGlopper, who housed the statue in his Fix Road garage through the year-long delay, was one of several volunteers who rotated on guard duty at the park in the days before the sculpture was unveiled.

"Wednesday night, I was sitting here in my pickup truck, and when you look at the whole park, it just looks impressive, just awesome," he said.

Dan Drexelius, the DeGlopper Memorial Expansion Committee's project manager, lauded the community effort behind the park. Drexelius, owner of Grand Island's Double D Construction, said when a sign went up inviting people to a "sod party" to help lay sod for the park, 300 residents showed up in the snow and rain to do so.

"It was phenomenal," Drexelius said. "What's amazing to me is that it's a community-wide effort. When it's something good, the community comes together. People just dive in from all angles, and that's what happened here."

A statue of Charles DeGlopper was unveiled on Grand Island.

Hundreds were on hand for a ceremony unveiling a statue of World War II hero Charles DeGlopper.

A new Charles DeGlopper statue is the centerpiece of an expanded park that pays tribute to many service members from Grand Island.