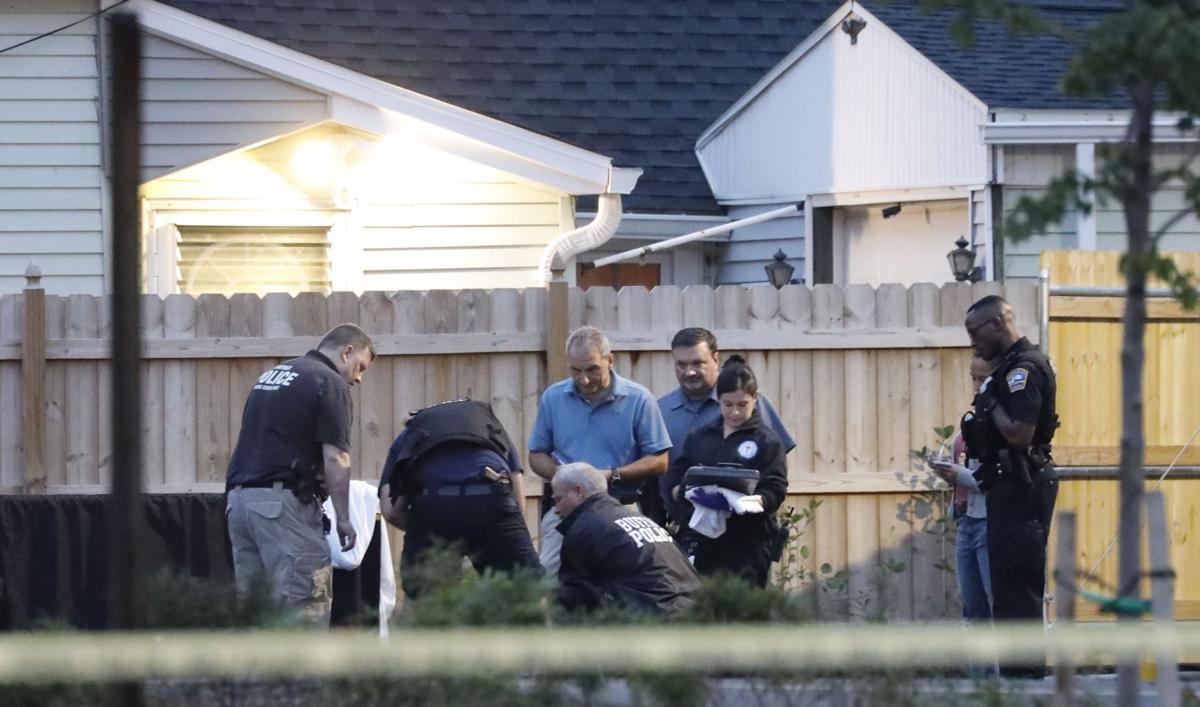 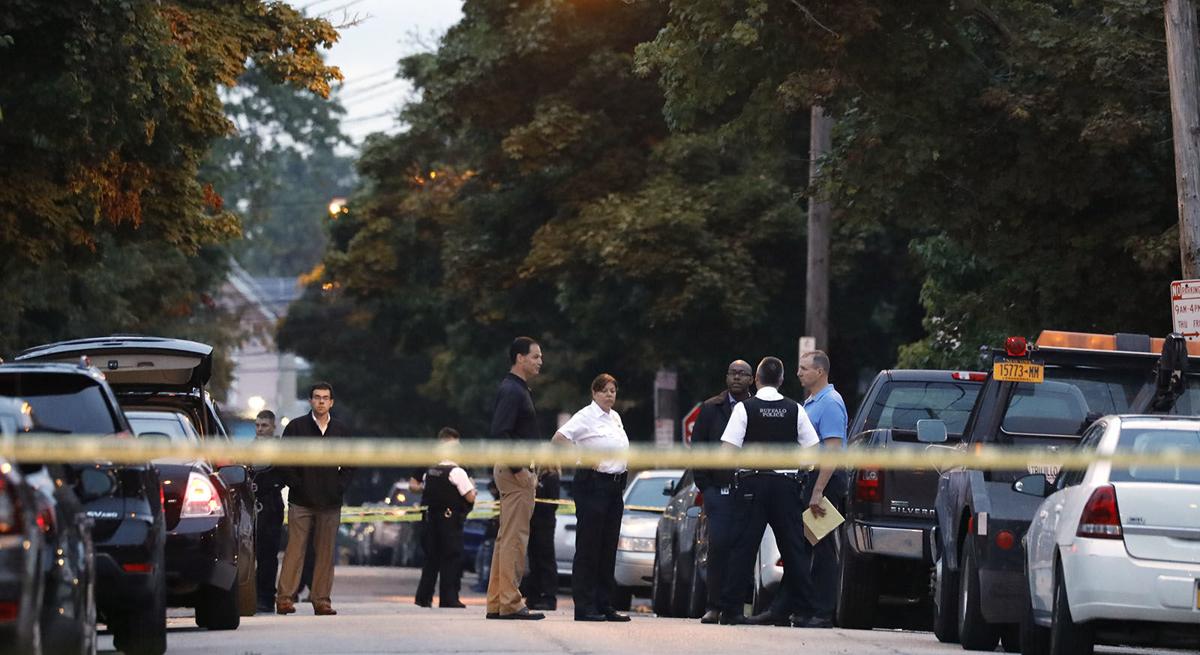 A Buffalo officer shot and killed a suspect while responding to a gun call early Sept. 12. (Derek Gee/Buffalo News) 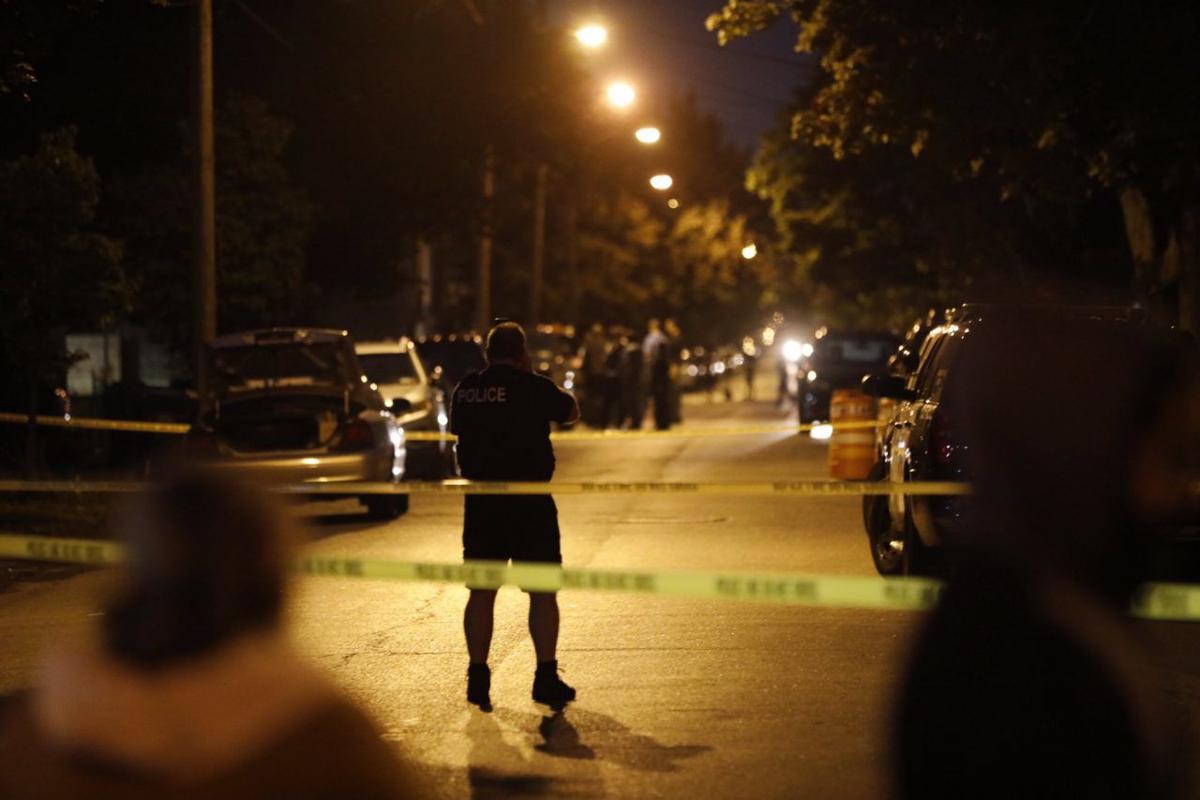 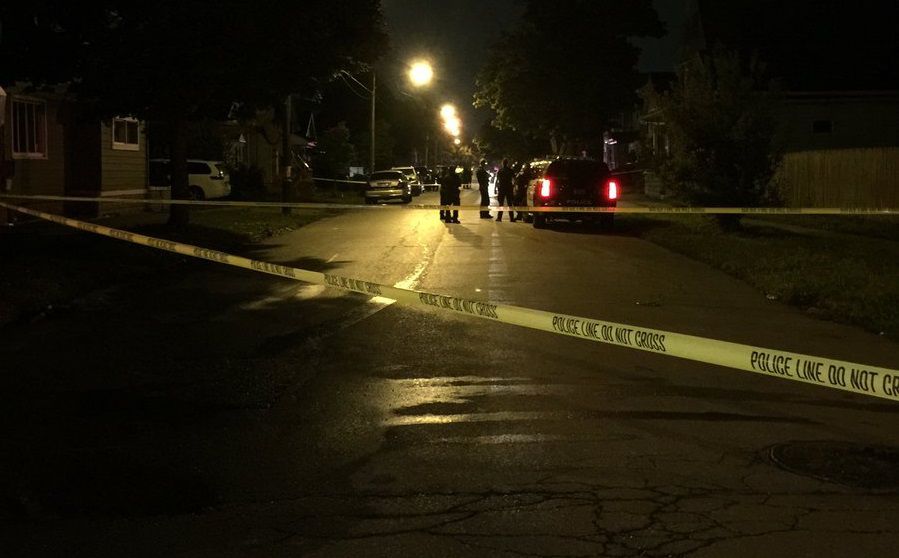 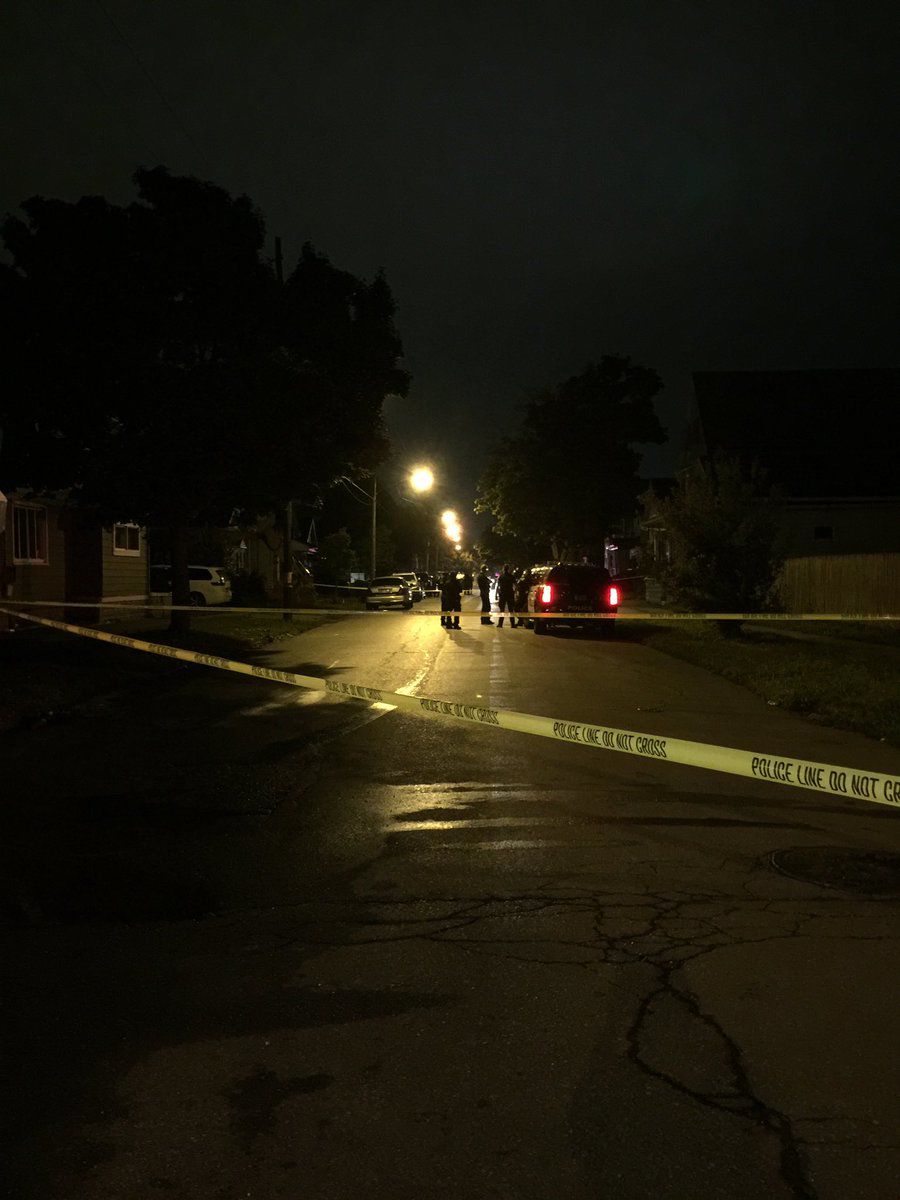 Buffalo Police Department officials believe an officer had no choice early Wednesday but to shoot a man carrying a gun and refusing commands to drop the weapon.

"It got to a point where the officer had to stop the immediate threat and had to discharge his own weapon," Deputy Buffalo Police Commissioner Joseph A. Gramaglia said.

The Buffalo man was killed in the officer-involved shooting on the 400 block of Plymouth Avenue near Massachusetts Avenue on the West Side.

A spokesman for the Buffalo Police Department late Wednesday identified the man as 32-year-old Rafael Rivera.

The groups Just Resisting and Black Love Resists in the Rust held a vigil Wednesday afternoon near the scene of the shooting. They said Rivera's family wants the officers involved in the shooting fired. The group has questioned the use of force by police officers in previous incidents.

About 50 people gathered at about 6 p.m. Wednesday in and around the School 77 parking lot for a vigil in Rivera's memory.

They included his mother and aunt, who friends of the family said were not yet ready to speak publicly about their loss. Other relatives and friends sat in chairs or stood in front of a house next to the school, which a friend of the family identified as the home of Rivera's aunt. Silver-colored Mylar balloons that spelled out "R.I.P. Pito" floated above the fence line along the west side of the house.

Brenda Miller-Herndon, an organizer with PUSH Buffalo, said she had known Rivera since he was 10 years old. Miller-Herndon described him as "like a son to me," and said he had, at least once, taken refuge at her residence for a couple of weeks.

She said Rivera was the oldest of 15 children and a father of two children.

"So what I can pretty much say is he was a loving father. I can't say anything bad about him, but I know he was petrified of the cops. I know that he wasn't a violent person, because he was being actually bullied, and my sons actually went out there and beat up the guy that was bullying him," Miller-Herndon said.

Emotions were raw among some attending the vigil, which featured over a dozen lighted prayer candles outlined by a few empty liquor bottles as an homage.

Some attending the vigil carried handwritten placards that read: "This is our neighborhood. Our power will not be squashed," and "Hold police accountable." Others shouted epithets in connection to police.

"This is enough, but it's not enough. We need these same people that's out here lighting candles to let our elected officials know the systemic problem that's going on on the West Side," Miller-Herndon said.

"There's going to be another one if we do not do something now. We need to stand for something. This is our community," she said.

Shaketa Redden of Just Resisting and VOICE Buffalo said she did not know the victim in Wednesday's fatal shooting, but all that she knew about him was positive.

"He sounds like someone who deserves to be humanized, who's a person who deserves respect and doesn't deserve to be murdered, and his body laying in a parking lot for four hours," Redden said.

"I don't know that it necessarily matters what happened," Redden said, in regard to what may have led to the shooting. "What I do know is that someone is dead and is not able to see his family again. To me, it's not warranted. Someone who left their home at certain time should be able to return to it."

Police and fire department radio transmissions from early Wednesday captured what sounded like an officer saying, "Stop or I'm going to shoot you!" and then sounds of gunfire.

"The AG only has jurisdiction in law enforcement shootings if the individual was unarmed," Flynn said. "Therefore, we are now investigating the matter."

Officers responded at about 3:05 a.m. Wednesday to a call of a man with a gun in the vicinity of Plymouth and Massachusetts avenues, Gramaglia said at a news conference.

An officer arriving at the scene encountered a man with a gun. The officer engaged in a foot pursuit that covered about a half a block and ended in a parking lot in the 400 block of Plymouth, Gramaglia said.

The man had the gun in his hand when police encountered him, Gramaglia said.

"The suspect refused multiple requests by the officer to put the gun down," he said. "At that time, the officer discharged his service weapon to stop the immediate threat the suspect posed."

Police are reviewing video of the incident, but the deputy commissioner would not identify the source of the video. The department's body-worn camera pilot project has ended, so none of the officers involved had a body camera.

Radio transmissions indicated Buffalo firefighters were dispatched to the scene about two minutes after the shooting. About eight minutes later, firefighters at the scene radioed to dispatchers: "Apparent DOA."

Listen to the dramatic audio of police-involved shooting in Buffalo

A release from Black Love Resists in the Rust/Just Resisting said "footage shows officers shooting Pito in the back multiple times. His body was then left to bleed out on the ground, handcuffed, for more than three hours."

The officer who fired the shot is a two-year veteran of the department. The officer was placed on administrative leave.

Gramaglia was asked whether the man was still running when the officer fired.

"We're still looking at the video. We're reviewing that. Yes, the suspect was continuing his forward motion," he said.

When asked if the man was moving forward toward the officer, Gramaglia declined to provide any further details.

Police would not say how many shots were fired or where the man was struck. Police called for first aid but the man died at the scene.

From what investigators have determined so far, it does not appear the 32-year-old man discharged his weapon, Gramaglia said.

Police said they have recovered a gun at the shooting scene, which is on the grounds of the former School 77, which PUSH Buffalo turned into its new offices for itself and other community organizations, as well as affordable housing.

PUSH Buffalo, in a written statement Wednesday afternoon, said the shooting has directly impacted several members of the community who either work for or serve the organization, Peace of the City or Ujima Co. in some capacity.

"As a social justice organization with deep roots in the West Side community, we believe this kind of police violence is wholly unwarranted and in this instance has resulted in a loss of life that will have incalculable consequences for families, neighbors, community members and relations with local law enforcement," PUSH Buffalo said.

The organization said it demands accountability from the police.

"Police are trained one way and then when incidents like this occur they demonstrate an ability to act in other ways with little to no respect for people in our communities," PUSH Buffalo board member Annie Morivivi said in a written statement. "The victim was my cousin. He was family. He was like a son to me."

Plymouth Avenue was closed to traffic between Massachusetts and Rhode Island Street.

There remained a police presence in the West Side neighborhood, where neighbors started to come outside at about 6 a.m. One neighbor said he heard three gunshots. Another said he saw a police car, thought nothing of it, then suddenly many patrol cars arrived.

Police were searching the area with flashlights shortly before dawn.

Police officers at the scene of a police involved shooting that left a suspect dead. Plymouth is shut down between Rhode Island and Massachusetts. Police using flashlights are looking around at the scene. pic.twitter.com/re1XUeQTeZ

The most recent officer-involved shooting in Buffalo happened July 20 during a standoff outside a South Buffalo home. Jeremiah D. Smith, 35, was shot by an officer after police said he didn't respond to requests from police to drop his 12-gauge shotgun. Smith was charged with menacing a police officer, reckless endangerment and criminal contempt.

The most recent fatal shooting involving a Buffalo police officer happened on May 7, 2017, in Black Rock. Jose Hernandez-Rossy, 26, was killed following a traffic stop in which police officers said they thought Hernandez-Rossy had a gun. One of the officers believed he had been shot in the ear and Hernandez-Rossy was shot while running away, the state Attorney General's Office concluded. There was no gun residue inside the vehicle and no gun was ever recovered. The two officers did not face any criminal charges following an investigation by the AG's Office.

A Buffalo officer shot and killed a suspect while responding to a gun call early Sept. 12. (Derek Gee/Buffalo News)