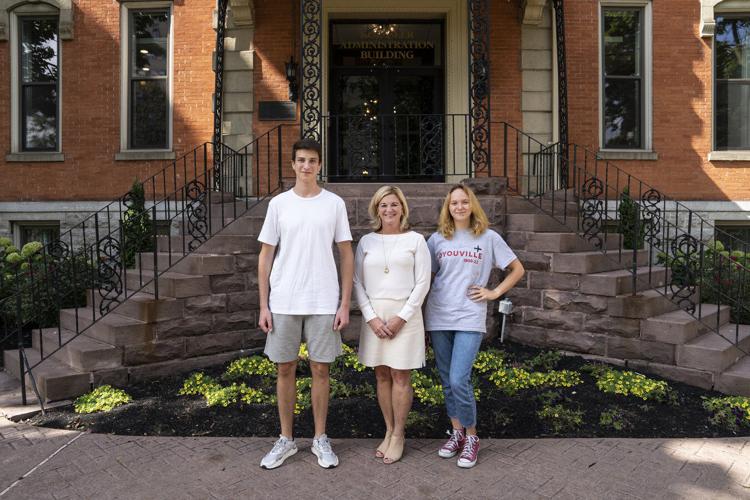 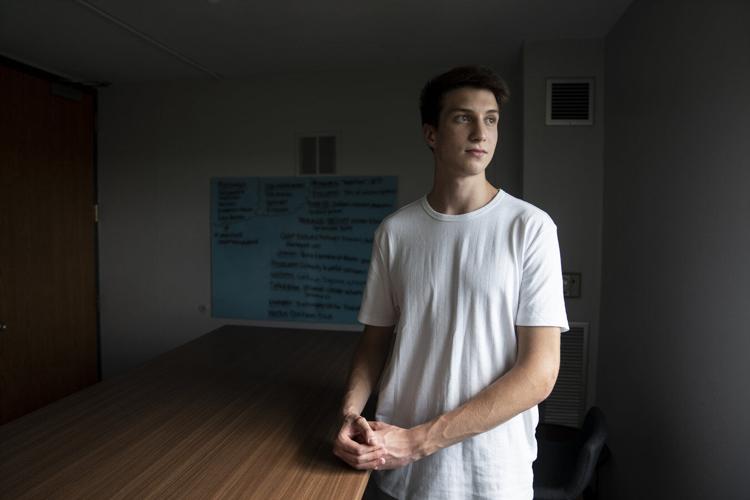 Yaroslav Malynych, 17, stands for a portrait in a common area on his dorm floor at D'Youville. 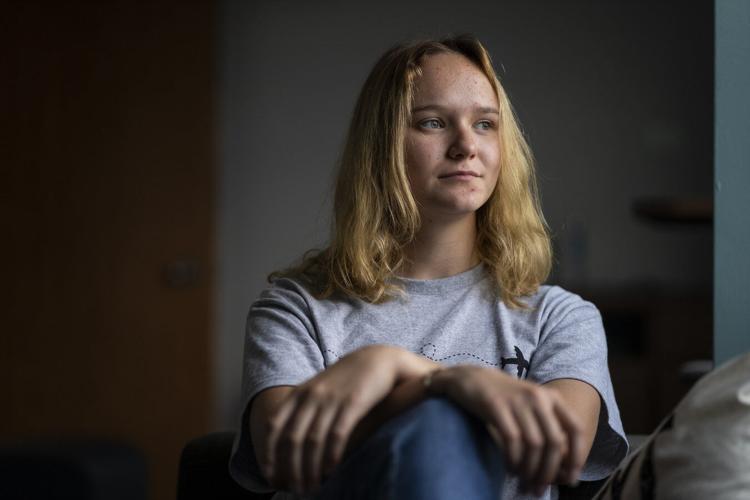 Anastasiia Horova, 17, has traveled from her hometown of Kryvyi Rih to attend D'Youville. 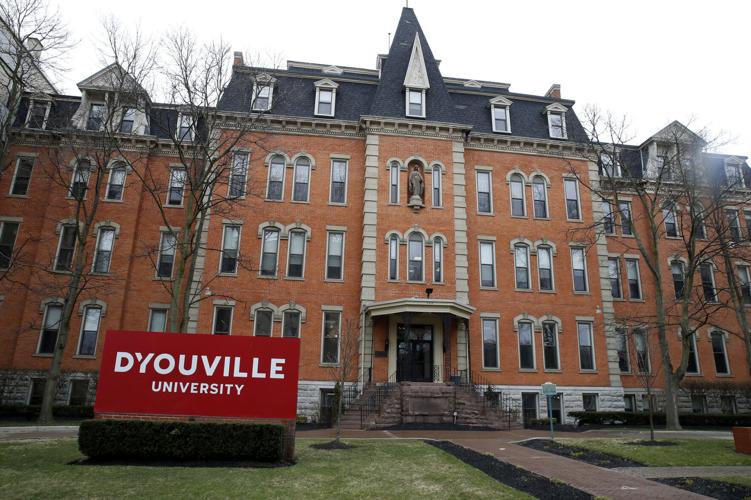 D'Youville University sign on the front lawn of their main Koessler Administration Building on Porter Avenue in Buffalo on Friday, March 25, 2022.

Seventeen-year-old Yaroslav Malynych was soon to graduate from high school and planned to study chemistry at Lviv State University this fall when Russia invaded his home country of Ukraine on Feb. 24.

“For the first two weeks, I wasn’t thinking about education at all,” Malynych said. “My mind was totally messed up. And then after two weeks, maybe a little more, I realized it will be hard to get a normal education in Ukraine during wartime. I started to search for international universities all over the world, especially Europe and North America.”

At the same time, a small university in Buffalo was rallying to offer full scholarships, room and board to 10 Ukrainian students in his situation. His brother sent him a letter from D’Youville University President Lorrie Clemo offering the opportunity on a first-come, first-served basis.

Malynych was the first to respond. He emailed Clemo, and “very quickly got a response – in, like, 20 minutes,” he said. “In two days we had a Zoom meeting, and this is how it started.”

Malynych is among 11 students from Ukraine who recently began classes at D’Youville and are still settling in at their new American school 5,000 miles and an ocean away from their war-torn home. D’Youville was able to accept one more student this year than the 10 it has pledged to bring in every year for the foreseeable future.

Clemo said 10 students a year “may seem like a humble offering,” but it’s a big commitment for a small university whose enrollment stands at about 2,900 students and whose full tuition, room and board amounts to $43,000 per year.

D’Youville joins at least 120 other U.S. universities, including far richer schools like Georgetown, Brown, the University of Chicago and Texas A&M, in providing assistance to Ukrainian students seeking refuge while pursuing higher education, according to a recent survey by the Institute of International Education.

D’Youville began its outreach to Ukrainian students within days of the Russian invasion, Clemo said.

“We had a lot of people working on this from Day One,” she said. “We felt an urgency to respond to what was happening and we wanted to get acceptance letters out ASAP, because we felt this was a lifesaving mission to get these students here.”

Malynych’s home city of Lviv has been hit by a few Russian missiles, but is far from the areas occupied by Russian troops in eastern and southern Ukraine. Ukraine made significant progress this month in retaking occupied territories in the northeast and is pushing forward in the south as well.

Anastasiia Horova, also 17, is from Kryvyi Rih, the largest city in Central Ukraine and only about 37 miles from the Russian occupation in the south. Two days after Russia invaded, her family sent her to stay with her elder sister in Germany. She has since had very limited contact with family in Ukraine out of fear of Russia tracking their cellphone and internet communications.

While in Germany, Horova received a text from the headmaster of her lyceum (high school) about D’Youville’s offer. “I applied and got in,” she said. She is majoring in nursing and feels safe on campus, but when asked how she is faring, her eyes fill.

D’Youville has placed all 11 Ukrainian scholarship students with American roommates on the same floor of its Marguerite Hall dormitory to help them befriend students from their homeland and the U.S.

Ukrainian students complete their primary education in 11 years, not 12 like here, and study English throughout, but Horova said her American roommate has been a big help improving her language skills.

The university has also been taking the students on walking tours around Buffalo and events such as a recent multicultural dinner, providing services like counseling and tutoring and linking them with extracurricular activities including sports, clubs and jobs.

Horova, whose family runs a dog kennel in her hometown, is looking forward to starting a job as a dog handler for the university’s two mascots, Saint and Maggie, Saint Bernards who represent the D’Youville Saints sports teams. She has also joined the cross-country team and was amazed to be able to say she recently “ran to the border with Canada. It’s unbelievable,” she said.

Malynych said he feels confident in his classes, is enjoying experiencing a new place and has made several American friends who have cars and take him on rides around Western New York.

“I have already seen Niagara Falls,” he said. “It’s pretty cool, but a lot of people. It’s too crowded.”

“European cities, especially in Ukraine, are very pedestrian-centric,” he said. “It is a different urban experience here. It’s car-centric and you definitely need a car to move around.”

He is not a sports fan – yet – and finds Buffalo wings “too messy” to eat. But he plans to spent the next four years completing his undergraduate education here thanks to D’Youville’s generosity, he said.

“D’Youville has done a lot for us,” he said. “They fully granted us, and if we have questions, there are a lot of people who can help solve it.”

“It’s unfortunate that a lot of Ukrainians are forced to leave our homes in order to get a good education,” he added. “I want to use my education to rebuild Ukraine. Definitely Ukraine will need to rebuild our education and science sectors, and I want to help with that.”

Horova said she wants to see Niagara Falls and dreams of visiting California. She hopes to be able to afford a winter coat and to pursue her favorite hobby, rock climbing. While chicken wings are out because she’s vegetarian, she loves another local favorite, mac and cheese.

While she worries a lot for her family back home, “I know that Ukraine will win the war,” she said. “I mean, come on! They will win!”

Yet when she thinks about earning her nursing degree in four years, the war still looms.

“My plan when I graduate is, I am going to come back to Ukraine and become a nurse, and I will be a nurse in the Army if the war will not end yet,” she said.

Several of the area's higher education institutions have announced partnerships to expand their offerings and help fuel the WNY workforce.

'I wish our family was complete': A Ukrainian family's journey to Western New York

Maryana Polyak, 42, and her three children arrived in Western New York in July after fleeing from Ukraine to Poland, and then to the U.S.

There are about 237 Ukrainian citizens now in the Buffalo area, said Molly Carr, CEO of Jewish Family Services.

42 North and other local breweries are among 30 worldwide to embrace the Resolve project so far, with proceeds from sales of the beer going to two agencies providing humanitarian aid to Ukrainian fighters, families and refugees.

Yaroslav Malynych, 17, stands for a portrait in a common area on his dorm floor at D'Youville.

Anastasiia Horova, 17, has traveled from her hometown of Kryvyi Rih to attend D'Youville.

D'Youville University sign on the front lawn of their main Koessler Administration Building on Porter Avenue in Buffalo on Friday, March 25, 2022.