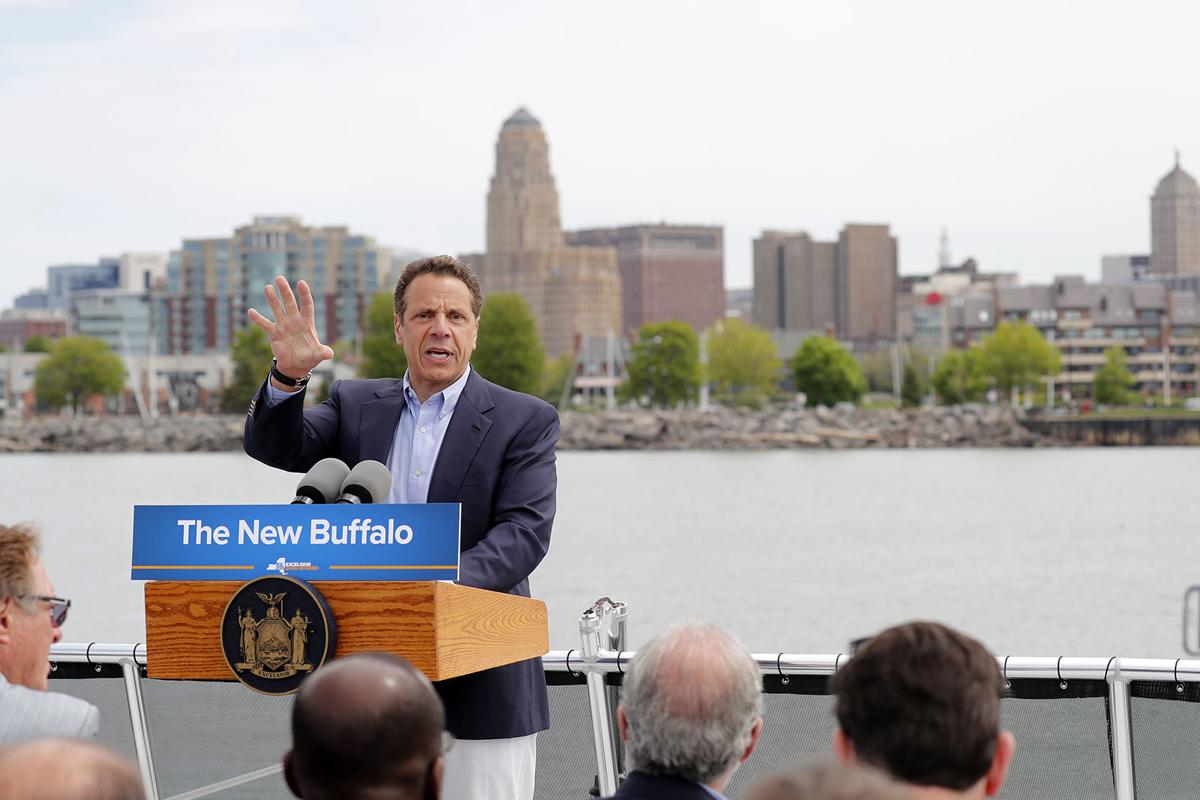 If Gov. Andrew M. Cuomo has presidential ambitions, development efforts like the Buffalo Billion could be a double-edged sword, burnishing his reputation for reviving the upstate economy but also alienating progressives opposed to 'corporate welfare.' (Mark Mulville/News file photo) 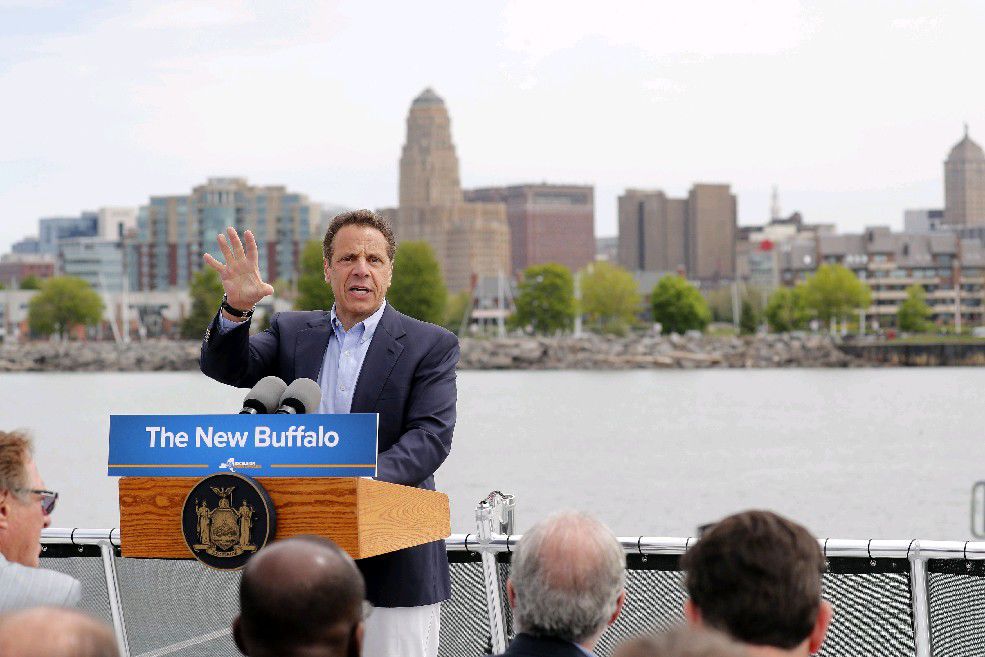 If Gov. Andrew M. Cuomo has presidential ambitions, development efforts like the Buffalo Billion could be a double-edged sword, burnishing his reputation for reviving the upstate economy but also alienating progressives opposed to 'corporate welfare.' (Mark Mulville/Buffalo News file photo)

WASHINGTON – It  must seem familiar to New Yorkers of a certain age. Increasingly, their governor talks not just like a governor, but like a president, in phrases that range from the partisan to the poetic.

Proof came last month, when Gov. Andrew M. Cuomo took to a convention center stage in New York with House Minority Leader Nancy Pelosi at his side, vowing to try to defeat congressional Republicans such as Rep. Chris Collins of Clarence.

In that speech, Cuomo claimed a top spot in the leadership of the Democratic resistance to President Trump and Trump's efforts to make America great again by making government smaller.

"We need a movement to fight back, and that movement starts in New York because New York is always the first," Cuomo said.

Cuomo  has spent virtually all of his 6 1/2 years as governor within the state's boundaries and tending to its problems and needs. But he has spent the past six months speaking out against Trump in ways that make many political observers note the obvious: that New York's governor could be a credible candidate for president in 2020.

Then there's Politico magazine's cover story Friday, which was headlined: "Andrew Cuomo Could Beat Trump – If He Can Win Over the Left First."

And perhaps most tellingly of all, the America Rising PAC – the rabid pit bull of the Republican establishment – attacked Cuomo before it bit into any of the other prospective Democratic contenders. America Rising PAC now devotes an entire page on its website to cutting down Cuomo, featuring headlines such as "Andrew Cuomo’s Unethical Administration Worse Than Previously Thought."

"If they weren't so worried about him, they wouldn't be attacking him so soon," Sheinkopf said.

Aides to the governor often downplay all that 2020 talk, and for good reason. Cuomo is expected to run for re-election next year, and no New York politician ever wants to be seen as caring more about Iowa and New Hampshire than about Utica and New Rochelle.

But the truth about Cuomo's increasing national focus can be found in the mosaic that offers a detailed image of any politician's ambitions: his news release archive.

Cuomo's office issued 57 news releases, statements and other missives largely tied to national or international issues in the first six months of this year. That's less than 10 percent of the total, but it's way more than the 33 such releases from Cuomo's office in the first half of last year, and the measly nine the office put out in the same period four years ago.

In part, Cuomo's increasing national focus is a sign of the times. Many of Cuomo's news releases this year attack Republican health care reform plans that could cost New York $7 billion or more a year. Others attack President Trump's immigration crackdown, which could limit population growth in upstate cities such as Buffalo that have welcomed refugees by the thousands. Given all that, Cuomo  simply could be playing defense, hoping to help his state by fighting Trump's plans.

"If people outside this state are taking notice, all that means is that New York has reclaimed its mantle as a progressive national leader,” Azzopardi said.

Cuomo's list of progressive accomplishments could stand out in what's expected to be a crowded field of Democrats running in 2020, Sheinkopf said.

"He has a very good story to tell at a time when the Democrats seem to be floundering," Sheinkopf said. "He's shown himself to be a governor who gets things done, who can bridge the partisan divide."

Some pundits see another sign that Cuomo will run in the fact that, earlier this year, he hired several former aides to former President Barack Obama and 2016 Democratic nominee Hillary Clinton.

Then again, the path to the Democratic nomination probably won't be easy for Cuomo, for several reasons.

He's hardly the only prominent Democrat speaking out like a prospective national candidate. Biden and Sanders continue to travel the country for speaking engagements, and Warren has been on a book tour. Meanwhile, lesser-known candidates such as Minnesota Sen. Amy Klobuchar and former Maryland Gov. Martin O'Malley have, unlike Cuomo, already paid visits to early primary states.

"From my vantage point in Atlanta, I wouldn't say that Andrew Cuomo stood out more than other people," said Andra Gillespie, an associate professor of political science at Emory University who has written a book about another possible Democratic presidential candidate, Sen. Cory Booker of New Jersey.

A Cuomo candidacy could face other problems, too – and Scott Sloofman, press secretary for America Rising PAC, is more than happy to detail them.

Looming over Cuomo 2020 more than anything else is the coming trial of some of his aides and allies in corruption cases that stretch from Buffalo to Orange County. Those court cases prompted Sloofman to ask: "Are Democrats really going to go for a new candidate with a ton of ethics issues?"

America Rising PAC also takes issue with what it calls Cuomo's "ideological contortions," while criticizing his "Buffalo Billion" for not producing jobs. In addition, the Republican attack group blames the governor in part for recent problems with the New York City subway.

“I can understand why these beltway hacks would want an up-close view of a government that actually works to improve the lives of the people it's supposed to serve. More power to them,” he said.

Those accomplishments could stand out in 2020, but then again, so could concerns about Cuomo's personality and his not-always-progressive record in Albany, said former Assemblyman Richard Brodsky.

Cuomo has feuded famously with several of the state's leading Democrats, including New York City Mayor Bill de Blasio, a leading figure on the left.

"The governor's relationships need repair, and it's not clear he has any inclination to repair them," said Brodsky, now a senior fellow at Demos Action, a Democratic think tank.

Brodsky also noted that job development efforts such as the Buffalo Billion could be seen as corporate welfare, which is not exactly a plank in any progressive platform.

But such job development efforts, along with Cuomo's first-term efforts to cut taxes and state spending, may appeal to the centrist voters Democrats need to win the presidency, Sheinkopf said.

And those less-than-liberal moves don't appear to have destroyed Cuomo's reputation among New York's progressives. In fact, a Siena College poll from May showed that 73 percent of self-described liberals said they have a favorable view of the governor.

Nevertheless, Cuomo's first-term moves have made it difficult for some progressives to fully embrace him, no matter how far left of center his second term has turned out to be.

"He's done some good things, and he's kind of fallen short on other things," said Katrinna Martin-Bordeaux, a Democratic Party and Black Lives Matter activist from Buffalo who supported Sanders in his 2016 presidential campaign.

While praising the progressive legislation Cuomo has passed, Martin-Bordeaux criticized Cuomo's economic development efforts, saying they leave struggling communities behind. To win the support of progressives, she said, Cuomo must move to the left on economic issues while offering a clearer agenda on infrastructure improvements, housing development and foreign policy, among other issues.

"I want to see that he has the heart to do the right thing in the opposition of the haves," she said.

Cuomo's task – and that of any prospective Democratic presidential candidate – is more complex than just that, said Gillespie, the Emory professor. She said any Democratic candidate will have to try to reconcile the party's three disparate constituencies: progressives, voters interested first and foremost in civil rights, and the moderate Democratic mainstream.

And in a poetic passage of his recent speech with Pelosi at his side, Cuomo appeared to attempt to do just that.

Thirty-three years after his father, the late Gov. Mario Cuomo, made himself a potential president with a convention speech that portrayed America as one big family, his son said something eerily similar.

Of course, Mario Cuomo never ran for president, instead just keeping the pundits guessing throughout the early stages of the 1988 and 1992 campaigns.

The unions that represent Canadian customs workers this week voted to strike as soon as Aug. 6 – three days before the Canadian border is set to open again to vaccinated Americans.

If Gov. Andrew M. Cuomo has presidential ambitions, development efforts like the Buffalo Billion could be a double-edged sword, burnishing his reputation for reviving the upstate economy but also alienating progressives opposed to 'corporate welfare.' (Mark Mulville/News file photo)

If Gov. Andrew M. Cuomo has presidential ambitions, development efforts like the Buffalo Billion could be a double-edged sword, burnishing his reputation for reviving the upstate economy but also alienating progressives opposed to 'corporate welfare.' (Mark Mulville/Buffalo News file photo)