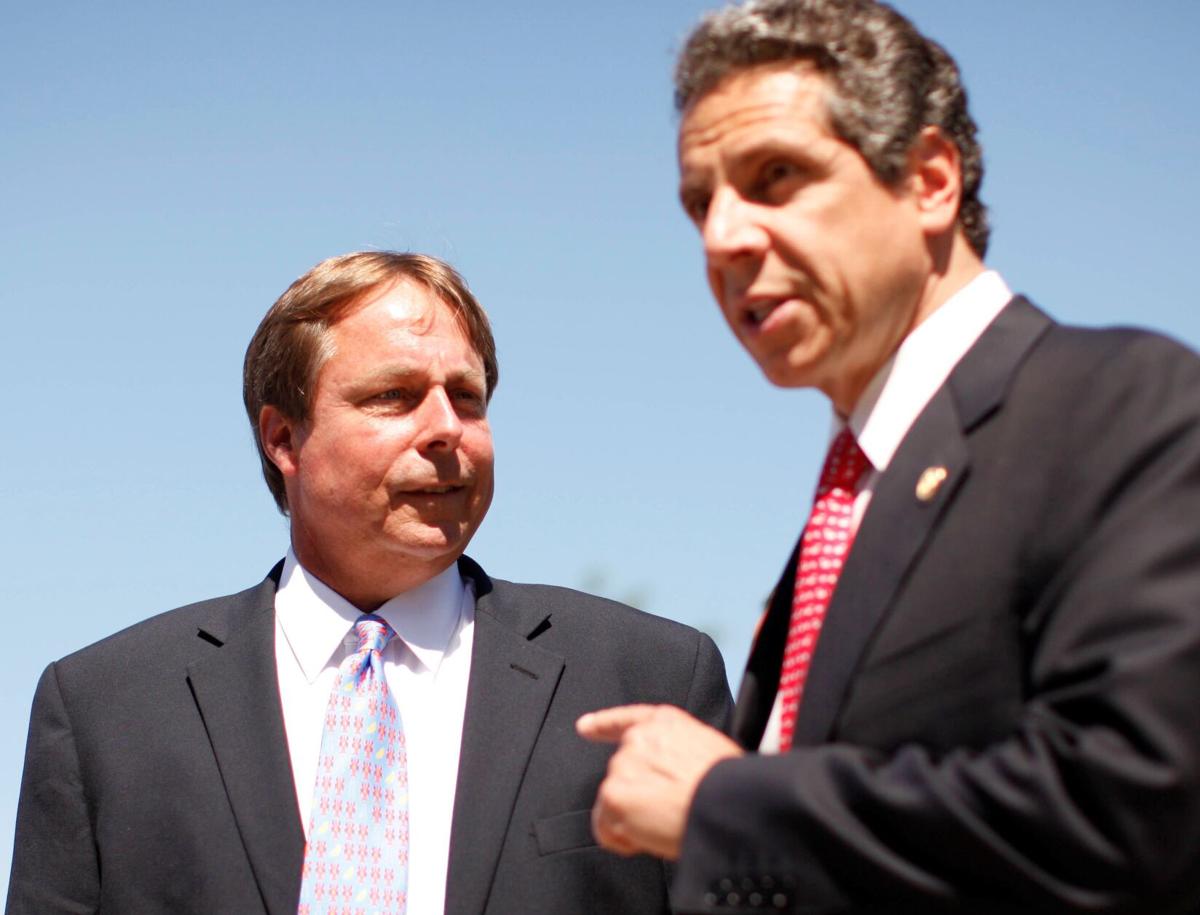 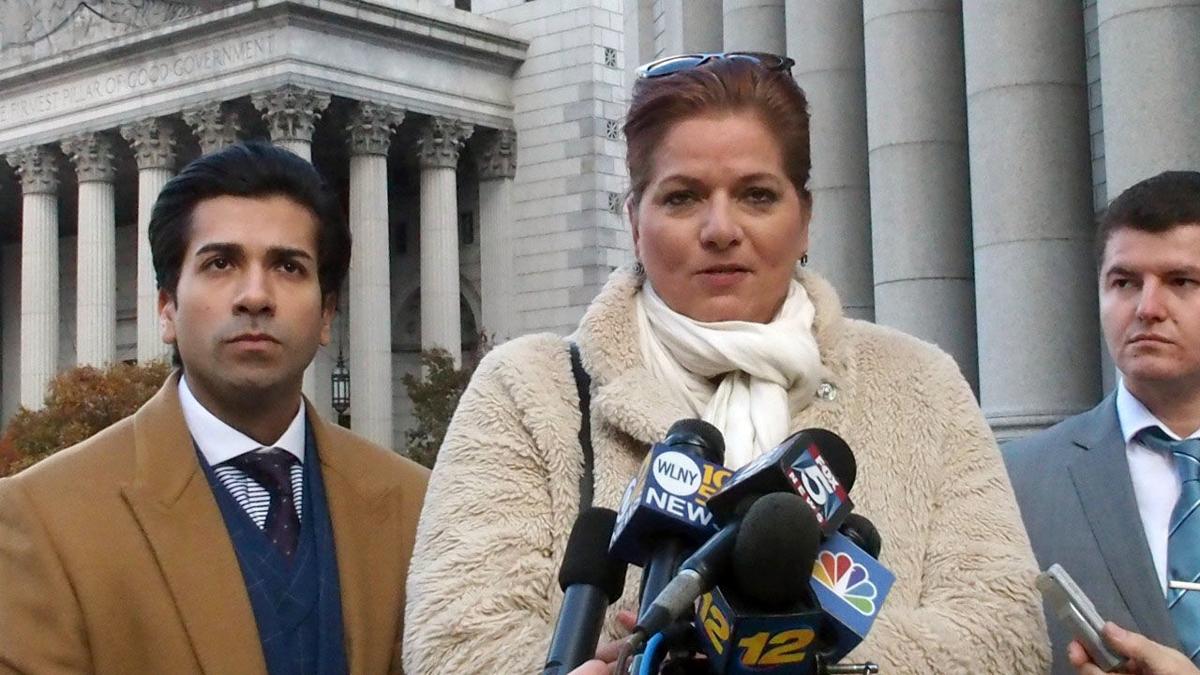 Lisa Marie Cater appeared with her lawyer Paul Liggieri on Sunday in front of the courthouse where she is filing a lawsuit against Sam Hoyt. (Bruce Cotler/Special to The News) 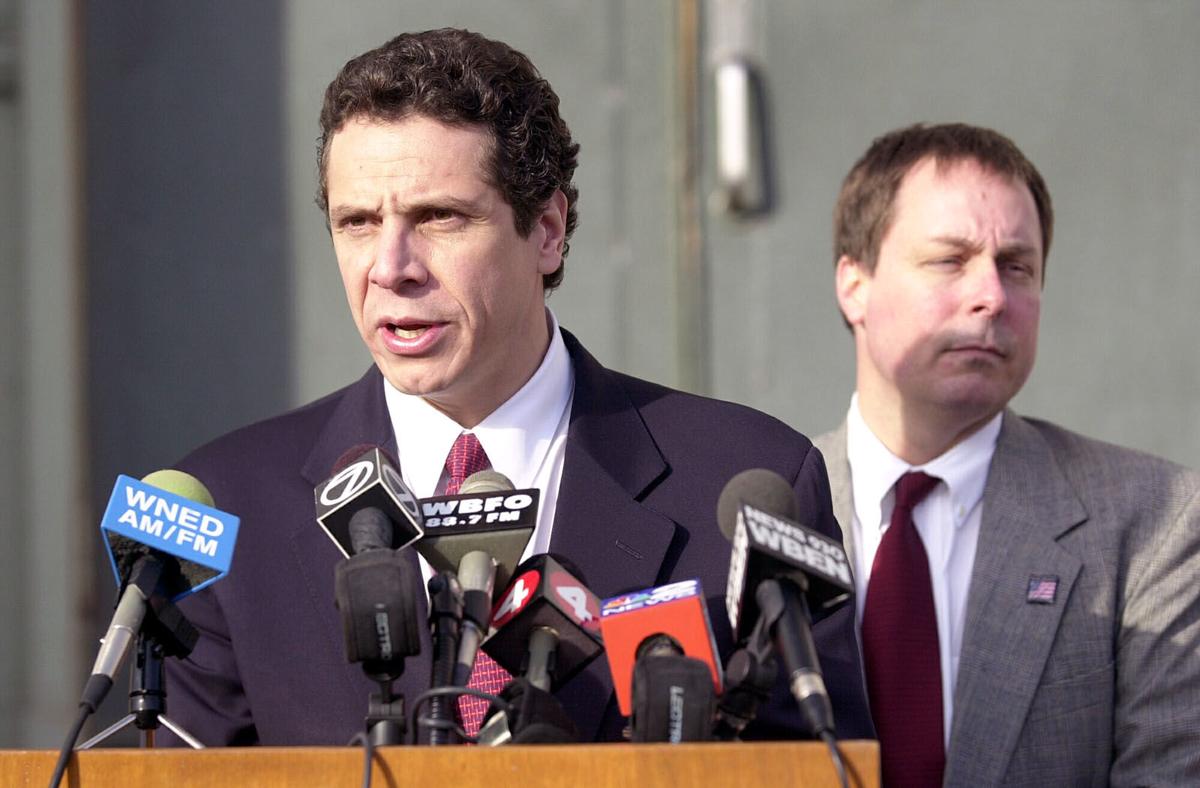 What began as a “flirty” relationship between a state worker and a powerful official now threatens to ensnare the governor of New York.

Andrew M. Cuomo is named in a federal lawsuit that Lisa M. Cater, of Buffalo, filed after she heard some of Cuomo’s top lieutenants praising Sam Hoyt upon his resignation last month as a gubernatorial confidante, even as probes into the former economic development official’s alleged sexual harassment continued.

She alleges that Cuomo ignored her pleas to investigate her sexual harassment complaints against Hoyt, while Buffalo Republicans renewed their questions.

“What did Andrew Cuomo know and when did he know it?” Erie County Republican Chairman Nicholas A. Langworthy asked again Sunday. “And did he and his ranking subordinates help Sam orchestrate what was essentially hush money?”

Administration officials, however, dismissed any idea the lawsuit should enter the political arena.

"This isn't political, and anyone attempting to make it so should be ashamed," said Melissa DeRosa, secretary to the governor. "We take every complaint of sexual harassment seriously, as evidenced by the three separate investigations that ‎stemmed from this complaint. Two of them remain open, though unfortunately Ms. Cater refused to cooperate with investigators' repeated attempts to get to the bottom of her initial complaint."

In a statement, Cuomo's office reiterated it has taken all appropriate steps in the Hoyt matter.

"The administration has been clear, direct and forthright with respect to all state action taken in this matter. Any claims that anyone is hiding behind a suit is not only perplexing but ignores all the responses we have issued thus far in this matter," the statement said.

On two previous occasions since the Hoyt story broke, The News posed questions to administration officials about the case, which have yet to be answered. They were posed a third time Sunday.

• Why did Howard Zemsky, head of Empire State Development, applaud Hoyt’s record upon his resignation when allegations of sexual harassment had been pending for an extended period of time?

• Why did Hoyt leave his job only last month when a probe had been under way for months?

• Was anyone in the administration aware that he paid a state employee in return for her silence and a promise not to seek legal recourse?

• Is the payoff a violation of any state policy?

"The governor's record as a champion speaks for itself," his office said. "He championed the women's equality act, passed the strongest paid family leave in the nation, doubled the child care tax credit, and signed executive orders protecting access to birth control and cracking down on wage discrimination, among other things."

The new development arrives at a time when sexual harassment and its ramifications dominate the nation’s politics. Despite his record on women’s rights, Cuomo finds himself fending off charges his administration ignored Cater’s allegations that Hoyt’s continued attentions were unwelcome and that Albany did nothing about it. The new spotlight also shines on Cuomo as he seeks an expected third term next year and as speculation continues that he may run for president in 2020.

Cater says Cuomo “had direct knowledge” of Hoyt’s “sexual harassment, assault, discrimination and retaliation” against her.

It did not take long Sunday for the politics of it all to begin swirling.

“I think the attorney general should look into this,” Langworthy said. “Was a crime committed by state officials here in Buffalo, N.Y.?”

The chairman asked the same questions late last month after The News reported that Hoyt paid Cater $50,000 to remain quiet and pursue no legal action regarding an affair that she said previously was "flirty" involved a few instances of kissing. Cater said she spoke to The News at the time, breaking the confidentiality agreement she reached with Hoyt, because she was incensed that state officials praised Hoyt when he resigned to pursue a private sector job — while her complaints had long been under investigation.

The Cuomo administration emphatically denies Cater's allegations that the governor ignored her complaints. Alphonso David, counsel to the governor, reiterated Sunday that the state was probing Cater’s charges and that there was never an attempt at a cover-up.

“The state launched three separate investigations in this matter, and any assertion to the contrary is patently and demonstrably false, and as such, we expect this matter to be summarily dismissed,” David said, adding that Cuomo never spoke to Hoyt about the situation.

Politics is by no means absent from the lawsuit filed by New York City attorney Paul Liggieri. It dwells on Hoyt’s ability to award state jobs (he helped Cater get a job with the state Department of Motor Vehicles) as well as his being disciplined by the Assembly in 2009 for his relationship with an Assembly intern.

“Astonishingly, Defendant Cuomo (founder of the Women’s Equality Party) appointed Defendant Hoyt (a wolf dressed in sheep’s clothing) to the senior Empire State Development position despite past claims of sexual involvement by Hoyt with a former Assembly intern when Hoyt served in the Legislature,” the suit contends.

It also alleges that Hoyt used his position as regional ESD president to dole out patronage jobs, and to “seduce, manipulate, sexually harass and sexually assault the Plaintiff without any repercussions.”

Langworthy on Sunday was quick to follow. He questioned why Cuomo awarded Hoyt a job that eventually paid $157,000 per year after the Assembly intern incident.

“It was a poor choice then, and I’m sure the governor would agree with me today — it was a very poor choice,” Langworthy said.

“Sam used the power and prestige of his office for his personal satisfaction and gain,” he added. “The governor, the lieutenant governor and others have been champions of women's issues. This woman certainly did not have a champion.”

Lisa Marie Cater appeared with her lawyer Paul Liggieri on Sunday in front of the courthouse where she is filing a lawsuit against Sam Hoyt. (Bruce Cotler/Special to The News)