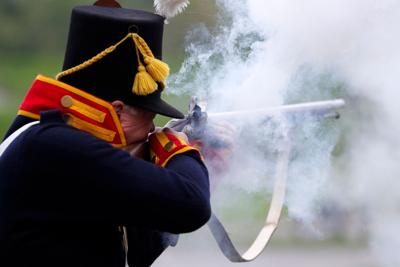 The Angelica Civil War Re-enactment was supposed to return to the village in Allegany County this month, following a two-year hiatus because of Covid-19 restrictions.

But organizers announced last weekend that it's been canceled again.

They blamed New York's new gun laws which they interpret to mean that period re-enactors carrying muskets could be charged with a felony.

"Black powder weapons are not excepted from this ban. Possession of a firearm in public is now a felony," a message posted to the re-enactment group's Facebook page Sept. 4 said. "After obtaining a legal opinion, it was determined that we could not continue with holding the event this year. Participants could be subject to arrest."

But Gov. Kathy Hochul's office said that's not the case.

The confusion has led to at least one other battle re-enactment – in Plattsburgh – being canceled while another at Fort Ticonderoga is proceeding as planned.

At the beginning of September, a new set of gun laws went into effect in New York. Among them are new restrictions on where guns can be carried. The legislation was passed this summer in an emergency session after the U.S. Supreme Court struck down New York's longstanding concealed carry law which required permit seekers to explain why they needed to be able to carry a firearm. Under the new laws, the state now prohibits handguns, shotguns and rifles in a wide list of "sensitive locations" which range from schools, government buildings and courts to parks, churches and sidewalks and other public areas where permitted events are taking place.

That's now considered an E level felony, the lowest level felony which technically can carry a sentence of up to four years in prison.

It's not entirely clear to re-enactment organizers if the new laws apply to events like the Civil War re-enactment in Angelica which commemorates the 136th New York Volunteer Infantry who fought at Gettysburg or the popular "Siege" held every July at Old Fort Niagara which re-creates a battle between British and French forces during the French and Indian War that took place right there in Youngstown.

Re-enactments are often weekendlong events that draw hundreds of re-enactors and thousands of spectators. The re-enactors wear period costumes and carry replicas of muskets and other historic artillery throughout the day. They generally don't use the actual antique weapons because those are too fragile. During demonstrations and re-creations of battles, they use blanks – never live ammunition – to the delight of crowds.

The new law spells out that the definition of rifles to include those that use "obsolete ammunition not commonly available in commercial trade, or that load through the muzzle and fire a single projectile with each discharge, or loading, including muzzle loading rifles, flintlock rifles and black powder rifles."

But it also has exceptions for antique weapons.

Following Angelica, organizers of the re-enactment for the 1814 Battle of Plattsburgh this weekend said some of their events will have to be canceled, according to WAMC Public Radio.

But Fort Ticonderoga is planning to go ahead with its re-enactment of the 1977 Brown's Raid on Sept. 17 and 18 as planned, said Beth Hill, the president and CEO of Fort Ticonderoga.

"Absolutely," she said. "Fort Ticonderoga is staying the course."

The new laws have "some unintended consequences," Hill said. But fort officials have been in contact with legislative representatives and "have a commitment that this will be cleared. .... It just needs to be clarified. We're going to move forward with all of our daily programs and special events."

Hochul's office said Thursday that the new laws allow for historical re-enactments and that the state "will work with legislators and local law enforcement to ensure these events can legally and safely proceed."

There are no more battles planned for this year, so there's no need to make immediate changes, he said. "In the longer term, however, we are deeply concerned. We were surprised and shocked when we learned that the new gun law includes flintlocks and other muzzle-loading firearms," Emerson said.

State Sen. George Borrello (R-Sunset Bay), who has been a vocal critic of the new gun laws, said it's his understanding that replica weapons are among the kinds of firearms that are prohibited from newly designated sensitive locations.

"All it would take is a complaint by someone," Borrello said, for a re-enactor with a replica musket to face arrest. "These organizers don't want to put folks in jeopardy. That's what it comes to."

Old Fort Niagara has staged battle re-enactments since 1980 and has a solid safety record, Emerson said. He said the firearm activity is regulated by both the state Department of Labor and the U.S. Bureau of Alcohol, Tobacco, Firearms and Explosives.

"Our events use only blanks and we invite only vetted participants. We observe strict safety rules and have been successfully staging these events safely and professionally for over 40 years," Emerson said. Live ammunition is banned from the events, he said. "It is all blank ammunition," he said.

The re-enactments are hugely popular and help teach the public about actual historic events. They're also critical to their budgets.

"We are heavily dependent on these events," Emerson said.

He hopes that the state can ensure that such events can continue in the future. Emerson said the fort's board is meeting Monday to consider a resolution on the issue.

"We're not trying to criticize. Just please understand what all of our sites are facing," Emerson said. "We hope that the New York State Legislature will amend this law when they return to the next legislative session."

The Editorial Board: Reassure the re-enactors and clarify New York’s gun law

If event organizers have concerns, justified or not, they deserve to have them addressed, either by clarifying the existing legislation or, if necessary, by amending the legislation.

"Any gun-banner rejoicing in Chief District Judge Glenn Suddaby’s ruling should read the rest of the 78-page decision before celebrating," writes Rod Watson. 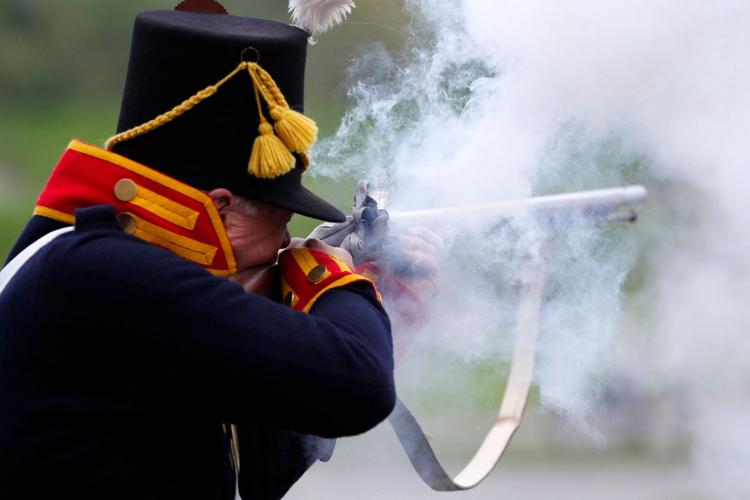 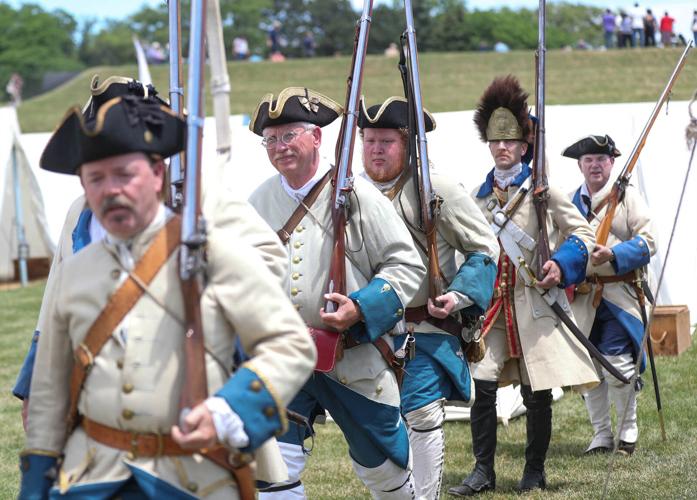 French Marine re-enactors march to the battlefield during the annual French and Indian War Encampment at Old Fort Niagara on Saturday, July 2, 2022. 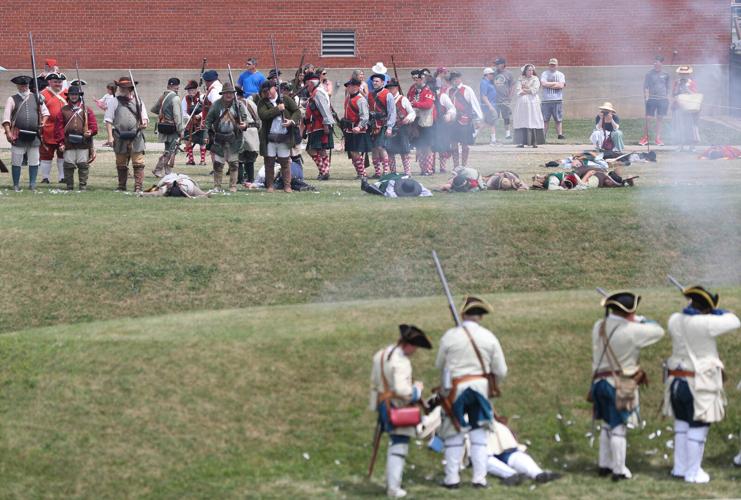 British militiamen suffer casualties from their French counterparts during the annual French and Indian War Encampment at Old Fort Niagara in July.