The harrowing effort by a Coast Guard diver to reach an occupied vehicle caught in the churning Niagara River just 50 yards from the brink of the American Falls drew international notice Wednesday.

The rescue attempt ended with the somber news that the woman in the vehicle was already dead before the diver was lowered by helicopter to the vehicle, opened the passenger door, pulled her out and lifted her to shore.

But this realization did not diminish the daring actions of the diver, who braved strong winds and swift-moving currents to reach the vehicle and recover the victim’s body.

In fact, this was only the latest example of intrepid rescuers receiving widespread publicity for venturing into the waters above the cataracts to try to help someone.

Wednesday afternoon’s incident had a sad ending, though the endeavor as it happened was gripping to watch.

Witnesses reported seeing a vehicle occupied by a woman go into the Niagara River somewhere between the vehicle bridge and the pedestrian bridge that connect mainland Niagara Falls, on the American side, to Goat Island.

Rola would not say whether the vehicle entered the water accidentally, or intentionally, a fact that remains part of the ongoing investigation.

The vehicle drifted downriver until it became lodged in the riverbed, about 10 yards or so from the mainland shore and about 50 yards upstream from the precipice of the American Falls.

The vehicle, a black sedan, faced toward the bridges while its rear end was pointed toward the falls with its trunk open. The river currents washed up over the front windshield, while water rushing by the sides reached halfway up the doors.

Ultimately an air rescue was determined to be the only safe option for reaching the car because divers were not able to secure a lifeline with two points on land that would have allowed them to enter the water from the shore, Rola said.

The New York Power Authority had lowered water levels during the incident to allow easier access to the vehicle for the rescue attempt.

A police drone was used to read the vehicle's license plate, check how many people were in the vehicle and attempt to determine whether the occupant was alive or dead.

The Coast Guard copter arrived at the scene at about 1:55 p.m. and began to hover over the partially submerged vehicle. After several minutes, a diver in an orange suit holding an ax, edged out the door of the aircraft and was slowly lowered toward the vehicle.

As the rotor wash whipped up the river’s current, the diver managed to reach the vehicle, grab onto it from the passenger side and open the front passenger door.

As dozens of onlookers, including members of the public, media and emergency responders watched intently from the riverbank, the diver raised his arm to signal to the copter’s crew that he had reached the occupant.

The diver, holding tightly onto the woman’s body, was lifted into the air and lowered carefully onto dry land at about 2:15 p.m. Emergency personnel swiftly surrounded them.

Rola said no movement was observed in the vehicle in the period leading up to the rescue attempt and a state park official confirmed the woman was dead before the Coast Guard diver got to her.

Police were able to read the license plate and identify the owner of the vehicle, though it wasn't clear whether that was the woman who was pulled from it. There were no other occupants.

Rola said the woman was in her late 60s and was from this area but declined to further identify her. There was no information provided about a cause of death.

“Saddened by the tragic loss of life at the Niagara River today,” Gov. Kathy Hochul tweeted later Wednesday afternoon, while praising the “heroic” response at the scene.

The car remained in the water as of midafternoon and Rola said police were waiting to determine how to safely remove it from the river.

He said he did not believe there were any items of value as potential evidence left behind in the vehicle. He added that police did not find anything left by the vehicle’s occupant on shore.

Coverage of the rescue attempt on social media drew global attention. It was the most recent in a long line of frightening incidents above and below the falls along the U.S.-Canadian border.

In one of the most recent cases, from 2019, high water levels may have helped save the life of a Canadian man who plummeted over the Horseshoe Falls.

The man, whom police described as "in crisis" when he jumped into the Niagara River, was the fifth person since 1960 known to survive a trip over the 188-foot-high falls without being inside a barrel or ball.

In another case, also from 2019, a man who had gone into the upper Niagara River ended up clinging to a log but later broke free after struggling with firefighters who had secured a flotation device to him.

A state park police major saved him when he reached out from a spot along the river’s edge, grabbed the man as he drifted in the river about 75 yards from the falls and pulled him to shore.

Given how frequently people travel to Niagara Falls, on both sides of the border, to attempt to take their own lives, state parks crews have installed emergency crisis hotline phones in and around Goat Island. People contemplating self-harm can also call the 24-hour National Suicide Prevention Hotline at 1-800-273-8255.

"Cause and manner of death is still yet to be determined through autopsy," New York State Park Police Capt. Christopher Rola said in a statement.

The Editorial Board: Even training for operations such as Wednesday's is rife with risks

'This isn't something that we train for every day': Coast Guard swimmer describes tense falls rescue attempt

“As I was coming down on the cable, the only thing that was going through my head was, ‘How am I going to get to this survivor?’ ” said Petty Officer 2nd Class Derrian Duryea, who did not know at the time that the woman was already dead.

State Parks officials unsure how to remove stuck car. Windy weather may do it for them.

New York State Parks officials haven't figured out a way to remove the car in which a Williamsville woman died Wednesday from the brink of Niagara Falls without endangering more lives.

Sean Kirst: At the brink of Niagara Falls, a wonder of the world collides with otherworldly courage

It is a high-profile reminder – played out at one of the most famous places on the continent – of the level of courage these Coast Guard teams often display in rescues no one sees.

Stuck car appears to have plunged over falls

New York State park police said no one reported seeing the vehicle go over the brink, so it couldn't be specific about when it might have occurred.

President Biden says the 'second amendment is not absolute,' after Texas shooting 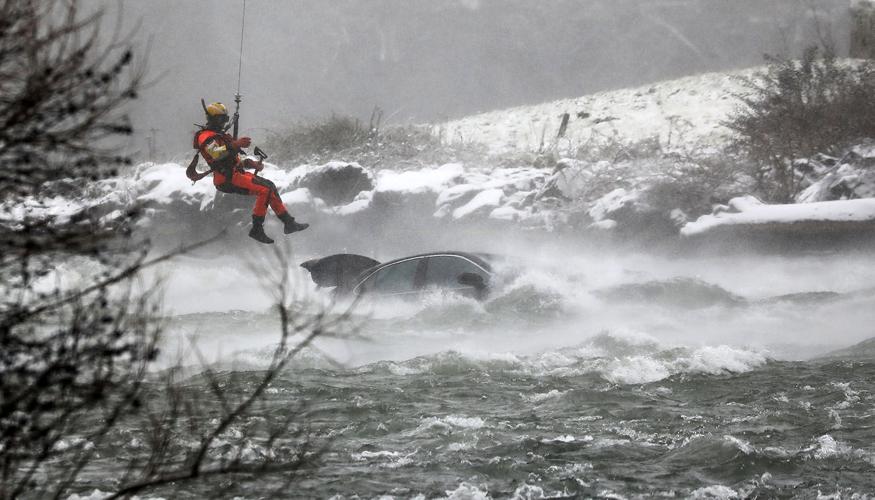 A U.S. Coast Guard rescue diver prepares to remove the passenger of a vehicle at the brink of Niagara Falls, Wednesday, Dec. 8, 2021. 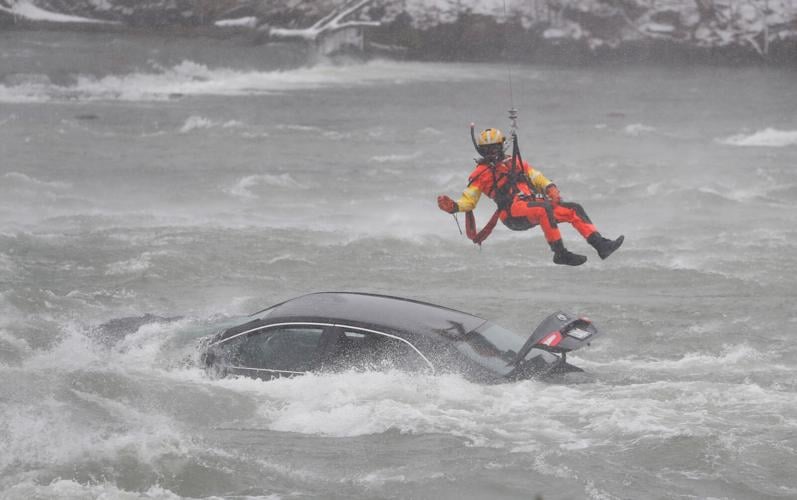 A member of the U.S. Coast Guard is lowered to a car at the brink of Niagara Falls. 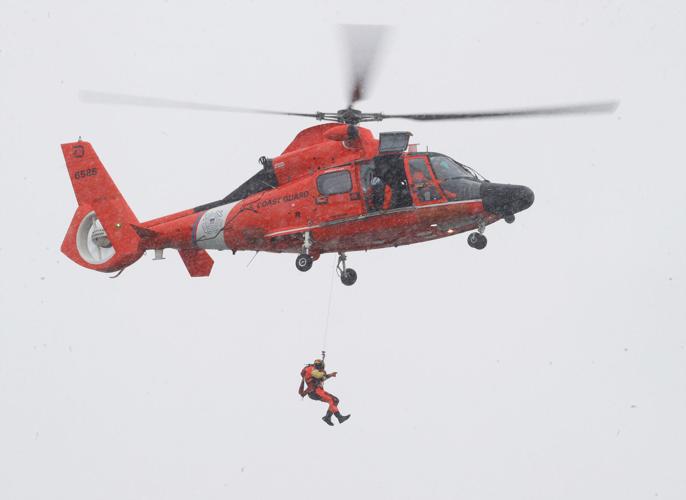 The U.S. Coast Guard is lowered to recover the body of a woman driving a car that went into the Niagara River at the brink of the American Falls near Prospect Point, Wednesday, Dec. 8, 2021. 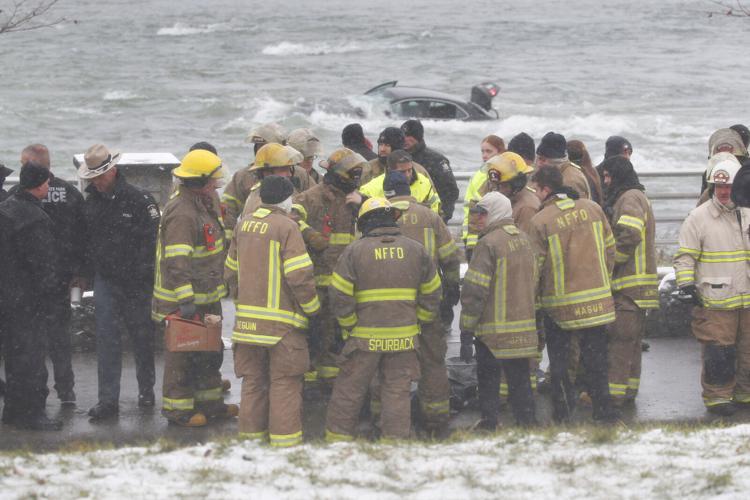 First responders surround the body of a woman that was recovered when a car went into the Niagara River at the brink of the American Falls near Prospect Point, Wednesday, Dec. 8, 2021.