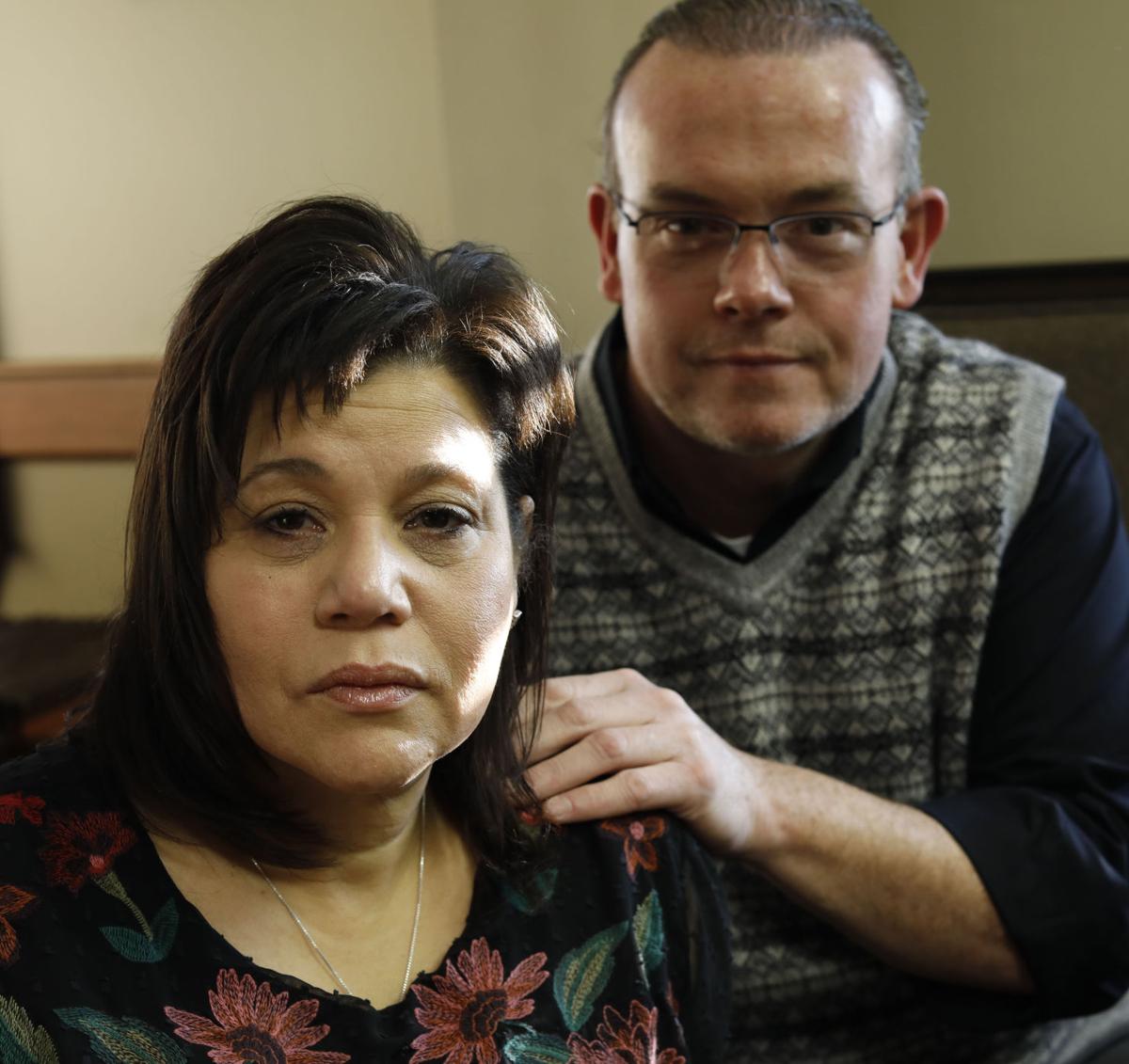 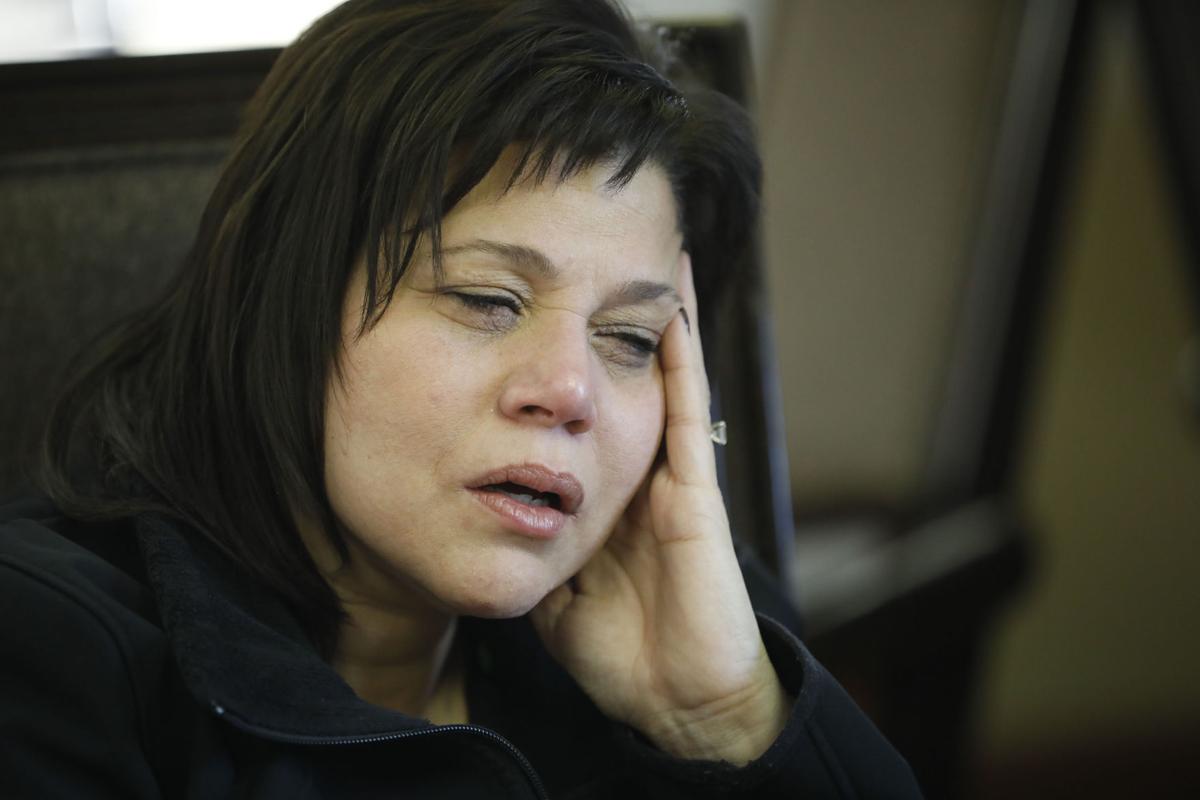 Yvonne Rodriguez-MacDonald talks about losing her memories after being injured when a fan fell on her at a Buffalo Bills game in 2018. (Derek Gee/Buffalo News) 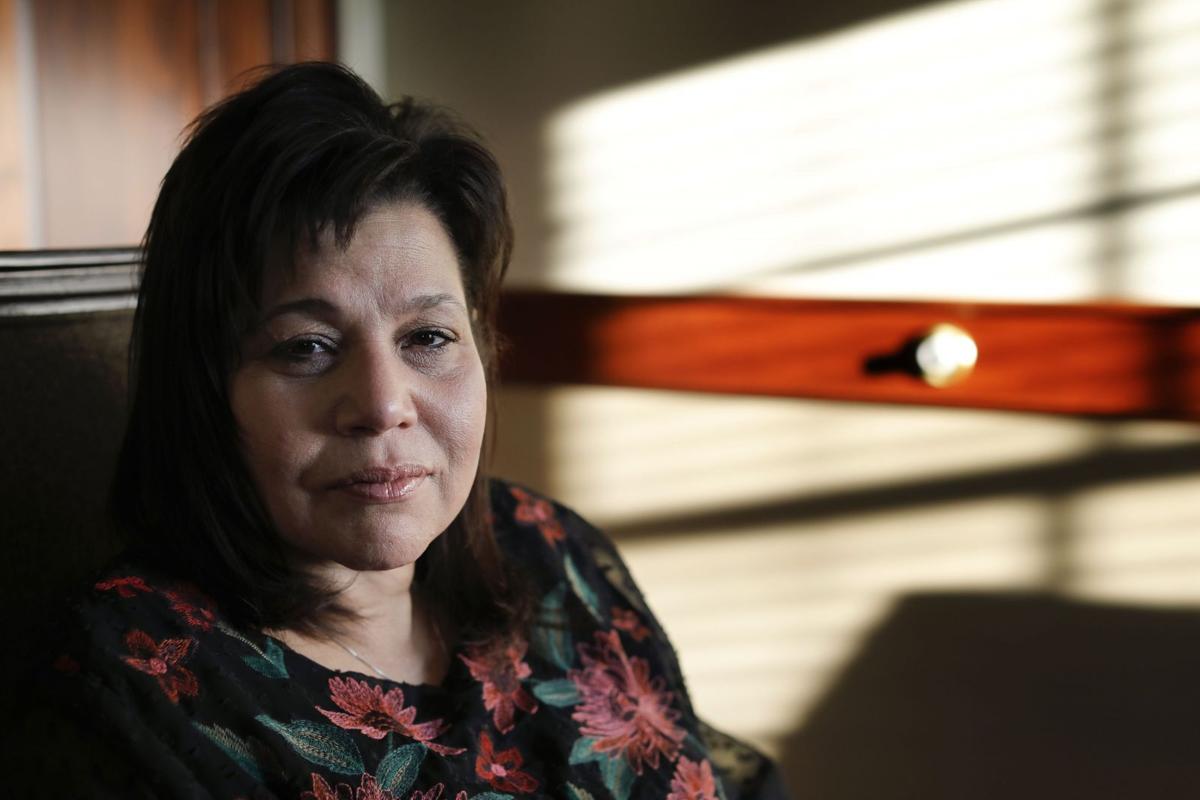 Yvonne Rodriguez-MacDonald said that when she got hit in the head in a bizarre accident at a Buffalo Bills game, she lost 53 years of memories – including her wedding and the births of her two daughters.

The Buffalo schoolteacher said she no longer remembers events from her childhood, her education or anything else that happened in her life before the Bills-New England Patriots game on Oct. 29, 2018.

During that Monday night game, Rodriguez-MacDonald and her husband, Kevin MacDonald, sat in Section 310 at New Era Field, watching the Patriots put another beating on the Bills.

As the Patriots rolled to a 25-6 win, some jostling among fans in the fourth quarter led to an accident that – according to a State Supreme Court lawsuit – dramatically changed the lives of Rodriguez-MacDonald and her family.

The collision caused Rodriguez-MacDonald to suffer a “serious brain injury,” according to the MacDonald family's attorney, Chris O’Brien.

The incident was captured on a Bills' security video that is part of the evidence in the case.

“Imagine sitting in your seat at a Bills game, with thousands of other people, and suddenly, with no warning, this happens to you. Someone falls on you, you get struck in the head, and all your memories from before that day are gone,” O’Brien told The Buffalo News. “It’s horrific.”

“Yvonne has never been the same since that instant,” said her husband, Kevin MacDonald, 51, in an interview. “For the first couple months, she would just sit on the couch, not saying anything. She had dizzy spells, vomiting and balance issues. It took us a while to realize it because she hardly ever spoke, but we began to see that she didn’t remember anything that happened before that night. She didn’t remember people, their names or any of the things she did.”

He said he and the couple’s two daughters – Marissa, 19, and Lauren, 17 – have since tried to help Rodriguez-MacDonald “rebuild her life” by showing her pictures of people and places, and explaining what roles they played in her past.

“It’s frustrating,” said Rodriguez-MacDonald, 54, who spoke to a reporter in a soft, halting voice. “When this first happened, I couldn’t get myself dressed. I couldn’t sign my name, I didn’t even know how to sign my name. … I still can’t work or drive a car. I need people to take me everywhere.”

The Town of Hamburg woman began to cry when a reporter asked if she remembers her wedding or the childhood years of her two daughters.

Lauren MacDonald said she especially recalls one painful incident that occurred about a week after her mother was hurt.

“I was standing on a stairway, and Mom just looked at me and said, ‘What’s your name?’ I said, ‘I’m Lauren,’ ” Lauren recalled. “She has forgotten so many things. She forgot that I want to play lacrosse when I go to college, even though we talked about it so many times.”

Rodriguez-MacDonald said she is treated by a medical team that includes a brain trauma doctor and a cognitive therapist.

Could a freak injury at a football game cause a profound memory loss?

It happens far more often than most people realize, said Dr. Gary Galang, a physician who specializes in treating brain injuries at the University of Pittsburgh Medical Center in Pennsylvania. Galang is not associated with the MacDonald case.

Since 2000, Galang said he and other doctors in the medical center’s brain injury rehabilitation program have treated “tens of thousands” of people for memory loss caused by head injuries.

“Memory loss is a common finding with brain injuries. It could be caused by a massive injury to the skull, or a small hit that affects a part of the brain that is very susceptible to trauma,” Galang said.

About 2.8 million people were treated for traumatic brain injuries in 2014, according to the U.S. Centers for Disease Control and Prevention. The government agency said 65% of the injuries that resulted in emergency treatment were caused by unintentional falls or someone being unintentionally struck in the head. The 2014 statistics are the most recent available, the agency said.

“A patient can get their memories back, but the longer the problem goes on, the harder it becomes to retrieve old memories,” Galang said.

The lawsuit accuses a Bills fan, Ryan Guy Chimenti of Whitby, Ont., of shoving the woman who fell and causing Rodriguez-MacDonald’s injuries. Three companions from Whitby who were at the game with Chimenti – identified in court papers as Patrick Bernard Chimenti, Daniel P. Chimenti and John B. Kalbfleisch – were also named as defendants in the lawsuit, in addition to two companies who provide security services for the Bills. The security companies are U.S. Security Associates of Roswell, Ga., and Buffalo Protection & Investigations of North Tonawanda.

Daniel Chimenti told a News reporter he was aware of the lawsuit, but declined to discuss anything that happened at the Bills-Patriots game.

“That’s her prerogative. It’s a free country,” Daniel Chimenti said when asked for his reactions to the lawsuit.

None of the other men from Whitby – 43 miles northeast of Toronto – returned calls seeking their comment. Spokeswomen for the two security companies declined to comment, saying they did not want to discuss a matter that is in litigation. None of the defendants has filed any response in court papers.

A Bills spokesman had no immediate comment when contacted by The News earlier this month, but said the team may comment after examining court documents.

Kevin MacDonald said he was upset at the Bills’ security and emergency health personnel. He said they took a “very apathetic” attitude toward his wife’s injury and kept asking her if she had been drinking. He said his wife was briefly examined in a stadium health emergency office.

“Yvonne and I did go to a tailgate party before the game. Yvonne had one or two drinks there, no more than two,” Kevin MacDonald said.

According to Kevin MacDonald, people in the health emergency office told his wife she should get evaluated by her personal doctor, which she did the next day. He said he and his wife had to walk to their vehicle about a half-mile from the stadium because no one from the Bills offered a ride.

So far, the Bills organization has not been named as a defendant, but O’Brien said his law office is continuing its investigation into the incident and may add other defendants. At this point in the litigation, the attorney has not specified a dollar figure for alleged damages.

Based on what the investigation has turned up so far, O’Brien alleged that Ryan Chimenti was visibly intoxicated when he allegedly shoved the football fan in front of him. The attorney obtained a security videotape of the incident, which he supplied to The News.

No recollection of being shoved

O'Brien said the Bills provided him with a security video that showed "the exact section of the stadium at the exact time this happened."

According to the lawsuit, the woman in the red scarf landed on Rodriguez-MacDonald, who was seated, and struck her in the head.

After Kevin MacDonald gave The News a possible name for the woman in the red scarf, a reporter reached out to Michele Cournan, 51, a former Buffalo resident who now lives near Schenectady. Cournan confirmed that she is the woman who fell down and landed on Rodriguez-MacDonald.

"I fell forward and my head definitely hit her head," recalled Cournan, who was not hurt. "I apologized to the lady. I don't know who she is."

Cournan said she does not know what caused her to fall, but told The News she does not recall "being intentionally pushed by anyone."

"We were all celebrating a play in the game. People were jumping up and high-fiving each other, and I lost my balance," Cournan said.

When told that the lawsuit alleges that she was intentionally shoved by a fan behind her, Cournan repeated that she does not recall anyone shoving her.

“She may not know what caused her to lose her balance, but the video clearly shows that she and the man standing next to her went flying because of a shove from the man behind them,” said O'Brien, the MacDonalds' attorney.

The lawsuit alleges that security officials hired by the Bills failed in their responsibility to "properly control and monitor" spectators in the section where the accident occurred. The security companies are responsible for supervising the sales of alcohol and "all aspects of alcohol compliance" at the stadium, the lawsuit alleges.

Stadium security workers had visited Section 310 earlier in the game "to address behavior by the Chimenti Defendants," the lawsuit claims.

“Buffalo Bills games are wonderful sporting events,” O’Brien said. “We believe the vast majority of these people go there for the right reasons – to enjoy the spectacle and cheer for their team. But some people who go to these games are very irresponsible. Some of these people seem to go there to drink and not to watch the game.”

Kevin MacDonald, who also is a Buffalo school teacher, described himself as a lifelong Bills fan who has attended at least 150 Bills games. Because of this incident, he said he will never attend another Bills game.

“In terms of quality of life, I think Yvonne is getting more alert. Her speech, her coordination and balance are better than they were,” he said. “But in terms of lost memories, I don’t think our daughters or I will ever get her back.”

“I don’t like being in crowds anymore,” Yvonne Rodriguez-MacDonald said. “I don’t feel safe.”

Joseph R. Scott III was charged with three counts of first-degree robbery and one count of attempted robbery, police said.

Yvonne Rodriguez-MacDonald talks about losing her memories after being injured when a fan fell on her at a Buffalo Bills game in 2018. (Derek Gee/Buffalo News)