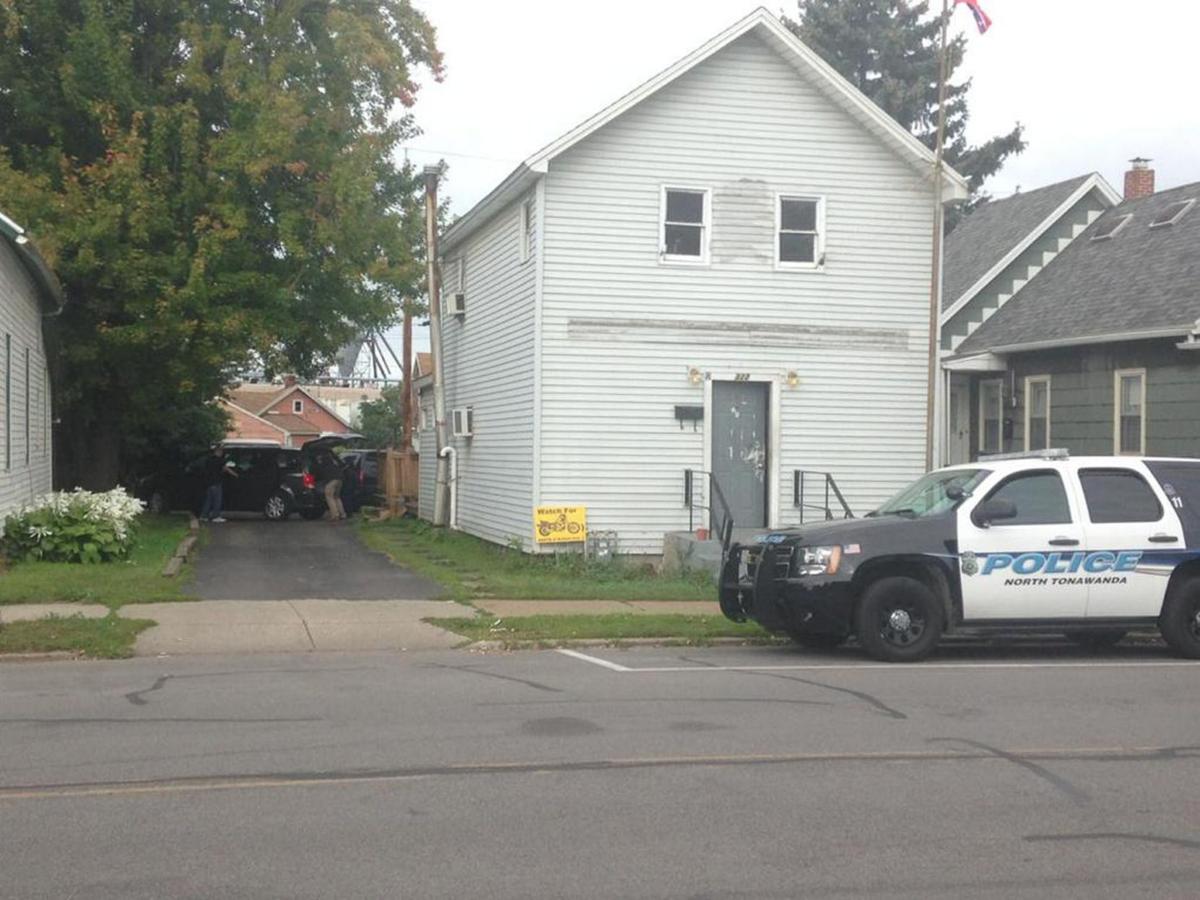 State and federal authorities raid a Kingsmen clubhouse in North Tonawanda on Wednesday. 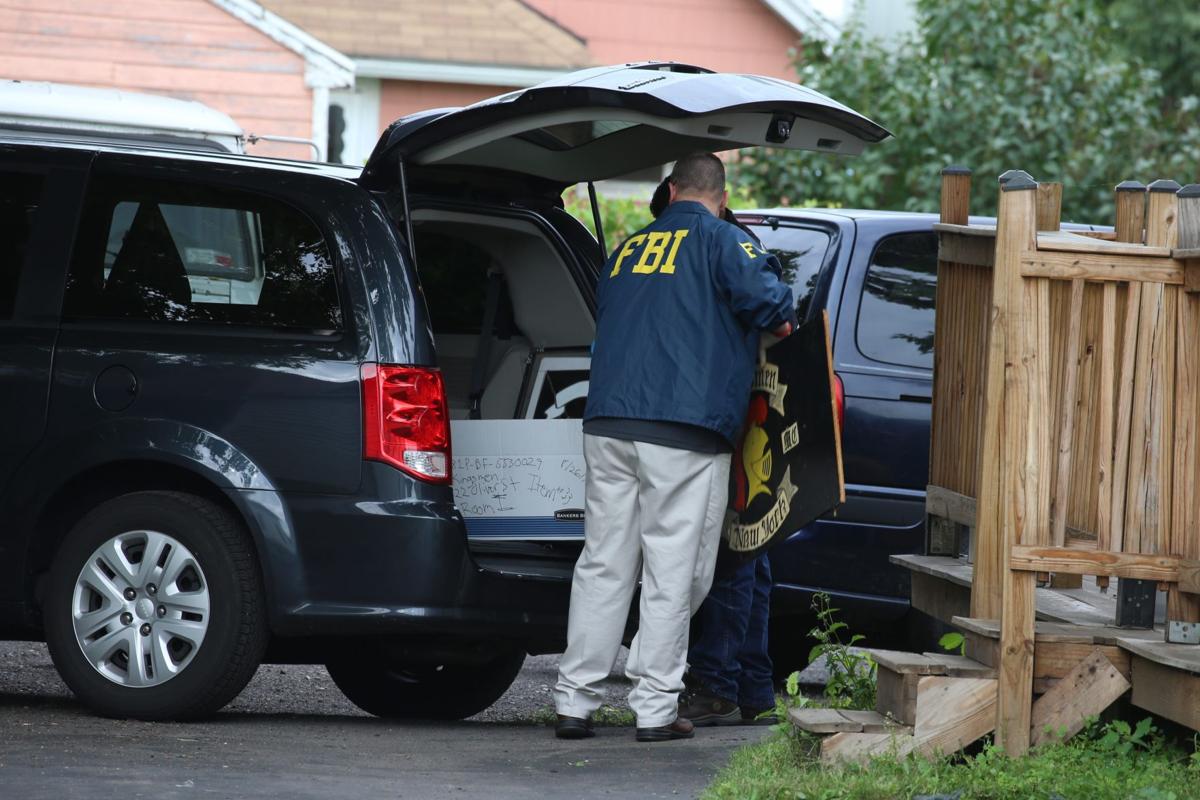 The FBI, State Police and North Tonawanda police were involved in a raid at the Kingsmen motorcycle club’s house at 322 Oliver St., North Tonawanda, among six other clubhouses on Wednesday. Police removed boxes of items and put them in unmarked vans.

Police and federal agents came looking for guns and drugs.

That’s where they would find evidence that shows whether the club’s members are operating a criminal enterprise – what law enforcement would need to take the gang down.

The raids come less than a week after Andre Jenkins, 36, of Deland, Fla., who, according to a jailhouse informant, called himself “an enforcer” for the Kingsmen, was convicted of first- and second-degree murder in the execution-style slayings of two men. Paul Maue, 38, of Buffalo, and Daniel “DJ” Szymanski, 31, of Getzville, were found shot to death Sept. 6 in a car parked in the lot behind the Kingsmen’s clubhouse in North Tonawanda, which was among those raided Wednesday. Jenkins could face life in prison when sentenced.

But his defense attorney, Dominic Saraceno, said after the conviction that Jenkins had been offered a plea that might have brought him freedom after 25 years if he testified about what he might know about the national president of the Kingsmen motorcycle club. Jenkins turned it down.

“He was not willing to cooperate against his brother Kingsmen,” Saraceno said.

Deputy District Attorney Doreen M. Hoffmann said in her summation at the trial that she believed the killings were ordered by David Pirk, national Kingsmen president, who according to witnesses accompanied Jenkins to Western New York early last September.

An Olean Kingsmen member who received immunity from federal prosecution, Roger Albright, testified that only Pirk could have ordered the killing of fellow Kingsmen.

But Wednesday’s raids weren’t about any one member of the Kingsmen.

Investigators are going after the whole operation – which law enforcement believe is the most effective way to fight organized crime.

Law enforcement authorities have been investigating the Kingsmen criminal enterprise since before last September’s homicides, a law enforcement source said.

The Kingsmen are suspected of being involved in an array of criminal activity. “You name it, they do it,” the source said.

While investigators continued to look into the Kingsmen operation while the double-murder case progressed, they waited until after the conviction to execute the search warrants, the law enforcement source said.

The FBI’s Safe Streets Task Force and the State Police Bureau of Criminal Investigation and Special Operations Response Team, along with local police forces, took part in the raids, a law enforcement source with knowledge of the operation said. The Safe Streets Task Force, made up of FBI and local investigators, has played a key role in dismantling organized crime operations in the region, including the 10th and 7th Street gangs on the West Side of Buffalo, as well as bank robbery rings.

In front of the clubhouse, U.S. and Confederate flags were flying.

Neighbors were buzzing about the rude awakening they experienced Wednesday morning.

“Did you hear that loud bang?” asked Al Kastlelan, 82. “It sounded like a shotgun. I thought somebody hit my building.”

Many of the residents who gathered outside called members of the motorcycle organization “good neighbors.”

“They don’t cause any problems on this block,” Kastelan said. “They protect me. They’re always outside when I’m sleeping. I have no complaints.”

Kastelan and his wife have lived in the same address on Oliver Street for 55 years. For that reason, many on the street call him the “mayor of Oliver Street.”

Another man familiar with the Kingsmen said he believed the clubhouse was occupied at the time of the predawn raid.

“There’s always somebody there, 24-7,” said the merchant, who declined to give his name. “What I heard was a flash bomb that blew the door open.”

The merchant, who said Kingsmen members never gave him any problems, expressed surprise at the timing of the raid.

“They’re always quiet,” he said, “except for the shooting.”

He saw police file into the house and cart away items including signs.

“Everything with the Kingsmen on it has been removed,” Baughman said.

The clubhouse has been quiet for sometime, he said. He was surprised the raid took until now. “It was a little later than I thought they’d come,” he said.

“Me, personally, I’m kind of glad,” he said of the raid. “I’d like the town to be more regular people.”

In Niagara Falls, the 2400 block of Cudaback Avenue was blocked off for about two hours before police left around 10:30 a.m., neighbors said. “I saw them pulling stuff out and looking through it,” said Casandra Szurgot, who lives on the block.

He saw about a dozen police vehicles, including some marked “Homeland Security,” in the street.

Two burly men at the clubhouse refused to be interviewed. The front door was left open for a time, and what appeared to be a bar was visible along with some tables and chairs strewn about.

The Falls clubhouse is a two-story brown brick building with a steel awning. The building is in the name of the Kingsmen Motorcycle Club, and its taxes are current, except for a $245 county tax bill from 2014.

“I’ve been here four years, and I’ve never had a problem with them,” Szurgot said.

“They’re very friendly,” said the man who wouldn’t identify himself.

An elderly woman, who lives near the clubhouse and wouldn’t give her name, said the Kingsmen shooed intruders out of her yard and gave her a large supply of leftover food from one of their picnics.

Szurgot said there are some large gatherings of bikers “a couple of times a year.” She said, “They’re only here for a couple of hours when they are here.”

She said she has experienced the group’s friendliness, too. “They got my kid a Big Wheel and put Kingsmen stickers all over it,” Szurgot said.

Why these coffins hang from cliffs in the Philippines

Why these coffins hang from cliffs in the Philippines

Dozens of dogs left in Afghanistan after U.S. evacuation

Dozens of dogs left in Afghanistan after U.S. evacuation

Opposition demonstration banned by authorities in Kinshasa suppressed by police

Opposition demonstration banned by authorities in Kinshasa suppressed by police

Cheektowaga cops asked to search homicide suspect's home, but he wanted to talk to lawyer

Accused of what prosecutors have previously called a "savage beating," Yuriy Bruks faces a second-degree murder charge in the death of his wife, Tetiana.

Deshawana Taylor, 27, was charged with a felony count of second-degree assault, along with child endangerment and unlawfully possessing noxious material.

Trooper who was run over during protests sues driver, Buffalo police

A New York State trooper who was run over in 2020 during racial justice protests on Buffalo's East Side has filed a lawsuit in state court against the Buffalo Police Department and the driver who struck him.

Jayquan A. Roland, 21, and Shantelle M. Heard, 28, each were charged with two felony weapons counts and felony possession of stolen property.

State and federal authorities raid a Kingsmen clubhouse in North Tonawanda on Wednesday.

The FBI, State Police and North Tonawanda police were involved in a raid at the Kingsmen motorcycle club’s house at 322 Oliver St., North Tonawanda, among six other clubhouses on Wednesday. Police removed boxes of items and put them in unmarked vans.