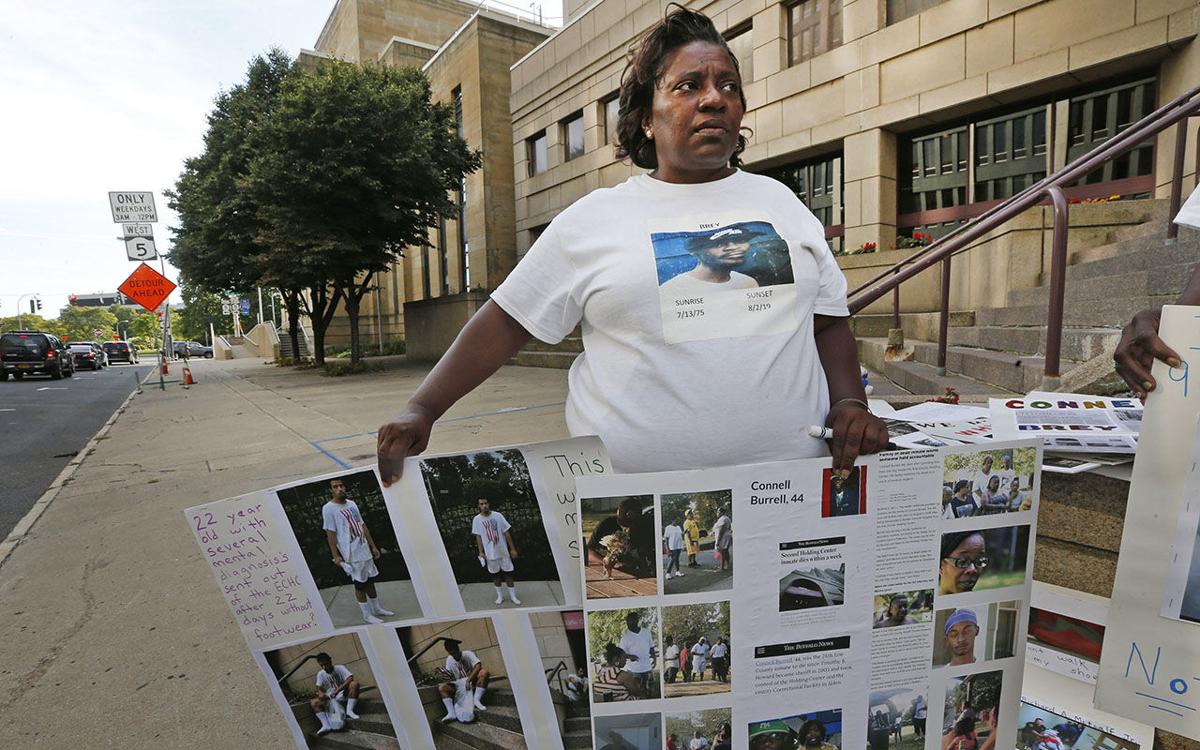 Monica Lynch protests the death of her brother, Connell Burrell, who died while he was an inmate at the Erie County Holding Center. (Robert Kirkham/Buffalo News) 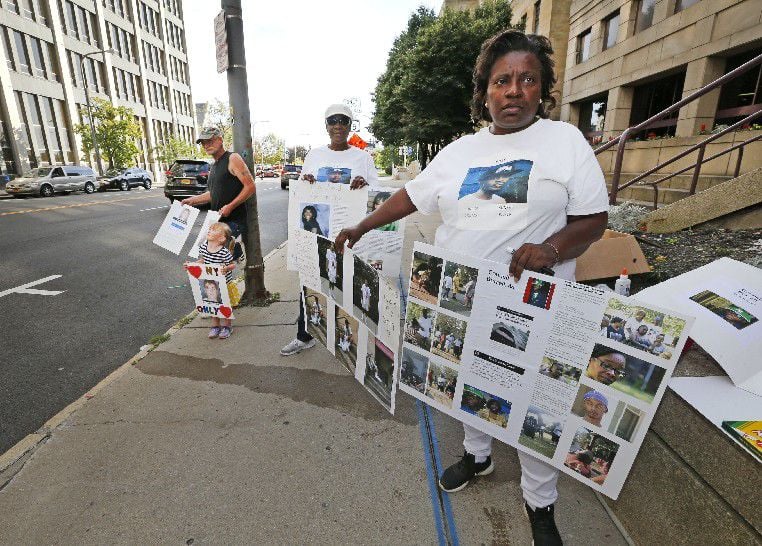 Monica Lynch was among those who assembled days ago to again protest the conditions inside the Erie County Holding Center. Lynch's brother, Connell Burrell of Buffalo, died on Aug. 2 after missteps by the jail's medical staff. (Robert Kirkham/Buffalo News)

The records, which provide the first full account of what happened, show Burrell's blood sugar crashed to dangerously low levels after he was given a large dose of jail-provided insulin.

With Burrell sweating and confused, Holding Center nurses tried to restore the diabetic man's glucose with, among other things, a peanut butter sandwich. That's exactly what an expert in the field says they should not have done.

Soon after, the inmate suffered an apparent seizure. Then his heart stopped. And remnants of the sandwich snarled efforts by ambulance medics and emergency room doctors to force air into his lungs.

The medics and doctors fought to keep Burrell's heart pumping after he collapsed around 10:30 p.m. on July 31 – roughly 12 hours after being placed in the jail.

But his condition did not improve. With family members standing by, he died the morning of Aug. 2 in Buffalo General Medical Center.

Aside from that disclosure, Sheriff Timothy B. Howard and his aides have kept a lid on their information about Burrell and his treatment inside the jail, citing a federal health privacy law. The Howard team told Burrell's next of kin that handing them the jail's medical record would violate the dead man's "personal privacy."

That's unlike the stance taken at Buffalo General. Its doctors and nurses compiled summaries of Burrell's treatment – in the jail and in the hospital – and those summaries were given to Burrell's family. The News has the summaries, as well as the ambulance medics' record of their efforts to save Burrell.

"I think they've just got improper procedures in the Holding Center," said Monica Lynch, a sister of Burrell who was with him when he died.

"They are not properly taking care of people," she said. "This could have been prevented."

Burrell lived in the city's Broadway-Fillmore neighborhood. He was 44 and small in stature, about 5 feet, 7 inches tall and 110 pounds. One of his shoulders would  separate easily, making manual labor difficult, his sister said.

In 2016, Burrell was diagnosed with Type 2 diabetes; his system did not produce enough insulin to maintain safe levels of glucose, the body's main energy source. For the last couple of years, he had been able to test his glucose on his own and prevent it from going too high, Lynch said. He also had been diagnosed with chronic obstructive pulmonary disease, which made it harder for him to breathe.

Burrell entered the Holding Center on July 31. He was to serve 15 days after a misdemeanor drug possession charge was lowered to disorderly conduct.

Incoming inmates are questioned about their medical needs, and that afternoon Burrell's blood sugar was checked. The medical record indicates that around 2:30 p.m. it was 368 milligrams per deciliter, which the American Diabetes Association considers high, according to ADA literature.

Four hours passed before the jail's medical team addressed Burrell's glucose level, the medical record indicates. By then, it was higher, 528 mg/dl.

Sometime between 6:30 and 7:30 p.m., the inmate was given an injection of insulin that appears to be supported by the jail's policy on diabetic care – 14 units of subQ humalog, according to the medical record. He was returned to his cell.

The American Diabetes Association says insulin delivery should be timed with meals to effectively process glucose. But after reviewing the steps taken at the Holding Center to lower Burrell's blood sugar, a doctor at Buffalo General wrote that he didn't know if Burrell ate something with that dose of subQ humalog.

"Later that night," the doctor continued, "he was found on the floor."

It was around 10 p.m. Burrell's blood sugar had plummeted.

The ADA recommends taking immediate steps if a person's blood sugar falls below 70 mg/dl. Burrell's, according to the record, was 26.

Had he received too much insulin?

Jennifer Jennings has a doctorate degree as a nurse practitioner. She's a former level one trauma nurse who taught nursing at Georgetown University and now serves as medical director of Cardea Health Integrative, a practice she founded and owns in East Aurora.

One unit of insulin is required to drop blood glucose by 50 mg/dl, Jennings said, citing guidance provided by the University of California, San Francisco.

Based on that guidance, Burrell received enough insulin to drop his glucose level by 700 mg/dl.

"I would have started at seven to eight units," Jennings said.

It's better to use less insulin at first and then reassess, she explained.

Burrell was confused and sweating but able to walk to the jail's infirmary, the medical record says. He was given glucose, both orally and with an injection. The record indicates Burrell also was given a peanut butter sandwich.

Articles in health journals say peanut butter can help restore blood glucose, but they note the risk in giving peanut butter or any solid food to someone with blood sugar as low as Burrell's; the patient could have trouble chewing and swallowing.

Dr. Paresh Dandona is a distinguished professor at the University at Buffalo's Jacobs School of Medicine and Biomedical Sciences. He also founded the Diabetes-Endocrinology Center of Western New York and serves as its medical director. Like Jennings, Dandona has no connection to the Burrell case.

"That treatment was wrong, in my view," Dandona said of the move to give Burrell solid food. In fact, Dandona would have balked at liquids, too. He would have provided glucose only intravenously.

"Even if you are somewhat conscious, you are not fully conscious," he said of a patient with blood glucose in the 20s. "Your swallowing may be wrong, or not adequate. Any fluid that may be given could go into your windpipe. Or into your lungs. The same could happen with solid food.

"To be given a sandwich to chew," he said, "is an impossible undertaking."

Medics try to save him

Burrell's inability to get the food down complicated matters for the ambulance crew, which was called around 10:30 p.m.

With Burrell in cardiac arrest, the medics tried to insert a breathing tube through his mouth and into his airway. But their first try failed. In their record of the call, medics from AMR say that secretions, such as blood and vomit, were in the way.

As four minutes ticked by, the medics tried again. This time, the "procedure was successful," their record says.

While the tube would help the medics force air into Burrell's lungs, he had no pulse. They tried multiple rounds of chest compressions and gave him three doses of epinephrine, or adrenaline, with no immediate success, the record says.

Finally, at 11:22 p.m., they "achieved sustained pulse," according to the summary compiled at Buffalo General.

Burrell's heart had been stopping and starting, albeit weakly, for 45 minutes.

At the hospital, the emergency room staff noted the "extensive vomitus" on Burrell's face and around the tube. When they tried to replace the breathing tube for another that would attach to a respirator "extensive suctioning" was needed, the medical record says.

A doctor wrote that he suspected the patient had a hypoglycemic seizure – a seizure caused by low blood sugar – and "aspirated" by breathing in foreign matter, such as food or vomit. At that point, he went into "hypoxic arrest," the doctor wrote. Burrell's heart had stopped from a lack of oxygen.

Another of Burrell's sisters, Krystal Avant, decided it was time. With doctors asked to take no further lifesaving measures, Burrell died around 7:20 a.m. on Aug. 2, three days after entering the Holding Center. His survivors included a teenage son.

Avant said she had talked with her brother in the jail by phone between 8 and 9 p.m. on July 31 and he seemed fine. The next morning, someone from the Holding Center alerted the family that he was in Buffalo General, and they should hurry to the hospital, she said.

The Holding Center has had other bad outcomes with diabetic inmates. Craig Beatty nearly died when Holding Center personnel failed to give him his insulin over two days in 2005, even as he asked for it repeatedly. Like Burrell, Beatty's arrest, after a dispute with an Elma merchant, disrupted his regular management of his condition. Erie County settled his lawsuit for $150,000.

At the time, the sheriff controlled the jail's medical team. That changed in 2009.

As the U.S. Justice Department bore down to force more humane conditions in the Holding Center and the county Correctional Facility in Alden, the county health commissioner took control of the medical staff. Sheriff Howard went along, reasoning that health professionals were best overseen by a health professional.

In 2017, Howard returned to past practice by creating a "division of correctional health" under his control and the control of his appointees. A court-appointed monitor did not oppose the move.

Six Erie County inmates have died since then, continuing the rate of an inmate death every six months or so during Howard's 14-year oversight of the Holding Center and Correctional Facility.

Monica Lynch protests the death of her brother, Connell Burrell, who died while he was an inmate at the Erie County Holding Center. (Robert Kirkham/Buffalo News)

Monica Lynch was among those who assembled days ago to again protest the conditions inside the Erie County Holding Center. Lynch's brother, Connell Burrell of Buffalo, died on Aug. 2 after missteps by the jail's medical staff. (Robert Kirkham/Buffalo News)