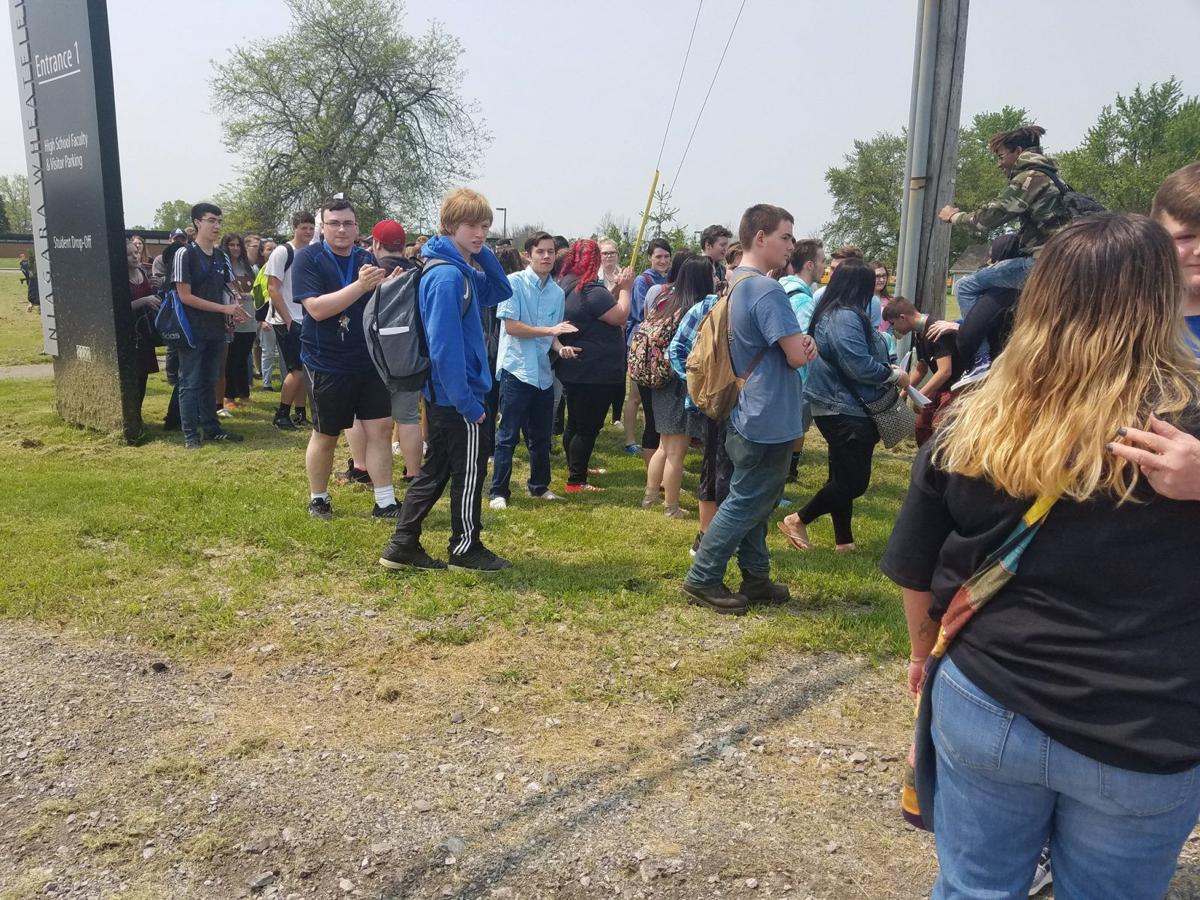 Around 100 students took part in a walkout at Niagara Wheatfield High School Friday despite an announcement by Principal Michael Mann of "consequences." (Thomas J. Prohaska/Buffalo News) 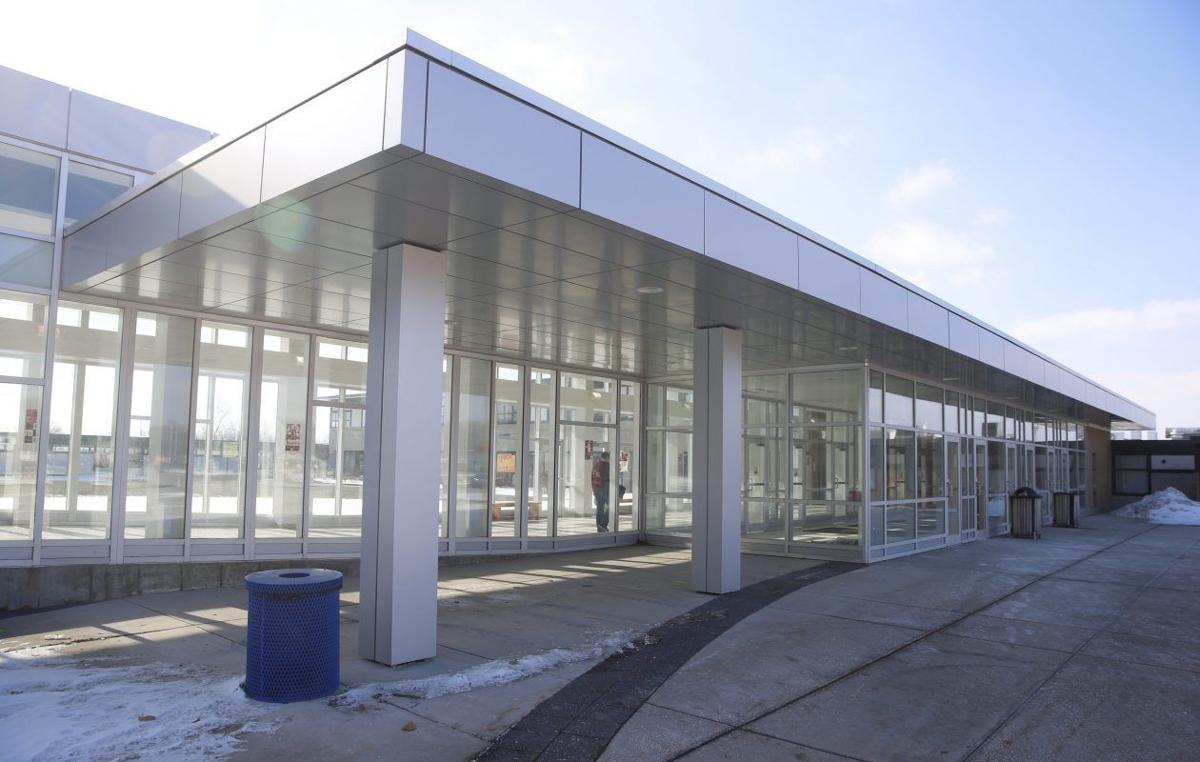 The Niagara Wheatfield Senior High School student who attended school throughout this entire academic year with the girl he raped was removed from school Friday, according to a statement on the district website. (John Hickey/Buffalo News file photo)

The Niagara Wheatfield Senior High School student who attended school throughout the academic year with the girl he was convicted of raping was removed from school Friday, according to the school district.

But about 100 students at the school walked out of classes at noon Friday to protest the district's handling of the case.

"Please be advised that the student in question will not be returning to school for the remainder of the school year, is not permitted on school property and will not be in attendance at any co-curricular events," Superintendent Daniel G. Ljiljanich wrote.

Elias Q. Dowdy, who turns 19 Saturday, pleaded guilty to third-degree rape May 23 in Niagara County Court. The crime occurred a year ago this week, and Dowdy was arrested July 31, court records show.

Despite that, Dowdy was not suspended and was allowed to play on the school's lacrosse team.

Other students said Dowdy told friends he would be allowed to attend the senior prom and the graduation ceremony.

Ljiljanich issued a statement Thursday afternoon which said he had just learned of the student's guilty plea. He followed up Friday with the announcement that the student had been removed from school.

During Friday's walkout, students, many wearing turquoise ribbons on their shirts, chanted that they wanted justice for the girl. The girl's mother, who The Buffalo News is not identifying, denounced the district's handling of the case.

"I am shattered and appalled at how the district has handled this entire situation," the mother told reporters. "Injustice piled on top of the despicable act against my daughter makes her a victim over and over again."

A few other parents came to the protest, including Danielle LaCombe, who criticized the school administration for threatening students who took part in the walkout.

"Our kids are taught that nonviolent protest is what produces change, but then our kids are discouraged from protesting something they feel strongly about," LaCombe said.

Before the walkout, principal Michael Mann could be heard over the loudspeaker telling students who were concerned about the case to meet with staff and counselors in the school auditorium.

"Justice has been served," he announced. "I have been telling you that there are consequences for walking out of the building. If you want to be supportive, there's an acceptable way to do that, and that is to come down to the auditorium. For those who wish to disrupt the school environment, and their interest is not in seeing that justice has been served, which it has, then we have consequences for students who walk out of the building."

Some students said they were threatened with suspension or not being allowed to take final exams.

About 20 minutes into the walkout, Mann, who declined to be interviewed, walked into the group of students and said, "This looks more like a party than a peaceful protest."

The students had set up two loudspeakers, which played the song "We're Not Gonna Take It" at top volume – until a Lewiston police officer pulled the electrical plug out of the outlet.

The slow dispersal of the protest was left to Lewiston Police Chief Frank Previte and two of his officers, who told the kids to either go back into the building or go home. Most went home; some of them had been signed out by their parents before the protest began.

One student refused to take either option and kept yelling at Previte, who scuffled with her. The girl fell and was hustled away by another officer, who talked to her for several minutes. Previte said the girl would not be arrested.

Friday, Ljiljanich wrote that there was "misinformation circulating regarding when the District learned that a student pled guilty to unlawful conduct in court."

"It was not until yesterday, May 30 – and in the afternoon, that the District was shown a document (not provided a copy) from Niagara County Court indicating that a student had pled guilty. As such, claims made prior to the afternoon of May 30th that the District was allowing a convicted felon to participate in school or co-curricular activities are not accurate in that the District was not made aware of the status or result of the criminal proceeding by the individuals and/or entities involved.  As previously indicated, we are now in a position to address the situation directly and will do so," Ljiljanich wrote.

The girl who was raped told The Buffalo News on Thursday that, on one occasion, she went to the school's in-school suspension room to feel safe from Dowdy, whom she accused of going out of his way to walk near her despite an order of protection from Town of Niagara Court.

"I don't think anyone should have to go to school and see the person who's ruined/changed their life," the victim said in a text message Thursday.

In County Court Friday, Judge Sara Sheldon issued an order of protection for the girl that would be in effect until sentencing July 25. Sheldon closed the courtroom to the public, but before the session Assistant Public Defender David E. Blackley said a Town of Niagara Court order of protection expired several months ago.

Dowdy faces a maximum of four years in state prison, but he is also eligible for youthful offender status.

A judge granted youthful offender status to Elias Q. Dowdy, now 20, and placed him on probation for 10 years for raping a fellow student two years ago.

The lawsuit represents the first time the state has sued a school district for allegedly violating federal and state laws requiring schools to provide a safe environment for students.

Around 100 students took part in a walkout at Niagara Wheatfield High School Friday despite an announcement by Principal Michael Mann of "consequences." (Thomas J. Prohaska/Buffalo News)

The Niagara Wheatfield Senior High School student who attended school throughout this entire academic year with the girl he raped was removed from school Friday, according to a statement on the district website. (John Hickey/Buffalo News file photo)