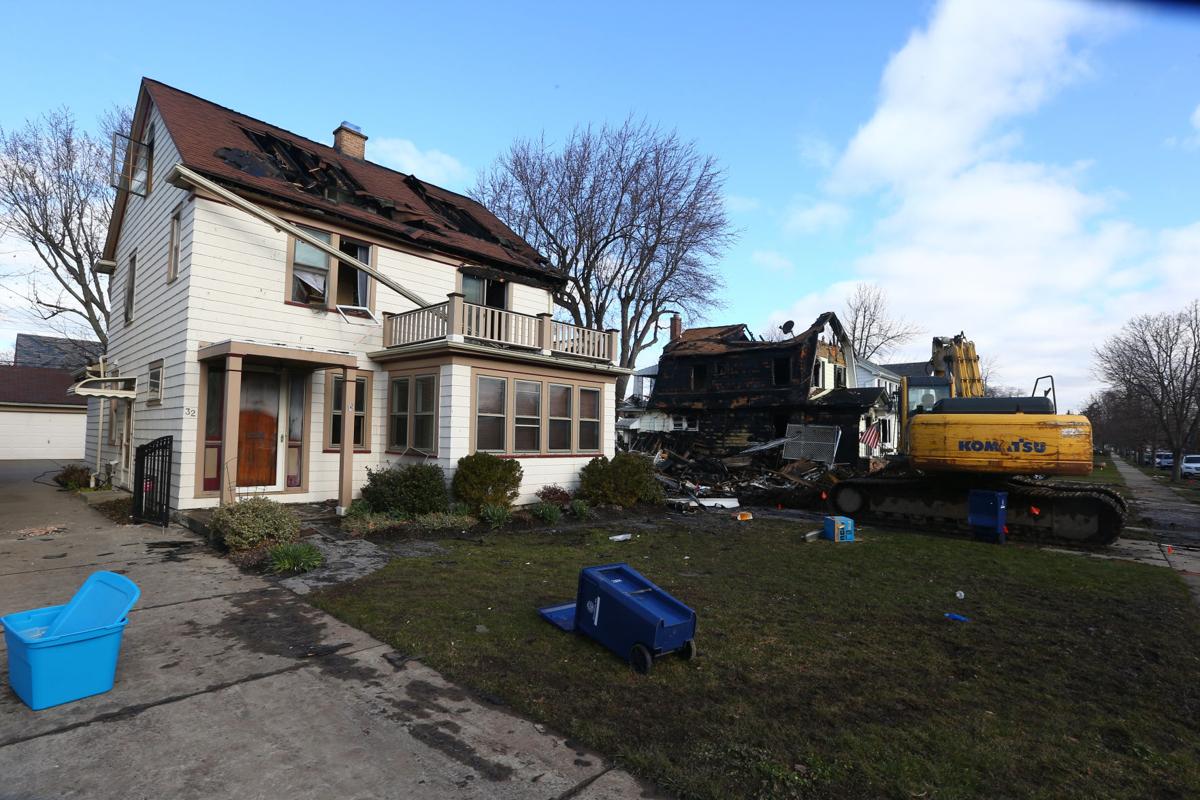 Wreckage left of home, center, that blew up in an explosion and burned homes on either side. on Covington Road. Police said the resident of the center home flooded the home with natural gas in an apparent suicide attempt. (John Hickey/Buffalo News) 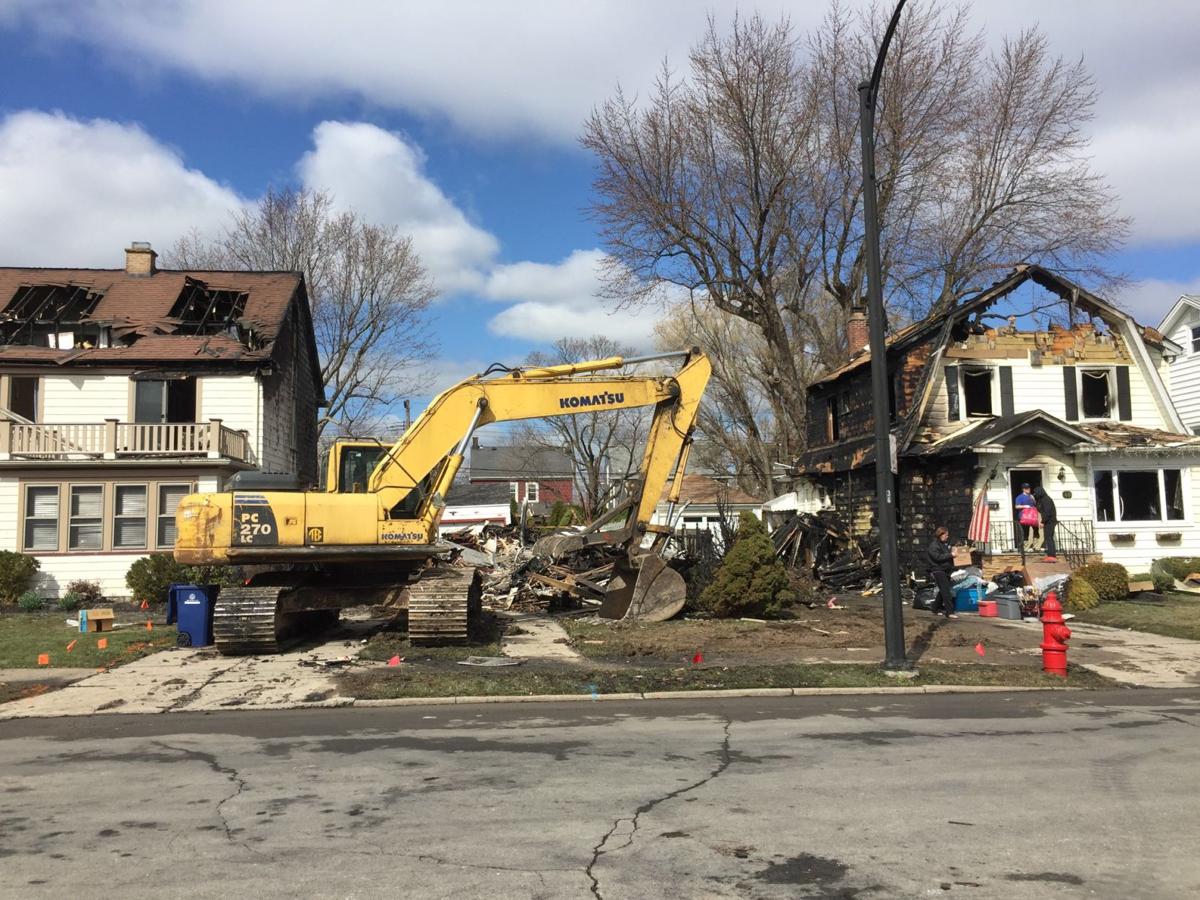 The scene on Covington Road in North Buffalo in April where Santo Cok allegedly caused an explosion that destroyed his house and severely damaged homes on either side. (Maki Becker/Buffalo News) 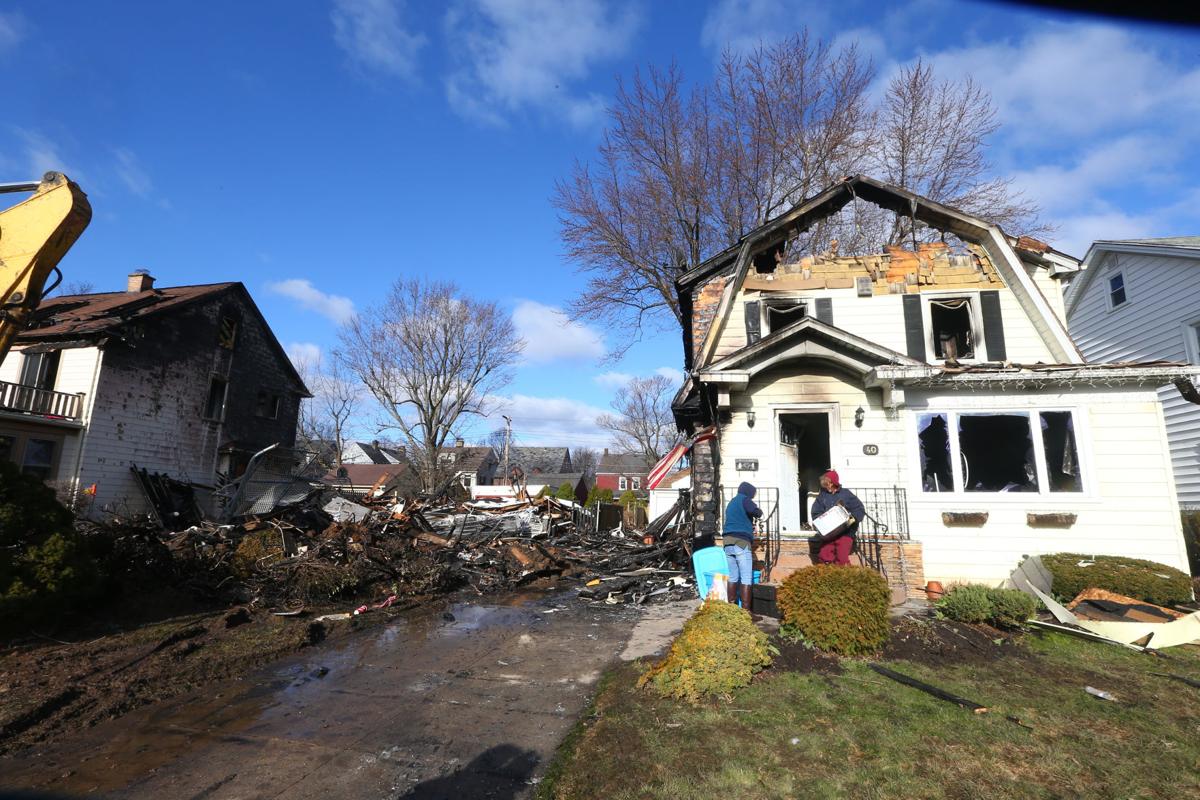 Cathleen Jones, left, helps her sister Mary Ilene Tarapacki bring out belongings from Tarapacki's home which is to be demolished after being damaged from the house next-door destroyed in an explosion Thursday evening. (John Hickey/Buffalo News) 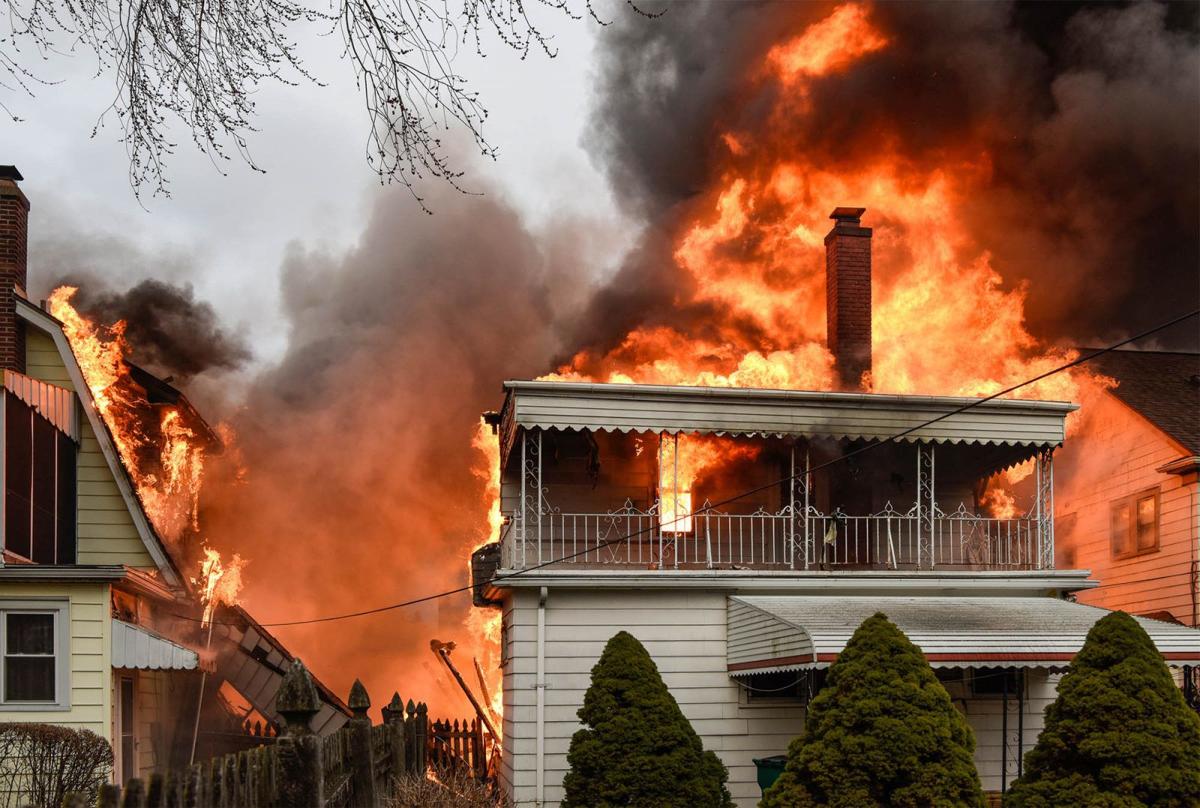 An explosion at 36 Covington Road in North Buffalo caused neighboring homes to go up in flames. (Joe Cascio/Special to The News)

Laurie Brown was watching the news in the living room of her home on Covington Place Thursday evening when she heard an explosion.

She opened her door and saw an inferno across the street.

“Debris was flying through the air. The smoke was billowing. The flames were shooting up,” Brown said.

The sides of the burning house had been ripped off and were leaning against the two neighboring houses. “And that was in flames,” Brown said. The front of the house appeared to be buckling in.

Then she saw something that took a moment for her to comprehend.

“I truly could not believe that I could see a man standing inside this burning structure,” Brown said Friday morning in a phone interview. “He was surrounded by fire. Surrounded by debris. Clearly stunned. But standing.”

She screamed for him to get out, trying to direct him toward the spot through an opening on the side of his house.

“He just walked straight toward me,” Brown said.

Investigators believe Cok was attempting to die by suicide. They believe he cut the gas line to his meter and the house fill with natural gas, said James Otwell, commander of the Buffalo Fire Investigation Unit. Then he went into the basement and lit a candle, Otwell said.

Buffalo Police Capt. Jeff Rinaldo explained how Cok was unhurt: "It went up, not down," Rinaldo.

Cok, who suffered first-degree burns on his face, was taken to Erie County Medical Center for a psychiatric examination. Cok has been charged with third-degree and fourth-degree arson, criminal mischief and reckless endangerment. The first arson charge is at the third-degree level because no one else was in the house, Otwell explained. The fourth-degree charge is for the damage to the neighboring houses. He was scheduled to be arraigned in the hospital.

Brown said when she saw Cok emerge from the burning house Thursday, she ran to him, put her arms under his and led him across the street to a neighbor’s house. She went back outside as firefighters arrived and told them that Cok had gotten out of the house safely and that there was no one else inside.

Cok’s house collapsed in the fire and the two neighboring homes were severely damaged. One was scheduled for an emergency demolition Friday afternoon.

Teresa and Robert Honan, who lived at 32 Convington for 35 years and raised their children there, weren't sure if their house can be repaired.

The Honans were inside their two-and-half-story home when they heard “this huge explosion,” Teresa Honan said in a phone interview Friday morning.

Robert Honan was on the finished top floor at the time. “That’s where the huge ball of fire was,” Teresa Honan said.

He ran downstairs, they called the fire department and ran outside.

The top floor of their home was severely damaged by fire. All the windows either were blown out or broken from the force of the explosion. “The rest of the house is soaked,” she said.

The most heartbreaking part is all of the family photos and mementos that were ruined by the water and smoke, she said. “All the things like that, that you can’t replace,” she said.

The couple had done a lot of work on the house.

“It was a beautiful house,” she said. “Over the years we did everything. Some things twice. Everything was perfect.”

The Honans spent the night with friends, and other neighbors, friends and fellow church members have reached out offering help. “We’re very grateful for all of the support. It’s only the beginning,” Teresa Honan said.

The house on the other side of Cok's also was damaged irreparably. The homeowners declined to comment Friday morning. On Friday morning, about eight people wearing boots and gloves carried pieces of furniture, DVDs and other personal items out of the burned wreckage of 40 Covington before it was to be torn down. The south side of the house was completely charred and all of the windows were broken. A relative started a YouCaring.com fundraising page to help them.

Laurie Brown said at the time of the fire, those residents were not home but neighbors knew that their two Great Pyrenees dogs were. A neighbor jumped a fence and kicked in the back door of the house as the roof started to burn.

“One dog came out right away,” Brown said. “The second dog was much harder to convince.”

A man ran into the house and coaxed the scared dog out. In the meantime, Brown’s husband and several other neighbors began kicking a hole through the fence, knowing there was no way they’d be able to lift two enormous dogs over it, Laurie Brown said.

“When the homeowner eventually came home her only concern was that her dogs were safe,” Brown said.

Several neighbors were familiar with Cok.

"He was kind of a recluse. He would never come out of his house," said James Kraws, a neighbor. "He lived on the second floor and never would come down," Kraws said.

Several neighbors said last year when new gas lines were being installed on their street, Cok refused to give permission to workers to be on his property. Investigators were looking into whether that dispute had anything to do with the explosion.

Brown and many other neighbors were stunned, but relieved, that no one was hurt in the explosion.

They commended the work of the firefighters and police for quickly getting the fires under control and limited the damage.

“It could have been so much worse,” Brown said.

A Buffalo man faces a felony marijuana charge and two others face weapons charges following an investigation of a Mineral Springs Road home.

A 24th Street woman faces an animal cruelty charge after witnesses told police she locked her dog in a cage and then threw the cage into a swimming pool.

Boy Scout bankruptcy may cost WNY councils, but no one knows how much

Three Western New York Scout councils will have to pay into a $425 million pot to settle sex abuse claims, under a proposed bankruptcy reorganization plan.

Taken into custody were Aweys Hussein, 20, of Louisville, Ky.; Jeylan Bakari, 22, of Kentucky; and a 16-year-old boy.

Wreckage left of home, center, that blew up in an explosion and burned homes on either side. on Covington Road. Police said the resident of the center home flooded the home with natural gas in an apparent suicide attempt. (John Hickey/Buffalo News)

The scene on Covington Road in North Buffalo in April where Santo Cok allegedly caused an explosion that destroyed his house and severely damaged homes on either side. (Maki Becker/Buffalo News)

Cathleen Jones, left, helps her sister Mary Ilene Tarapacki bring out belongings from Tarapacki's home which is to be demolished after being damaged from the house next-door destroyed in an explosion Thursday evening. (John Hickey/Buffalo News)

An explosion at 36 Covington Road in North Buffalo caused neighboring homes to go up in flames. (Joe Cascio/Special to The News)