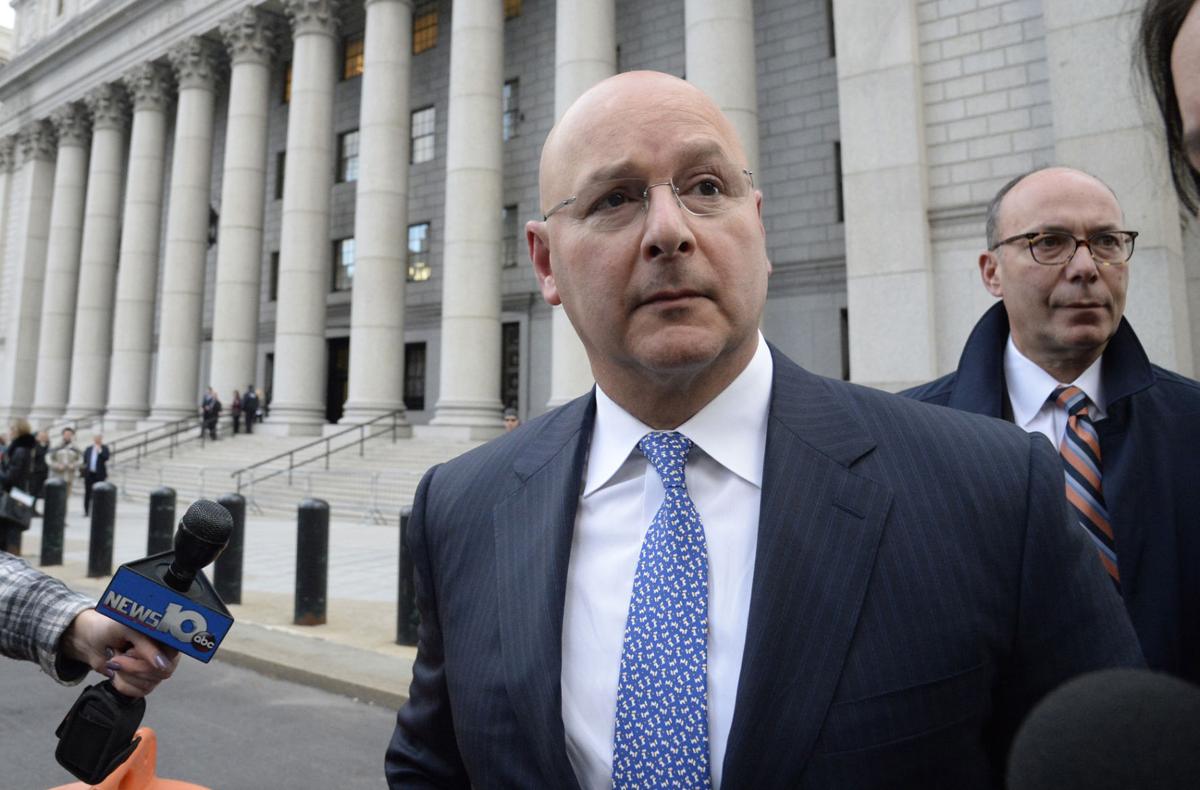 Louis P. Ciminelli, shown after being sentenced to prison, gave generously to local and state politicians over the years. Some of the recipients have made a point of giving the money to charities. Others don't intend to do so. (Jefferson Siegel/Special to The News) 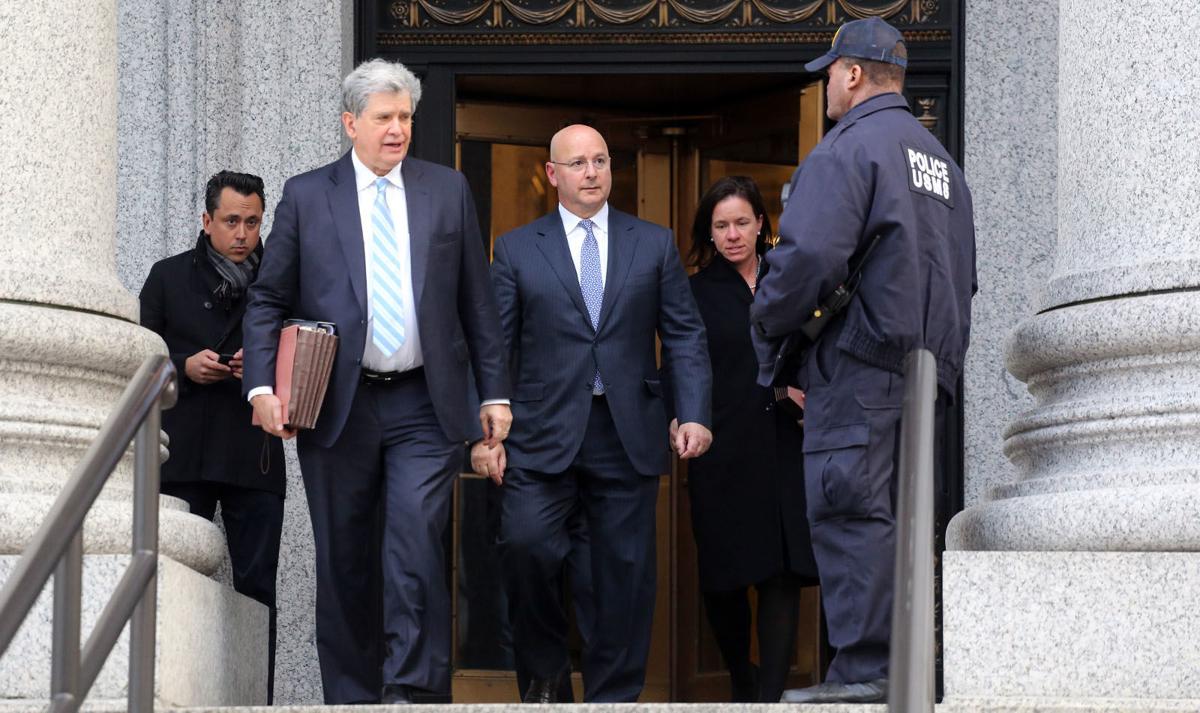 Louis Ciminelli leaves Manhattan Federal Court after being sentenced to 28 months in prison on fraud and conspiracy charges on Monday, December 3, 2018. (Jefferson Siegel for The Buffalo News) 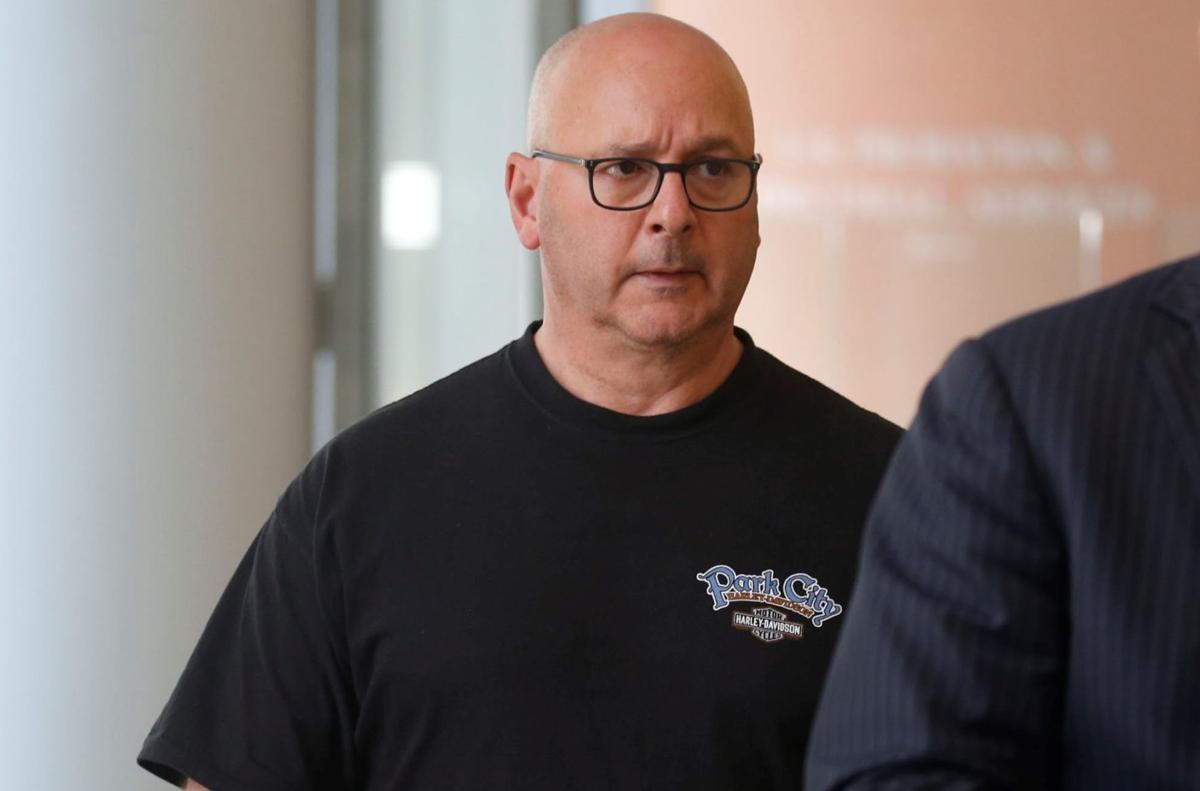 Louis P. Ciminelli, left, gets escorted out of court with his attorney Daniel C. Oliverio in 2016. (Robert Kirkham/News file photo)

NEW YORK – Hearing the judge who was about to sentence him describe how he defrauded the state and conspired to do it, Buffalo developer Louis P. Ciminelli cocked his head as if to say: No, that's not so.

"You can cock your head like that, Mr. Ciminelli, but you know what you did," U.S. District Court Judge Valerie E. Caproni said angrily. "You knew what you were doing when you deleted your Gmail account."

What he did, in the eyes of the jury and the judge, was try to destroy evidence that would eventually be found and contribute to his conviction on bid-rigging charges in July – a conviction that prompted the judge on Monday to sentence Ciminelli to 28 months in federal prison.

Ciminelli will also have to pay a $500,000 fine in the next 30 days, and that will likely be just the down payment on his financial punishment. The judge ordered Ciminelli's lawyers and prosecutors to work toward determining how much in ill-gotten gains that he should be forced to forfeit.

At the same time, Caproni cut Ciminelli a break that most federal convicts don't get: He won a suspended sentence and will remain free for upwards of a year pending his appeal of his conviction for his role in the Buffalo Billion corruption scandal.

It was, in the end, an unusual sentence handed down at the end of an unusually dramatic 75-minute sentencing hearing. Ciminelli spoke passionately in his own defense, while prosecutors made a by-the-book argument for a long prison term. But the final word went to a no-nonsense judge who said she had to hand down a tough sentence to show that public corruption will be punished.

"I hope this sentence will be heard around the state," Caproni said.

Caproni could have sentenced Ciminelli to far less time, or far more. Based on the bare minimum in the federal sentencing guidelines, his conviction could have earned him a sentence of only four to 10 months. But if Caproni had heeded prosecutors and taken an expansive view of how much the fraud Ciminelli and others perpetrated could have cost the state, she could have sentenced him to nine to 11 1/2 years.

The judge chose a middle path, combining a prison sentence of more than two years with stiff financial penalties.

She said she felt compelled to send Ciminelli to prison for a substantial period of time because the public deserves to see public corruption punished. And to prove why, she cited a letter to the judge from Buffalo developer Carl P. Paladino that alleged that Ciminelli engaged in deeply corrupt practices in an earlier project in which his company helped rebuild Buffalo Public Schools.

Caproni cited Paladino's letter as proof that people feel that public building projects are corrupt – and as proof that the public wants people who engage in public corruption to face severe punishment.

So Caproni handed down a tough sentence, while adding: "I don't believe Mr. Paladino."

"Mr. Ciminelli's actions have cost him his freedom," Loeffert said. "This is a teachable moment for the companies, lobbyists and public officials who think they can manipulate contract processes involving government investments."

Ciminelli's attorney, Paul Shechtman, offered little reaction after the verdict was announced, except to say he was glad Caproni suspended Ciminelli's sentence so that he would not have to report to prison immediately.

A jury convicted Ciminelli, along with former SUNY Polytechnic Institute head Alain Kaloyeros and two Syracuse-area businessmen, in July of fraud and conspiracy. Prosecutors said they conspired to steer state contracts to Ciminelli’s firm, as well as to a Syracuse company, rather than allow an open-bidding process for state-backed economic development projects.

The contract Ciminelli won allowed him to build the giant RiverBend facility that now houses a Tesla plant along the Buffalo River.

Caproni said Ciminelli was clearly less culpable than Kaloyeros and Joseph Percoco, the former state aide convicted in an earlier Buffalo Billion case. Evidence in their trials pointed to Kaloyeros and Percoco masterminding corrupt schemes, whereas Ciminelli and the Syracuse defendants merely went along with them.

Nevertheless, she said she saw Ciminelli's actions to win the RiverBend contract amounted to a serious crime. After all, the evidence at the trial showed he worked with Kaloyeros to tailor the bidding process on the RiverBend project to favor his company, LPCiminelli. And beyond that, Ciminelli's company took a 3.5 percent management fee when prosecutors said other developers typically charge only 2 percent.

What's more, Ciminelli showed "not an ounce of contrition" throughout the case, Caproni said.

Ciminelli certainly showed no contrition in a dramatic courtroom statement in which explained why he rejected a plea deal that prosecutors offered him.

"That alternative was to say I was guilty when I believed I was not," Ciminelli said.

Pleading for leniency, Ciminelli noted what the case has already cost him: his company and his role as a leader in the Buffalo community.

"I can no longer be a moving force in the renaissance of my beloved city," he said.

Ciminelli and his legal team also stressed his contributions to Buffalo financial institutions such as the Buffalo Philharmonic Orchestra and the Albright-Knox Art Gallery, as well as his diagnosis with a terminal form of bone marrow cancer that's expected to claim his life in eight years or less.

Those two factors led to a poignant moment where Ciminelli cited the many letters from Buffalo community leaders, former employees and friends who asked Caproni to go easy on him.

"Reading those letters is like reading one's eulogy," Ciminelli said.

But Ciminelli's contributions to Buffalo's civic institutions didn't seem to matter much to the prosecution team led by Assistant U.S. Attorney Matthew Podolsky.

"I don't believe the defendant should be able to buy his way out of prison retroactively," Podolsky said.

Prosecutors implied that Ciminelli's charitable contributions stemmed from his ill-gotten Buffalo Billion gains, but the judge chided them, saying it was clear that the developer donated plenty of time and money to Buffalo's civic life long before the RiverBend project started.

But Caproni clearly agreed with prosecutors' central argument, which Podolsky stated: "We think this was an enormous fraud."

Left to be decided is exactly how big that fraud was. Caproni could have sentenced Ciminelli to much more prison time if she could have determined that his gains amounted to the full $26.25 million contract the company got to build the RiverBend project.

Now, though, prosecutors and Ciminelli's defense team will offer their thoughts on how much Ciminelli's gains are, as Caproni works to determine how much money the Buffalo developer will have to forfeit.

In addition to the fine, the forfeiture and the 28 months of prison time, Ciminelli's sentence includes two years of supervised release once he completes his prison term.

If his sentence isn't overturned on appeal, Ciminelli will serve his sentence at the Federal Medical Center in Fort Devens, Mass., a medical facility operated by the Federal Bureau of Prisons.

Caproni said she took Ciminelli's health into account in the sentence, while acknowledging she's still mystified at his actions. After all, she said, Ciminelli's company could very have well won the Buffalo Billion contract on its credentials alone, without resorting to fraud and conspiracy.

"There's been no evidence that gives me any evidence as to why they did this," the judge said.

A jury convicted Ciminelli, along with Joseph Percoco, Alain Kaloyeros and the two Syracuse-area businessmen, of fraud and conspiracy in July 2018.

Louis P. Ciminelli, shown after being sentenced to prison, gave generously to local and state politicians over the years. Some of the recipients have made a point of giving the money to charities. Others don't intend to do so. (Jefferson Siegel/Special to The News)

Louis Ciminelli leaves Manhattan Federal Court after being sentenced to 28 months in prison on fraud and conspiracy charges on Monday, December 3, 2018. (Jefferson Siegel for The Buffalo News)

Louis P. Ciminelli, left, gets escorted out of court with his attorney Daniel C. Oliverio in 2016. (Robert Kirkham/News file photo)