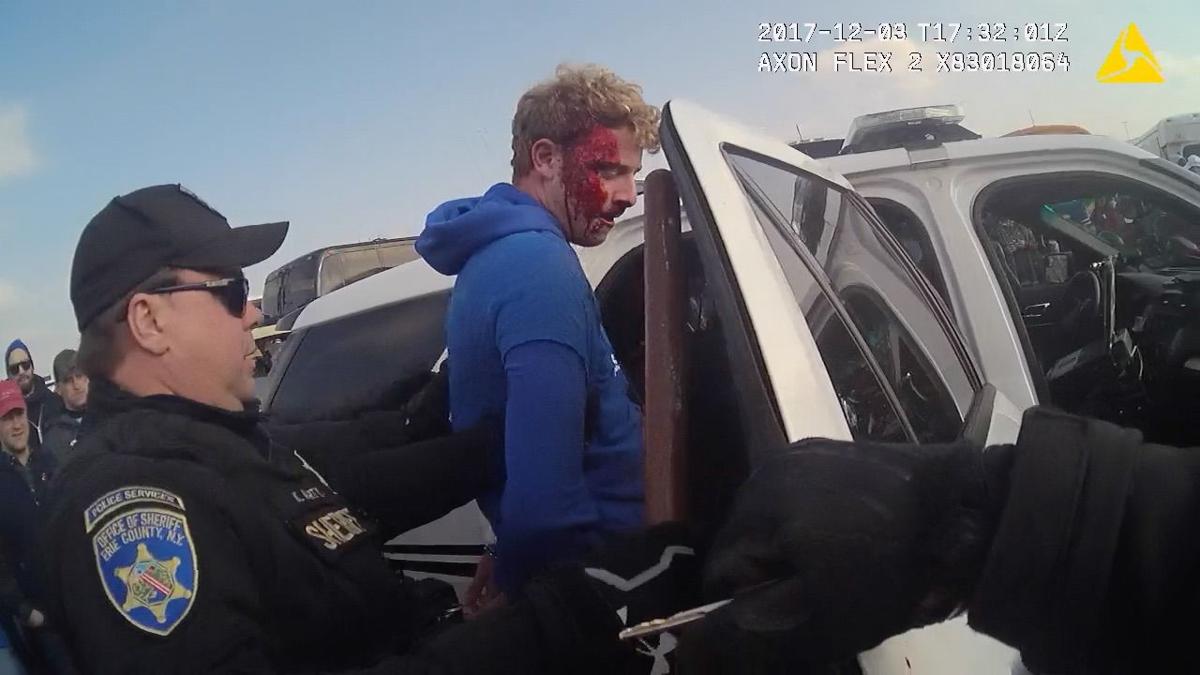 A still frame from footage by an Erie County Sheriff body camera shows Deputy Kenneth P. Achtyl, left, arresting Nicholas H. Belsito, right, for cursing at him during an incident outside New Era Field on Dec. 3, 2017. 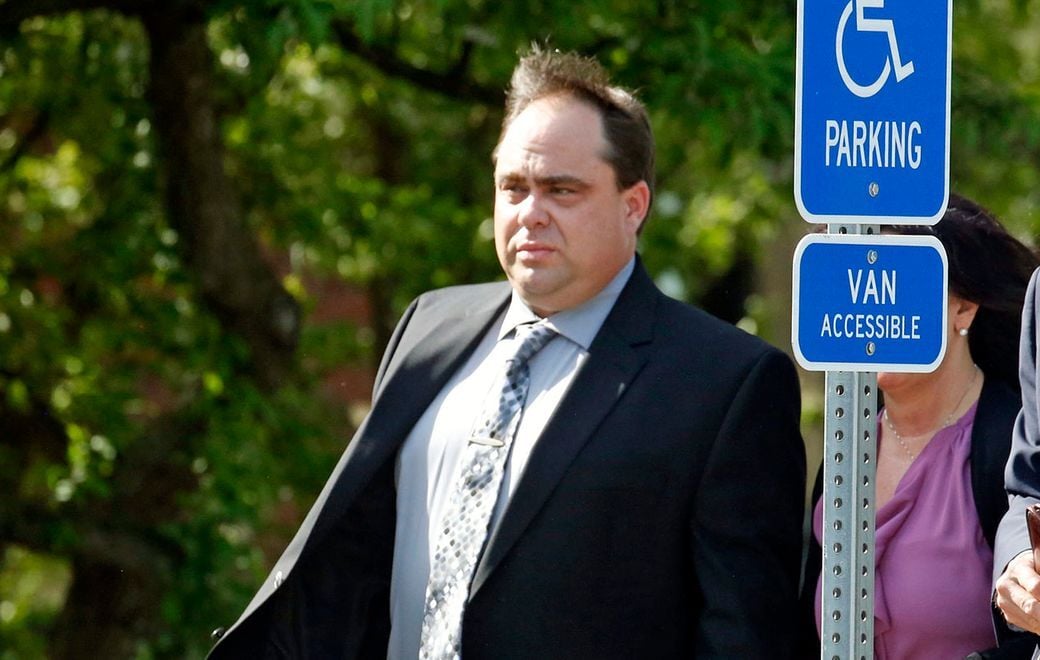 Kenneth P. Achtyl, an Erie County Sheriff's deputy, walks toward the Orchard Park Town Court, where he stood trial in 2019.

An Erie County sheriff’s deputy violated the civil rights of a Buffalo Bills fan arrested outside New Era Field in 2017, a judge ruled this week.

U.S. Magistrate Judge Michael J. Roemer’s order could allow a future jury to bypass questions of guilt or innocence – if the lawsuit goes to trial Þ and focus only on how much victim Nicholas Belsito should collect from county government.

The judge's 19-page ruling says now-former Deputy Kenneth P. Achtyl violated Belsito’s Fourth Amendment rights protecting him from unlawful arrest and seizure. Further, Roemer ruled Achtyl is liable for battery for the blows he inflicted with his baton, which left Belsito with a concussion and a broken nose.

Roemer agreed with most of the lawsuit’s allegations against Achtyl that fit within the charges proven in his criminal trial in September 2019: reckless assault, official misconduct and falsifying business records. Under the doctrine of collateral estoppel, parties in a civil case are stopped from relitigating issues already decided by a criminal court, which assesses guilt beyond a reasonable doubt, the highest legal standard.

“Achtyl was found guilty after trial by jury, and he has not disputed that his guilt has been adjudicated or that he had a full and fair opportunity to litigate the issues in New York courts,” the judge wrote.

A lawyer for the county wanted the judge to delay his ruling until the former deputy could appeal his conviction, but the judge said he sees no sign an appeal has been filed, almost two years after the guilty verdicts.

Achtyl’s arrest of the University at Buffalo student for swearing at him was captured on video outside the stadium on Dec. 3, 2017, and mushroomed into one of the most visible entanglements of Sheriff Timothy B. Howard’s years in office. Howard sat in on the trial, criticized the district attorney for allowing the video to go public, lamented the verdicts against his deputy and asked the judge to go easy when sentencing Achtyl, who had already resigned.

Two of the four candidates running to succeed Howard as sheriff now that he has decided not to run again – Kimberly Beaty and Ted DiNoto – said they would not have attended the trial, in uniform, as the sheriff chose to do. Candidate John C. Garcia said he likely would not have because he ”would not want to come off as influencing the witnesses or the jury.”

While Howard insisted he had not rooted for Achtyl, the former deputy testified during a deposition that Howard had expressed his support when he met him in the courtroom on the trial’s opening day, and the two later texted about the prospects for an appeal. In his deposition, Howard eventually admitted the two had texted during the trial even though the sheriff had said he was only present to learn the facts.

In a setback for Belsito’s team, the judge did not agree that Achtyl is liable for “malicious prosecution,” because there is no proof so far that the deputy “initiated or maintained charges against Belsito out of malice.” A jury would have to decide that allegation, Roemer wrote.

But Aaron F. Glazer, Belsito’s lawyer, said he might go to trial only on the allegations that the judge ruled have been proven, and a jury would be asked only to decide damages.

In practice, however, it is unusual for a lawsuit against Erie County to go to trial. The vast majority of civil cases are settled with sums negotiated out of court and paid solely by taxpayers because county government, for the most part, is self-insured.

For Belsito's case, however, there is an insurance policy. The Buffalo Bills required a policy to cover the actions of the sheriff’s detail at games through the Stadium Security Agreement. The insurer has provided the attorney defending the county in the matter, said County Attorney Michael Siragusa, who declined to comment further about the Belsito lawsuit.

Achtyl sentenced to community service for assault of Bills fan

A still frame from footage by an Erie County Sheriff body camera shows Deputy Kenneth P. Achtyl, left, arresting Nicholas H. Belsito, right, for cursing at him during an incident outside New Era Field on Dec. 3, 2017.

Kenneth P. Achtyl, an Erie County Sheriff's deputy, walks toward the Orchard Park Town Court, where he stood trial in 2019.