Subscribe for $1
Read Today's E-Edition
Share This
Jail put on hold for former judge in bribery scheme; Pigeon gets a year in custody
0 Comments
Share this
Support this work for $1 a month
Aaron Besecker

But Michalek won't be headed to jail right away, if at all.

Not long after Cerio imposed about 16 months of jail time – and after court officers led a handcuffed Michalek out of the courtroom – Michalek walked out of a downtown Buffalo courthouse with his attorney.

In an unusual turn of events, Cerio put a hold on Michalek's jail sentence, meaning it's at least delayed, though it's also possible the former judge may never serve any time in custody.

This capped a day that also included more jail time for former political power broker G. Steven Pigeon, who was sentenced earlier in the afternoon to a year in jail for his role in the bribery scheme with Michalek.

The two long-delayed sentencings followed guilty pleas by Michalek in 2016 and Pigeon in 2018. Michalek resigned from the bench when he pleaded guilty.

Here's how the Michalek's sentencing played out Thursday:

At 2:49 p.m., after a statement by his attorney, Michalek began to read a statement in court before learning his sentence for bribery and filing a false instrument, both felonies.

The judge said Michalek "violated the trust of the public" and his oath as a judge.

"This black robe means something, not just to those who show up in court here as lawyers, but to the litigants, to the witnesses to the general public," Cerio said. "And if we don't demonstrate the level of respect for the law, we cannot expect anybody else to."

At 3:15 p.m., Cerio sentenced Michalek to 364 days in jail for the third-degree bribery conviction, to be followed by four months for the false instrument conviction.

Court officers handcuffed Michalek behind his back and led him out of the courtroom. The judge left the bench.

Carrie H. Cohen, Michalek's attorney, asked if the judge could return to the bench in order to consider an application.

Cohen and the prosecutor, Assistant Attorney General Michael Smith, went back into the judge's chambers. They emerged several minutes later, but then were summoned back into chambers at 3:32 p.m.

Two minutes later the judge came back into the courtroom and said that after meeting with the attorneys, he was going to "reschedule the matter" for Sept. 9.

In the meantime, Cohen was told she could submit a motion or application "with respect to any alternative to incarceration," Cerio said.

He said he would allow Michalek to remain free on bail that had been in place since his guilty plea.

The judge said Michalek had not brought with him his medications and referenced the former judge's "state of health." He also noted Michalek has previously appeared in court as required.

Cerio took Michalek's passport and said he was "going to release him at this time under the same conditions as previously imposed."

At 3:50 p.m., Michalek and his attorney left the courthouse.

The scheme between Michalek and Pigeon happened from February 2012 to April 2015, according to prosecutors.

In the years-long back-and-forth, Michalek had asked Pigeon to help with a possible appointment to the Appellate Division of State Supreme Court and employment for two relatives. Michalek gave Pigeon information, including some nonpublic information, about lawsuits to which Pigeon had connections.

Michalek also got an attorney Pigeon knew appointed as a receiver in a foreclosure case, even though the lawyer wasn't on the court's list of qualified receivers. Michalek also got Buffalo Sabres tickets and a $1,000 political fundraiser ticket for free for a relative.

In his statement to the court, the 71-year-old Michalek said he was "ashamed and horrified" by his own conduct. He said what he did, he did for his family.

One of his sons wanted to enter the military, and Michalek and his wife were concerned about their son's safety and tried to find him a different job opportunity.

"I was so blinded by my desperation to keep my son safe," Michalek said.

The former judge said his reputation was destroyed by his "own doing," and he told the judge he knows he was solely responsible for his actions.

The toll on his family was severe, and included a son who took his own life on Father's Day about a year after Michalek pleaded guilty, his attorney said.

His attorney, in asking for a sentence that did not include incarceration, also told the judge Michalek helps care for his elderly mother-in-law.

Responding to Michalek's statement, the judge said he didn't see how some of his actions, like accepting the hockey tickets or the fundraiser ticket, helped his family.

Cerio said he didn't think Michalek would "fare well in state prison." He also said this was not a case "where probation is a consideration for me."

Michalek faced up to seven years in prison for bribery and up to four years for the false instrument.

Cerio's sentence for Pigeon, the former Erie County Democratic Party chairman and one-time influential political operative, was ordered to be served concurrently with the four-month federal sentence issued Wednesday in a separate case.

"The ultimate penalty, the thing that punishes Pigeon more than anything else, may be the reality of never again practicing his lifelong passion for the politics game," Bob McCarthy writes.

Cerio admonished Pigeon for his actions.

"What you undertook here was selfish. To be frank with you, Mr. Michalek got played. He believed you were doing one thing when in fact you weren’t doing any of that," the judge said.

Pigeon, shackled and wearing a blue jumpsuit, told the judge he was embarrassed and accepted responsibility for his mistakes.

"I just wanted to say that I fully accept responsibility for what I did and greatly, greatly regret the light it sheds on the judicial system," Pigeon said in court.

This was the second straight day Pigeon appeared in a courtroom to learn his fate.

Pigeon, who turns 62 next month, was sentenced Wednesday in federal court to four months in prison for making an illegal political donation to Andrew Cuomo's 2014 gubernatorial re-election campaign. Pigeon was taken into federal custody after Wednesday's sentencing.

Pigeon also faces criminal prosecution on rape charges. Prosecutors allege Pigeon raped a girl under the age of 11 sometime between Thanksgiving and Christmas 2016, an allegation he has denied.

I'm a member of The Buffalo News' breaking news/public safety team. I've been reporter at the News since 2007.

The Editorial Board: The public deserves transparency on why Michalek’s sentence was put on hold

If there are good reasons why this sentence can’t be carried out, given the amount of time it took to even arrive at a sentence, let’s hear them.

One point of contention between the sides is whether former state Supreme Court Justice John Michalek's sentence had "commenced" when he was led out of the courtroom by an officer.

Former state Supreme Court Justice John Michalek was handcuffed and led out of a courtroom Tuesday, to begin serving a 16-month prison sentence for bribery and other charges.

Once a kingmaker of Western New York politicians, with ties to the Clintons, former Gov. Andrew Cuomo and billionaire Tom Golisano, G. Steven Pigeon appeared before a federal judge Wednesday who sentenced him to four months in prison followed by one year of supervised release for making an illegal political donation. 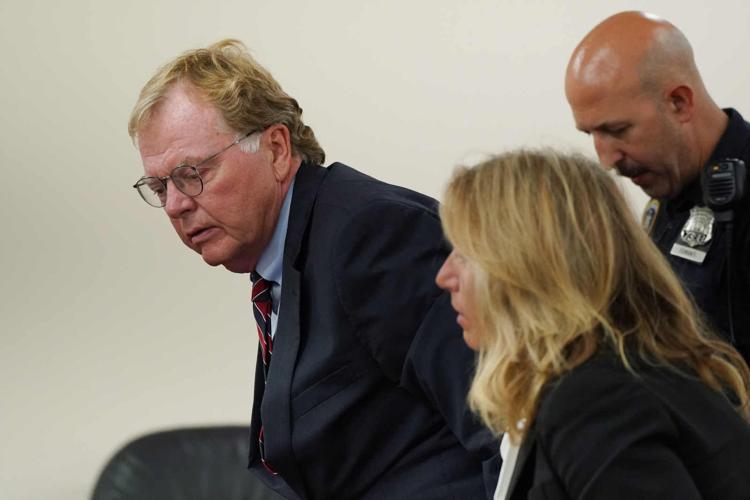 Former judge John Michalek is placed in handcuffs by a court officer. The judge later put a hold on his sentence. 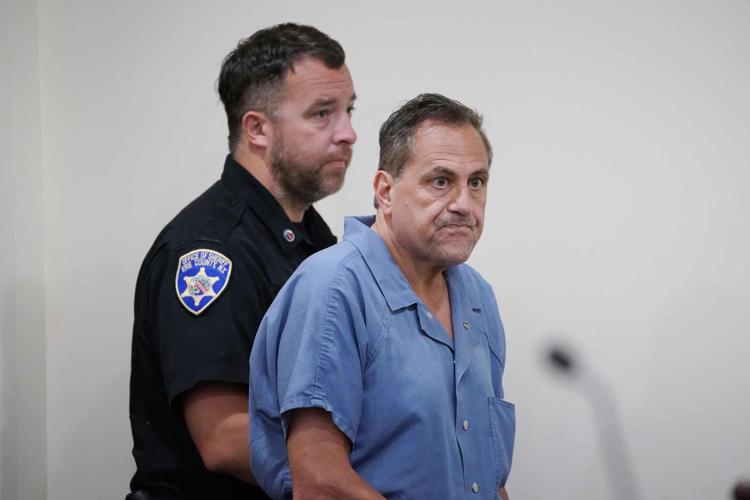 Former political operative Steve Pigeon is led into court before being sentenced to one year in prison at the Erie County Courthouse, Thursday, July 28, 2022. 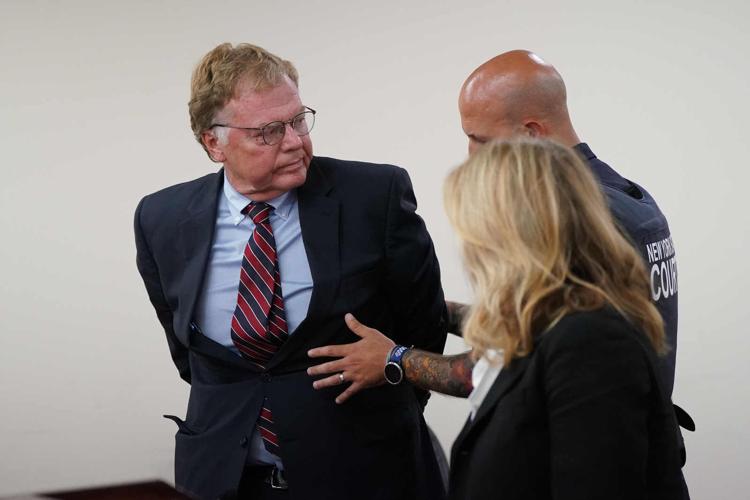