'I'm good. The city is not good': Man pushed by police speaks at protest
0 comments
Share this
Support this work for $1 a month
Matthew Spina ,  Maki Becker

Martin Gugino, the 75-year-old protester who suffered a cracked skull after he was pushed to the ground by Buffalo police in June, spoke to reporters Wednesday while attending a protest against police misconduct.

Gugino, wearing a "The Indigenous Strike Back" sweatshirt, described his current condition.

"I have residual things. Probably this will never come back all," he said, pointing to the side of his head. "I've got a cane."

Martin Gugino, pushed to the ground by Buffalo police in a video seen worldwide, speaks out against brutality during a news conference urging prosecution of bad cops. pic.twitter.com/4MaA17qwXY

He said what needs work is the City of Buffalo.

Two Buffalo police officers were charged with felony counts of assault and were suspended without pay for a month after the June incident that was captured on video by a WBFO reporter and viewed millions of times worldwide.

"The problem with that is any of the officers would have done the same thing," he said. "These were not two especially bad officers. It's the whole system is wrong. They're all taught to do the wrong thing. So that's the problem that has to be fixed."

He also criticized the curfew that was in place when he went to Buffalo City Hall on June 4 and the Buffalo Police Emergency Response Team marched across the front of the building to clear it. That's when Gugino is seen in the video approaching them and then being pushed to the ground. He fell back hitting his head. Blood was seen coming out of his ears moments later.

"The curfew was wrong," Gugino said Wednesday. "Mayor Brown has to be taught what the First Amendment means."

"The chief of police – whatever training he gave these guys – it's not right," he said.

"You're allowed to protest on the sidewalk. Protest is the American way. That's the feedback that the government needs."

Gugino offered some details about the night he was injured.

Gugino said that he went to City Hall that night because he wanted to say a rosary with the police officers. A day earlier, several police officers had kneeled with protesters in Niagara Square.

"I got there late because the day before the people took a knee which was fine and I thought, well, I'll go and maybe we can say a rosary. Why not? Let's do that," Gugino told reporters.

"But they weren't into that," Gugino said.

It wasn't until a couple of days after he was injured that he saw the video of what happened – and learned how much attention it had received.

He said his niece told him he was on George Stephanopoulos' show.

"Forty police and 40 protesters, each one could take a guy," he said of the police response that day.

He said he agreed with Gov. Andrew Cuomo's assessment of what happened, that it was "just not reasonable."

On Wednesday, Gugino was participating in a protest over the arrest of a Buffalo man, Morgan Eaton, who was charged with possession of cocaine, even though field tests showed the substance police found was not cocaine.

"This case is not related to a protest. It's policemen not following the rules. If you can't get the policemen to follow the law ... that's not good," he said.

Letter: Correcting societal wrongs starts with those at the top

Julia Ioffe reported in GQ on Oct. 20 that “a military official inquired about deploying (directed energy weapons) against protesters” in Wash…

A pandemic, protests and pall of death: Top local stories of 2020

Here's a look back at the Top 10 stories of the year, as determined by reporters and editors at The Buffalo News.

A new visual perspective – the police officers' point of view – of the scene in front of City Hall that garnered international attention and criticism was revealed Monday when the Buffalo Police Department released body-worn camera footage from the June 4 incident to The Buffalo News.

Trial in Martin Gugino lawsuit not likely until 2024

The protester's federal civil rights lawsuit against the City of Buffalo and members of the Buffalo Police Department won't get to trial "any time before 2024 at the earliest," a judge said.

One year later, Martin Gugino looks back and hopes he made a difference

Martin Gugino had no idea that he would become the unwitting star of a viral video that rocketed around the world drawing millions of views and more attention to the question of what policing is supposed to be.

The two Buffalo police officers who shoved and injured a 75-year-old peaceful protester at a demonstration last month in front of City Hall in an incident that garnered international attention remain suspended from their jobs, but are now being paid.

The 75-year-old protester pushed by Buffalo police in front of City Hall last week, triggering international criticism, suffered a fractured skull, his attorney said Friday. Martin Gugino is not yet able to walk and became tired Friday after a “short conversation,” attorney Kelly V. Zarcone said in an emailed statement. “He is appreciative of all the concern about him,

Protester is not 'Antifa,' friends say, but he believes in civil disobedience

Martin Gugino, the 75-year-old protester pushed to the ground by Buffalo police in a video seen millions of times on Twitter, is passionate about fighting injustice, wherever it may be found, his friends say. He supports nuclear disarmament. He is against torture in Guantanamo. He has protested to help save the environment and support refugees. He has written letters

Who is injured protester Martin Gugino? Here's what we know.

The incident has drawn international attention, most recently today, when President Trump tweeted an unproven conspiracy theory related to Gugino’s

Both officers pleaded not guilty to the charges as part of a procedure that took place online before City Judge Craig D. 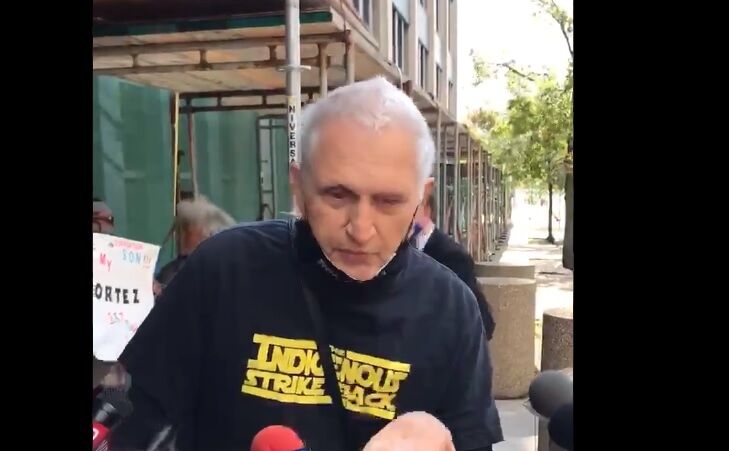 Martin Gugino speaks to reporters at the protest Oct. 7, 2020. 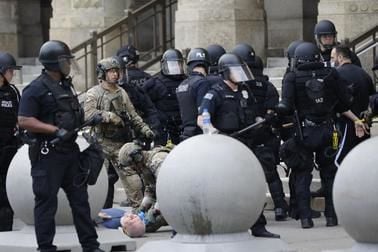 Police tend to Martin Gugino, 75, who was shoved to the ground as police cleared the area in front of City Hall of protesters on June 4.