"I remember I was running and I fell to the ground," she said. "I was just sitting there for a minute and still trying to move."

She cried out. "Help me! Help me! Somebody help me!"

She wasn't in pain but she felt tired. Strangely tired. All she wanted to do was lie down right there in the parking lot and go to sleep.

A young woman ran to her aid and put her hands on the bullet wound to put pressure on it.

Livingston started to panic. She couldn't feel her legs.

She asked the woman: "Take my shoes off."

She asked her again: "Take my shoes off."

"I did take your shoes off," she replied.

A crowd gathered. Someone said: "Keep your eyes open, please. Stay awake." A boy she knew from the neighborhood looked down at her and cried. An ambulance rolled up and an EMT cut her shirt open.

Livingston lived, but the bullet that struck her on May 3, 2020, changed everything. It entered the left side of her torso, severed her spinal cord and damaged her kidneys, before exiting her body through the other side leaving her paralyzed from the waist down. She was just 19. Until then, she had never set foot in a hospital.

"I was the perfect healthy girl," she said.

Livingston was one of 355 people who were shot in Buffalo in 2020, nearly double the toll in 2019. The rise in shootings in Buffalo mirrored an explosion of gun violence in many of the nation's cities last year as the Covid-19 pandemic and social distancing measures aimed at containing it upended normal life.

A hospital-based program in Oakland, Calif., where intervention specialists meet with victims of gun crimes to provide trauma-informed care at their bedsides, has gained national attention. Earlier this year in Buffalo, Erie County Medical Center launched BRAVE – Buffalo Rising Against Violence at ECMC – which works with the state's SNUG street outreach program to help young victims of gun violence.

Hospital advocates provide culturally appropriate mental health services and other trauma-informed services to help gunshot victims as they are physically healing from their injuries.

The program – and Kovanic Spiro – had that effect on Livingston.

Her first couple of weeks were a blur. She woke up a few times not understanding what had happened. She was devastated when she learned the extent of her injuries.

"What do you mean, I'm never going to walk again?" she remembered thinking.

She couldn't imagine it.

"Before the situation, I was just a regular teenage girl. I partied. I hung out with my friends," Livingston said. She was getting a couple of businesses started – doing acrylic nails and making chocolate-covered strawberries.

Recuperating in the hospital, she couldn't even sit up in her bed on her own. She was depressed and filled with rage.

She thought about getting revenge. She wanted to give up.

"I would never wish this on my worst enemy," she said. "This situation was so hard for me. Just imagine going through this as you go from being 19."

Her recovery was that much more difficult because of the extra safety protocols in place due to Covid-19 which was in the throes of its first peak in Western New York. Visitors to hospitals were basically forbidden, even for patients like Livingston who weren't being treated for the coronavirus.

"She was terrified," Kovanic Spiro said. "She didn't know anyone there."

Meanwhile, her parents were worried sick about her. Unable to be with her at her bedside, they would try to talk to her through FaceTime but Livingston wasn't always up to it. Kovanic Spiro tried to keep them informed about what was going on, including updates on the many surgeries she underwent.

Livingston recalled seeing Kovanic Spiro around and wondering who she was. She would hear her voice around her all the time and heard her speaking up for her. "She went hard for me," Livingston said.

Back when she still couldn't eat because of the tracheal tube in her throat, she was allowed to dip a sponge-tipped swab into water to "drink." She hated it.

Do you want Gatorade? Kovanic Spiro asked her. Livingston wasn't sure if the doctors would allow it.

"She came back with three huge Gatorades," Livingston said.

"I didn't know what flavor you liked," Kovanic Spiro said.

Kovanic Spiro, acting as an advocate for Livingston and a liaison to her family, visited every day. She talked her into meeting with a psychologist and helped arrange a few short and safe visits with her mother. In July, on Livingston's 20th birthday, Kovanic Spiro and the nurses who had been tending to Livingston threw her a surprise, socially distant party in an outdoor discharge area where her friends could see her. Livingston was still on a ventilator so that had be brought down with her and managed at all times by a nurse.

The therapy sessions started to help, Livingston said. "It was really helpful making me become more happy again," she said. She also drew a lot of inspiration with other young people who were living with paralysis.

Livingston recalled meeting a young woman about her age through Facebook. "She was in a wheelchair and she was looking pretty. She had on her Jordans. She had her hair done and had on her jewelry," she said. She thought: "I can't wait to do that in my wheelchair."

Livingston spent three months in the hospital, going from the intensive care unit to a floor for patients with ventilators and eventually to a rehabilitation floor, before being released. She is regaining her independence. She uses a hot pink wheelchair and just recently learned how to drive using hand gears attached to the pedals.

She continues to go to ECMC for follow-up visits with the BRAVE staff and is thinking about perhaps becoming a violence interrupter or social worker herself.

She has stopped worrying about who shot her. "Hopefully, karma gets them," she said.

"I spent so much time being angry and thinking, 'Who did this?' " she said.

Now 21, she said she focuses on moving forward.

"I had to learn forgiving is a part of healing. You know what I'm saying? Nobody did it to me but the devil. I believe in God and I had to thank God that he even gave me another chance."

The two men arrested in Saturday's incident were identified as Raefield Jones, 33, and Olyen Brown, 37, both of Buffalo.

West Seneca teen shot in the legs on Broadway

He was taken by ambulance to Erie County Medical Center, where he was listed in stable condition Sunday, according to Buffalo police.

Shootings skyrocket in Buffalo so far in 2021

The number of people shot in Buffalo over the first two months of the year has jumped 140% compared to the same period last year, according to Buffalo Police Department data.

A Buffalo News analysis of the latest Buffalo Police Department data shows that the number of shootings in August dropped down to close to what's considered "normal" for the month.

Buffalo remains in the throes of swelling gun violence, with shootings up 61%

Buffalo's 49 homicides over the first seven months of the year already eclipse the city's annual total in six of the last 10 years. 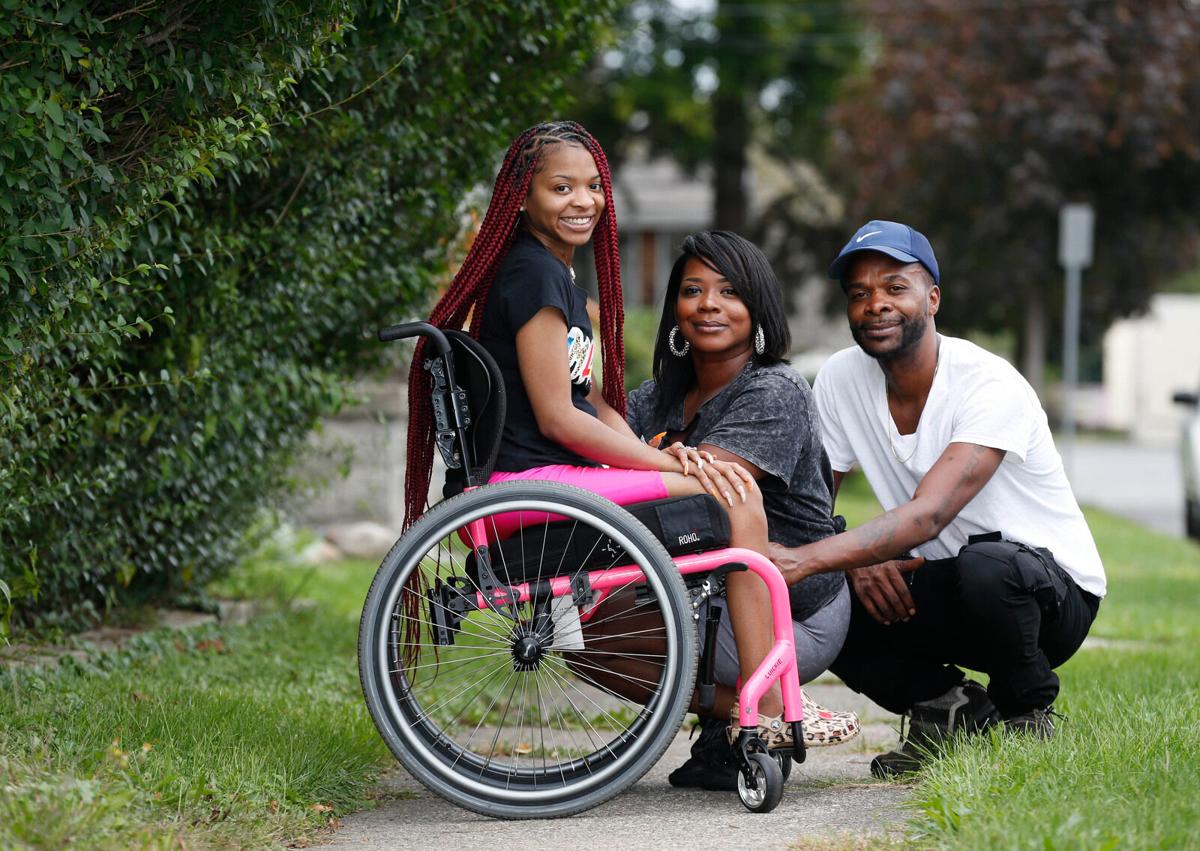 Quintasia Livingston, 21, was shot in May of 2020 just as gun violence began skyrocketing in Buffalo and in cities across the country. She survived, but is now paralyzed from the waist down. She was treated at ECMC where she not only received medical care, but also emotional support from a new program aimed at gun violence victims. She's seen here with her parents Rayshelle Jackson and Quintin Livingston. 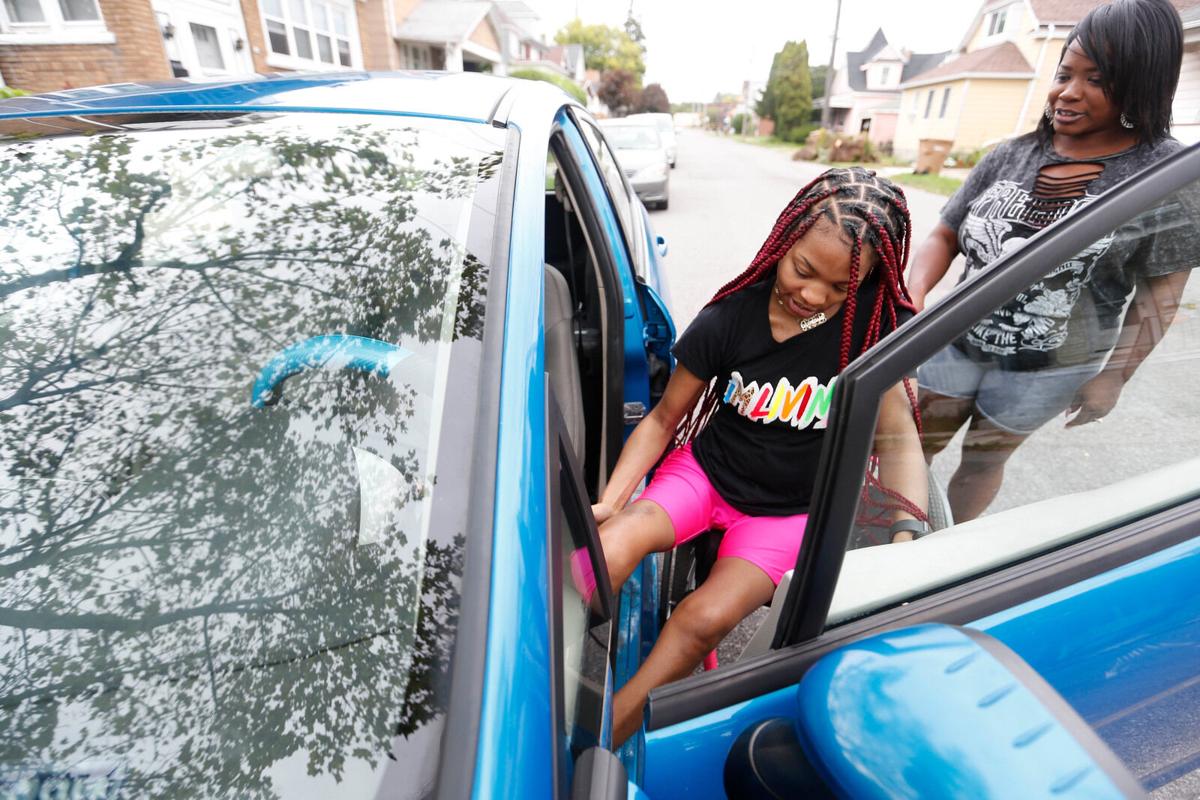 Quintasia Livingston gets into her car to drive as her mother Rayshelle Jackson looks on. 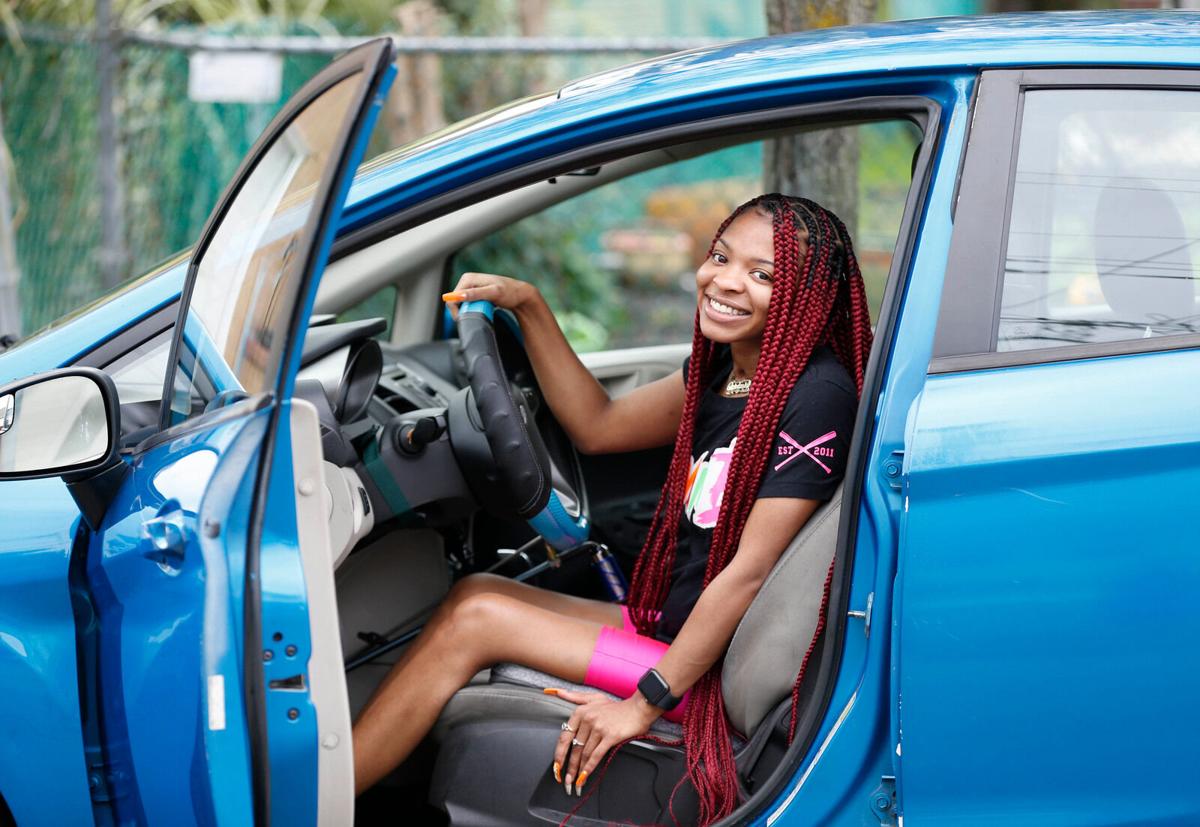 Quintasia Livingston, 21, was shot in May of 2020. She survived, but is now paralyzed from the waist down. She was treated at ECMC where she not only received medical care, but also emotional support from a new program aimed at gun violence victims. Livingston began driving in August and it has given her a new sense of freedom and normalcy.