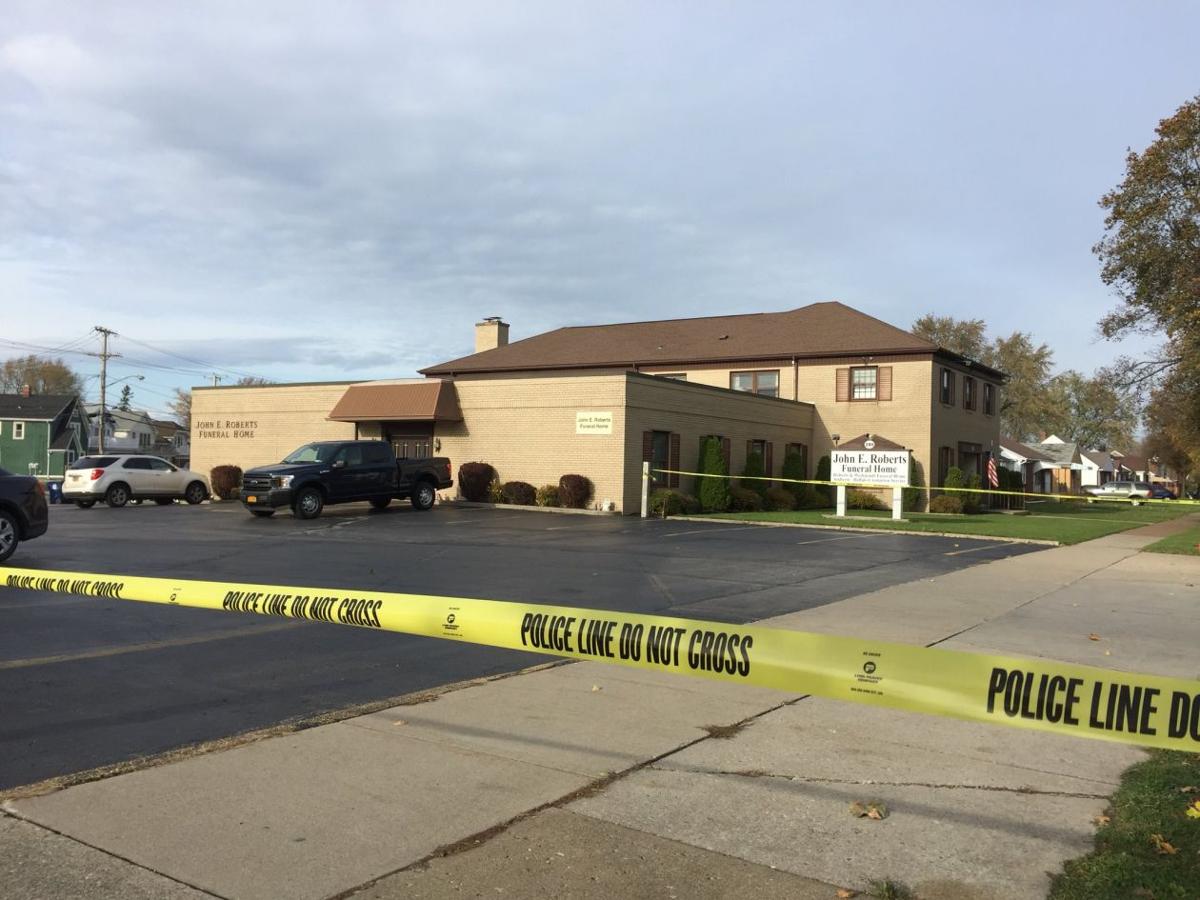 Yellow crime scene tape could be seen on Nov. 4 outside the John E. Roberts Funeral Home on Grover Cleveland Highway. Charles Durante, a funeral home director there, was found in the middle of the road and later died in what police now say was a suicide. (Aaron Besecker/Buffalo News) 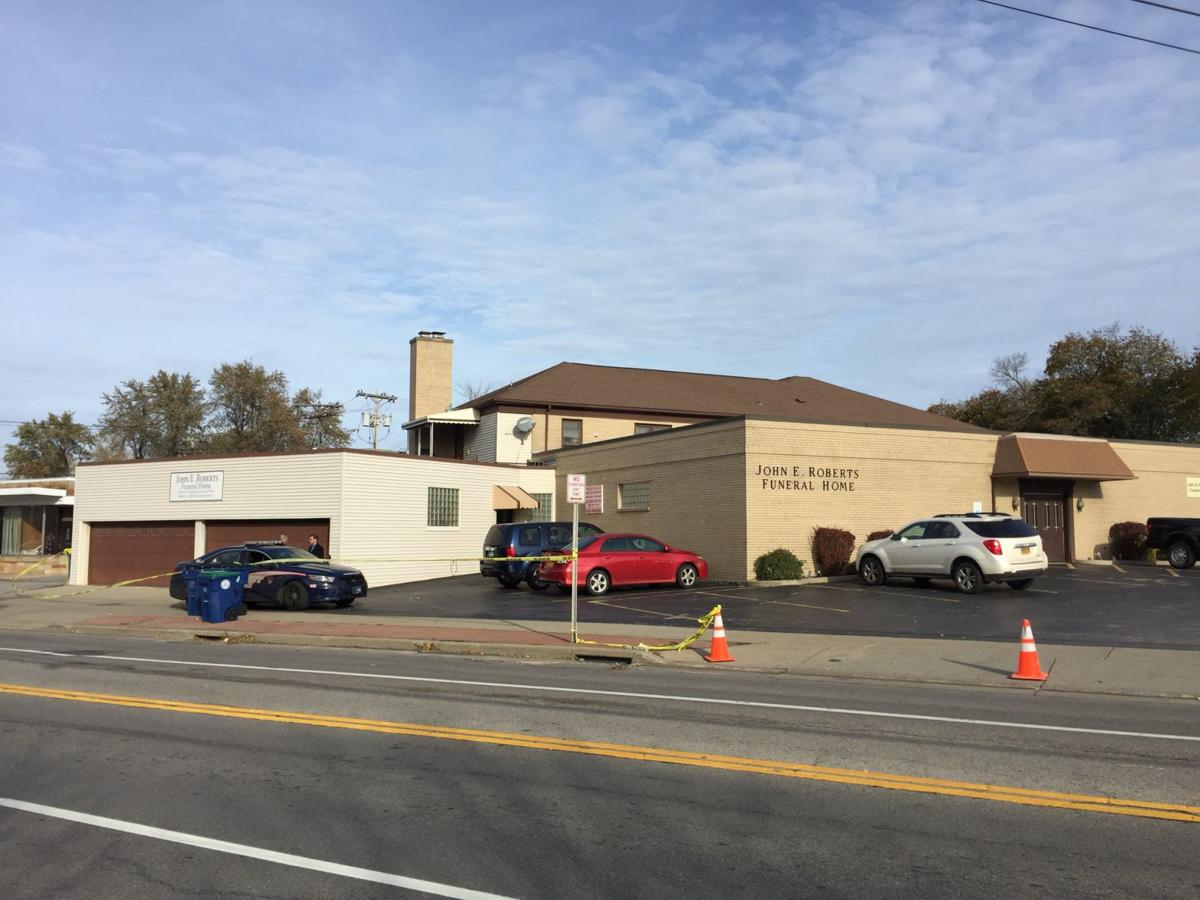 Yellow police tape remained up around the parking lot of the John E. Roberts Funeral Home on Grover Cleveland Highway Monday, hours after a funeral home director, Charles Durante, was found in the middle of the road and later died at ECMC. (Aaron Besecker/Buffalo News)

The call came in early Monday morning as a "person down" in the middle of North Bailey Avenue, near Grover Cleveland Highway, in Amherst.

By Monday afternoon, the incident became what police called a "suspicious death" of a longtime director of a nearby funeral home that became the scene of a possibly related hazardous materials investigation.

Amherst police identified the man found in the street as Charles Durante, 43. He was a funeral director at the John E. Roberts Funeral Home at 280 Grover Cleveland. He was taken to Erie County Medical Center where he died several hours later.

While police were investigating how Durante ended up in the street, they came upon a possible hazmat situation involving embalming fluid at the funeral home, bringing firefighters and hazmat crews in special protective gear to the scene.

"We can’t definitely say why this person has died and what caused his injuries," Amherst Police Capt. Chris Meyer told reporters at an afternoon news conference.

Police found Durante just after 6 a.m. in the middle of North Bailey. He was taken by ambulance to ECMC but his condition deteriorated and he was pronounced dead at 1:08 p.m., police said.

The possible hazmat situation at the funeral home involved a chemical called "dricav," which is a cavity embalming fluid.

Durante had worked for the funeral home for about 10 years and lived in an apartment above the home at 280 Grover Cleveland, said James J. Roberts, the president of John E. Roberts Funeral Home.

"He was a great guy," Roberts said.

Durante is survived by two sisters and a father. His mother died a few years ago, Roberts said.

“We are heartbroken by this tragic loss. Charlie was a special person to us and the community," funeral home officials said in a statement. "We’re thankful for the Amherst Police Department's prompt response and are cooperating fully with their investigation.”

A witness saw Durante fall in the road, according to police.

"Someone saw him and watched him fall in the roadway," Meyer said, declining to say where he was seen coming from. Durante was found on Bailey about 100 yards north of Grover Cleveland Highway.

Police could not say what kind of injuries he may have suffered but confirmed that he was neither struck by a car nor was he shot. They also weren't explicitly tying the injured man to the hazmat situation.

Monday afternoon, yellow police tape could still be seen around the parking lot of the funeral home. Roberts said police asked him questions about what kind of access people had to various parts of the building. One of the neighboring businesses said police were reviewing footage from its surveillance cameras.

Police ask anyone who may have seen what happened or who has any information to call the detective bureau at 689-1322.

The man – apparently homeless and known to some neighborhood residents, according to advocates –  is captured on video attempting to get away from armed officers who pursued him for several blocks and repeatedly yelled for him to put down his baseball bat.

Anyone with information is asked to call or text the Confidential TIP-CALL Line at 847-2255.

Man stabbed to death following a dispute in Buffalo's Kaisertown

The suspect is a man who was known to the victim, and is still at large, police said.

The new team will be made up of six police officers and two lieutenants from the Buffalo Police Department and three clinicians and a program supervisor from Endeavor Health Services.

Collision with car takes life of motorcyclist in Cheektowaga

A motorcyclist suffered fatal injuries late Saturday afternoon when he collided with a car at Harlem Road and Maryvale Drive.

Convicted as teen in '98 homicide, Buffalo woman to be freed thanks to domestic violence law

"Our criminal justice system allows for mercy, for reflection," the judge said, "where the defendant herself is a victim."

Yellow crime scene tape could be seen on Nov. 4 outside the John E. Roberts Funeral Home on Grover Cleveland Highway. Charles Durante, a funeral home director there, was found in the middle of the road and later died in what police now say was a suicide. (Aaron Besecker/Buffalo News)

Yellow police tape remained up around the parking lot of the John E. Roberts Funeral Home on Grover Cleveland Highway Monday, hours after a funeral home director, Charles Durante, was found in the middle of the road and later died at ECMC. (Aaron Besecker/Buffalo News)