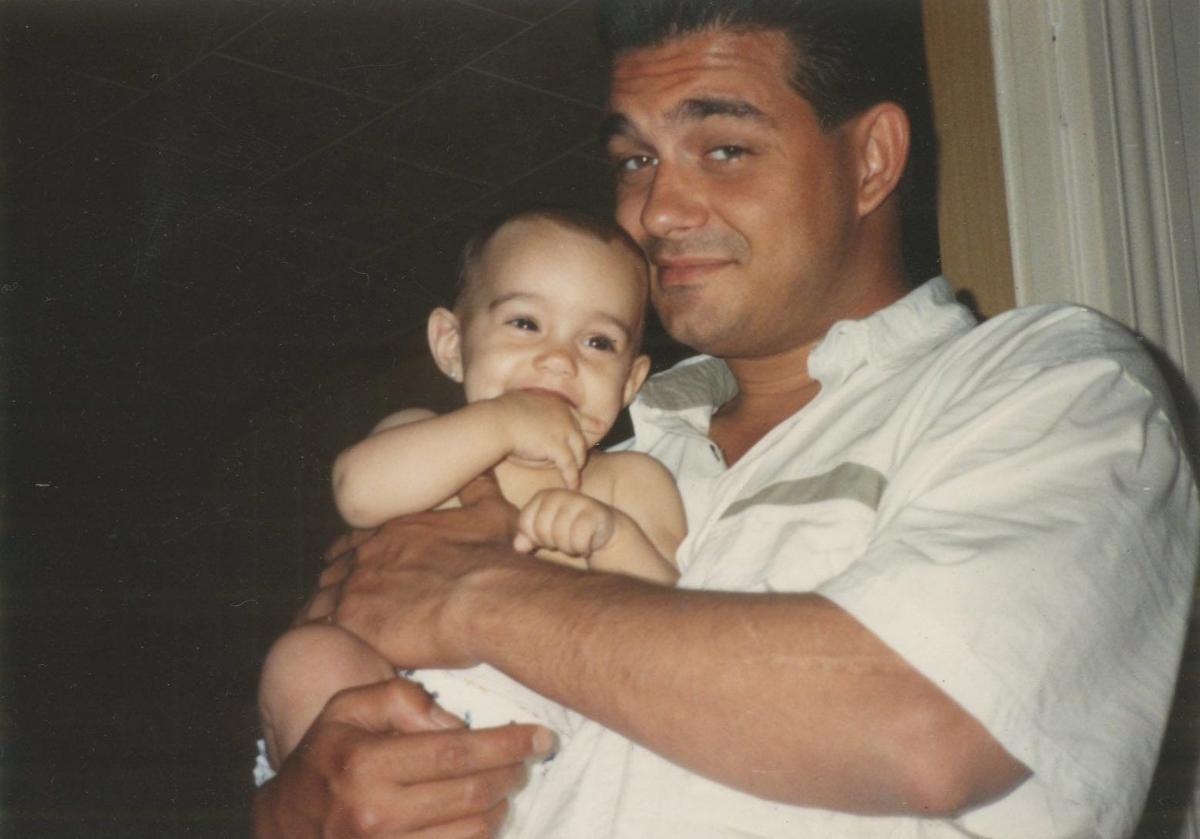 Courtesy of Nicholas HarrisA young Richard W. Matt holds his son, infant Nicholas Harris. Harris, now 23, says his memories of his father are vague, but he clearly recalls meeting with Matt in the Niagara County Jail in 2007. 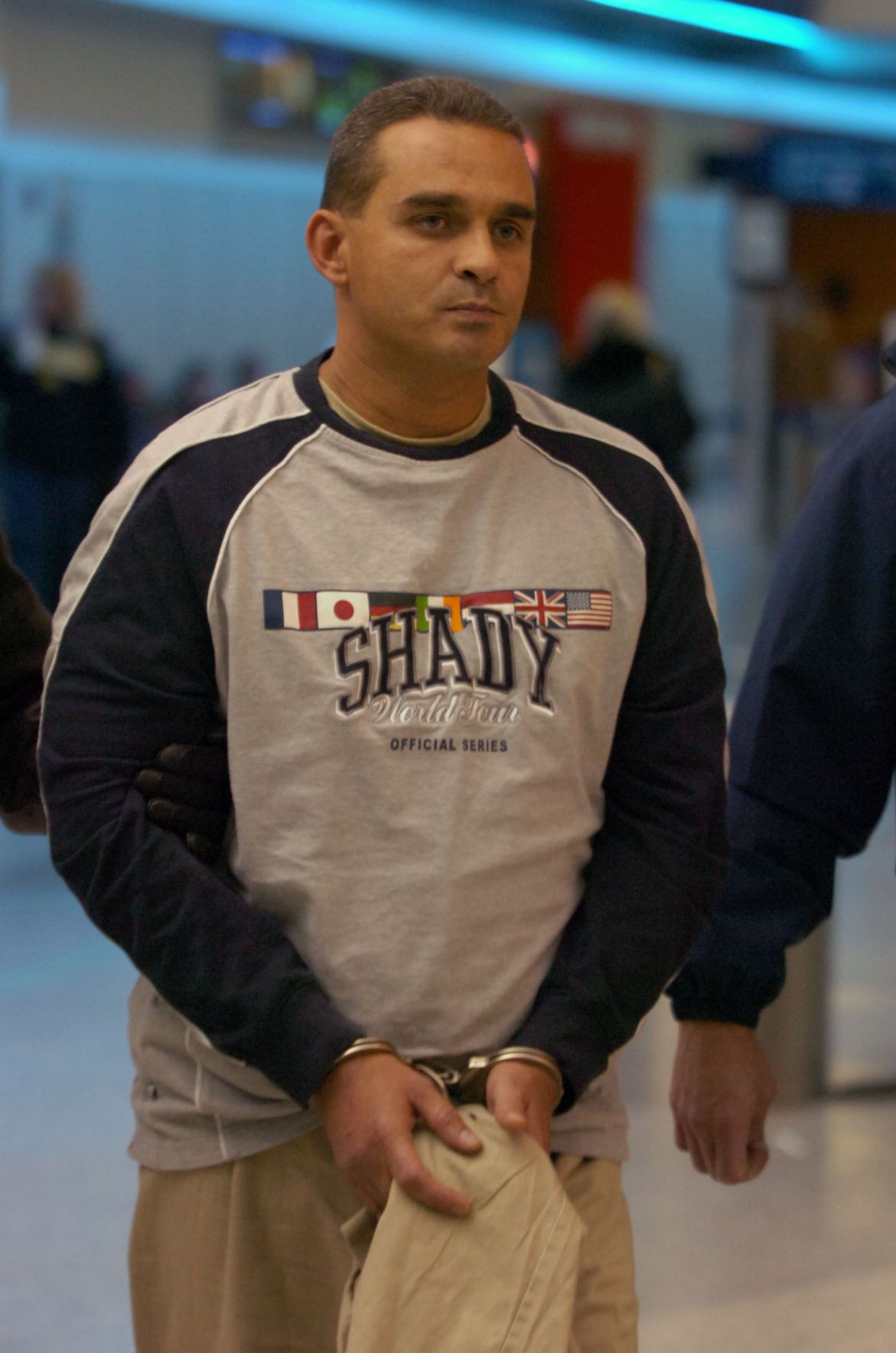 Richard W. Matt is escorted by U.S. Marshals at the Buffalo Niagara International Airport in January 2007.

The only son of convicted murderer and prison escapee Richard W. Matt finds it hard to believe authorities failed to take greater precautions in making sure his father remained behind bars.

“You know he has escaped before. He has a genius IQ. I can’t believe they let this happen,” said 23-year-old Nicholas Harris, who recalled his father bragging to him and his mother about how he had attempted to escape from a Mexican prison and ended up being shot.

“He said he made it up to the roof of the prison and got shot in the shoulder. He pulled down his shirt and showed us the bullet wound. This guy has bullet holes on his body. He’s been shot like nine times. It’s like they can’t kill him. He showed me the scars on his forearms from another time he escaped,” Harris said Monday during an interview outside his family’s Southtowns residence, where he cares for his disabled mother.

Photo gallery: Where WNY’s notorious criminals are locked up

As a frantic, nationwide manhunt was underway Monday after Matt and convicted cop killer David P. Sweat escaped from Clinton Correctional Facility in the Adirondacks, Harris said he hopes the father that he knows just well enough to be afraid of does not make his way to this end of New York State.

Harris says the family stories about his father, who also has a daughter, are frightening.

“My father broke into my mother’s house in Tonawanda and beat her,” Harris said. “I was an infant when it happened.”

Matt, according to his son, seemed doomed from the start to be on the wrong side of the law.

“He was left as an infant in a car. Everybody is born innocent, but he was raised around crime. Then he went into foster care,” Harris said.

A Buffalo police source said that Matt’s father was frequently arrested decades ago in the Broadway-Fillmore neighborhood.

“I arrested him at different times and I can tell you the father was a piece of garbage,” the police source said.

In the City of Tonawanda, where Matt and his older brother, Robert, ended up being raised in foster care, a resident on the block where they lived also said that Matt’s father was often in trouble with the law and that was why the boys ended up in foster care placement.

Matt’s brother and father are deceased, Harris and acquaintances of the family said.

As for Harris’ early recollections of his father, he says they are vague. Richard Matt was in and out of prison. But Harris says he has clear memories of meeting his father several years ago at the Niagara County Jail in Lockport.

“He makes an impression that lingers with you,” said Harris, who is on a leave of absence from college to care for his mother. “My father has always wanted to have a relationship with me.”

And so after Matt was brought back here in 2007 from Mexico, where he had been arrested years earlier and jailed without a trial for killing a man in a barroom fight, Harris visited his father. That’s when Matt regaled his then-teenage son with the story of his attempted Mexican jailbreak, Harris said.

Harris also got a look at the scars on his father’s forearms from a 1986 escape at the Erie County Correctional Facility in Alden.

Showing an old snapshot of his father to a Buffalo News reporter, Harris pointed to a forearm in the photograph and said, “Look, you can see the scars.”

Matt had scaled a correctional facility wall and a gate topped with razor wire, slicing up his arms, for what amounted to five days of freedom before he was caught in his brother’s City of Tonawanda apartment.

During the jailhouse meeting with his father, Harris said Matt appeared “weighed down” from years of being in and out of jail. And there was no end in sight to Matt’s incarceration. A Niagara County jury in 2008 convicted him of abducting, beating, torturing, murdering and dismembering William L. Rickerson, 76, in December 1997. Matt had avoided a criminal trial at that time by fleeing to Mexico, only to be arrested there in 1998 for the fatal barroom fight.

Harris said that although he wrote a letter to his father after their only visit, he decided that a relationship was not for him.

“I was raised by a stepfather,” he said. “I was mature enough at that age to know I already had a father figure. I decided a relationship would not be healthy.”

But not everything Harris knows about his biological father, four years younger than his mother, troubles him. Perhaps the only time the young, dark-haired man with an uncanny resemblance to Matt smiled was in telling how Matt romantically pursued his mother, Vee Marie Harris.

“My mother grew up in Tonawanda and knew him from when he was a kid. He had a crush on my mother and would say to her, ‘If I were older, would you be my girl?’ ” Harris said. “He’d lower his head and kick his foot against the ground when he asked. She would tell him he was so young. But then she met him later when he was in his 20s and he was a good-looking guy. They started dating and she got pregnant with me.”

Harris says he learned of his father’s escape from the state prison over the weekend when a large contingent of New York State Police and Homeland Security officials arrived at his family’s home in Angola.

Matt, 49, and Sweat, 35, convicted of killing a Broome County sheriff’s deputy in 2002, were reportedly last seen in the maximum security prison, situated not far from the Canadian border, at 10:30 p.m. Friday. They were unaccounted for during a 5:30 a.m. bed check on Saturday. Authorities determined that the two inmates, who were in the honor section of the prison, had used power tools to cut through steel pipes to make their escape.

State police, Harris said, asked him and his 53-year-old mother to contact them if they learn anything about Matt’s whereabouts.

“I couldn’t believe it when the State Police and Homeland Security showed up. I thought I had done something wrong and they were coming for me,” Harris said of his initial shock at having so many members of law enforcement at his home.

Harris said he has no idea what his father’s intentions are, but points out that his mother is ill and does not need any more heartache.

And while he doubts his father would surrender, Harris said, “I’m hoping for the best outcome for everyone involved.”

There is a $100,000 reward for information leading to the capture of Matt and Sweat. And as of late Monday, State Police continued to remind the public that the two men are “very dangerous individuals” and any suspicious activity should be reported to 911 or (518) 563-3761.

Sarah Harvey was arrested after police saw her in the square early Sunday morning, according to a police report.

Dennis P. Donahue was sentenced in 2008 to 25 years to life, after a jury found him guilty of second-degree murder in the death of Joan Giambra.

In a bitter court battle, Ryan and Scott Snyder each claim the other is unfit to handle decisions regarding the Seneca Hawk family business or the health care of their mother.

Buffalo police no longer required to show names on their uniforms

Until now, police were required under department policy to display their names and could be brought up on internal charges for failing to do so.

It was the eighth time William Sutherland's request for freedom was rejected by a judge.

The 23-year-old man asked the girl to take explicit photos of herself and to say certain words to him over the phone, the assistant district attorney said.

Courtesy of Nicholas HarrisA young Richard W. Matt holds his son, infant Nicholas Harris. Harris, now 23, says his memories of his father are vague, but he clearly recalls meeting with Matt in the Niagara County Jail in 2007.

Richard W. Matt is escorted by U.S. Marshals at the Buffalo Niagara International Airport in January 2007.