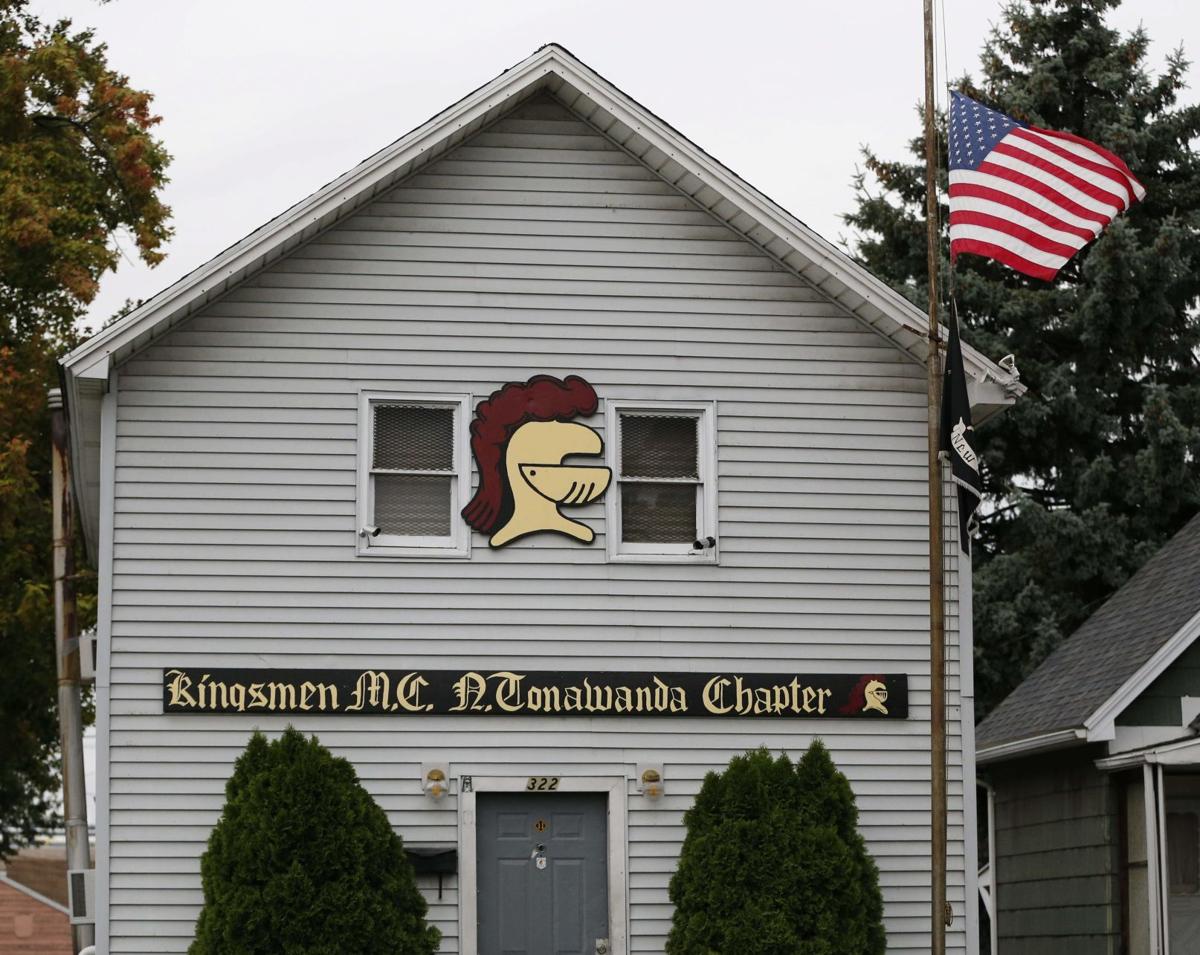 The emerging defense strategy in the trial of three Kingsmen is to blame other members for two murders outside the club’s North Tonawanda headquarters in 2014. (Derek Gee/News file photo) 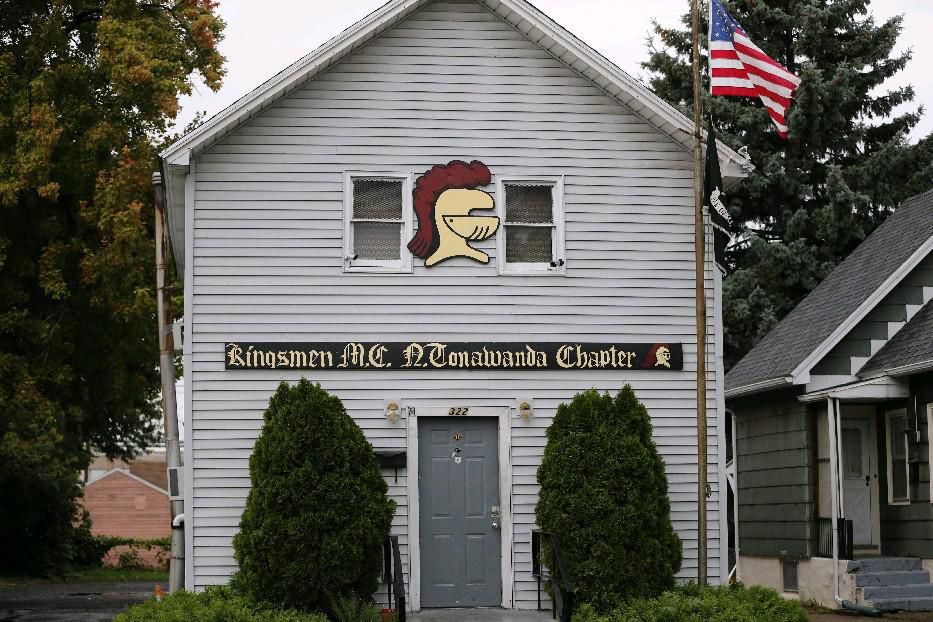 The emerging defense strategy in the trial of three Kingsmen is to blame other members for two murders outside the club’s North Tonawanda headquarters in 2014. (Derek Gee/Buffalo News file photo)

In the hours after the murders of two of his fellow Kingsmen, Roger Albright found himself inside the Olean clubhouse with Andre "Lil Bear" Jenkins.

Albright said he was in the midst of calling other Kingsmen Motorcycle Club members, warning them about the killings and the possibility a rival biker club might be involved, when Jenkins interrupted and said, "I'm here."

When asked what Jenkins meant, Albright told a federal court jury last week that Jenkins was confessing to the murders.

"He said he had shot them," Albright said. "Basically he was saying there was no threat."

Later, Jenkins would claim that the two slain Kingsmen – Paul Maue and Daniel "DJ" Szymanski – had informed on him to another club he was trying to infiltrate, and that the "hit" was ordered by national club president David Pirk, Albright said.

"Yes," said Albright, who is in custody on an unrelated charge and testified as part of a cooperation agreement with the government.

Jenkins eventually fled to Tennessee, he told the jury, but not before asking Albright to destroy his clothes.

Jenkins also told him to keep his mouth shut, or he would end up the "same way," he said.

"What did you understand 'same way' to mean?," Tripi asked.

"I'd be killed," Albright answered.

Albright's testimony is the latest chapter in a federal court trial that centers around the allegation that Pirk ordered the September 2014 killings and saw them as a warning to rivals within the Kingsmen.

Prosecutors claim Pirk, a longtime Kingsmen originally from North Tonawanda, was leading an effort to turn the club into a criminal organization, or "one-percent" club.

Pirk, who has denied the allegations, is on trial with Jenkins and Timothy Enix, a former Kingsmen regional president. And on any given day, you can walk into the courtroom and hear allegations of beatings and shootings.

But some of those allegations, many of them graphic tales of violence, are not directed at the three Kingsmen on trial for murder.

Rather, this testimony, and there has been a lot of it, is designed to point the finger at two other Kingsmen, Filip Caruso and Edgar Dekay II.

In recent days, defense lawyers have repeatedly asked witnesses about Caruso and Dekay and their history of violence, the first step in suggesting one of them may be the real killer.

Caruso, they say, was a known drug dealer, often carried a gun and had been involved in a series of shootings and beatings over the years. They also claim he was angry at Maue for killing his dog.

"Is it safe to say he has one of the worst tempers of anyone you've ever known?," defense lawyer James W. Grable Jr. asked a witness at one point.

"He's up there," answered the former Kingsmen.

Caruso, a co-defendant who is not charged in connection with the murders, is scheduled to go on trial later this year.

The defense also went after Dekay, known as Special Ed, a Kingsmen who in 2014 "jumped patch" and joined the Nickel City Nomads, a Niagara County biker club with ties to the Outlaws, a national club with a reputation as a one-percent organization.

Defense lawyers claim Dekay would force strikers – bikers seeking to join the Kingsmen – to drink urine and was generally viewed as a "cancer in the club."

They also claim he admitted being responsible for the death of Frances "Matt" Christman, a fellow Kingsmen found floating in a pond in the Town of Wheatfield four years ago.

Albright, according to the defense, suspected Caruso and Dekay were involved in the murders but changed his story in order to fit the prosecution's version of what happened and to protect himself from the Outlaws.

"You want to send out a message loud and clear to the Outlaw community," said defense attorney Barry N. Covert. "You want to make sure Oultaw nation knows you're blaming a Kingsmen."

Like many of the witnesses before him, Albright acknowledged he feared for his life and pointed to both the Kingsmen and Outlaws.

One other witness claimed at one point during his testimony that a member of the Outlaws was in the courtroom. Later, when asked if he was an Outlaw and wanted to talk about the trial, the man declined to comment.

Tripi has challenged the defense strategy at every turn and last week asked one of his witnesses about the allegations against Caruso, Dekay and others.

"I think it's a last-ditch effort," said David Masse, who was on the witness stand for five days.

"Did you have anything to do with killing those guys?," Tripi asked him.

In sharp contrast to the defense, prosecutors claim Caruso was Pirk's initial target and that, when that effort failed, Pirk turned to Maue and Szymanski.

From the start of the trial, Caruso's lawyer has suggested the defense strategy was expected and is rooted in Pirk's earliest statements to the FBI when he and Enix suggested Caruso might be the killer.

Emily Trott, Dekay's defense lawyer, said it's important to remember that Jenkins has already been convicted of the murders in state court and is currently serving life without parole. The jury in the federal court case is unaware of Jenkins' conviction.

"I anticipated this," Trott said of the defense. "Desperate people do desperate things."

The defense strategy is also in sharp contrast to the prosecution's claims that it was Pirk who ordered the 2014 murders of Maue and Szymanski outside the club's North Tonawanda clubhouse to send a message to members opposed to him.

Prosecutors also claim it was Pirk, who became national president in 2013, who led the effort to turn the Kingsmen into a "one-percent" club. They claim his goal was to expand its national reputation and footprint by competing with the Pagans, Outlaws and other one-percent clubs engaged in crime.

All three defense attorneys have suggested that their clients were dead set against the move to a "one-percent" club and, to the contrary, fought to keep the Kingsmen clean.

In recent days, they also have used their questioning of former Kingsmen members to elicit testimony about the peaceful settlement of several disputes, some internal, some with other biker clubs, that Pirk and Enix helped engineer.

In short, they are pointing the finger at Caruso and Dekay while arguing that Pirk and Enix were the peacemakers in the club.

The trial before U.S. District Judge Elizabeth A. Wolford centers around a 2016 grand jury indictment charging Pirk, Enix and Jenkins with drug dealing, gun sales, acts of violence and operating a criminal conspiracy.

Federal prosecutors on Thursday said a Buffalo man was charged with trafficking crack cocaine following a search of his residence the day before.

'I would never wish this on my worst enemy': Young victim of gun violence learns to heal

Quintasia Livingston was one of 355 people who were shot in Buffalo in 2020, nearly double the toll in 2019.

“Clear evidence showed that the officer acted inappropriately and below the standards of the Sheriff's Office,” said Sheriff Timothy B. Howard’s undersheriff, John W. Greenan.

Shortly before 9 a.m., police and firefighters responded to a call of a vehicle in the water near the foot of Porter Avenue.

The emerging defense strategy in the trial of three Kingsmen is to blame other members for two murders outside the club’s North Tonawanda headquarters in 2014. (Derek Gee/News file photo)

The emerging defense strategy in the trial of three Kingsmen is to blame other members for two murders outside the club’s North Tonawanda headquarters in 2014. (Derek Gee/Buffalo News file photo)