DA calls Metcalf death in jail 'preventable,' calls for Holding Center changes
0 comments
Share this
Support this work for $1 a month
1 of 2 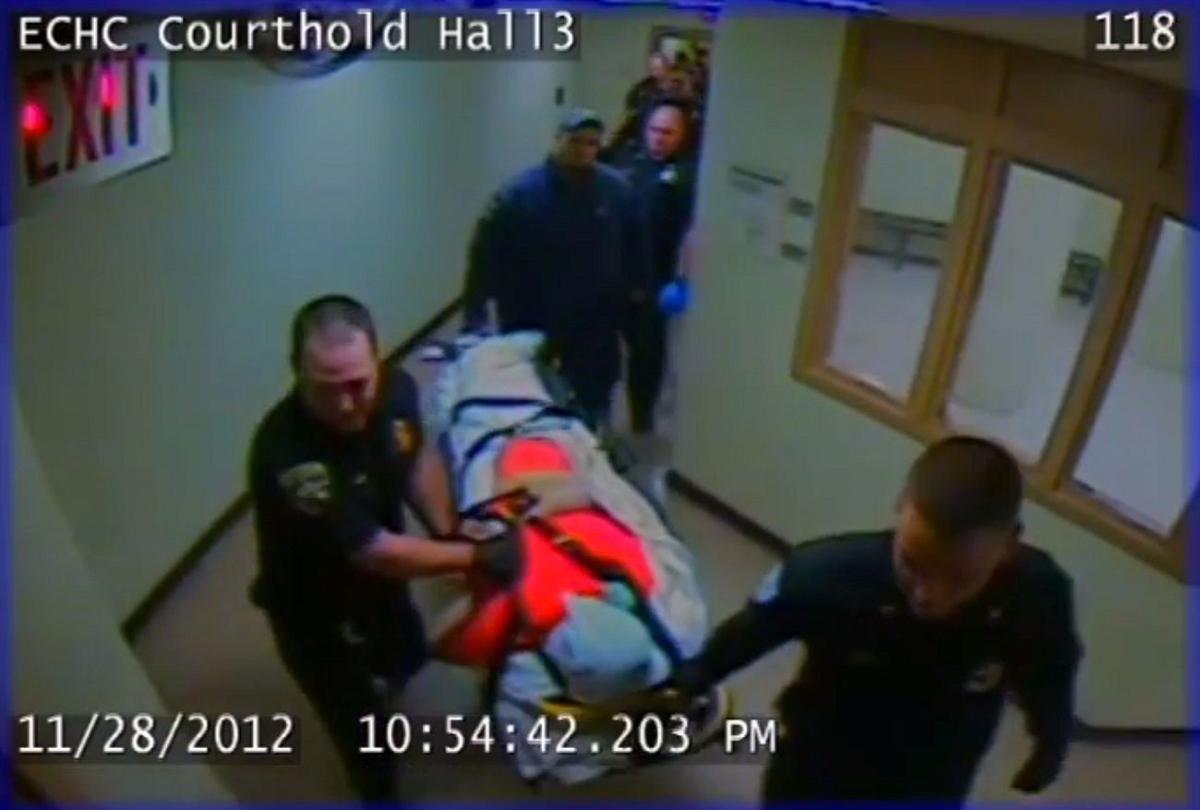 An appeals court has overturned a ruling governing jail operations in Erie County. The 2012 death of inmate Richard A. Metcalf Jr., shown on the gurney in this screenshot from the Holding Center, was among several instances of mismanagement that led to the original ruling. 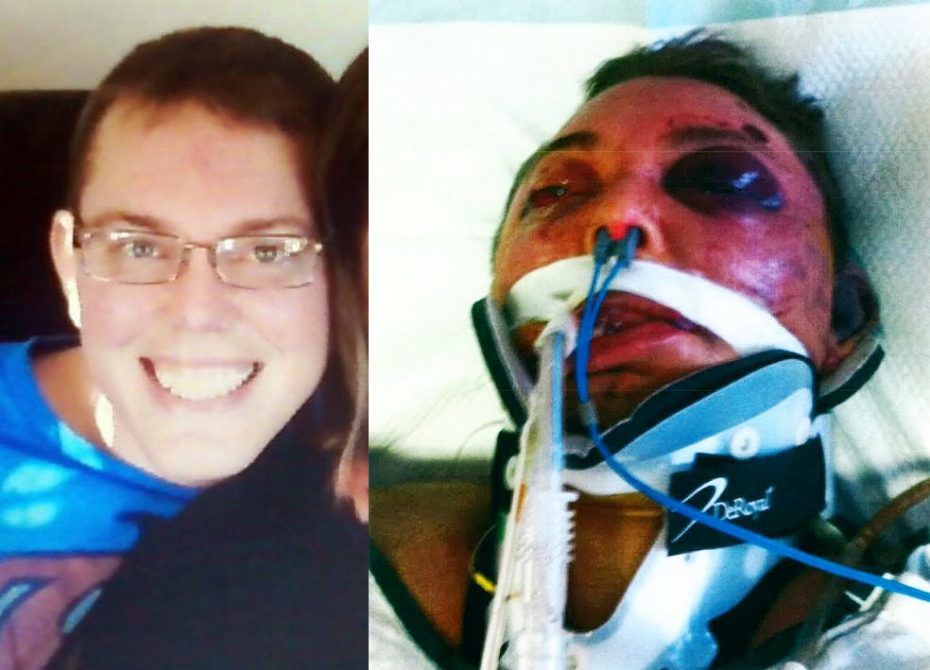 Richard A. Metcalf Jr., before and after his stay in the Erie County Holding Center. (Photos provided by the Metcalf family)

Cattaraugus County District Attorney Lori Pettit Rieman told the father of Richard A. Metcalf Jr. Friday morning she will not bring any criminal charges against Erie County Holding Center deputies in his death, according to the family's attorney.

Rieman issued a written statement Friday afternoon saying she has concluded, "unfortunately, that there is insufficient proof to bring criminal charges against any of the involved parties."

She also said she wants what happened to Metcalf to "prompt serious changes at the Holding Center, even if it is as the result of the public civil trial and subsequent finding of civil negligence."

Rieman also offered what she described as her "personal opinion" that "Richard Metcalf's death was completely preventable."

The five-year statute of limitations on potential charges of manslaughter and criminally negligent homicide expired a few weeks ago, leaving the only potential charge against the deputies being murder, attorney Thomas J. Casey said.

"The fact pattern in this case doesn't fall within that category," Casey said. "The statute is five years except for murder and this was not a murder case."

Metcalf, of Lancaster, died Nov. 30, 2012. A spit mask had been knotted around his neck and a pillowcase was pulled over his head as he was being wheeled by jail deputies out of the Holding Center two days earlier. He was 35.

Then-Erie County District Attorney Frank A. Sedita III declined to press charges in the case. The state Commission of Correction found that missteps by Erie County Sheriff Timothy B. Howard's jail deputies caused Metcalf's death. A 2016 report by the commission urged Erie County prosecutors to take another look at the death. The investigation was handled by Cattaraugus County because one of the prosecutors in the Erie County District Attorney's Office is married to a jail official who is a key figure in the case.

"Metcalf's death was a homicide caused by restraint methods used by Erie County deputies," the commission found in October 2016.

Casey said he and Metcalf's father, Richard Metcalf Sr., met with the district attorney Friday morning for more than an hour.

"We're very appreciative that she afforded us the opportunity to sit down and talk with her," Casey said. "She's the first prosecutor that's done that."

Richard Metcalf Jr., who had never been diagnosed with a mental illness, jumped through a window on Nov. 25, 2012. Two days later, he broke into Joseph's Country Manor and Grove and, despite the cold temperatures, had left his apartment in bare feet and wanted to cool down in the Manor's walk-in refrigerator. Depew police shocked him twice with a Taser after he reportedly came at them with a metal wrench.

He was taken to Erie County Medical Center for evaluation, then back to the Depew police station where authorities said he was smearing feces on himself and the cell floor. He was then taken to the Holding Center and brought back to ECMC later that day after some type of assault.

At the Holding Center on the night of Nov. 28, 2012, Metcalf was reportedly saying he was "radioactive," repeating the words "slaughter house" and picking at his arms with a plastic fork, drawing blood and refusing to willingly go to the medical unit, according to jail personnel.

About a half-dozen deputies forcibly removed him from his cell and he began spitting blood while he was being transported. The spit mask was put on in an examination room in the medical unit, and he chewed through it, leading to personnel putting a pillow case over his head.

He was again taken to a hospital. He had been in cardiac arrest for at least 10 minutes by the time he arrived at Buffalo General Medical Center, according to the commission's report. Jail deputies did at least four things wrong as they tried to prevent Metcalf from spitting blood in their direction, the commission found.

Rieman, the Cattaraugus County DA, has previously questioned the credibility of the state forensic pathologist who concluded Metcalf was strangled. She also refused to speak with the emergency room physician who examined Metcalf on the night of Nov. 28, 2012.

In her statement Friday, Rieman cited the two different causes of death determined in the autopsy and the "Medical Review Board" of the commission. Because of the differences, "it would be difficult, if even possible, to convince a jury of 12 persons that criminal liability should be imposed where the case of death is disputed."

She went on to point to multiple opportunities for Metcalf's death to have been prevented.

"I also agree with the Correction's Commission [sic] that, had Mr. Metcalf received appropriate crises level [sic] mental health care for his acute mental health crisis with proper restraint methods and pharmacologic interventions, his death could have been prevented."

Since the medical examiner's determination in 2009, there have been six reviews of the circumstances of Wienckowski's death that have either resulted in different conclusions or called into question the ME's findings.

Buffalo man gets to 25 years to life for 2019 Vulcan Street slaying: 'You could have walked away'

Jevon Gaiter was found guilty of killing Mark Bottita, 59, on Sept. 21, 2019, in front of a corner store on Vulcan Street in the Town of Tonawanda.

The shooting of Willie N. Henley followed months of nationwide protests against police brutality and racism. It also sparked new protests in Buffalo.

An appeals court has overturned a ruling governing jail operations in Erie County. The 2012 death of inmate Richard A. Metcalf Jr., shown on the gurney in this screenshot from the Holding Center, was among several instances of mismanagement that led to the original ruling.

Richard A. Metcalf Jr., before and after his stay in the Erie County Holding Center. (Photos provided by the Metcalf family)