Nineteen-year-old Anthony C. King was killed four years ago after his friend unintentionally shot him at a home in Elma.

A few days before the shooting, King's friend, Jake O. Klocek, purchased ammunition at a Cabela's store in Cheektowaga, according to a lawsuit filed by King's parents that alleges the retailer violated age requirements for the sales of ammunition.

Cabela's tried to get the lawsuit dismissed, based on unique protections given to the gun industry under a 2005 federal law.

But a ruling from the state Appellate Division's fourth department earlier last month allowed the lawsuit to proceed.

In its decision, the court recognized an exception in the law for situations in which a company involved in selling guns or ammunition is alleged to have knowingly violated a law, said Jonathan E. Lowy, chief counsel for Brady, the nonprofit organization formerly known as the Brady Campaign to Prevent Gun Violence.

"Cabela's, like other gun companies, has argued that this law gives them extremely sweeping immunity from civil justice, that even if they're negligent or reckless and cause harm, they can't be held liable," Lowy said. "And this decision by fourth department is the latest rejecting that view and holding that gun companies are not completely above the law."

The attorney representing Cabela's in the lawsuit did not respond to requests for comment.

Around 8:40 p.m. Nov. 6, 2016, the Erie County Sheriff's Office received a call of a person shot on Dorris Drive in Elma, according to a search warrant application filed in court as part of the lawsuit.

Anthony King, who was from Elma and was attending the University at Buffalo, had been shot in the abdomen and was taken to Erie County Medical Center. He died at 11:01 p.m., according to his death certificate.

Klocek, of East Aurora, then 19, was arrested the next day on charges of manslaughter and weapons possession. Prosecutors said Klocek, who had been house-sitting for the family that lived at the Dorris Drive home, was reckless while showing his friend a gun.

Klocek pleaded guilty to second-degree manslaughter in July 2017 and was sentenced three months later to 4 to 12 years in prison.

Anthony King and Jake Klocek, along with a third person who was in the house at the time of the shooting, were friends, said Leonard D. Zaccagnino, an attorney for Timothy J. King and Christina A. King, Anthony's parents.

"It's a tragic situation for everyone involved," Zaccagnino said.

According to the parents' lawsuit, Klocek bought two types of ammunition Nov. 3, 2016, from the Cabela's store on Walden Avenue in Cheektowaga.

But Klocek, according to the lawsuit, was too young to buy ammunition for a handgun since he was under 21, the minimum age in New York State a person must be to legally own a handgun. The lawsuit claims the ammunition sale violated state and federal law, and it's that alleged violation of law that the appellate judges cited to allow the lawsuit against the retailer to move forward, said Lowy, who argued the case before the fourth department.

The two types of ammunition purchased were .45 ACP and .357 Magnum, according to the lawsuit. Police determined Klocek fired a .45-caliber handgun in the shooting that killed King.

The federal law at the center of Cabela's attempts to have the lawsuit dismissed is the Protection of Lawful Commerce in Arms Act. The law "generally shields licensed manufacturers, dealers and sellers of firearms or ammunition, as well as trade associations, from any civil action 'resulting from the criminal or unlawful misuse' of a firearm or ammunition," according to the Congressional Research Service. The law allows for six exceptions, including lawsuits alleging negligence against a "seller," according to the research service's analysis.

The King family's wrongful death lawsuit, filed in November 2018, alleges negligence on the part of Klocek and Cabela's. It also alleges the owners of the home, John L. McCarthy Jr. and Lynn F. McCarthy, acted negligently by keeping several guns in a gun safe that was unlocked and open.

The McCarthys deny having any responsibility for King's death, which was a "tragic occurrence," said their attorney, Hilary C. Banker.

Klocek, who will turn 24 early next year, is scheduled to have his first parole hearing in June, according to records from the state Department of Corrections and Community Supervision. If he's granted parole at that initial hearing, he would be eligible to leave prison next October.

Attorneys for Cabela's challenged State Supreme Court Justice Diane Devlin's June 2019 ruling denying the retail chain's motion to dismiss the lawsuit. Klocek, who is incarcerated in Marcy Correctional Facility just north of Utica, is scheduled to submit to a deposition this month.

The appellate court's ruling should be considered important, according to Lowy, the Brady attorney, because one major contributing factor to gun violence in the United States is gun industry negligence.

"There are a lot of gun deaths and injuries that occur because gun companies act irresponsibly," Lowy said. "So it's important whenever a company or industry acts in an irresponsible way, that they be held accountable."

The Editorial Board: Court strikes down shocking claim that store can break a law with impunity

It’s something other than tragedy when a store seeks to defend itself by hiding behind a federal law that shields the gun industry from liability in many cases.

If gun groups continue to reflexively oppose any reform out of fear of a slippery slope, gun owners risk a private-sector backlash that could be worse than some of the reform proposals they oppose, Rod Watson writes.

East Aurora man, 20, gets prison for unintentionally shooting and killing his friend

Apologies and testimonials to his good character only slightly mitigated the prison sentence for Jake Klocek, a 20-year-old from East Aurora who unintentionally shot and killed his friend last fall as he showed him a gun. Jake Klocek, 20, of East Aurora received a sentence Thursday of 4 to 12 years in prison after pleading guilty in July to

A young East Aurora man pleaded guilty Wednesday to manslaughter in the second degree in the shooting death of a friend last fall. Jake Klocek, 20, was house-sitting for acquaintances at a home on Dorris Drive in Elma on Nov. 6 and invited Anthony C. King and another friend to come over. Investigators said the men found an unloaded

An East Aurora man pleaded not guilty Friday in Erie County Court to manslaughter and criminal possession of a firearm in connection with the shooting death of his friend in November. Jake Klocek, 19, is accused of recklessly causing the death of Anthony C. King, 19, of Elma, on Nov. 7. Klocek reportedly was house sitting at a home

Shooting death in Elma was likely 'reckless handling of gun'

Erie County Sheriff’s detectives are trying to determine what was going on when Jake Klocek allegedly fired a loaded handgun, killing Anthony King, while Klocek was house-sitting in an Elma residence Sunday night. “Right now it appears to be reckless handling of a gun, but the investigation is still continuing,” sheriff’s spokesman Scott Zylka said Tuesday. “We’re still trying

A 19-year-old man died after an ‘accidental shooting’ on Sunday night in Elma, according to the Erie County Sheriff’s Office. Another 19-year-old has been charged with manslaughter after the shooting on Dorris Drive, the sheriff’s office said Monday. Jake Klocek, of East Aurora, was charged with second-degree manslaughter and second-degree criminal possession of a weapon, according to authorities. The 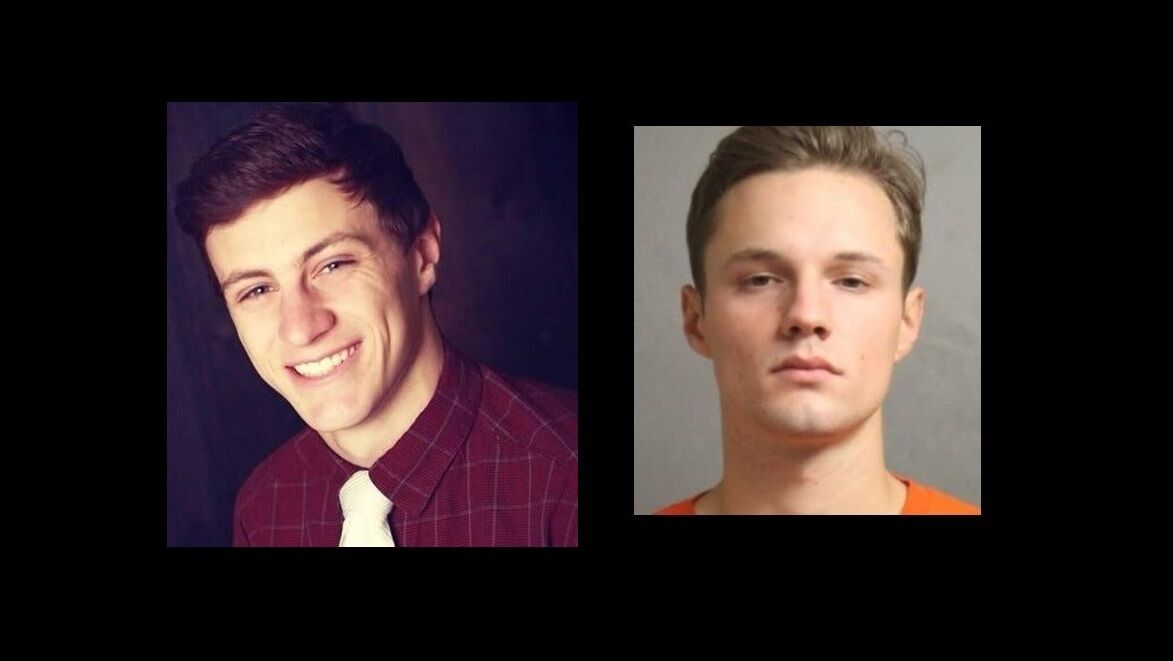 Anthony C. King, 19, left, was killed after he was unintentionally shot by Jake O. Klocek in Elma in 2016. A recent court ruling allows a lawsuit by King's parents to proceed against Cabela's. 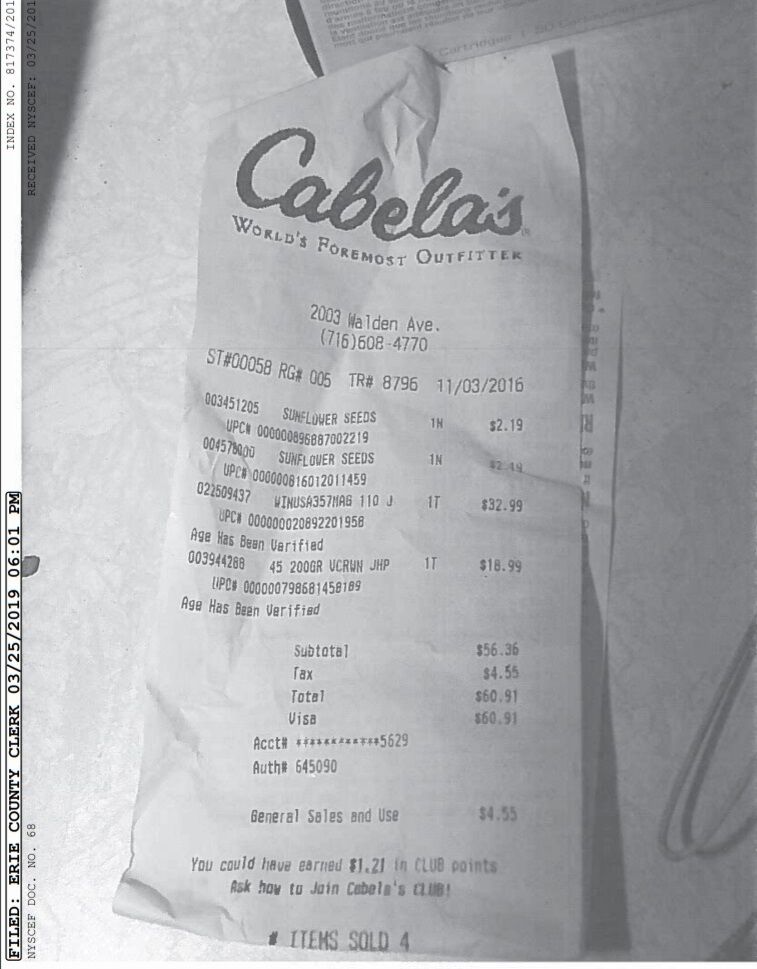 Attorneys for Cabela's filed as part of its motion to dismiss a photograph of a receipt for the purchase of ammunition made Nov. 3, 2016, from the store on Walden Avenue in Cheektowaga.