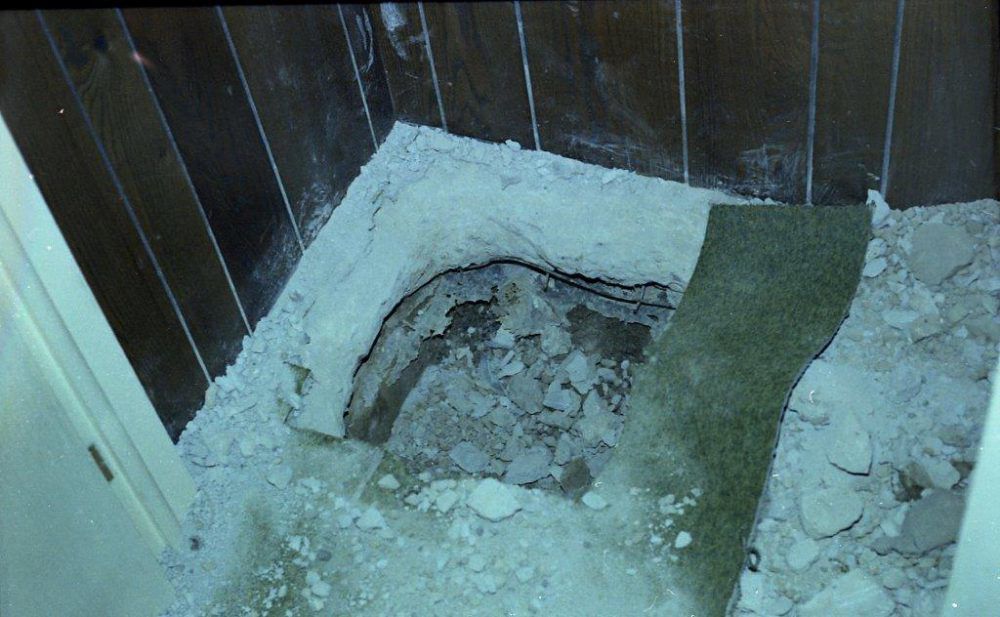 The hole in the floor at the Ski Wing resort where the killers stole a safe containing $18,000. (Photo from State Police) 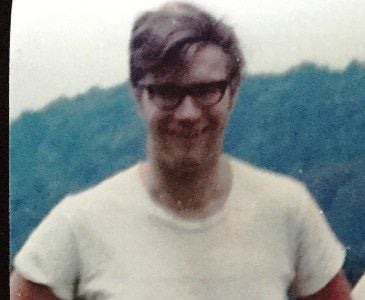 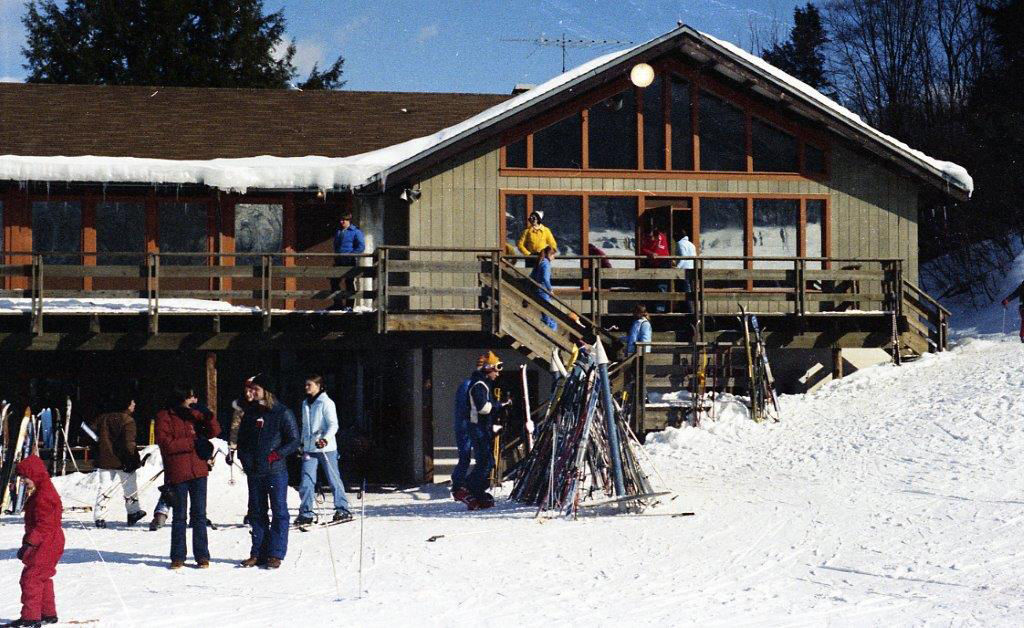 Photo of skiers at Ski Wing a few days after the murders in 1978. For Dan Herbeck story about cold case murder 40 years ago at Ski Wing. 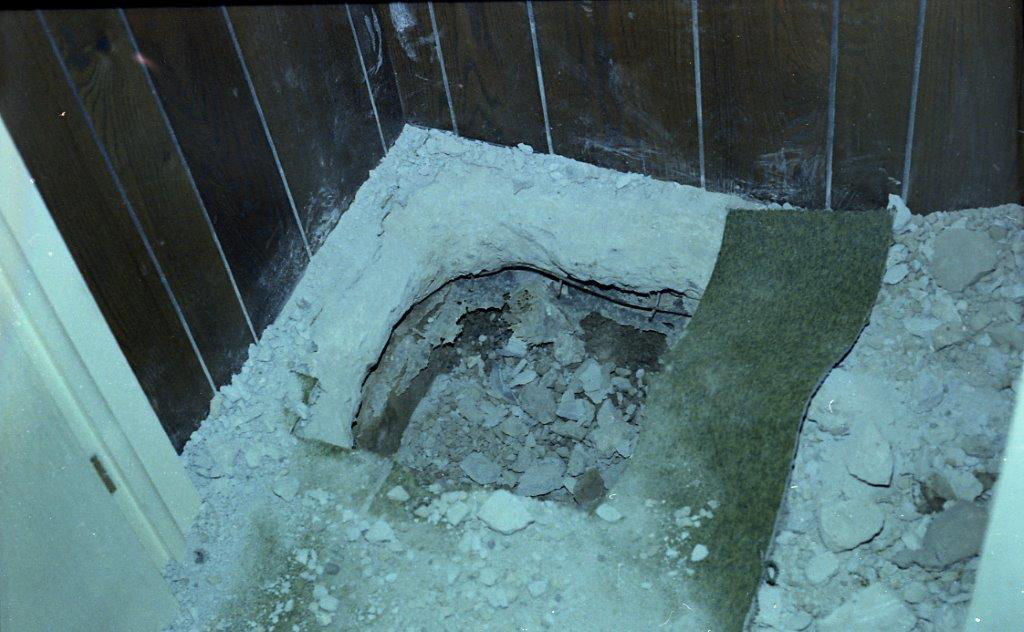 The is hole in the floor at Ski Wing where killers stole the safe in 1978 after shooting two young men. (Photo provided by State Police) 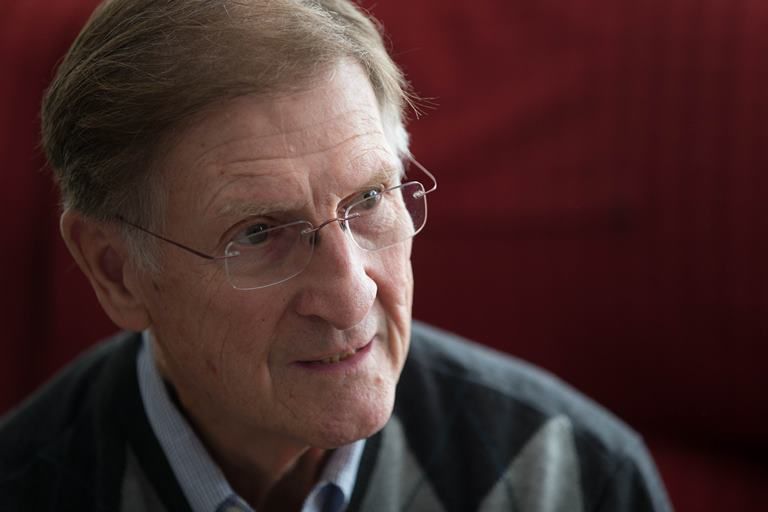 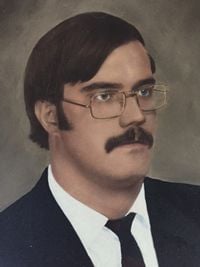 Michael Forness was shot execution-style when he and a co-worker interrupted a burglary at Ski Wing in 1978. (Photo provided by Forness family) 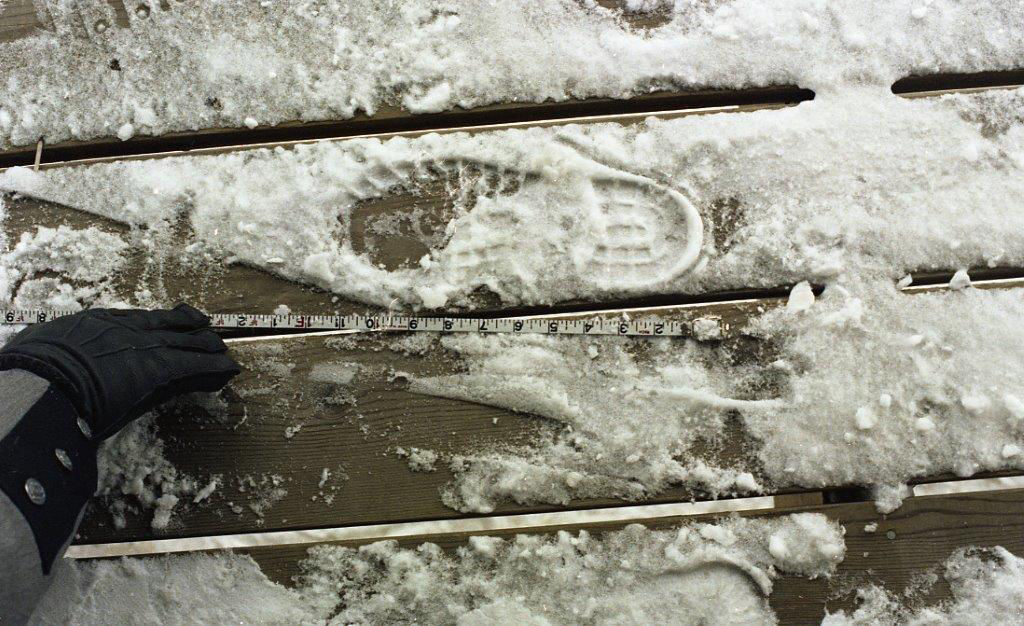 A boot print in the snow is one of the few clues for unsolved double murder in 1978 from Ski Wing in Southern Tier. (Photo provided by State Police)

The two young men – ski trail groomers working an overnight shift at the Ski Wing resort a few miles outside Olean – took a break and went into the chalet sometime between midnight and 1 a.m. The two stepped inside for a few minutes to warm up and perhaps to pick up some tools to repair a snow-grooming machine that had broken down that night, state police investigators later theorized.

Inside the building, burglars were digging up a cash-loaded safe from the concrete floor of a manager’s office.

That is when the burglars became killers. They shot Forness, 29, and Bender, 30, three times each. Both had execution-style shots to the back of their heads.

After killing the two men, the intruders hauled away the heavy safe and got away with $18,000. A janitor showed up to work around 3 a.m. and found the bodies of Forness and Bender.

The murders were among the most notorious crimes ever to take place in the region, Olean city historian David G. Deckman said.

Rumors about the murders and who was behind them swept through the community for decades and still crop up, said retired Cattaraugus County Judge Michael L. Nenno, an avid skier.

Michele Bush, Forness’ younger sister, said she and her family never will get over what happened that night.

“I’m not going to say I specifically think about it every single day, but it’s always there,” said Bush, now an Arizona resident. “A few years ago, there were all kinds of rumors that an arrest was finally going to be made. When that didn’t happen, it was really hard on our family.”

The Ski Wing case still frustrates J. Thomas Stofer, 81, a retired State Police investigator who was at the murder scene that morning and spent more than 30 years trying to run down hundreds of leads, tips and theories, all to no avail.

“What bothers me is these were two innocent working men, out there working a midnight shift on a bitter cold night,” Stofer of Amherst said. “The guys who did this were hard-core criminals. They went there with guns, and they were ready to use them to make sure there were no witnesses.”

Giardini, 43, grew up about three miles from the Ski Wing, and he has heard about the crime since he was a youngster.

Rieman said her office has looked into the case with State Police several times since she became district attorney in 2010. She said she cannot imagine how difficult it has been for the families of the two victims to live with the tragedy for nearly four decades.

“We’ve actively looked into this and we’ll continue to do so,” Rieman said. “I would love to prosecute that case. That’s what people like me live for.”

Ski Wing, which also had been known as Wing Hollow, closed because of financial difficulties a few years after the murders. It was located on Five Mile Road in the Town of Allegany, just north of Olean. Bender lived in Olean and Forness in the nearby village of Cuba.

Temperatures dipped as low as nine degrees on the night of the murders, according to the National Weather Service.

About a month after the crime, police found the 175-pound safe in the Allegheny River near the Vandalia Bridge, several miles from Ski Wing. The safe had been cracked and the money was gone.

Michele Bush recalled that Forness, the oldest of her three brothers, was a powerfully-built, intelligent young man who had a degree in chemistry from the state college at Cortland. He taught in a public school for several years, but did not enjoy teaching. He then began a career as a bricklayer, which he did enjoy, and he also worked in the winter months getting the hills at Ski Wing ready for skiers.

“A couple of weeks before this happened, there had been another break-in at Ski Wing. Michael caught some teenagers in there,” Bush said. “I believe that when he saw someone had broken in again, he probably thought they were teenagers again, and he probably rushed in after them.”

Instead of finding inexperienced teenagers,  Forness and Bender found themselves facing armed, experienced bandits who apparently had some inside knowledge of the workings of Ski Wing, police say.

“They had to be professional criminals with some basic knowledge of the business …knowledge that there would be a lot of money in the safe, that it was buried in the floor and they would need certain tools to get it out,” Rieman said. “These guys were prepared to kill innocent people to hide what they did, and they apparently have stayed quiet about it all these years.”

Many people who live in and around Olean “still call us with tips, and we still do pursue them,” said Lt. Brian Ratajczak, who works in the State Police Bureau of Criminal Investigation at Troop A in Batavia.

Michele Bush said she is disappointed that police never found her brother’s killer. She said the lack of arrests was especially painful for her late father, John Forness, a Navy veteran of World War II and the Korean War who was well known in the Southern Tier for his volunteer activities. John Forness, who worked for the U.S. Postal Service and ran a rehabilitation facility for hawks and other wild birds, died in 2012 at age 87. His widow, Mary, now lives in a nursing home.

“After it happened, my father would say, ‘I wish it had been me, and not Michael,’ ” Bush recalled. “My mother took it hard, too. She left my brother’s room exactly as it was for at least 20 years after he was killed.”

Although investigators say the case remains open, Bush seems resigned that it will not be solved.

Stofer and Rieman said they still hold out hope for solving the murders. Both were involved in the successful “cold case” investigation that led to two convictions in the 1994 slaying of Andie Gasper, 32, who was stabbed to death in a department store parking lot in Yorkshire. Gasper’s widow, Cheryl Gasper, and her former boyfriend, Randall Knight, were convicted of crimes and sentenced to lengthy prison terms more than 16 years after the murder. Authorities said Andie Gasper was killed so his wife could cash in on a $100,000 life insurance policy.

State Police officials ask anyone with information about the killings of Forness and Bender to call Guliani at the barracks in Machias, (716) 373-2552.

“Over the years, allegiences can change,” Stofer said. “People who never would say anything before decide to come forward. Friends turn into enemies. Guys get arrested and decide to cooperate for self-preservation. Someone on his deathbed decides to clear his conscience.”

Stofer, who worked as a cold case investigator for the Cattaraugus County DA’s office and Sheriff’s office after taking his State Police pension in 1997, retired for good in 2012. He spent 50 years in law enforcement and said he never had a case as perplexing as the Ski Wing murders.

“I’d love to see it solved,” Stofer said. “I still think about this case every day.”

No motive ever found for 1995 Christmas murder

Mystery of girl's death began when she got in friend's car

The hole in the floor at the Ski Wing resort where the killers stole a safe containing $18,000. (Photo from State Police)

Photo of skiers at Ski Wing a few days after the murders in 1978. For Dan Herbeck story about cold case murder 40 years ago at Ski Wing.

The is hole in the floor at Ski Wing where killers stole the safe in 1978 after shooting two young men. (Photo provided by State Police)

Michael Forness was shot execution-style when he and a co-worker interrupted a burglary at Ski Wing in 1978. (Photo provided by Forness family)

A boot print in the snow is one of the few clues for unsolved double murder in 1978 from Ski Wing in Southern Tier. (Photo provided by State Police)