Cold Case Files: No motive ever found for 1995 Christmas murder
0 comments
Share this
Support this work for $1 a month
1 of 2 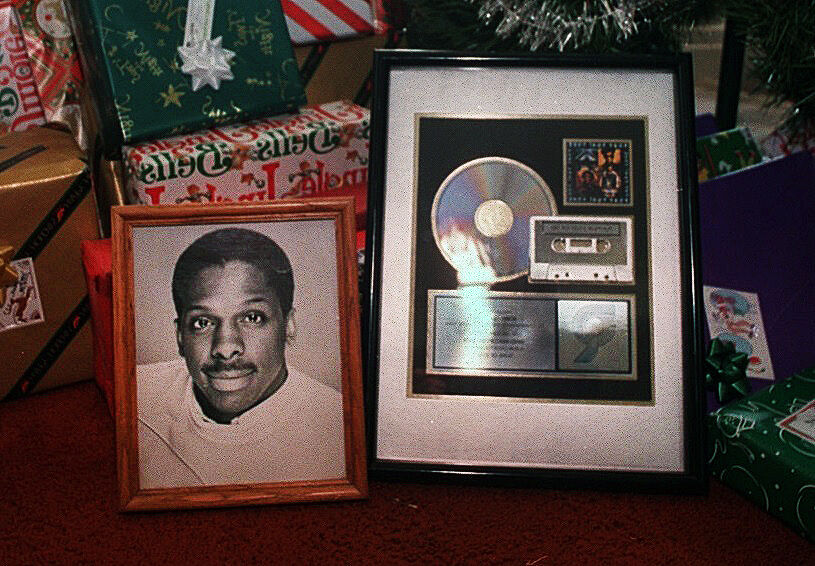 Ernest “Bobby” Crawford Jr., a Buffalo native who found success as a music producer in New York City, was shot and killed on Dec. 22, 1995, in his mother's driveway on Glenwood Avenue. (Buffalo News file photo) 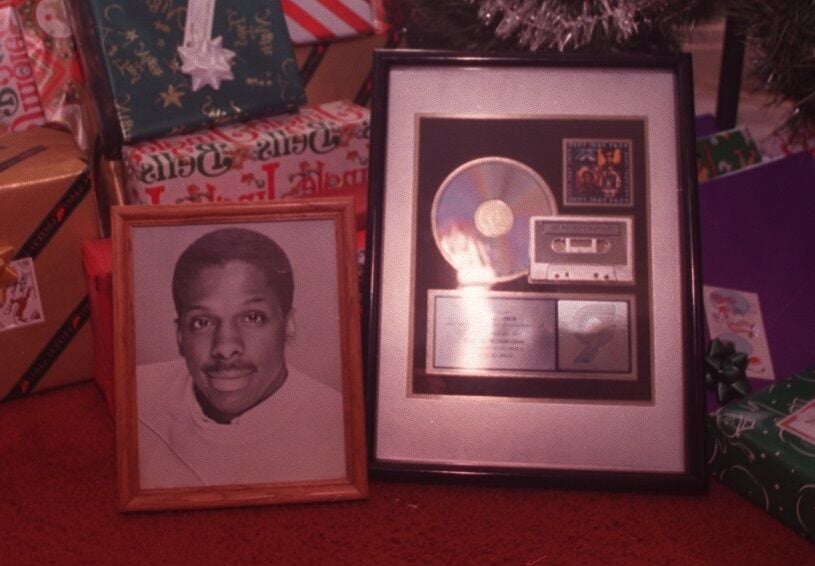 Christmas 1995 was supposed to be one of the best holidays ever for the Crawford family on Buffalo’s Glenwood Avenue. Relatives were arriving from several states. Some hadn’t seen their Buffalo family members in years.

Ernest “Bobby” Crawford Jr., a Buffalo native who found success as a music producer in New York City, had come back to Buffalo with his wife, Etsuko, and their three young children. After putting his kids to bed at his mother’s home on Glenwood, Crawford went outside to start his mother’s car. He planned to meet up with a Buffalo cousin he had not seen in four years.

As the 30-year-old Crawford got into the vehicle at about 12:40 a.m. Dec. 22, someone shot him twice in the face. He collapsed and died in his mother’s driveway.

A witness saw two young men running away into the night.

Nearly 21 years later, members of a Buffalo Police Cold Case Squad are still hoping to find a lead that helps them solve the murder.

“No motive for this crime has ever been found,” Detective Mary Evans said earlier this month. “To this date, we’ve never found anything that indicates this man was targeted for any reason. He had just arrived from out of town with his wife and kids.”

Police found no evidence that anyone in Buffalo had any reason to harm him. There was no robbery. Whoever shot him did not steal his wallet or anything else.

From the first day of the investigation, detectives have theorized that Crawford may have been the random target of two young thrill-seeking gunmen. Police believe the same two gunmen may have been responsible for attempts to shoot two motorists on nearby Humboldt Parkway, just minutes before Crawford was shot.

“We had three very similar incidents, apparently with the same two suspects involved, over a span of 23 minutes,” Homicide Bureau Chief Charles T. Fieramusca Jr., told The Buffalo News hours after the murder.

“From all appearances, we had a couple of idiots out on the East Side, shooting at people for no reason. When there’s some reason behind a shooting – like robbery, drugs or revenge – that’s bad enough. But when you have two kids out shooting at people, just to see what happens, that really concerns me.”

Cold case: Mystery of girl's death began when she got in friend's car

Police also acknowledged that Crawford – who had lived away from Buffalo for years before the shooting – could have been mistaken for someone else.

Random shootings do occur, but they are exceedingly rare, Evans said.

“Based on the shootings we’ve had in Buffalo over the past two or three years, the majority, if not all, of the victims have either been specifically targeted, or they were innocent bystanders who were hit by a shooter who was trying to hit someone else,” the detective said.

Essentially, the investigation is at a standstill. That is why detectives are asking anyone with information about the crime to come forward.

“Somebody out there knows what happened,” said Benjamin Frazier, a Philadelphia police lieutenant and longtime friend of the Crawford family. “I envision someone in Buffalo who might read about this in the newspaper. They might be sitting in their living room, wrapping Christmas presents for their own family. They might say to themselves, ‘This guy was shot, three little kids lost their father, and I knew what happened and didn’t tell anyone about it.’ It’s not too late for that person to come forward. I think it would help this family greatly to find out the truth.”

Etsuko Crawford and her daughter, Shamina Crawford, said they still hold out hope that the killer or killers will be caught. They want solved the mystery that has haunted them for more than two decades.

“I have no memory of my father at all, except for a few brief and vivid fragments of the day that he passed,” said Shamina Crawford, now 26, who lives in Los Angeles. She was 5 when her father was slain.

Her brothers, Kalif and Jabari, were ages 2 and 1.

Shamina remembers the long train ride with her parents and siblings to Buffalo, and her father tucking her into bed and saying goodnight in one of the bedrooms in her grandmother’s home. Shamina had trouble getting to sleep.

Then, she recalls, everyone in the house was screaming and her grandmother was calling 911 for help.

She remembers one of her cousins holding Jabari, who was sobbing. The next memory she has is of her whole family, sitting in her grandmother’s living room – a room all decked out for Christmas – solemnly trying to come to grips with the tragedy.

Several months later, Shamina recalls seeing a picture of Jesus Christ surrounded by angels, and she remembers asking her grandmother, Barbara Crawford, if her father was ever going to come back. Her grandmother told her that her father was not returning.

“I think that was when I truly internalized the fact that he was gone forever,” Shamina said.

Kalif Crawford, now 23, and living in San Francisco, has no memories whatsoever of his father.

“All I know about him is how he looks in pictures” and stories told to him by his grandmother and other loved ones, Kalif Crawford said. He said he has dealt with difficult emotions – the same problems faced by other people who never knew their fathers.

He said he is extremely proud of his mother and the way she raised her family after the tragedy, but he wishes he had had a father to help him deal with “racial struggles” and other issues.

Another family friend of the Crawfords is Buffalo Police Officer Michael Eason, who lived next door to the family for many years. Eason was asleep in his home when Bobby Crawford was slain.

“I remember that night. Someone from the family came to my door, very frantic,” Eason said. “I ran outside in knee-deep snow, with my handgun and a cordless phone. There was Bobby’s body, half out of the car.”

The Crawfords were – and are – “a really nice family, good people,” Eason said. “This was very disheartening.”

Etsuko Crawford said raising her three children without a father has been a tough challenge. After the murder, her son Kalif asked her every day for three weeks, “Where is Daddy?”

“It really hurt me because he was not aware he would never see him again,” Etsuko said. “From then, I have tried everything to make them smile.”

About a year after the killing, she moved with her kids back to Japan, where she was born. She had an opportunity for a good job as a certified public accountant in Japan, and she wanted to be close to her own family.

She was a college student studying in New York City when she met Crawford, who was then enrolled at New York University, in a Manhattan park in 1985. They began dating and fell in love. Etsuko worked for four years in Tokyo, keeping in touch with Crawford by letters, before she moved back to the United States to be with him in 1989. They married in New York City in 1990.

From the beginning, Etsuko Crawford could see that her husband was a hard worker who loved music and was determined to make a career in the record industry. He started Cipher Recording Studio, where the soul group Tony! Toni! Tone! and other acts recorded.

“At home, Bobby enjoyed playing several instruments such as guitar, base guitar, trumpet, saxophone and flute,” Etsuko recalled, using email to communicate with a News reporter from her current home in Japan. “Bobby was very determined to be a music producer.”

Etsuko worked a day job as an accountant, while her husband took care of the children. Soon after she got home from work, he headed to the studio to spend his night working with musicians.

On the day Shamina was born, Etsuko said, her husband told her, “This is the best thing that has ever happened to me.” She said he loved spending time with his children.

“He was a great father and a husband,” she said. “He loved to read books to them. Helping Shamina with her homework was his job, which he enjoyed very much.”

Etsuko said she has spent the past 21 years telling her children that their father loved them very much and about what a good person he was. But keeping his memory alive is difficult, she said, because to her children, Bobby Crawford is only a man they see in family photographs.

Evans acknowledges that it is difficult to solve a case that is 21 years old, but she noted that other homicide cases much older than the Crawford case have been solved in recent years.

If given the chance, what would Shamina Crawford say to the person or persons who took her father’s life?

“I do not believe that anyone who is capable of such heinous acts would be willing to listen to anything that I would have to say,” she said. “I do not think it would be necessary for me to waste my energy to talk to them directly. I would rather let karma and the justice system do its work.”

Her mother had a different response to the question.

“Life is short and I do not have time to be angry,” she said. “I can only imagine that whoever did this act might have been underprivileged themselves. Maybe growing up in a horrible environment, feeling unloved. I just hope they will not hurt any other people.”

But Etsuko, her son and her daughter said they hope Buffalo police will never stop looking for Crawford’s killer.

Anyone with information – or possible information – about the case is asked to call the Cold Case line at 851-4511, or email tips@bpdny.org. Anonymous calls or texts can be sent to the TIP-CALL line at 847-2255.

Ernest “Bobby” Crawford Jr., a Buffalo native who found success as a music producer in New York City, was shot and killed on Dec. 22, 1995, in his mother's driveway on Glenwood Avenue. (Buffalo News file photo)