Scott Martin, a 12-year veteran with the Buffalo Fire Department, was fired from his job earlier this year because he tested positive for marijuana.

The 37-year-old firefighter who served with the Air Force in Iraq and Afghanistan said he is a certified medical marijuana patient who uses cannabis to treat post-traumatic stress disorder and back pain and that cannabis has greatly improved his health and well-being.

Now he's fighting to get his job back.

On May 5, he filed a lawsuit against the City of Buffalo and the Buffalo Fire Department be reinstated to his position, rank and seniority, receive back pay but most importantly to him, to be reassigned to Truck 14, 1st Platoon.

"He's been terminated wrongfully because the collective bargaining agreement hasn't been updated," said Martin's New York City-based attorney, David C. Holland, who specializes in laws related to cannabis. Medical marijuana has been legal in New York State since 2014 under the Compassionate Care Act, Holland pointed out. "They are seven years behind."

Martin said that medical marijuana helps him in many ways.

After graduating from Depew High School, Martin joined the Air Force and trained as a firefighter and emergency medical technician. He was deployed to Iraq and then later to Afghanistan.

"At Firebase Salerno, we were subjected to regular rocket and other terrorist attacks. To say that these attacks were frightening is to grossly understate the physical and emotional toll those frequent incursions cause me and my fellow service members," Martin's affidavit said, referring to Afghanistan.

In 2009, he joined the Buffalo Fire Department and was eventually assigned to 1st Platoon of Truck 14, located on Bailey Avenue, where Martin grew up as a child and around the corner from where he went to church.

Martin said he suffered multiple injuries from falls and flying debris through his work as a firefighter. "This comes with the territory of doing what you love, even if it comes as an emotional and physical cost," Martin wrote.

And as an EMT, he often tended to people injured in gruesome ways, from automobile accidents to shootings.

Those experiences left him with post-traumatic stress disorder, which affected his ability to sleep and caused him to be withdrawn.

To treat his back pain, Martin said doctors prescribed him medication like the opioid OxyContin and later shots of Tramadol into his lower spine. But he didn't like how those drugs made him feel. "It made me feel like I was tweaking out all the time," he said in a phone interview.

He sought treatment from a doctor who recommended medical marijuana. Martin said cannabis, which he takes using a vape pen and also in capsules, has greatly improved his well-being. He knows there are a lot of misconceptions about medical marijuana.

"People think you have to do it all the time. You don't. I do it before I go to bed. It metabolizes and then I'm not high from it," Martin told The Buffalo News. "I don't need to be high when I'm at work. I'm focused when I'm at work."

He said cannabis treats his pain better than opioids, which he said is far more addictive. Also, he pointed out that medical marijuana is not covered by insurance. "It actually, literally saves them money," Martin said about him using marijuana instead of opioids.

According to the lawsuit, Martin was told he needed to submit to a random drug test. When he showed up on Dec. 15 for the test, he revealed that he would test positive and that he is a certified medical marijuana patient. A week later, he got a letter informing his he was suspended without pay and had to seek substance abuse treatment.

Martin did. When Martin was tested again on Feb. 5, the urine sample tested positive for marijuana metabolites again, because he continued to use medical marijuana. Then he was fired based on the union's collective bargaining agreement.

That agreement was entered into in 1984 and updated in 2011, but hasn't been updated since medical marijuana was legalized in the state in 2014, Martin's attorney said.

Martin's girlfriend and another friend have raised more than $13,000 through GoFundMe to help pay his legal fees.

Martin hopes that his case will prod the city to adapt to new attitudes.

"The City of Buffalo, it's so outdated," Martin said. "The Fire Department uses carbon paper still. You know: press hard and get five copies. ... They just don't want to get with the times."

"President Biden should take the initiative and issue an executive order reclassifying cannabis or stating that state marijuana laws should supersede federal regulations if the two are in conflict." 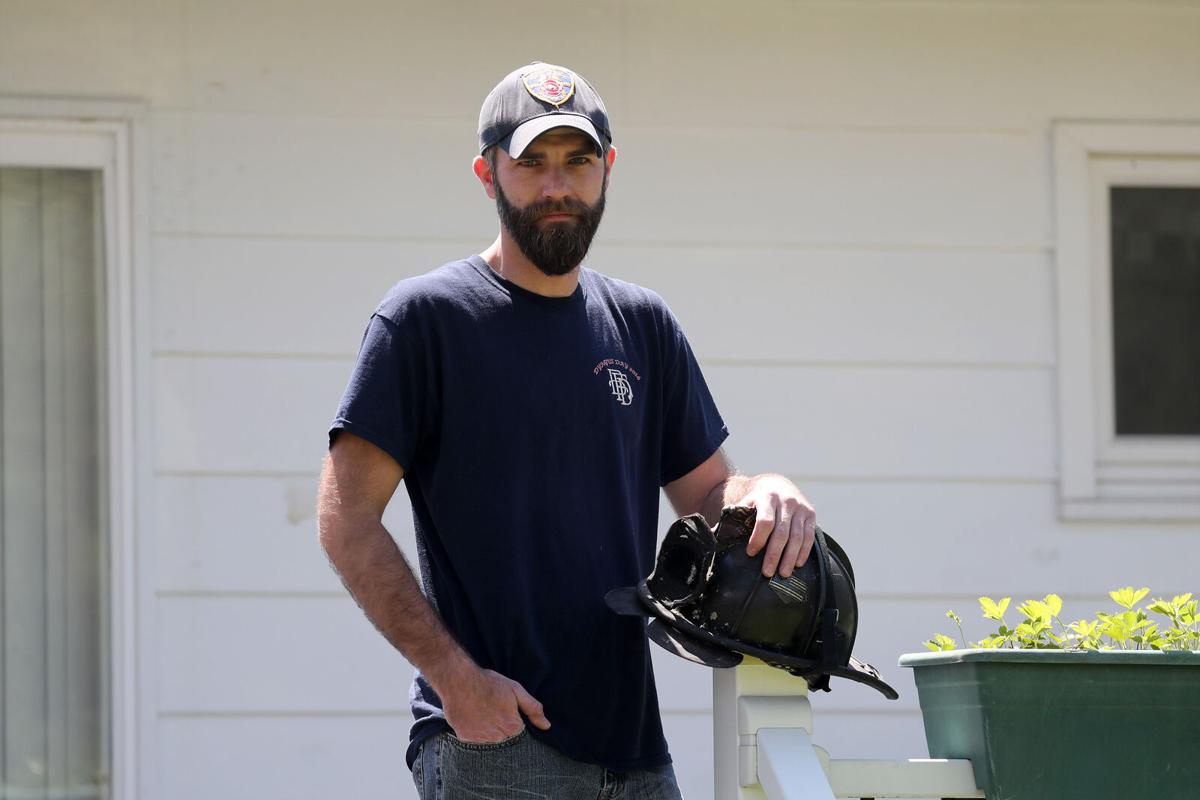 Scott Martin at his home in West Seneca on Saturday, May 8, 2021. Martin was fired from the Buffalo Fire Department earlier this year after testing positive for marijuana. Martin says he is a certified medical marijuana license holder who uses cannabis to treat his PTSD and back pain. He filed a lawsuit May 5 to get his job back.

Scott Martin before he was fired from his job as a Buffalo firefighter.