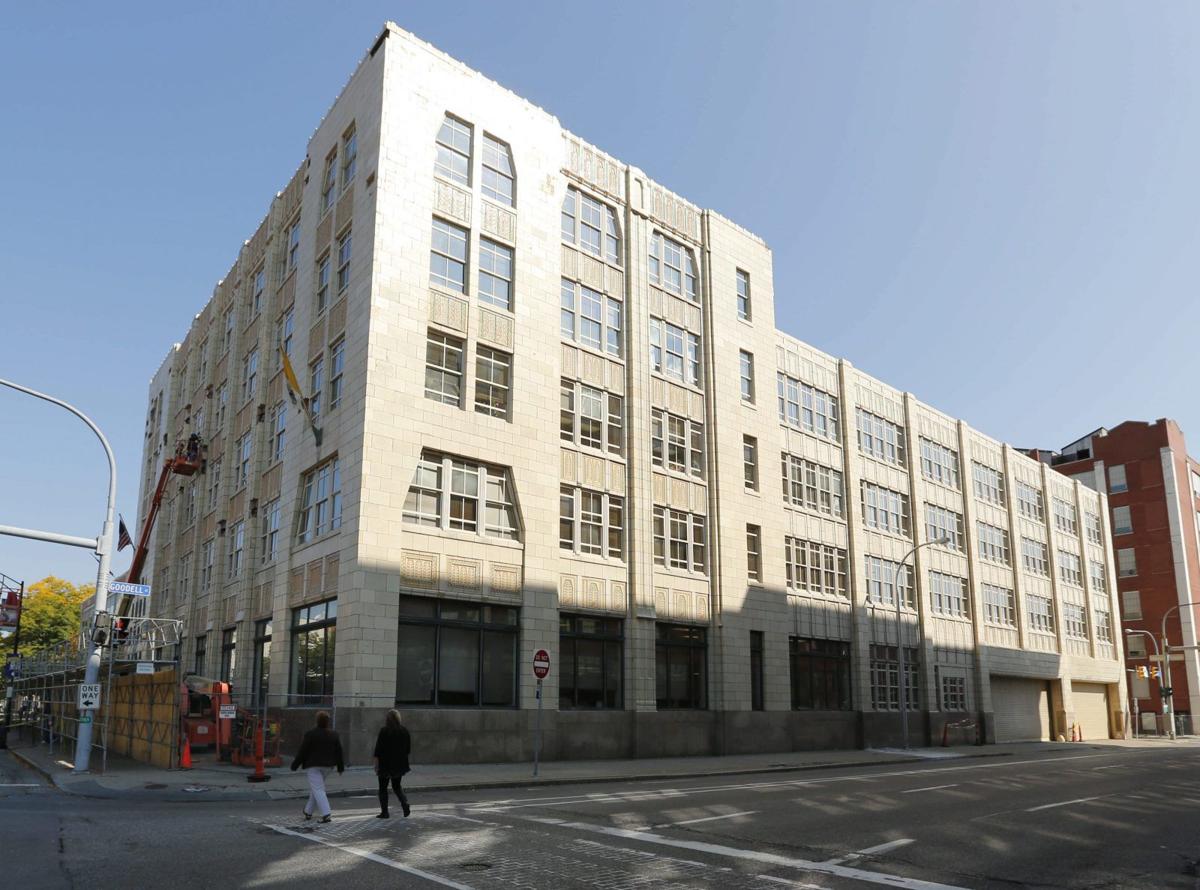 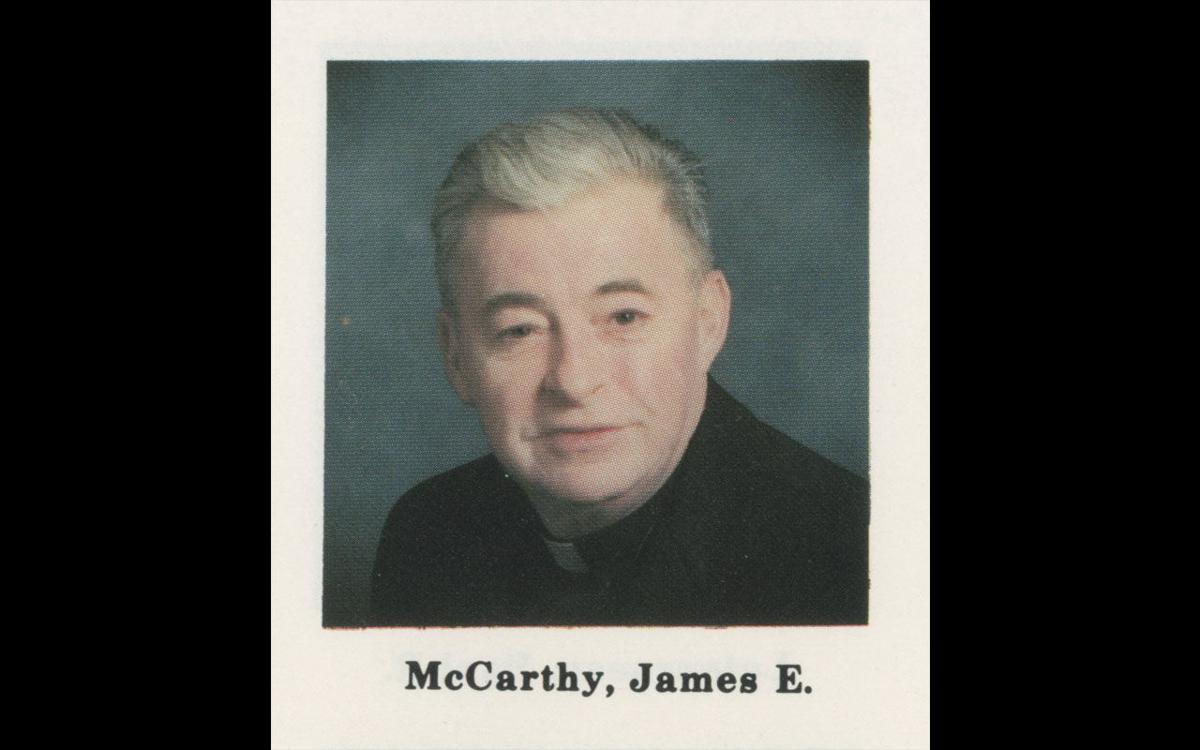 The late Rev. James E. McCarthy is one of 107 Buffalo Diocese priests who have been accused in Child Victims Act lawsuits of sexually abusing children. (Buffalo Diocese's 1983 Priests' Pictorial Directory)

Richard Watroba grew tired of waiting for leaders of the Buffalo Diocese to acknowledge they had protected the Rev. James E. McCarthy.

He decided to force the issue earlier this month, filing a lawsuit that accuses McCarthy of sexually abusing him, beginning in 1973 when he was a 10-year-old altar boy. The suit claims the diocese hid McCarthy’s alleged abuses.

Just three months into a yearlong window under the Child Victims Act that allows childhood victims of sexual abuse to file lawsuits even in old cases, Watroba is among 213 plaintiffs that have accused 107 Catholic priests in claims against the Buffalo Diocese. In addition, 24 plaintiffs have accused five nuns, six Catholic school lay teachers or administrators and one choir director of sex abuse in lawsuits since the opening of the window on Aug. 14.

The abuses were alleged to have happened at 90 different parishes and 11 Catholic high schools across seven counties in Western New York.

The Buffalo Diocese is named as a defendant in 221 cases, three-quarters of all the CVA cases filed in Western New York courts. The Buffalo Diocese continues to be the most sued entity in the state under the Child Victims Act, outpacing the much more populous Archdiocese of New York City and the Diocese of Brooklyn. Plaintiffs still have more than eight months remaining to file lawsuits over previously time-barred abuses.

So far, 45 Buffalo area priests have been accused in multiple lawsuits, with nine priests accounting for a third of all the Catholic clergy cases filed against the diocese, according to an analysis by The Buffalo News. Sixty-two priests were identified in single lawsuits. One lawsuit accused an unidentified priest.

The News analysis of the diocese cases also found:

Why so many suits?

If the pace of filings over the first three months of the Child Victims Act window holds through the remainder of the window period, the Buffalo Diocese could end up with more lawsuits than any diocese previously. Prior to New York’s window legislation, the Archdiocese of Los Angeles was likely the most heavily sued diocese or archdiocese, when California opened a window for child sex abuse survivors in 2003. The Los Angeles Archdiocese paid $720 million in 2006 and 2007 to settle lawsuits from 554 victims involving alleged abuse by 228 priests, brothers, lay teachers and other church employees, according to bishopaccountability.org, a website that tracks the abuse scandal.

Spokeswoman Kathy Spangler said the Buffalo Diocese is facing more Child Victims Act lawsuits than larger Catholic dioceses in New York because it settled fewer clergy abuse claims through its voluntary compensation program than some of the others did.

For example, the Diocese of Brooklyn paid more than $90 million to approximately 500 victims through its Independent Reconciliation and Compensation Program, she said. None of those nearly 500 people could file lawsuits.

In comparison, the Buffalo Diocese paid $17.5 million to settle claims from 107 victims through its IRCP program, she noted.

In court papers answering an insurance company’s attempt to not pay claims for abuse cases in the Buffalo Diocese, a diocese attorney said “additional such claims may be filed” that could “threaten the diocese with large, potentially catastrophic judgments and settlements, not to mention the enormous costs of defending itself.”

The attorney, Randall D. White, also argued in court papers that the Continental Insurance Co. was obligated to pay “in full” for any diocese expenses in defending itself against the lawsuits.

Marci A. Hamilton, a University of Pennsylvania law professor and chief executive officer of Child USA, a nonprofit organization that advocates for better child protection laws, said the amount of publicity around the Buffalo Diocese over the past 18 months has contributed to the large number of lawsuits.

“The more publicity there is, the more likely it is the victims know, and many of these victims are going to be scattered throughout the United States. And Buffalo was treated to even national coverage and so it’s just more likely that victims will come forward with that kind of increased coverage,” said Hamilton. “If you think about it, there’s been more publicity about perpetrators in Buffalo than New York City.”

The abuse scandal in Buffalo also took off in 2018 on the heels of a Pennsylvania grand jury report that provided a devastating account of clergy abuses and cover-up in the Catholic diocese of that state, she said.

“That just brought more public sentiment to the victims, which made it easier for them to come forward,” she said.

The Buffalo Diocese also may be facing more suits because its IRCP program offered some settlements that lawyers working on behalf of clients determined “were unacceptable,” said Hamilton.

Seventeen people rejected the Buffalo Diocese's settlement offers, and the diocese also turned away 135 people who applied for compensation.

Hamilton cited a Centers for Disease Control and Prevention study called the Adverse Childhood Experiences Survey, which found that child abuse victims incur an extra $211,000 in costs over the course of their lifetimes, due to psychological and medical problems and lost opportunity.

“What that tells you is settlement offers that are under $200,000 are likely not to be fair,” she said.

Watroba’s lawsuit is the first time McCarthy’s name has been linked publicly with a child sex abuse allegation, but Watroba said he believes the diocese knew that McCarthy preyed on children and did nothing to protect him.

Watroba was an altar boy when he alleges McCarthy began abusing him in 1973. He said the abuse started in the basement of St. Stephen Church on Elk Street, where McCarthy was pastor. Watroba said it continued for three years until he moved in 1976 to Cheektowaga, away from St. Stephen. McCarthy is deceased.

Watroba said the abuse affected him throughout his life. He ran away from his parents and lived in a home for boys and then with another family that took him in, he said. He didn’t learn to read until he was in the ninth grade.

Watroba said he couldn’t even get himself to watch his daughter make her first Holy Communion at Our Lady of Victory Basilica in Lackawanna in 2001.

“I sat in my Corvette out in the parking lot,” he said. “I just won’t go in a church ever again."

Watroba said he’s tried for years to put the abuse behind him. Until now, he had confided only in his lawyer, his ex-wife and his mother about what happened.

Watroba moved from Buffalo to Shreveport, La., nine years ago. His anger about the abuse came rushing back when he saw national television news coverage of the abuse scandal in the Buffalo Diocese.

Attorney Daniel Chiacchia, who represents Watroba, said many of his clients who were sexually abused as children are haunted by it even decades later.

“It’s been gnawing at them all these years and now with all the publicity about these lawsuits, it gnaws at them even more,” said Chiacchia. “Some of them feel like they want to expose these people and expose the church for what they let happen.”

The late Rev. James E. McCarthy is one of 107 Buffalo Diocese priests who have been accused in Child Victims Act lawsuits of sexually abusing children. (Buffalo Diocese's 1983 Priests' Pictorial Directory) 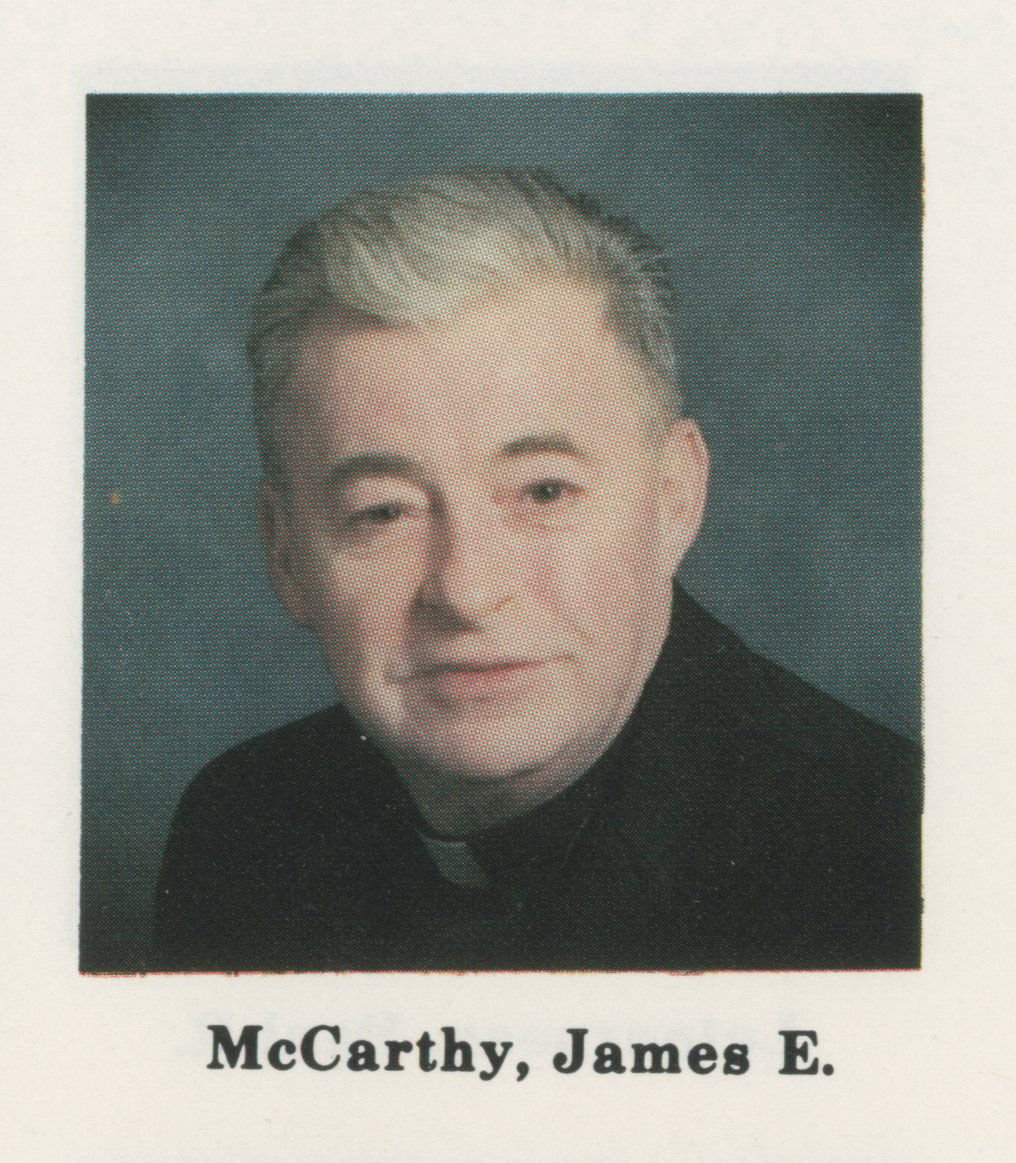