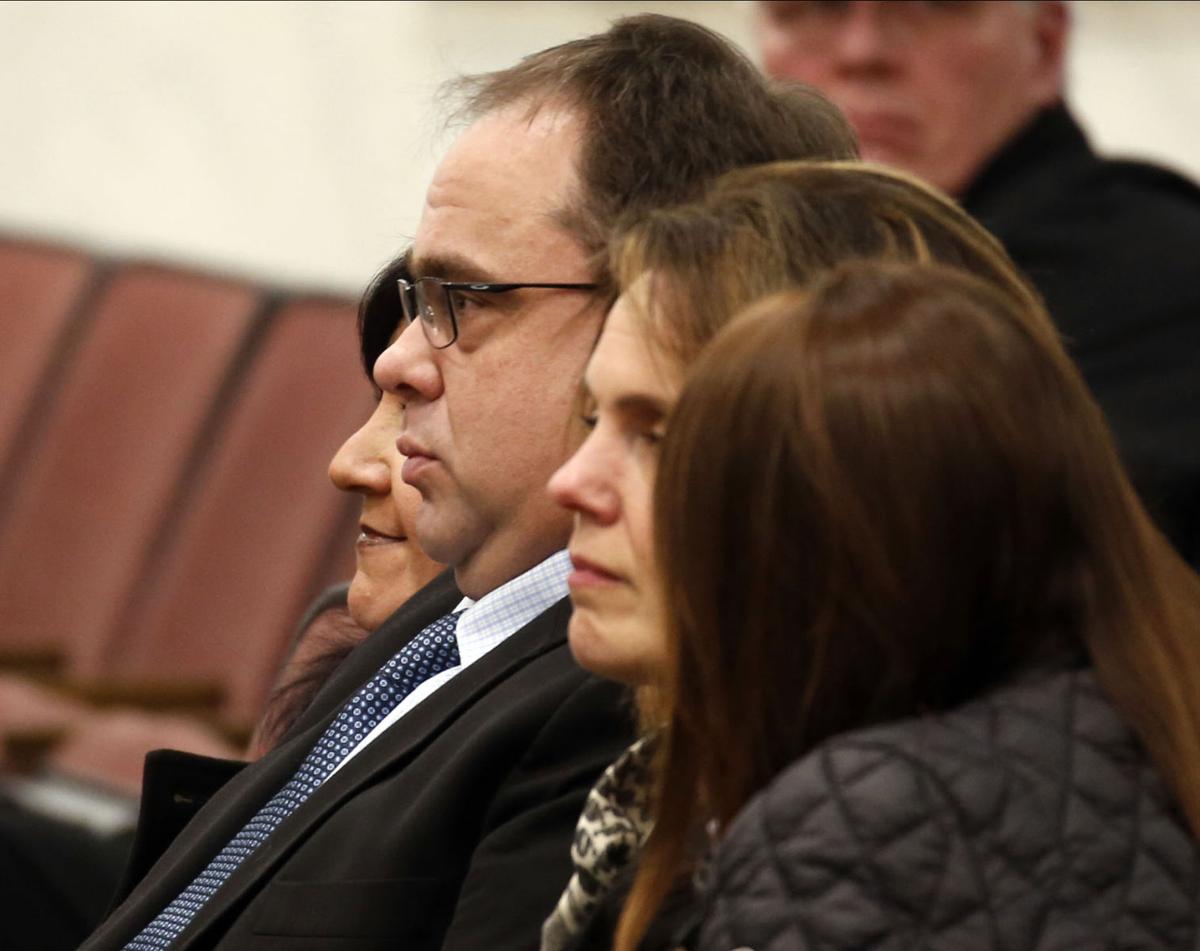 Kenneth Achtyl sits with loved ones at his sentencing at Orchard Park Town Court on Thursday, Jan. 23, 2020. 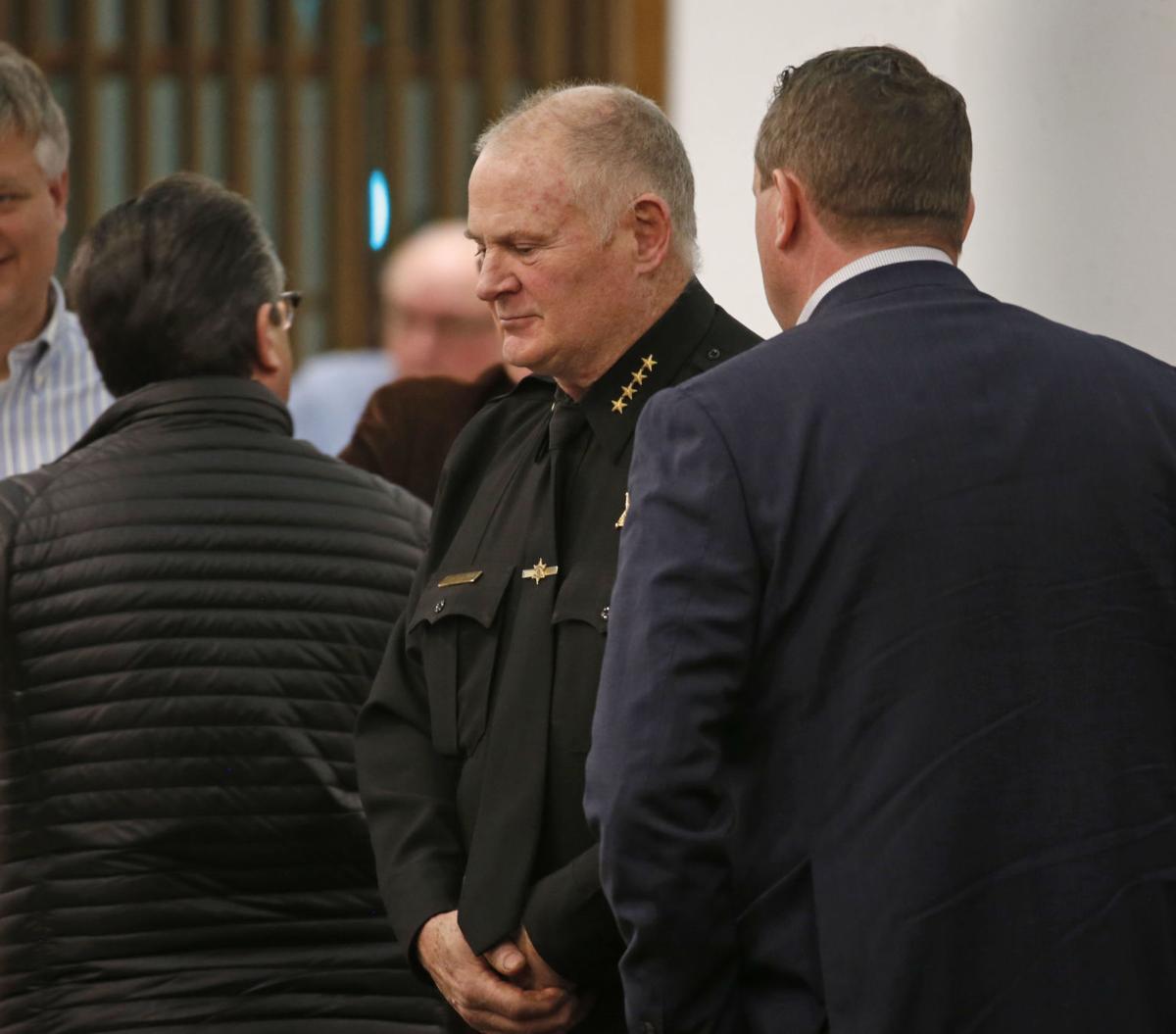 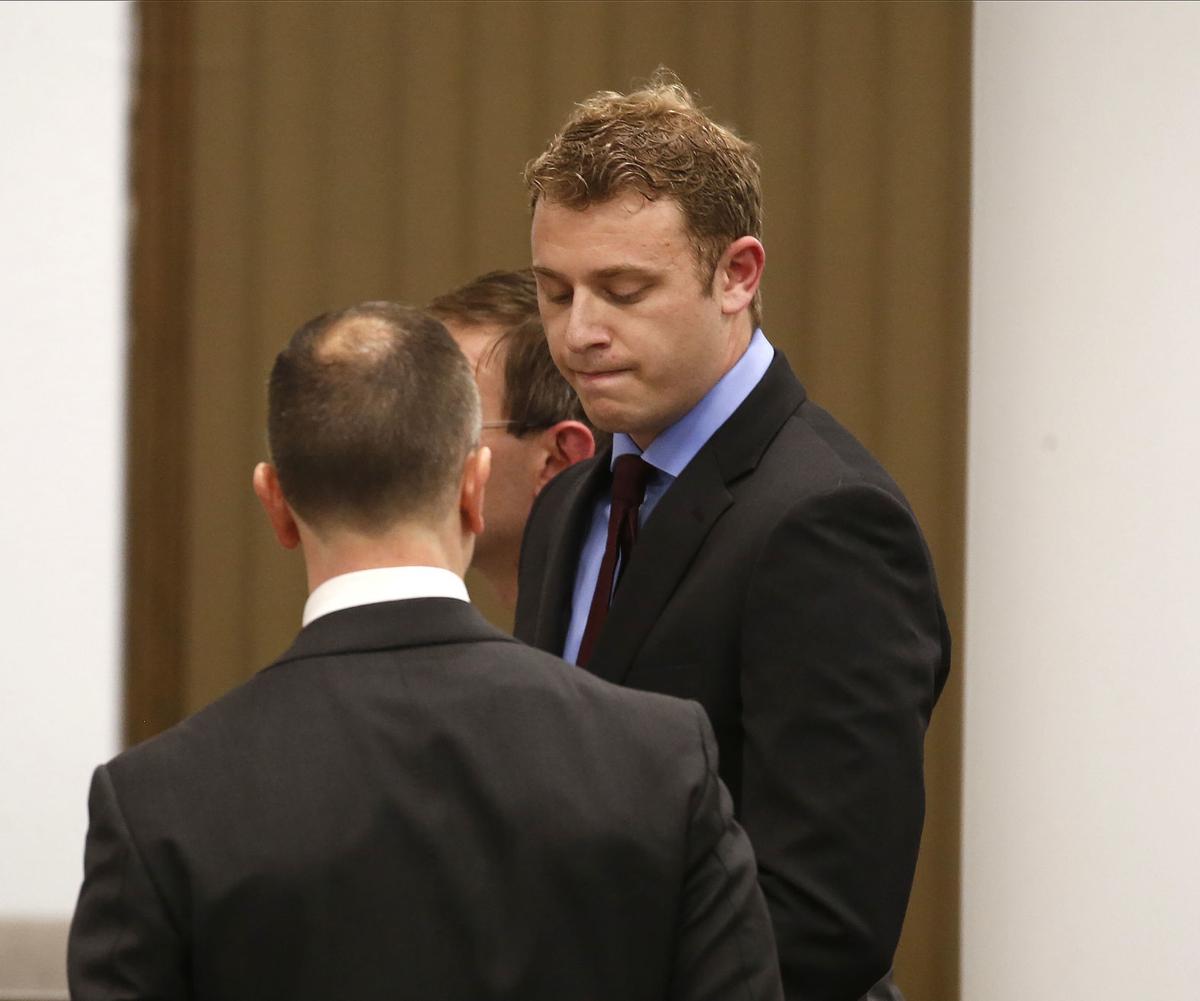 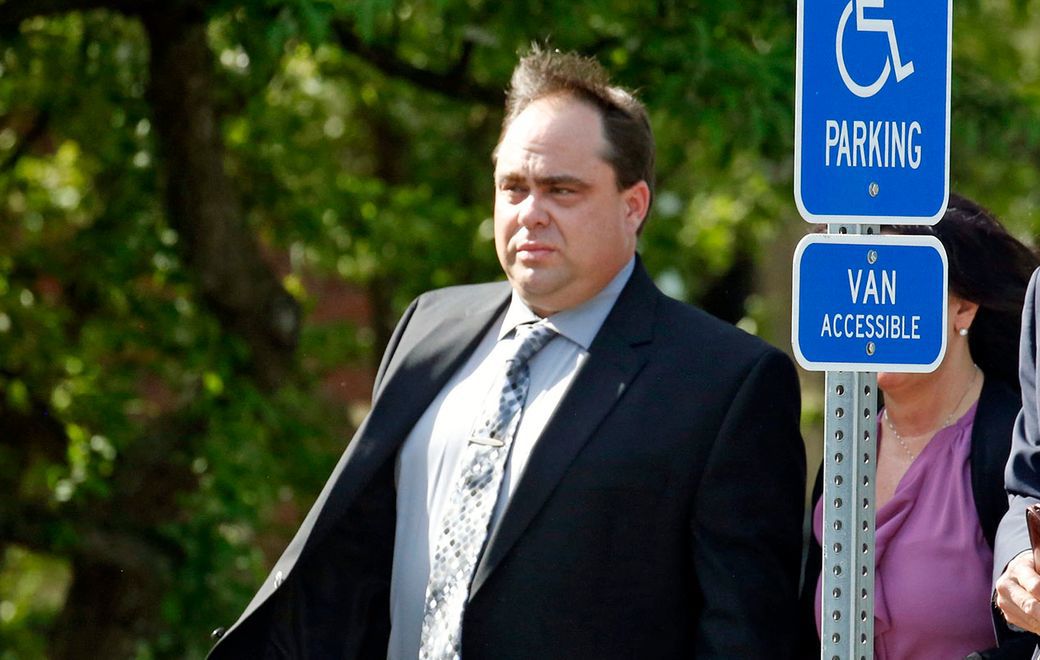 Kenneth P. Achtyl, a former Erie County Sheriff's deputy shown here shortly before his arraignment on criminal charges, could have been sentenced to two years in prison for brutalizing a Bills fan in December 2017. (Robert Kirkham/News file photo)

A former Erie County Sheriff's deputy was sentenced late Thursday to 150 hours of community service for brutalizing a fan outside a Buffalo Bills game in December 2017.

The sentence, a conditional discharge that includes no probation and no jail time, was announced by Judge Jorge S. de Rosas, who presided over a week-long trial that led to the conviction of Kenneth P. Achtyl in September.

The judge also fined Achtyl $750 – $250 for each of the three charges for which he was found guilty – and said he must perform the community service for an approved nonprofit within nine months' time.

He also must pay standard court costs levied on defendants convicted of a crime.

"This was a truly sad case before me," de Rosas said. "It's made our community law enforcement and Mr. Achtyl look pretty bad...

"There are no winners here," he added.

Achtyl did not testify during the trial and did not speak on his own behalf Thursday. He's a defendant in a civil rights lawsuit that has grown from the episode.

A six-member jury in the Town of Orchard Park, the home of the Bills, convicted Achtyl of reckless assault, falsifying business records and official misconduct. Jurors agreed he had assaulted the fan, Nicholas Belsito, with his police baton and then fabricated the narrative on an official document.

Achtyl broke Belsito's nose and gave him a concussion after the 25-year-old student at the University at Buffalo swore at the deputy in the rowdy scene outside the stadium. Achtyl arrested Belsito though New York's highest court has ruled that swearing at a police officer is not, in itself, a crime.

Belsito, when asked to speak Thursday, said he had never been in legal trouble before he encountered Achtyl. He went on to say that because he had spent a night in jail, Achtyl should serve some jail time, too.

Achtyl has yet to show remorse for what he did and the injuries he inflicted, Belsito said.

Prosecutors agree. They had wanted jail time, or at least probation, for the former deputy, whose resignation was announced shortly after the guilty verdicts.

Reached after the sentence was announced, District Attorney John J. Flynn said neither Achtyl nor his defense team has "acknowledged the severity of what happened here."

Belsito said it well, according to Flynn, when he noted that he was thrown in jail for a night yet Achtyl will not know what that was like.

"At the very least, he should get probation," Flynn said of Achtyl.

The judge, however, did not fully accept Belsito's behavior on that day outside New Era Field more than two years ago. De Rosas said that just because a citizen has a right to swear at an officer does not mean they should swear at an officer.

The attack, on Dec. 3, 2017, was captured on cellphone video and on a fellow deputy's body camera. Erie County prosecutors, after seeing the body camera video, dropped charges against Belsito.

The Buffalo News posted the video in late 2018, it went viral, and prosecutors charged Achtyl.

Prosecutors said Achtyl, 47, could have been sentenced to up to two years in prison on the misdemeanors, though such a stiff sentence is rare for a defendant with no criminal record. In a sentencing memorandum, Achtyl's defense lawyer had sought community service with no jail time and no probation, similar to what the county Probation Department recommended.

Several deputies and Achtyl's former boss, Sheriff Timothy B. Howard, wrote letters to the judge in recent months urging him to go easy on Achtyl, because he had distinguished himself at times in his almost 20 years with the Sheriff's Office.

"I ask for your judicious consideration of a man, a hero, no less," Howard wrote, "whose career was spent endeavoring to do what is right and honorable for the safety of those citizens whom he aspired to dutifully serve."

Unlike the deputies, Howard placed his letter to the judge on official Sheriff’s Office letterhead. He attended nearly every day of the trial in uniform, positioned so jurors would have to pass by him as they entered and exited the courtroom. He attended Achtyl's sentencing Thursday in uniform as well. He likened the experience of sitting through the trial and sentencing to sitting through a eulogy at a funeral.

Howard, too, is a defendant in the civil rights lawsuit filed by attorneys for Belsito.

Matthew Spina: Five stories that touched a nerve in 2020

As the nation reeled from the killing of George Floyd at the hands of police in Minneapolis, Minn., The News continued to highlight the often …

The Editorial Board: Draft report on Sheriff’s Office lays out a path toward improved professionalism

If the 16 years that Timothy Howard has occupied the Erie County Sheriff’s Office has demonstrated anything, it is that taxpayers can’t count …

The Editorial Board: Chauvin acted like an occupier when communities need public servants

"He deserves every day of the 40-year prison term to which he could be sentenced," writes The News' Editorial Board.

Achtyl tells lawyers sheriff was in his corner; Howard disagrees with verdict against convicted deputy

Depositions given by Erie County Sheriff Timothy Howard – who looms large over this year’s sheriff’s race – and former deputy Kenneth Achtyl shed light on their thoughts about what happened during the incident that led to the charges against Achtyl, and in the courtroom.

Kenneth Achtyl sits with loved ones at his sentencing at Orchard Park Town Court on Thursday, Jan. 23, 2020.

Kenneth P. Achtyl, a former Erie County Sheriff's deputy shown here shortly before his arraignment on criminal charges, could have been sentenced to two years in prison for brutalizing a Bills fan in December 2017. (Robert Kirkham/News file photo)