Colleen Lamie said she was sitting in her bedroom Tuesday afternoon when she heard a disturbing sound behind her house in the Town of Elba – a series of "whoops" and "clicks," then a loud explosion, all within a few seconds.

"I thought I could feel the vibration of the boom," she said.

It was a Mercy Flight helicopter. It crashed during a training exercise at about 1 p.m. in a field off Norton Road, killing Mercy Flight pilot James E. Sauer, 60, of Churchville, and Stewart M. Dietrick, 60, of Prosper, Texas, a Bell Helicopter employee/pilot. They were pronounced dead at the scene and transported to the Monroe County Medical Examiner's office.

The helicopter had taken off from the Genesee County Airport about four miles away, where Mercy Flight bases some of its aircraft. In a statement, Mercy Flight said the accident occurred during its annual Bell Helicopter factory training. Sauer, a retired New York State Police pilot, began working with Mercy Flight in October 2020.

"It goes without saying that our attention needs to be focused on the families of those lost and on our own employees as we deal with this unspeakable tragedy," Mercy Flight president Margaret Ferrentino said in a statement. "This is a very dark day for the Mercy Flight family, we are so grateful for the expressions of love, concern and support expressed by many."

The National Transportation Safety Board and Federal Aviation Administration are working with state police to determine the cause of the crash north of the intersection of Norton and Edgerton roads, close to Route 262.

State Police Major Eugene Staniszewski said the helicopter appeared to have struck power lines as it descended, but that authorities don't believe that was the cause of the crash.

In a statement, Bell Helicopter said it was unable to answer questions or share information at this time, out of respect for the privacy of the families involved.

"All of us at Bell are extremely saddened to hear the news of the accident that resulted in the loss of two pilots, including one of our Bell teammates," Bell spokesperson Lindsey Hughes said.

Sauer, a veteran of the war in Afghanistan, retired as New York Army National Guard chief warrant officer 4 in 2020 after 40 years in the military, according to an article on the National Guard website. He joined the Army in 1979, graduated from Warrant Officer Flight School in 1987 as a UH-60 Black Hawk pilot and was a medical evacuation pilot in South Korea.

He later was assigned to Fort Drum as an assault helicopter pilot with the 10th Mountain Division. He had been deployed to Somalia, the Horn of Africa and Latin and South America, according to the National Guard.

Sauer left active duty in 1993 and entered the New York Army National Guard in 1995. Celebrating his final military flight in 2020 were his wife, Marie, daughter Laura Ames, four grandchildren and other family members, according to the National Guard article, which said Sauer's son, Josh, was serving in the Air Force Reserve’s 914th Air Refueling Wing in Niagara Falls.

Mercy Flight provides airlifts and other transportation for medical emergencies in the Western New York area. Following the crash, operations were temporarily suspended "in order to allow time for our employees to process the event, and to ensure the complete safe mechanical operation of our other helicopters pending a preliminary accident team investigation," said Scott Wooton, Mercy Flight's executive vice president.

The Mercy Flight Communications Center remained operational and was referring any requests to other area resources, he added.

This was the second Mercy Flight helicopter involved in a crash in Genesee County in the last seven months.

Another Mercy Flight helicopter was involved in an accident on Oct. 6, according to documents released by the NTSB on Jan. 4. In that incident, a Bell 429 helicopter contacted the ground just north of the Genesee County Airport at 9:10 p.m. and bounced 60 feet, landing upright in a field, the NTSB report said.

In the October incident, which resulted in no serious injuries, an ambulance flight crew was returning after dropping a patient off at Strong Memorial Hospital in Rochester at 9 p.m. In the 10-minute flight back to Batavia, the pilot lost visual reference to the ground in fog at a height of 200 feet as he attempted to land on the runway, the documents state.

The helicopter in the October crash sustained "substantial damage," the NTSB said. Ferrentino said that helicopter is being replaced, and Mercy Flight expects delivery of a new aircraft in mid-to-late summer.

Steve Richenberg, a retired contractor, said he was working in his yard when he saw the helicopter dive straight down. He said he'd been watching it most of the day. After the crash, he immediately drove to the crash site to offer help.

The crash happened right by the shoulder of the road, Richenberg said, but the tail of the helicopter ended up in the field several yards away. He did not see any smoke when the helicopter first went down, but he later saw firefighters using an extinguisher for a small fire.

Dawn and Paul Hough, who live about a half-mile from the crash site, said they saw a helicopter flying around their home on Edgerton Road on Tuesday morning, well before the 1 p.m. crash. Paul Hough said these kinds of training exercises are fairly common, and that planes have landed in open fields here before.

“It’s the country. Not much happens around here," said Dawn Hough, who said she and her husband have been Elba residents for 46 years.

Dawn Hough said she was at Walmart in Batavia when Lamie, her friend, called and asked if she had heard the crash.

Lamie told Dawn Hough: “It sounded like an atomic bomb.”

"This makes me sick to my stomach," Dawn Hough said. "I could see the image in my head.”

Condolences poured in from the Western New York emergency responder and hospital community, all of whom worked closely with Mercy Flight crews.

"Our thoughts and prayers are with the entire Mercy Flight team and their loved ones," said a statement from Kaleida Health.

The Mercy Flight crash on Tuesday followed two high-profile aviation incidents that killed four Western New Yorkers in the last three years. On Jan. 8, 2020, Buffalo businessman Mark Croce and his passenger, Michael Capriotto, were killed when Croce's helicopter broke apart midair and crashed in central Pennsylvania. On Oct. 2, 2020, prominent personal injury attorney Stephen Barnes and his niece Elizabeth died in a small plane crash in Pembroke on the western edge of Genesee County. Barnes was piloting the aircraft from New Hampshire to Buffalo.

The Mercy Flight helicopter that crashed Tuesday in a field in rural Genesee County, killing two seasoned pilots, was traveling at an altitude of about 2,000 feet when, according to witnesses, there was a "large boom and they saw the helicopter fall from the sky."

Mercy Flight pilot James E. Sauer and Stewart M. Dietrick of Prosper, Texas, an employee and pilot with Bell Helicopter, were killed Monday when their Mercy Flight helicopter on an annual factory training crashed in a field in Elba.

Mercy Flight WNY has announced it will resume regular operations at 7 a.m. Saturday for the first time since the helicopter crash that claimed the lives of Mercy Flight pilot James E. Sauer and Bell Flight pilot Stewart M. Dietrick on April 26.

A preliminary report released last week into the crash that killed pilot James E. Sauer and Stewart M. Dietrick, a Bell helicopter flight instructor, provides a sense of how such a split could have happened.

At least six hikers killed during glacier collapse in Italy 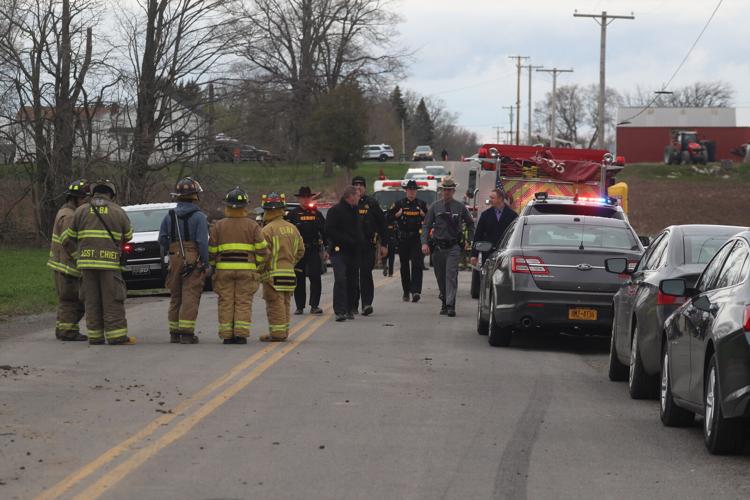 First responders gather at the scene just north of 7269 Norton Road in Elba, Tuesday, April 26, 2022. The NTSB will be investigating the crash. 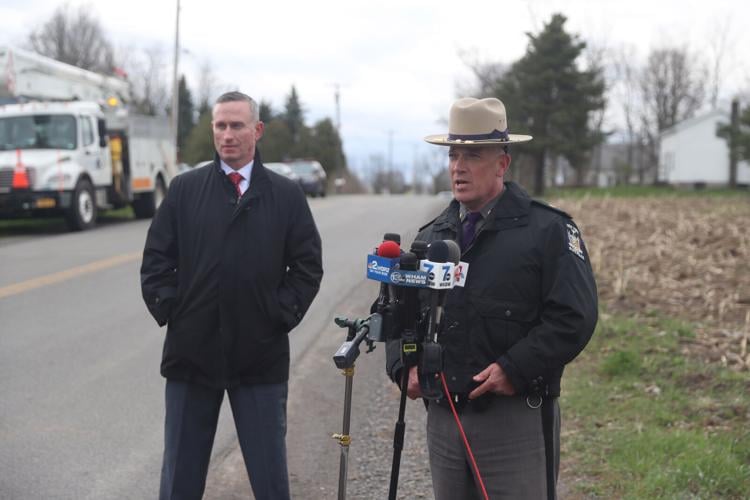 The helicopter was on a reported training flight and flew out of Batavia Airport, said State Police Major Eugene Staniszewski, right, at a press briefing.