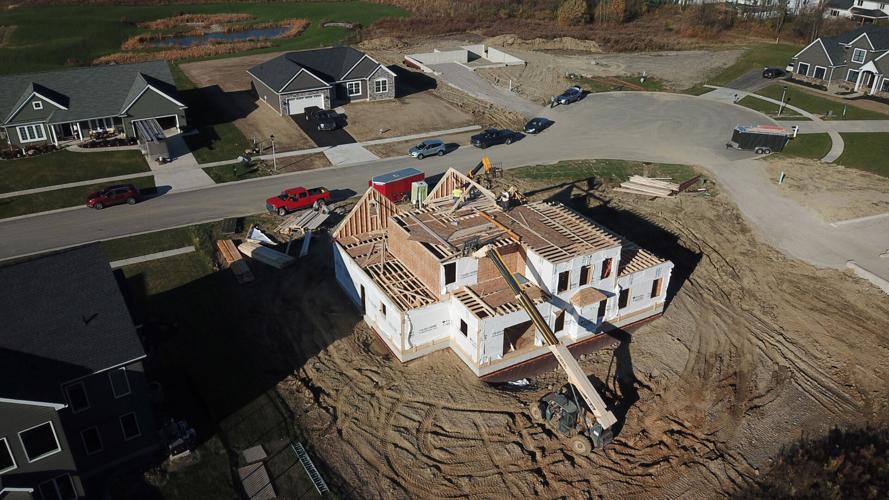 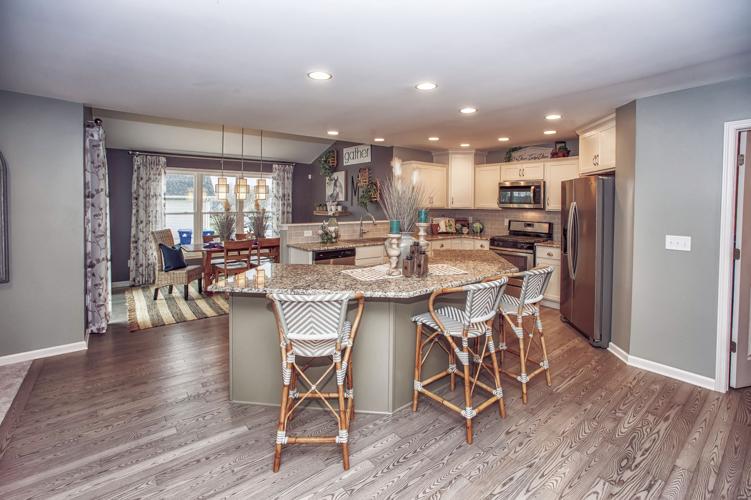 A kitchen/sunroom layout in a Marrano Homes model.

When New York state shut down homebuilding along with the rest of the economy in March, Marrano Homes found itself unable to build or showcase its model homes.

Even when the rules were relaxed three months later, people were slow to resume normal activity.

Yet the company managed to sell 60 homes in two and a half months, even with no advertising.

"The market didn’t slow down from a sales point of view. It surprised us, really surprised us," Marrano said. "To sell over 60 homes was phenomenal."

Overall sales are now 15% ahead of last year – itself a record year, with 204 homes sold overall, for $75 million in volume.

"Our construction suffered, because they shut the production down, but our sales stayed strong all the way through," Marrano said.

It wasn't just Marrano, either. Data from the U.S. Census Bureau on housing permits shows that the value of single-family home construction in the Buffalo-Cheektowaga metropolitan area since January was up nearly 3% through September to $223.9 million.

That’s despite the number of new permits dropping slightly, by 4%, to 687. Construction of doubles was up even more, by over 40%, with 14 houses valued at $2.9 million.

Despite the pause on construction activity, their inability to highlight their new home offerings in person, and continued fears and caution about the coronavirus, homebuilders in Western New York found that their business not only held up but actually boomed under the difficult circumstances.

Low mortgage rates helped, and so did the intense competition for the record-low number of existing homes that were for sale throughout most of this year.

"Covid actually turned into being an asset versus being a deterrent," said Phil Nanula, owner and CEO of Essex Homes of WNY, who said his business is up about 20% from last year.

Buyers snapped up new houses as quickly as the builders put them up, and also signed contracts for future construction – in some cases without ever seeing anything in person. Instead, those buyers relied on three-dimensional virtual tours and made their own material or design choices online.

"We’re busy as all get-out," said David Capretto, founder and owner of Forbes-Capretto Homes, whose sales are up 60%. "I’m surprised. I don’t know what to expect as far as how long, but so far it seems like next year is going to be quite a bit of what we have this year."

The combination of factors and subsequent strong demand are even giving homebuilders confidence not only to continue with existing projects but to unveil and begin new ones.

Forbes-Capretto, for example, just announced plans for its New England Estates community on Grand Island, where it will build 13 single-family private homes on a cul de sac in a wooded area off Ransom Road, near the Niagara River and Gun Creek. The homebuilder is developing new home designs with both one- and two-story floor plans.

And it's planning three additional developments next year, including another one on Grand Island and one in Lancaster. Capretto said the firm has benefited from the acquisition of additional land, but added that the online traffic through the firm's website "has been up crazy numbers," while both leads and conversion rates are up.

The surge in activity appears to be driven by a combination of factors, including the continued shortage of options in the existing home market, as well as the growing comfort among younger buyers in newer technology that allowed them to do everything virtually.

Homebuilders like Marrano now offer not only the virtual tours but also rendering apps that allow a buyer to select a floor plan, choose bathroom and kitchen layouts, select colors and materials, and then see how the finished version would look on their screen.

"You want to see what that handle looks like on the cabinet? It'll zoom right in," Manns said.

Other customers still wanted to see the model, and were able to do so – with masks and social distancing – once the initial restrictions were lifted. But the limitations didn't hold them back.

"They know they’re making selections, and they know that everything that’s going in there is brand new," Marrano said.

Buyers also have more incentive to look at the new home market now – as long as they can afford it. That's because the number of homes for sale in the regular market is so low that buyers are struggling to find a house, or they're being continually outbid in stressful battles with other buyers.

So rather than beat their heads against a brick wall in the intense competition for existing homes, they're choosing instead to build new, where they don't have to compete and they have more control over what their next house will look like.

"You could be looking at very few options in the existing home market. What’s the alternative?" Nanula said. "They’re able to work in a more calmer environment that they’re not worried about."

It's also easier under Covid conditions, because there's no worry about visiting an occupied home. That was a big problem in the spring, when open houses and home tours of existing homes were barred or restricted as part of social distancing efforts.

Nanula said he had 11 spec homes completed at the start of the Covid pandemic, and all are gone, aside from a model.

"All my other inventory is sold," he said. "I didn’t perceive that, but the results of what was created by the limitations of the existing home market turned into a positive as it related to any standing inventory that was unsold."

Finally, the continued low interest rates have made building a new home much more affordable for many people who never considered it before, especially if they're selling their previous home for far more than they were asking. That gives them a leg up from the get-go, while keeping the monthly payments within reach.

"The selling price doesn't mean anything. It all comes down to the monthly payment," Marrano said. "They’re making a lot of money on their existing home, so it’s a good time for them to move on, and the gap has closed between new and existing in terms of price."

At Kaleida Health, the number of Covid-19 patients has been slowly increasing for more than a week, from 150 on Nov. 27 to 185 on Saturday.

Six projects to watch in Amherst as housing development continues

Several residential projects are under various stages of review in Amherst, demonstrating the continuing demand for more housing in Buffalo's largest suburb.

Since early April, the price of lumber in North America has more than doubled.

The $50 million development features five ranch plans, ranging in size from 1,600 to over 3,000 square feet.

The Patios at Essex Ridge development will start with 36 homes in its first phase, which is now underway on the 50-acre site.

Marrano Homes is moving up the ranks of the nation’s largest homebuilders, just a year after breaking into the top 200. The subsidiary of Marrano/Marc Equity Corp. rose 18 spots since last year – to 181 – on Builder Magazine’s annual list, which is ranked by home closings from the previous year. According to the data reported by the

Construction activity starts back up – slowly

The sounds of excavators, backhoes, hammers and drills are coming back, and no one could be happier than homebuilder Phil Nanula. He’s been lobbying heavily to get his company’s projects back on track. After almost two months with little to no work being done on houses – many already sold to buyers – Nanula’s crews were already ramping up

Western New York homebuilders are lobbying state leaders to clarify – and possibly modify – the shutdown restrictions on the industry, freeing them to complete houses they’ve started or even declaring new home construction as essential. Local builders say they are frustrated by incomplete directions from Albany and inconsistent interpretations from local officials, which hinder their ability to complete 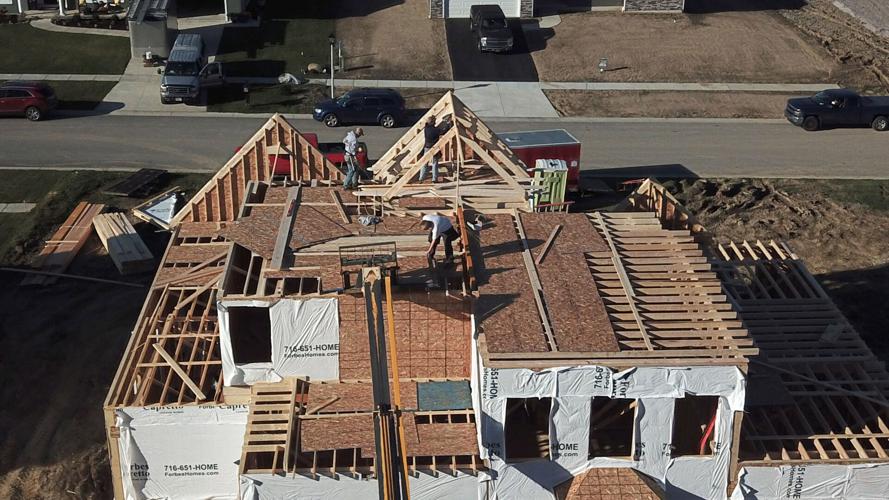 New home construction in this development by Forbes-Capretto Homes, pictured on Nov. 10, 2020. 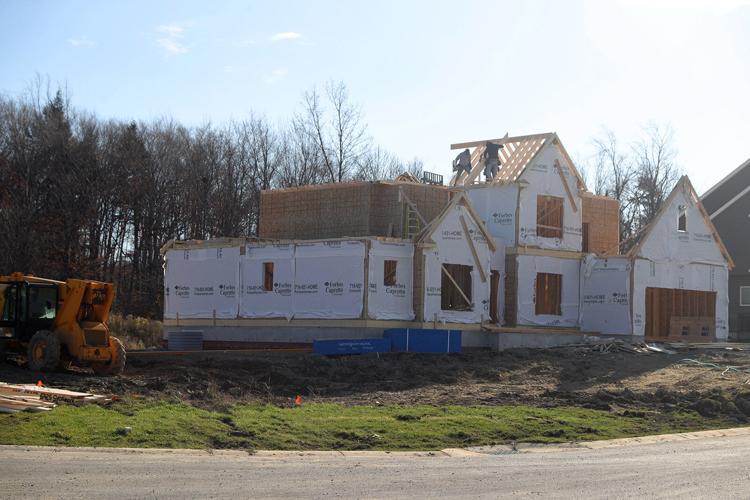 A kitchen/sunroom layout in a Marrano Homes model.