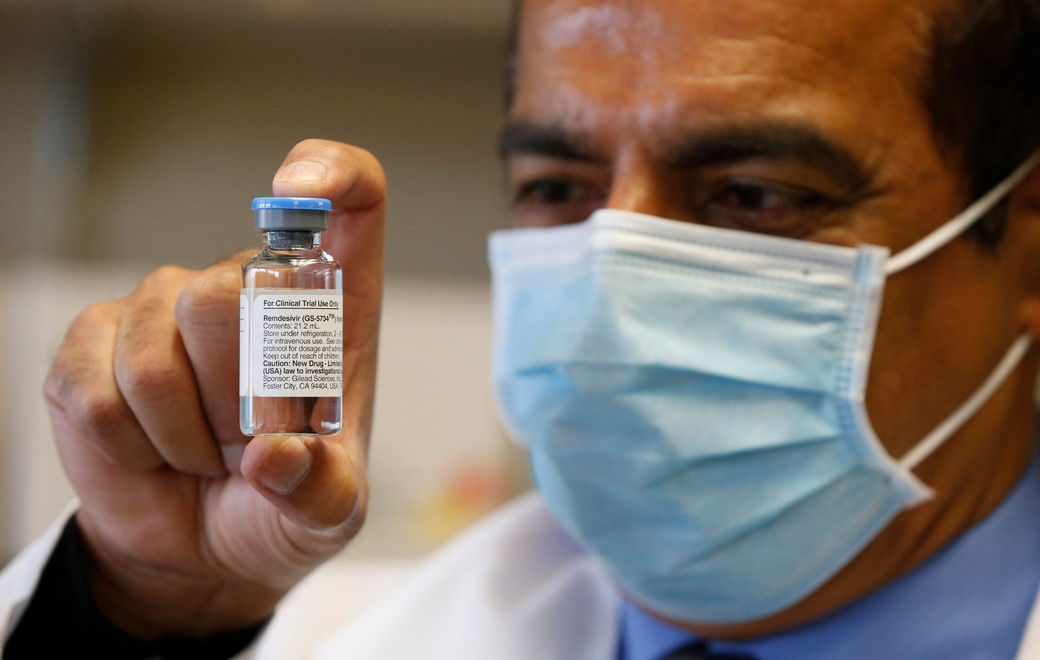 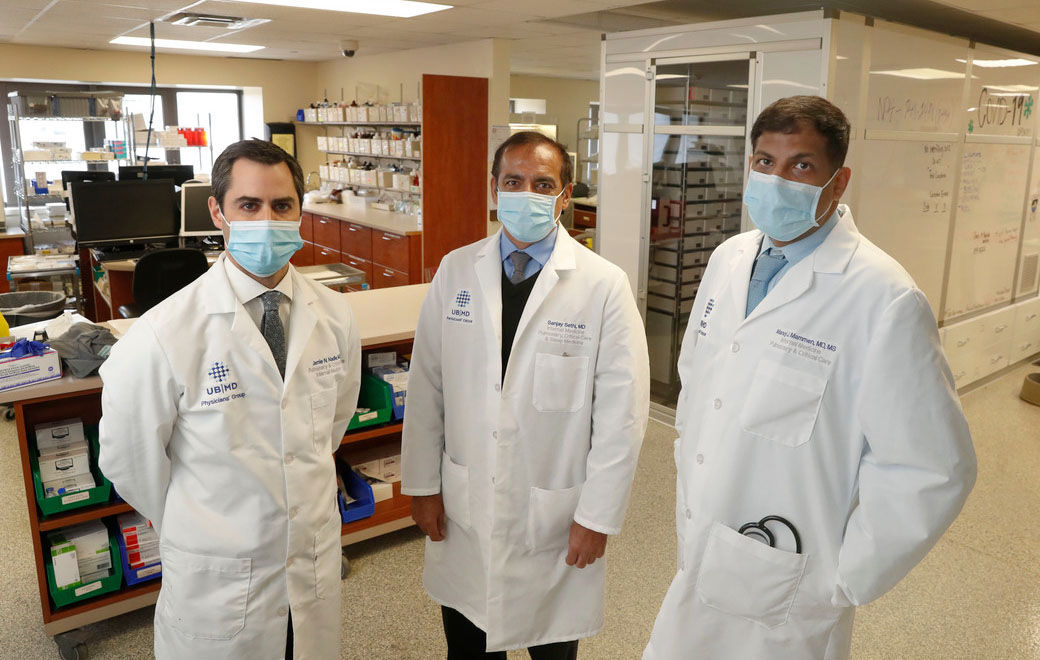 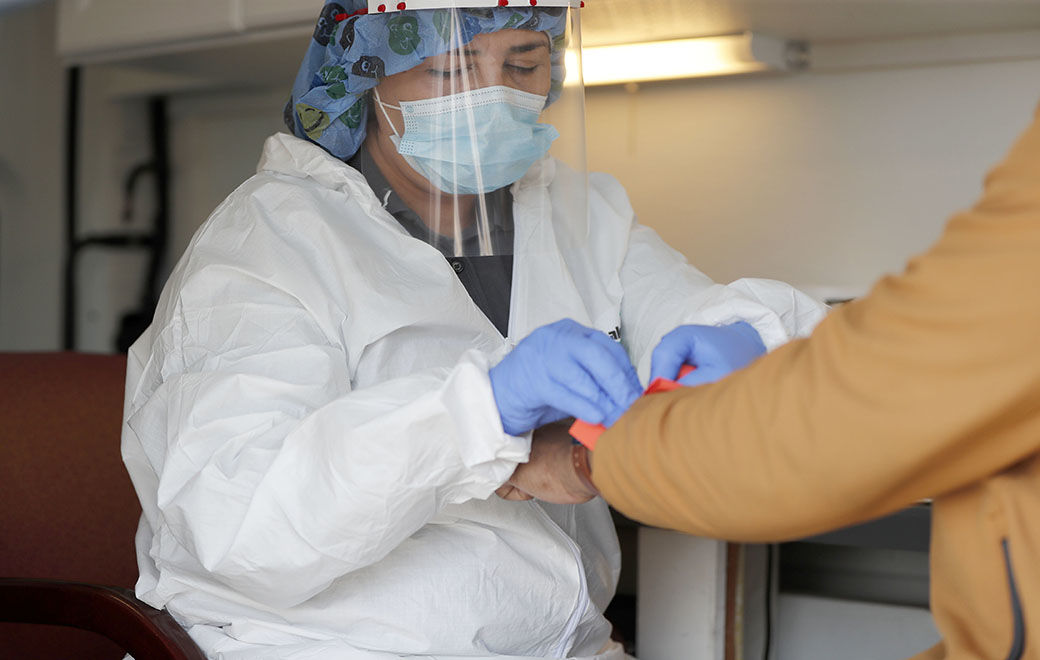 Medical Assistant Debbie Roman takes a blood sample from Darryl Gaiter, screening him for novel coronavirus antibodies. Those who test positive and meet other criteria will be able to donate antibodies to be used to treat patients struggling with Covid-19, the disease the virus causes. (Mark Mulville/Buffalo News)

Front-line health workers caring for Covid-19 patients are providing traditional flu-fighting weapons as they continue to explore how to bring down fevers, prevent blood clots and find the sweet spot for immune responses that will slow the disease without the need of ventilators.

A clinical trial with the anti-inflammatory drug sarilumab continues; the first doses of the antiviral drug remdesivir have arrived; and dozens of people have received antibody treatments from the blood of those who tested positive for the novel coronavirus and no longer have symptoms.

“The most important thing is to get people into studies right now because that's a way we learn and potentially give some benefit,” said Dr. Sanjay Sethi, director of the Clinical Research Office with the University at Buffalo.

Sethi is among researchers who temper their optimism with caution as experimental treatments proceed hopefully toward a vaccine and cure. Intensive measures can help even some of the most critically ill recover but there remains no proven treatment, and roughly 2,000 Americans continue to die daily from Covid-19.

“Families should not expect miracles that people will turn around right away because we're using these treatments on very sick people,” Sethi said. “Even if they stop the virus or stop the (inflammatory) storm, there's a lot of damage and a lot of healing that needs to happen before patients get better.”

Here is the latest look at the most immediate treatments.

The FDA warned doctors last month not to prescribe the antimalarial drugs hydroxychloroquine and chloroquine to patients with Covid-19 symptoms who haven’t been hospitalized. It also quickly fell out of favor in acute care settings because physicians and patients didn’t see a benefit. The drug carries potential side effects that include fever, trouble breathing, hallucinations, gastrointestinal distress and, of most concern, heart arrhythmias.

“In general, it's been disappointing,” Sethi said. “I've had offers for trials. I said no, based on the information we had and talking to the physicians who said it's not heading in the right direction.”

Many patients with Covid-19 symptoms admitted weeks ago to regional hospitals were given hydroxychloroquine shortly after they arrived but treatment protocols now generally involve supportive care provided to all patients with respiratory symptoms.

That includes adding oxygen and pain management, fluids and proper nutrition to address dehydration, medications to lower fever and blood thinners to reduce the risk of blood clots.

It is one of several injectable treatments designed to tamp down a flurry of immune system proteins called cytokines that attack healthy cells. The worst of these cytokine storms can lead to respiratory and kidney failure, and low blood pressure.

The experimental treatment works by shutting down the inflammatory cascade and helping bring the immune response into better balance, said Dr. Jamie Nadler, principal investigator for the clinical trial at Buffalo General and Millard Fillmore Suburban. “Once that inflammatory cascade is suppressed,” he said, “it gives the body the opportunity to heal.”

Dr. Igor Puzanov, director of the Early Phase Clinical Trials Program and chief of melanoma services at Roswell Park, co-leads the trial in the region. He works with similar drugs used to treat cancer patients. Drug-maker Regeneron is preparing to double the initial 400 patients in a worldwide multicenter study in which 20% of patients receive a placebo.

Buffalo General enrolled its first patient on March 28; 19 patients have since been enrolled at the four participating hospitals.

Earlier phases of the trial showed patients with mild symptoms and those in organ failure got no benefit from sarilumab but those in between did. The latest trial has updated the dosage and number of times it is given as it focuses on improving the sweet spot for effectiveness, Puzanov said.

Only Regeneron knows which patients receive the placebo, so treating physicians can’t be certain how the drug is working but are generally seeing improvement in most patients who are part of the trial, said Dr. Brian Murray, chief medical officer at ECMC.

Puzanov leads the study with Gene Morse, distinguished University at Buffalo pharmacy professor, co-director of the SUNY Global Health Institute and director of the UB Center for Integrated Global Biomedical Sciences. Both sit in weekly on virtual meetings of Covid-19 researchers from around the world and have tied UB and Roswell Park into a new regional research consortium they expect to tackle other projects going forward.

“We are already working on the next-in-line trials together,” Puzanov said.

Remdesivir is an antiviral infusion treatment designed to weaken and kill Ebola by reducing its “viral load” – or disease burden.

The infusion treatment appeared promising enough with Covid-19 as it entered the final stage of clinical trials that drugmaker Gilead Sciences announced this week that it will donate its remaining 140,000 courses of treatment to the federal government, which will parcel it out in U.S. communities with the greatest need.

Demand has grown as it shows effectiveness, creating a worrisome supply chain akin to those health providers already endure with test kits and personal protective equipment.

UB-affiliated Kaleida Health physicians applied to participate in the trial but instead were put into an “expanded access program” designed to broaden availability.

Remdesivir is a complex, hard-to-make drug. It took a year to prepare the doses now available. Gilead hopes to cut the manufacturing process in half.

“If we do get treatments that, even though they're not miraculous, shorten the course, hospitals and ICUs will be able to put patients in the right direction and get them through treatment much quicker,” Sethi said. “That reduces the load on the hospital system.”

Regional hospitals last month began treating patients with antibodies of those sickened by the new coronavirus who tested positive and recovered.

The work is part of the National Covid-19 Convalescent Plasma Project, which the Mayo Clinic coordinates this across the country.

The treatment generally is well tolerated with few side effects, said Mammen, who coordinates the program for Kaleida Health and, along with Nadler and ECMC's Murray, has a position with the UB Jacobs School of Medicine and Biomedical Sciences.

During three weeks that ended Tuesday, more than 25 patients were provided plasma containing antibodies intravenously in ICUs at Buffalo General and Millard Fillmore Suburban, he said. Four died, four others were moved to regular hospital rooms, five were discharged and others got it more recently.

“We don't want to make it seem like it's a panacea,” Mammen said. “It's still just one tool in our arsenal.”

Twenty more patients are scheduled for treatment, Sethi said, including those whose bloodwork shows they’re at higher risk for serious illness.

More than 150 people signed up to donate within a few days of the announcement April 10 that the program would launch in the region. The Donor Center at Roswell Park Comprehensive Cancer Center has since collected more than 110 units of convalescent plasma from those qualified to provide antibodies, said Maria Turner, Donor Center marketing and communications director.

Murray said ECMC has treated 24 patients, only five of whom were on ventilators. It’s hard to make precise conclusions about effectiveness because other measures are used to treat Covid-19 and infusing antibodies is a “safety trial” that doesn’t include a control group not receiving treatment, he said.

“We can say we have not detected any problems with the treatment,” Murray said.

Those who have recovered must wait at least two weeks before they can be considered as donors.

They should fill out the online screening form here or at forms.roswellpark.org/covid-plasma-donation. Those seeking more information can call 888-4845 or 800-767-9355.

Nadler and others said one or a combination of treatments could be used going forward with patients who test positive with the novel coronavirus, depending on study findings.

Roswell Park and UB researchers also close in on more clinical treatment studies with an aim to include a growing number of hospitals.

As the supply chain for promising treatments improves, doctors and researchers also would like the treatments used earlier in the disease process. That's how flu treatments work best.

“The earlier you try to put everything in balance, the better because otherwise there are too many things to correct,” Mammen said. “It's like putting your finger in the dike. If there’s one leak, that's great, but if there's 15 or 20, you don't have enough fingers to stop the flood.”

Some good news about Covid-19: Hospital death rates are down considerably

“We do a heck of a lot better with Covid now than we did four months ago, five months ago,” said Dr. Joseph Izzo, chief of medicine at Erie County Medical Center.

Western New Yorkers recently exposed to a household member who tests positive with Covid-19 can be treated with a promising drug.

Lab-produced monoclonal antibodies mimic those created by the immune system to bolster a defense against infectious invaders.

A group of scientists on the Buffalo Niagara Medical Campus has spent the last year using biology and X-ray technology to help fellow researchers foil the novel coronavirus.

Medical Assistant Debbie Roman takes a blood sample from Darryl Gaiter, screening him for novel coronavirus antibodies. Those who test positive and meet other criteria will be able to donate antibodies to be used to treat patients struggling with Covid-19, the disease the virus causes. (Mark Mulville/Buffalo News)