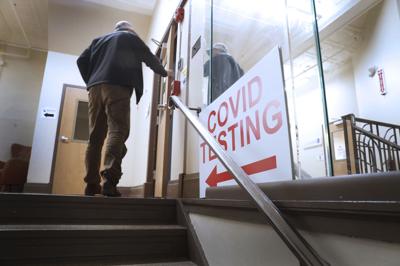 The vaccine loosened Covid-19’s grip, and people are moving about freely and unmasked. But what’s with that blip in new cases spotted in Western New York?

“The virus is not gone,” said Dr. Peter Winkelstein, executive director of the Institute for Healthcare Informatics at the University at Buffalo, who suspects that the highly contagious Delta variant and the easing of Covid-19 restrictions are two factors at play.

“The virus, unfortunately, will probably never be gone. It is probably with us for the rest of human history,” he said.

The recent blip involves small numbers – around a half-dozen more new cases a day over 10 days in the five-county Western New York region. But the uptick spoiled the steady plummet in new cases seen during the pandemic’s second summer.

The seven-day average of new cases in Western New York had trended downward, since the surge in vaccinations, to a low of six on June 24. But the next day the seven-day average reversed itself and more than doubled over the next several days to 13 on Friday, Saturday and Sunday. There was a quick snap upward in new cases statewide, too.

Much of the increase in Western New York can be traced to its most populous county. Erie County identified 69 new cases of the virus between June 28 and Sunday, an average of almost 10 cases a day.

Another indicator of the pandemic’s future course, the positivity rate, bounced, too. The seven-day average reached 0.48% for Western New York on Sunday. While that’s still very low compared to pre-vaccine days, the regional rate hasn’t been that high since the 0.55% recorded for June 10.

The positivity rate, which measures the percentage of Covid-19 tests that came back positive, has risen statewide as well, to 0.56% on Sunday, a level not seen since June 3.

Winkelstein was among the public health experts who marveled at how quickly vaccinations improved local metrics. But what’s going on now?

“We know the Delta variant is here. We’ve sequenced it, so we know it’s in Western New York,” he said. “And it’s much more contagious, probably twice as contagious, roughly speaking, as the original virus.”

On June 15, Gov. Andrew M. Cuomo lifted many of the remaining restrictions put in place to stem the spread of the virus because the percentage of vaccinated adults reached 70% in New York, an important benchmark.

The lifting of restrictions, Winkelstein said, increased the chance that someone – chiefly the unvaccinated – will pick up the virus, he said.

“The virus is out there, kind of waiting to pounce, if you will,” he said. “With the reduction in restrictions and an increase of a contagious variant, that does mean that people who are susceptible are at increased risk.”

The vaccination rate among the Western New York counties is a mixed bag. State data shows that 70% of Erie County's adult population has received at least one dose. In Niagara County, it’s 65% and in Chautauqua 57.8%.

Cattaraugus County’s vaccination rate is at 51.8%. Allegany’s rate of 44.5% is the lowest among the state's 62 counties and the only county below 50%.

Winkelstein, who said he still wears a mask in indoor public spaces, says he wants to see how the numbers on new cases and the positivity rate move in the days ahead before he gets worried. And he’s not ready to dismiss the possibility that the approach to the July 4 holiday affected the positivity rate by changing the mix of people being tested.

“In another week or two, we will have a much better sense of it,” he said.

Fortunately, he said, there has not been an uptick in the number of people hospitalized with Covid-19.

The case numbers reveal another trend, one far less gloomy. No one in the Western New York region has died from Covid-19 since June 26, a nine-day run.

The Editorial Board: Increase in Covid-19 infections shows the dangers posed by the unvaccinated

The six-county region of Western New York has recently seen an uptick, more than doubling from about six new cases a day to 13 over the holiday weekend.