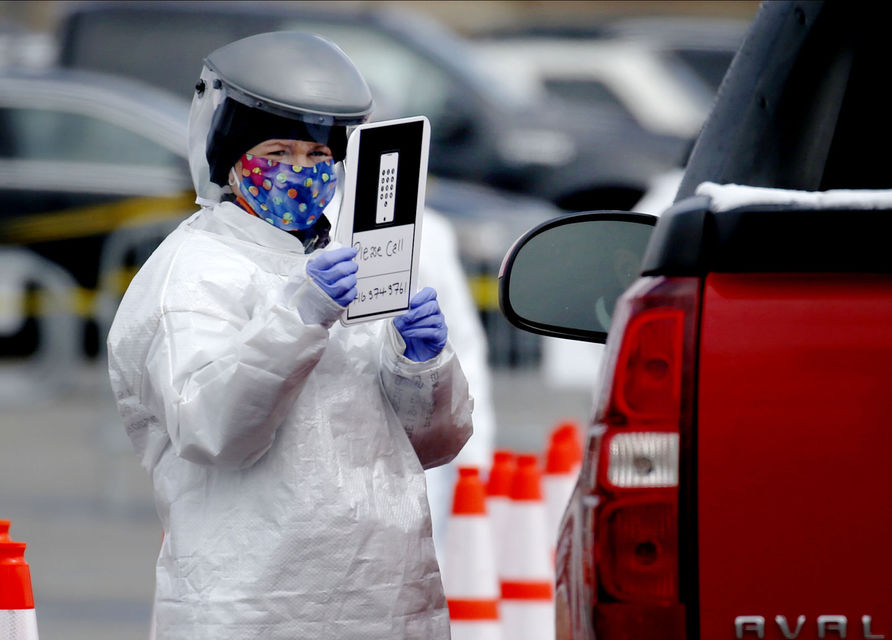 A medical professional communicates with a patient at a Quest Diagnostics Covid-19 drive-thru testing site in a Walmart parking lot in Cheektowaga on Thursday, April 16, 2020. (Robert Kirkham/Buffalo News)

ALBANY – The Buffalo area can expect the caseload of new coronavirus cases to peak, at its earliest, on about May 10, but more likely the plateau will be reached on about June 18, according to a computer science professor’s modeling of the virus' path.

Malik Magdon-Ismail, an expert in “machine learning” technology at Rensselaer Polytechnic Institute in Troy, ran a program at the request of The Buffalo News and found new Covid-19 cases in Erie and Niagara counties will likely track longer than some other areas of the state.

The projection, according Magdon-Ismail, is important because it should help inform government officials and private companies when stay-at-home and social distancing orders can be relaxed in some ways.

If social distancing requirements are eased in the Buffalo area – based on some statewide or New York City assumptions – the researcher and professor said: “That may be a mistake.”

“What is almost certain is you have to use local data in deciding what to do," he said of talk of a statewide or national reopening of the economy.

“It may not be your time," he said of the Buffalo area's reopening compared with others that peak earlier.

Machine learning, a form of artificial intelligence, is used in an ever-growing number of ways in society, from medical fields and gaming to the U.S. Post Office for sorting mail to catching fraud in credit card scams. One startup company, led by prominent Silicon Valley executive Andrew Ng, this week announced a machine learning modeling program that can track movement of people, say in the workplace, to ensure social distancing rules are being followed.

In the case of Magdon-Ismail, the RPI professor on Friday released results of a machine learning model that predicted new Covid cases in the Albany area – which includes Troy, home to RPI – will peak in the second half of May.

The Buffalo News asked Magdon-Ismail to run numbers for Erie and Niagara counties, which he provided late Friday night. The exercise was done on his laptop, and took about an hour for the machine learning model to be run; it used the dates and numbers of positive cases in Western New York and then employed algorithms to consider all the information and then make predictions on when the virus will peak in the region.

Computer modeling is being done by a number of public and private entities across the nation. New York State has tapped modeling experts to help it plan its coronavirus response and there has been a heavy focus by modeling experts on New York City. The University at Buffalo's Institute for Healthcare Informatics has also been working with Erie County health officials, as well as hospitals and insurance companies, on coronavirus modeling measurements to help officials direct health care resources. The UB initiative, the college said this earlier this week, has specifically not been aimed at predicting when the number of cases might peak.

The new RPI effort is seeking to provide information to smaller urban areas outside New York City with information about when the virus might peak, but also includes modeling information of what the Troy college calls the "infectious force" of the pandemic and estimates for asymptomatic infections. The modeling taps into publicly available virus information from the state.

Magdon-Ismail's prediction of a more likely mid-June peak for the virus in the Buffalo area is based on several factors, but a key one: that 75% of residents will remain at home and not go to work and, when they do venture outside to go to the grocery store or pharmacy that they employ serious social distancing protocols.

Whether that number of 75% reflects accurately how many people in the Buffalo area are actually remaining largely at home is unknown. But he said if the number is lower – at a 50% stay-at-home level – then the likely peak will not come until the first week of July.

RPI has a renowned computer science department. Magdon-Ismail, who has a Ph.D. in electrical engineering and a master’s in physics from the California Institute of Technology, came to RPI in 2000.

New Covid cases in New York City are believed to have peaked, after a sharp rise in the beginning of March fueled, in large part, by the population density of the boroughs. In Erie and Niagara counties, the curve was far less sharp than New York City since the first case was confirmed in Erie County on March 17.

An elongated curve in the Buffalo area, compared to the more dramatic spikes seen in New York City, could have a couple effects, said Magdon-Ismail. First, the modeling RPI ran should allow officials in Western New York to better plan for the coming weeks of the disease’s spread. Secondly, a longer though less dramatic rise will put less of a strain on health care resources in Erie and Niagara counties compared with the hospital siege seen in New York City by the large jump in cases before its apparent peak in the past week. Officials have warned the numbers could rise if social distancing rules are relaxed too soon.

The RPI scientist said the data points used to track caseloads in the Buffalo area have been “very noisy” because they’ve tended to go up and down on many days over the past month. Also, it becomes trickier in areas with smaller numbers of positive cases than New York City; about 230,000 people have tested positive in the state, with about half of those coming in the five boroughs of New York City.

Erie County has been home to a number of problems with coronavirus testing, including running out of tests, having a lower testing rate at one point than other urban areas in New York State, and having testing available only to a limited number of people.

Machine learning modeling can use relatively smaller numbers in Buffalo, for instance, and then make some sense of them to provide predictions.

By social distancing, the ferocity of the virus has been controlled, the RPI professor said.

Google's mobility reports, last released on April 11 for Erie County, shows that human activity at transit places – bus stops, train stops – is down 65% from the traditional baseline number for the area. Such information, the RPI professor said, shows that people in the Buffalo area are taking stay-at-home rules seriously.

The modeling run by RPI also factors in the seriousness of the Covid cases in the area, based in part, on who was getting tested. The theory is that tests were performed mostly on people who experienced the virus going from mild to more serious.

As the Buffalo area gets closer to its peak, machine learning tools can be employed again, the RPI researcher said, to help guide local officials about how much to relax social distancing rules. “We can play out that model because the model knows how many have been infected so we can ask the model what happens if we change the (stay-at-home) assumption to 50%. That can help make the ultimate decision whether it’s a good idea to lower the social distancing levels," he said.

The mask mandate is still in effect in schools. Some parents and administrators have had enough

Even though the end of the school year is near, and a return to something resembling normalcy is in sight, the battle over wearing masks has remained a flashpoint.

A medical professional communicates with a patient at a Quest Diagnostics Covid-19 drive-thru testing site in a Walmart parking lot in Cheektowaga on Thursday, April 16, 2020. (Robert Kirkham/Buffalo News)