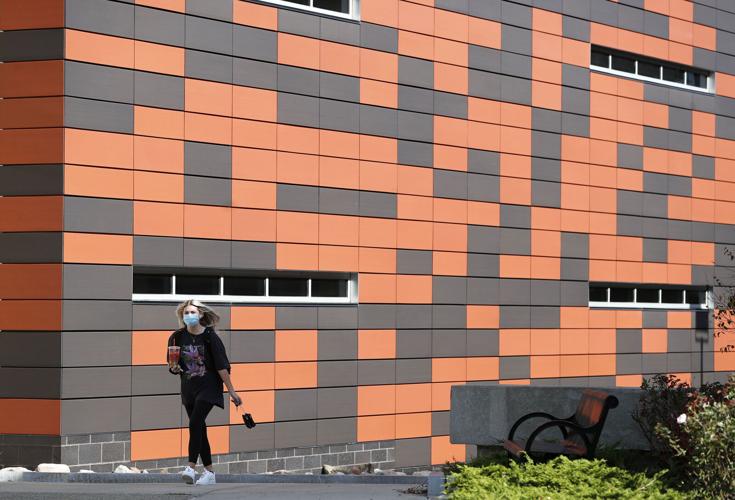 Buffalo State student Alyssa Markowski walks past Caudell Hall on the campus in Buffalo on Wednesday. 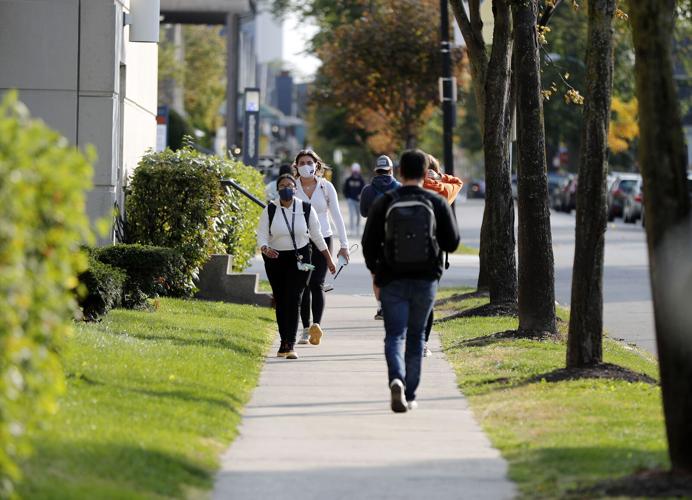 Support this work for $1 a month
Jay Tokasz

Students en masse didn’t drop their studies at Western New York colleges and universities this fall, as many higher education administrators had feared earlier this year.

That’s the good news for the area’s higher education industry.

The bad news is enrollment at most institutions continued to erode, as it has for several years, and steeper declines could be around the corner for many campuses already struggling to fill seats.

Seven out of 10 colleges in the area that provided fall 2020 enrollment numbers to The News lost between 1% and 10% of their student populations from last year, before Covid-19 hit.

But the virus was only part of the reason for the declines. A bigger factor for many schools is that there are fewer people of traditional college age.

Some of the steepest long-term declines are in Buffalo, where Canisius College, once the region’s largest private college, has 45% fewer students today than in 2010 and SUNY Buffalo State is a third smaller than it was a decade ago.

D’Youville College administrators announced in an email to faculty and staff on Monday that they permanently laid off employees who had been on extended furlough since the spring. D’Youville’s enrollment dropped by 10% from fall 2019 to fall 2020.

Buffalo State President Katherine S. Conway-Turner also recently informed faculty and staff that the college has a projected $14.8 million deficit for 2020-21 and will have to cut personnel.

The deficit projection could improve if more federal stimulus aid surfaces, but any increased aid is unlikely to cover the entire gap, Conway-Turner said in an interview with The News.

“It’s going to be a hard year as we work through this over the next few months,” she said. “Some kind of shrinking of the faculty and staff will have to occur, absolutely.”

Overall, year-to-year postsecondary enrollment was down this fall across the nation by 3%, with first-time students accounting for more than two-thirds of the drop, according to the National Student Clearinghouse Research Center.

“There wasn’t a free fall that we had worried about,” said Conway-Turner.

But the college has been shrinking steadily since 2010, and at 8,339 students it is the smallest it has been in more than three decades.

Conway-Turner said the college particularly has struggled in recent years to attract transfer students from community colleges, where enrollment has dropped even more dramatically than at four-year institutions.

“We’ve always had a really strong transfer student population. And now we’ve seen less and less and less,” she said. “There are fewer at the community colleges to go around.”

The State University of New York saw a year-to-year decline of 5.7% in enrollment across the system, which SUNY Provost Tod Laursen described as “far better than what we had projected.”

The long-term trend for enrollment across the SUNY system was mixed. University centers, including the University at Buffalo, grew by a collective 9% over the past decade. UB alone was up by 11% since fall 2010, and university officials said enrollment grew again slightly this fall, to 32,347 students, despite the pandemic.

SUNY officials reported that overall enrollment in the system dropped to 394,567 students in fall 2020 from 471,185 students in fall 2010. Most of the declines were in community colleges and at comprehensive four-year colleges, such as Buffalo State and SUNY Fredonia, which had 29% fewer students enrolled this fall compared with fall 2010.

Fredonia drops 8% in a year

Fredonia President Stephen H. Kolison Jr., hired this past summer, told the College Council at its October meeting that enrollment decline was the biggest challenge facing the college.

“The enrollment issue is job one for the president and the president’s cabinet. This is critical,” he said. “It has a lot of implications for our resources.”

The college saw a drop of more than 20% in students who come from New York City and Long Island, said Cedric B. Howard, vice president for enrollment and student services.

Instead of traveling across the state, most of those students chose to stay home and attend community colleges in the City University of New York system, said Howard.

St. Bonaventure University near Olean was among the few area institutions seeing rising numbers of students in recent years, including being up slightly from fall 2019 to fall 2020.

President Dennis DePerro said he was pleasantly surprised to see so many students return to campus despite the uncertainties of Covid-19. Among students who were slated to continue their undergraduate studies, 86% returned, making it the university’s highest-ever retention rate, said DePerro.

A prevailing demographic tide, however, continues to work against all Western New York’s colleges and universities.

The number of public high school graduates will decrease by 6% between 2012 and 2026 in the Northeast and by 3% in the Midwest, according to projections by the National Center for Education Statistics.

New York State currently has 300,000 fewer students in kindergarten through 12th grade than it did 20 years ago, and the decline is much greater outside of New York City, according to the Manhattan Institute.

“The decrease in the number of high school graduates is a strong indication of why enrollment in Western New York is declining,” said Danielle Ianni, vice president for enrollment management at Canisius. “Students have a lot of different choices as they’re trying to determine their best fit, and it’s resulted in that competitive marketplace.”

Several area colleges and universities draw some students from secondary markets in Massachusetts, Pennsylvania, New York City and Ohio, but college officials cautioned that broadening recruitment efforts requires patience and commitment, and it might not yield immediate results.

“We’re looking at that. But you can’t get all jazzed up that you’re going to just put a flag in the ground in Ohio and everybody’s going to be raving fans. I mean there are good colleges in those areas, too,” said Bob Murphy, executive vice president and dean of admissions at Niagara University.

Next year could be worse

Some college administrators expressed concern that enrollment numbers for next fall could be much worse, because the financial pressures confronting many families haven’t gone away and anxiety over the virus continues.

“You can’t visit schools. September, October, November, our people are out 24/7 into schools, seeing students, seeing college counselors, seeing parents. It’s next to impossible to be able to visit those schools,” said Murphy.

The fall months are usually the first wave of contact with high school seniors, which is critical because “that’s where you create the interest in applications,” Murphy said. “If you don’t have the application and the engagement with those kids now, it’s going to be tough.”

“Clearly this is a serious financial situation for our state and for UB, and we anticipate this financial strain for the foreseeable future,” UB president Satish Tripathi said.

Dr. Dennis DePerro is recovering, according to the university. He tested positive for the virus on Christmas Eve.

D’Youville College’s plan to offer associate degrees is being opposed by the presidents of three other Buffalo-area colleges.

Two finalists will be interviewed for president of ECC

Both candidates will be interviewed on campus and give virtual presentations next week.

Buffalo State student Alyssa Markowski walks past Caudell Hall on the campus in Buffalo on Wednesday.