WASHINGTON – The White House last week introduced an interactive map of the nation's broadband dead zones, and it is enough to make a lot of Western New Yorkers see red.

Neighborhoods with slow internet speeds are shown in that color – and red blotches cover the eastern part of downtown Buffalo and a swath of the city's East Side, the region's Native American reservations and large portions of the Southern Tier.

Those places also show up on a map of places where at least 25% of the households surveyed said they had no internet access. Much of South Buffalo, the East Side and Niagara Falls, along with part of Cheektowaga, show up on that map, too.

And the same areas, along with parts of Wyoming County, appear on a map that shows where no broadband provider reported offering service.

Such is the state of broadband service in Western New York as Congress sets out once again to do something it has promised to do and never done for two decades: close the nation's digital divide.

It is now dubbed the U.S. Innovation and Competition Act.

It is not just Western New York's problem, either. In fact, many politically red Republican states show up much more red on the White House broadband map than the Buffalo area does.

And because the lack of universal broadband access is indeed a national problem laid bare by the Covid-19 pandemic, potential solutions – some bipartisan, even – abound in the nation's capital like never before.

"I'm very optimistic that in the 'Build Back Better' plan we come up with, they'll be enough money to pay to wire everyone," said Senate Majority Leader Charles E. Schumer, a New York Democrat.

Experts and citizen advocates are hopeful, too – while warning that broadband access and its cost are issues that will be difficult to entirely solve.

"There are still huge obstacles," said Janique Curry, a Buffalo community activist who has pushed internet providers to expand their broadband networks.

Analysis: How $1.2B in new federal cash to Buffalo Niagara will be doled out

The local and school aid targeted to the area under President Biden's American Rescue Plan won't come gift-wrapped. It will arrive, instead, tied together with red tape, with strings attached.

Politicians have been talking about boosting broadband access ever since Hillary Clinton did so while barnstorming New York State in pursuit of a Senate seat 21 years ago.

So why hasn't the issue been solved in all that time?

Sen. Kirsten E. Gillibrand, a New York Democrat and Clinton's successor in the Senate, noted that money to expand rural broadband has been included in recent bills setting the nation's farm policy, but that the scope of those efforts has been limited.

"However, we want to make broadband the same as access to water, access to electricity – that it's a human right for all Americans," she said. "And so to do that, we need to invest on a much larger scale, and so this infrastructure bill is that opportunity to do a robust investment in broadband."

That certainly seems to be the case. President Biden's American Jobs Plan would devote an unprecedented $100 billion to building high-speed internet connections to areas that lack them, and even a smaller-scale bipartisan infrastructure effort taking shape in the Senate would set aside $65 billion for broadband.

"I think that is a heartening figure," said Bharat Ramamurti, deputy director of Biden's National Economic Council. "I do think that there is a broad recognition in both the House and the Senate and both among Democrats and Republicans in Congress that this is a really deep need."

First, Biden's American Rescue Plan included nearly $20 billion for broadband efforts, as well as $350 billion in aid for state and local governments. And amid pleas from lawmakers such as Rep. Brian Higgins, a Buffalo Democrat, the Department of the Treasury last week issued a set of rules giving local governments more flexibility to use their federal aid to build or bolster broadband networks.

The move will be a boost to Erie County Executive Mark C. Poloncarz's $20 million ErieNet broadband plan. The County Legislature recently approved a contract for the design of that project, which will take seven to 10 months, said Deputy County Budget Director Ben Swanekamp.

Brown says Biden's $2 trillion infrastructure plan needs to take into account a new era of trade between Canada and the U.S.

Then, next spring, when the county receives the second half of its $178.4 million in federal stimulus funds, it plans to go ahead with a project that aims to lay down 360 miles of fiberoptic cable to bring high-speed internet access to every underserved area of Erie County.

In addition to the stimulus bill, the Senate recently passed Schumer's U.S. Innovation and Competition Act, which authorizes $35 million to expand rural broadband, as well as $1.5 billion for Public Wireless Supply Chain Innovation Fund, which aims to boost the mobile broadband market.

Schumer said he has worked to include broadband funding in multiple pieces of legislation because it's so very important.

"The pandemic showed how much we need broadband, whether it's for rural health or educating kids in the city, and for so many other things," Schumer said.

All those federal efforts aim to address a problem that has vexed the nation's inner city and rural areas for decades now: the fact that internet service providers don't see a lot of money to be made there.

"We do not have the kind of access to technology that we really should have in an urban setting, in the second largest city in the state of New York," said Curry, the citizen activist. "Just walking around in the city, you know, walking around places like Canalside, trying to enjoy what we could do in the midst of Covid, the access just wasn't there."

More importantly, many students had trouble getting the access they needed to attend school online, while others had trouble accessing telehealth, Curry said.

The same issues surfaced in many rural areas.

"Our Cattaraugus Territory is 40 miles from Buffalo, the second-largest city in New York, but we can’t get basic services that other areas take for granted," said Matthew B. Pagels, president of the Seneca Nation of Indians. "Right now, we try to get by with slow speed wireless internet and less than adequate satellite service. Neither is sufficient to do anything more than email and both are unreliable for large portions of the year when the leaves are present on the trees."

That being the case, the Seneca Nation plans to use its federal stimulus funds to build its own high-speed network, Pagels said.

Localities eligible for at least $822.7 million in federal aid

Buffalo and other municipalities across the eight-county Western New York region will soon be able to start cashing in on at least $822.7 million in federal aid.

Why are parts of Buffalo and rural Western New York left behind by the commercial internet providers?

"The private sector is going to go where the economics makes sense first," said Rep. Tom Reed, a Corning Republican. And it often doesn't make economic sense for internet service providers to provide that "last mile" of service to areas with few homes and businesses.

That being the case, Reed said there is a growing bipartisan recognition that government must step in to bolster broadband service in underserved areas, much as it did in the federal effort to electrify rural areas during the Great Depression.

"The world is getting smaller and smaller each and every day, and if the rural communities are not wired with that technology, all of that opportunity is off limits to them," Reed said.

Knowing that, Rep. Chris Jacobs, an Orchard Park Republican, is seeking $3.9 million in a federal spending bill this year to help fund a joint effort by Niagara and Orleans counties to deploy a wireless broadband network across underserved areas.

"My hope is, as we do this investment, we actually get internet capacity that is going to satisfy the need for the next decade, at least," he said. "You know, as people are streaming, doing classes online, doing telehealth, the needs are much more robust than they were even a couple of years ago."

A matter of costs

Even with federal funds flowing to communities to expand broadband access, there's one last issue that, according to experts, will make it difficult to fully close the digital divide.

No matter how cheap such service becomes, some people will be unlikely to be able to afford it.

Internet affordability is a huge issue now in poorer parts of Buffalo, said Erie County Legislator Howard J. Johnson Jr., a Buffalo Democrat who said his district is probably the legislature's poorest. That's largely because Spectrum is the only internet provider offering high-speed service in many neighborhoods.

"They can charge the fees they want because they're the only game in town," Johnson said.

To try to counter such situations, the State Legislature earlier this year passed a bill requiring internet service providers to offer high-speed plans to low-income households for $15 a month.

Richard Azzopardi, a spokesman for Gov. Andrew M. Cuomo, said the state will fight in court to try to overturn Hurley's ruling.

“We always knew big telecom would pull out all the stops to protect their profits at the expense of the New Yorkers who need access to this vital utility the most," Azzopardi said.

But even if the state wins the right to implement that law, one stark fact will likely mean that the digital divide, while narrower, will remain.

"Some families, because they're not working, can't afford $15 a month," said Curry, the citizen activist.

Debabrata Talukdar, a University at Buffalo management professor who studies inequities in internet access, raised the same issue – and said it is likely to remain an issue, no matter what Congress does to expand internet access.

"The question becomes whether the people at the bottom of the income scale can afford something which is becoming more essential," Talukdar said. "That is what the society is grappling with."

"I had some people ask me, when they heard I was doing this plan, they're like, 'Oh, you're going to put this money toward a football stadium?' And the answer was, 'Hell no, that would be a waste of this money,' " Poloncarz said. 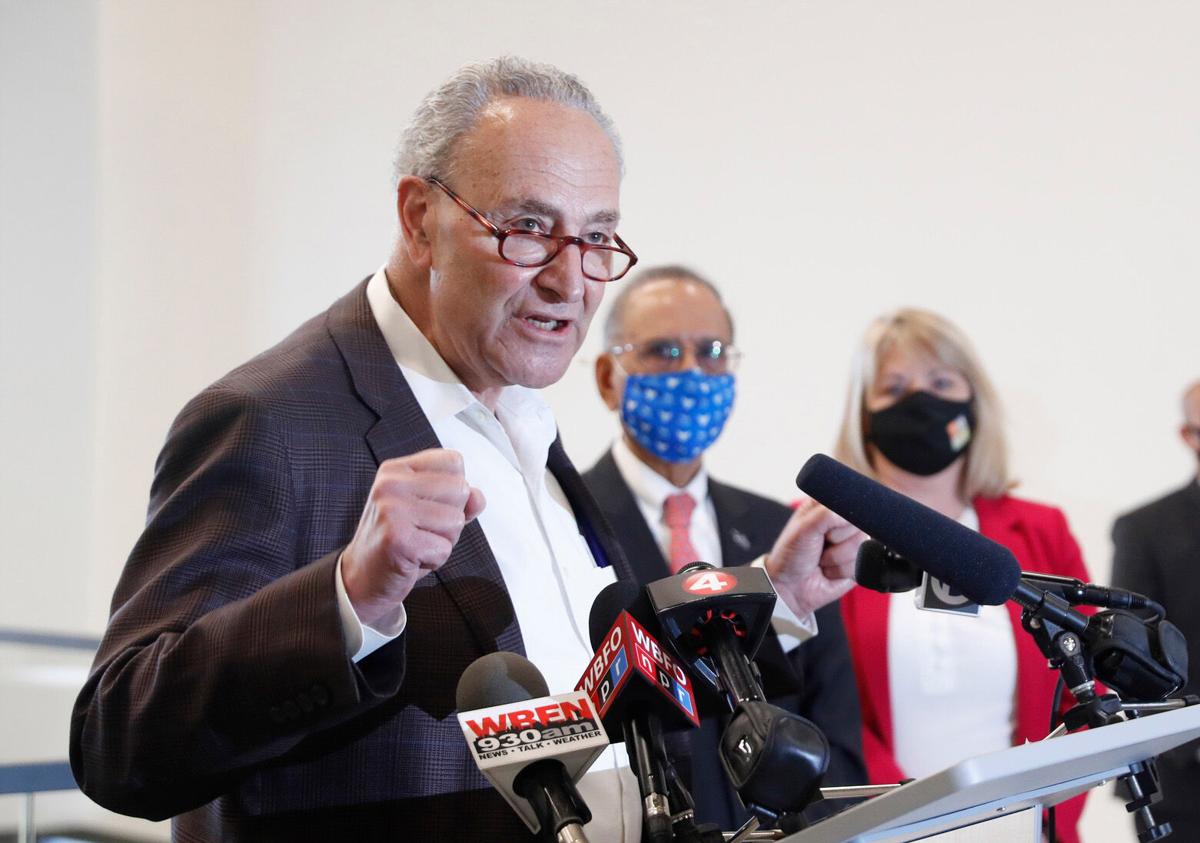 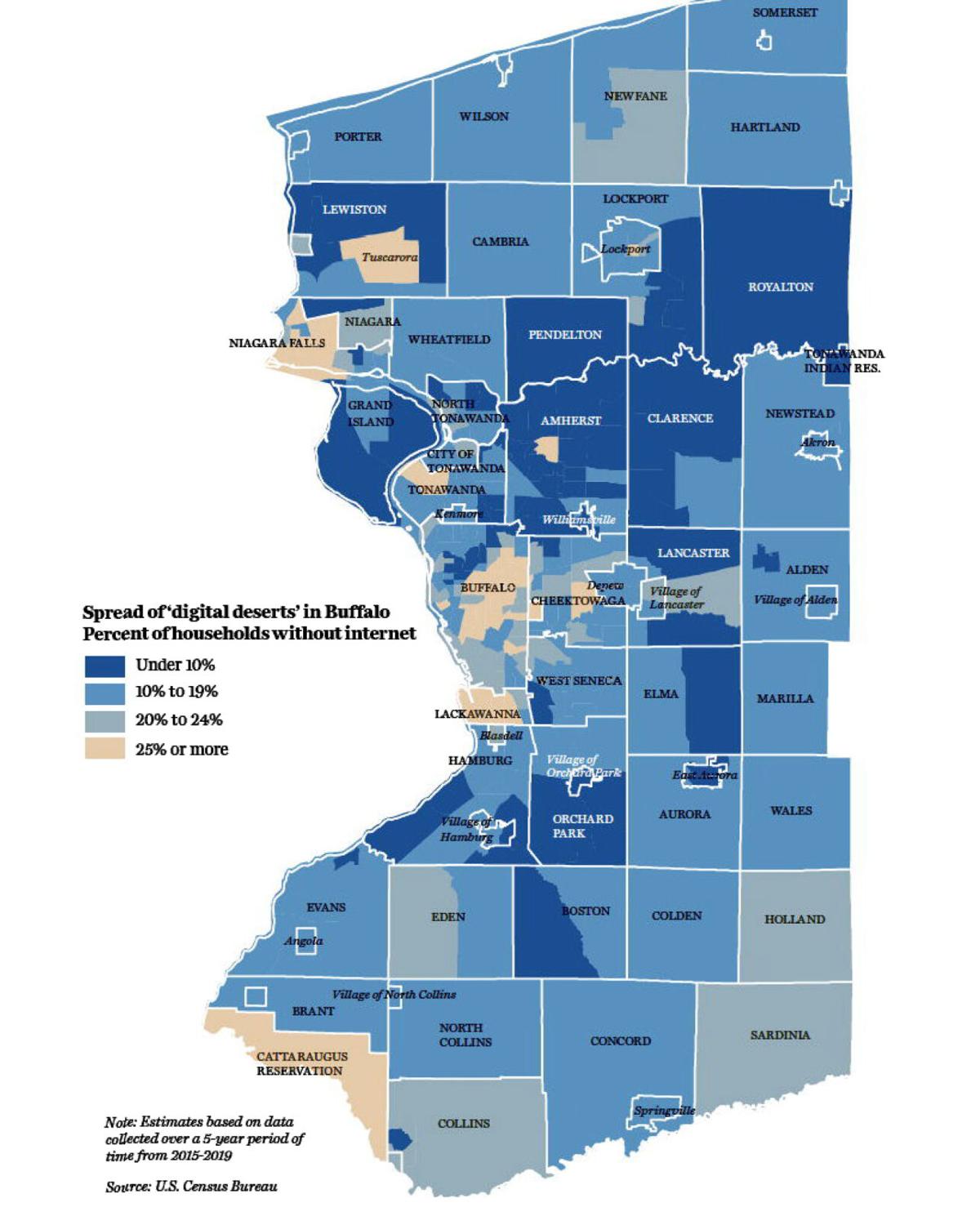