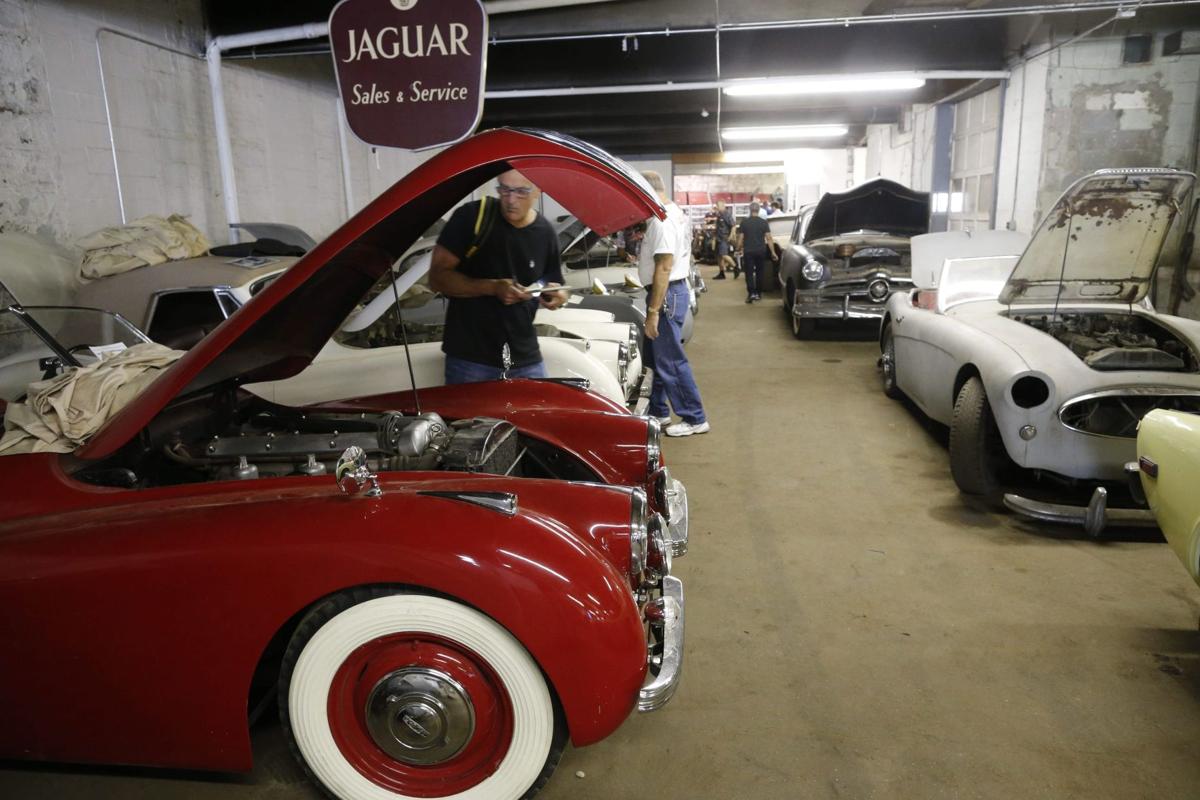 Collectors and potential buyers preview on Friday the automobile collection of Dr. Alexander Drapanas, who passed away in 2013, before it goes up for auction Saturday. 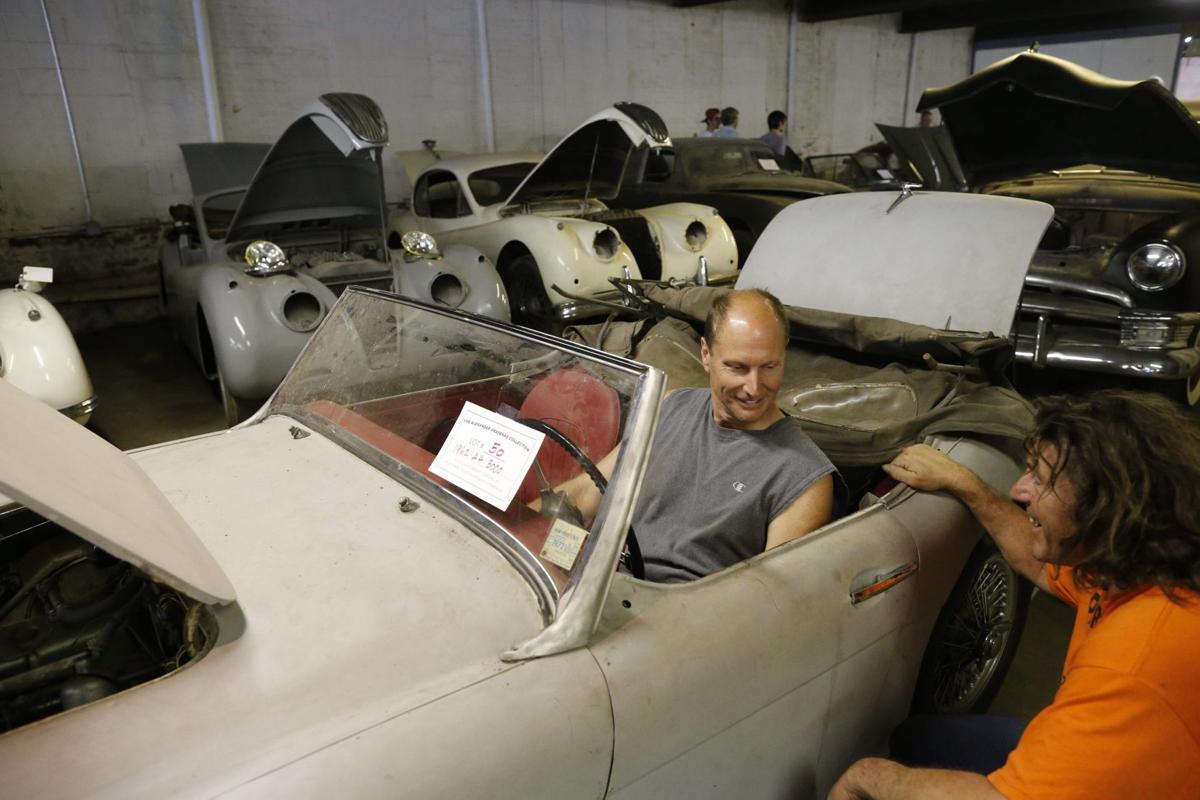 Frank Maraschiello, of the Town of Tonawanda, checks out a 1962 Austin-Healey while Steve Battaglia looks on. 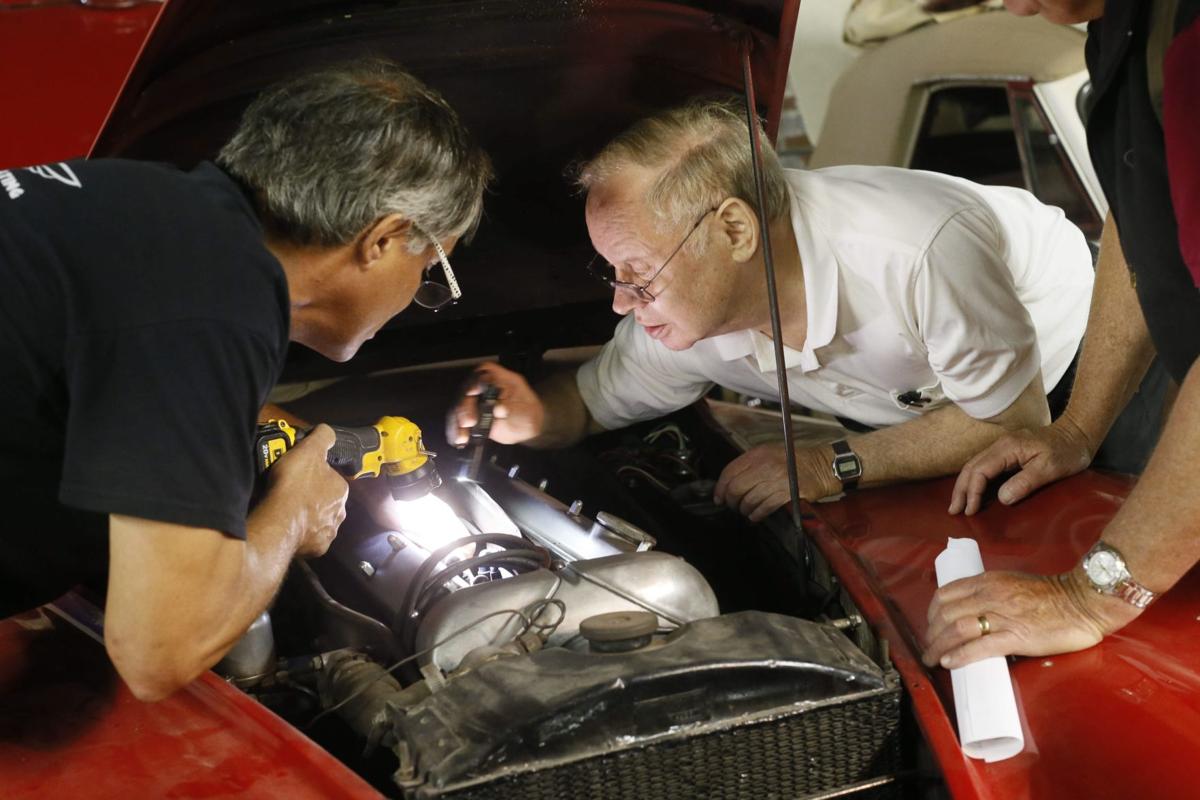 Mike Mueller of Texas, left, and David Ruben of Rochester inspect the engine of a 1951 Jaguar XK120.

Dr. A. Alexander Drapanas was considered a pioneer in local dentistry. He served as the Bisons team dentist and testified as an expert at trials.

He won matches as a nationally ranked squash player as a young adult. He played piano and standup bass. And, he collected fine art and antiques.

He collected them, worked on them and, in his younger days, raced them, especially the Jaguars.

Drapanas kept his classic cars for over two decades in an unmarked brick warehouse at 72-80 College St. in Allentown, about 100 feet from busy Allen Street. They included the first car he owned, a 1950 Ford Sedan; a 1947 Delahaye, expected to sell for $250,000; and a collection of Jaguars and Austin-Healeys.

When Drapanas died in January 2013 at age 76, he left behind 53 antique automobiles. On Saturday, car aficionados will get a chance to buy them.

An auction – including vintage motorcycles, Vespa scooters and car parts – will take place at 11 a.m. in the warehouse, after a preview from 8 to 11 a.m. Attending the auction costs $50, but the charge will be refunded with a purchase of equal or greater value.

“I’m reliving my childhood here,” said Steve Griffith, as he examined the dozen or so Jaguars at a preview showing Friday. He arrived from a small town in Maryland.

The cars offer a trip back through time. But they’re also a window into Drapanas. He did not have any children.

And that extended to his cars.

“He didn’t let a lot of people in here,” said Cliff Schulz, president of the Buffalo Jaguar Club. “He wasn’t a club person. He just enjoyed the cars himself.”

His patients may have figured out his passion.

He commissioned a large painting of a Jaguar that he hung in his Linwood Avenue dentist office.

Drapanas rebuilt and painted the automobiles. He had a paint shop. Still, many of the cars show primer applied years ago, still in need of a top coat. Few of the cars appear fully restored.

“They’re a little rough,” said Paul Cusato, who drove from Cleveland to pick up vintage parts for his car restoration company.

People who knew Drapanas spoke of him in superlatives.

“He was a pre-eminent gentleman, a fabulous man,” said Steve Groh, who has helped arrange the auction. “I met him at a race track when we were both testing cars in Ohio. We both had an affliction,” he said, laughing. “And that was anything with wheels on it.”

Frank Maraschiello remembered being mesmerized by the way Drapanas carried himself.

“He was one of the most interesting people I ever talked to,” Maraschiello said. “He looked like a movie star, and had an aura of confidence. He was just a one-of-a-kind, unforgettable guy.”

Maraschiello, a sixth-grade social studies teacher in Buffalo, had a personal reason for being at the preview.

One of the sports cars – what Maraschiello called “a touring car, 1962 Austin-Healey tri-carburetor” – once belonged to his father.

His late father bought it in 1972, when Maraschiello was 13. The inspection sticker remains affixed to the windshield.

It remained in the family garage for 17 years but was driven only once.

“We didn’t have a lot of money, and that was my father’s prize possession, that car,” Maraschiello said.

“He never would take it out – I don’t think he wanted to put any more miles on it – but he would tune it up and start it. And he’d go out in the garage and sit in that car all the time, smoking a cigar,” he said.

Maraschiello’s father sold the car in 1989 for $4,000 to give his son and bride the money as a wedding gift.

“I told him, ‘Dad, don’t sell the car.’ He said, ‘Your wedding’s more important.’ I felt terrible when I realized what he was doing, and why he did it,” Maraschiello said.

As he talked, he peeled back the lowered convertible top to reveal the jump seat in the back. That is unusual for sports cars, he said.

“My brother and I would have been in the back seat if he ever got it out of the garage,” Maraschiello said.

Now, at age 53, he’s hopeful the car will return to the family fold.

“I’ve dreamed about this car and trying to buy it back. If there’s one thing I don’t have, and would want to get, it’s this, because it is 100 percent my Dad,” Maraschiello said.

Would he keep it garaged, as his father did?

“I never had a ride in the car. I will restore it 100 percent brand new, and I will drive it until the wheels fall off,” he said.

In a room with vintage car parts, Chris Fuller of East Aurora inspected what he called an “assemble-it-yourself” lot, featuring what he estimated to be 75 to 80 percent of the parts to a late-1940s MG.

Just being inside the warehouse was a thrill, said Fuller, who grew up in Allentown.

“I saw inside 30 years ago, and I can’t believe I’m walking through here all these years later. I’ve been telling friends about this mythic warehouse with Jaguars for years. You don’t see places like this,” Fuller said.

Auctioneer Kelly Schultz said calls have come in from around the world for Saturday’s sale, with bidders expected from England, Australia and Finland. They’re also coming from around the United States.

What makes the auction unusual, he said, are that all of the cars will be sold without a minimum bid.

“Whatever they sell for, they sell,” Schultz said. “This is an auction that very seldom comes along. Everything will be sold.”

Groh said he thought his late friend would have approved of how the sale will be conducted – and be shocked at how much the-once cluttered warehouse was cleaned up.

“I think he would be proud of the way we’ve laid the cars out, and how much care and appreciation we have put into his collection,” he said.

"I hate to just default to apartment conversions," Greenleaf Development's James Swiezy said. "I think we need to try to be creative."

Collectors and potential buyers preview on Friday the automobile collection of Dr. Alexander Drapanas, who passed away in 2013, before it goes up for auction Saturday.

Frank Maraschiello, of the Town of Tonawanda, checks out a 1962 Austin-Healey while Steve Battaglia looks on.

Mike Mueller of Texas, left, and David Ruben of Rochester inspect the engine of a 1951 Jaguar XK120.