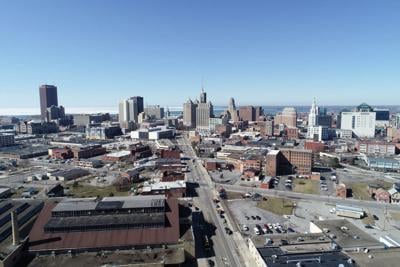 Buffalo's population is growing for the first time in 70 years, according to the 2020 census, defying both the predictions of local demographers and the longtime cultural and economic narrative of the Western New York region.

The Western New York region’s gains – driven entirely by residents of color, many likely refugees and immigrants – appeared to vindicate local political leaders who have championed immigration as a means for reversing the area’s long-term shrinkage.

“You will recall that for many, many years, I talked about the fact that I believed that come the 2020 census, we would see an increase in population in the City of Buffalo,” Brown said. “There were some that doubted that. But we could tell based on the movement of new Americans in our city, and our strategic efforts to be a welcoming city, to reach out to new Americans, to invite people of different backgrounds to come to our city, that that strategy was working.”

Buffalo’s growth surprised some geographers and population researchers, who had expected the city to continue shrinking at the expense of Erie County’s outer suburbs. Instead, both the suburbs and the city grew, with losses concentrated in rural towns, such as Alden and Evans, as well as in the neighboring counties of Niagara, Allegany, Cattaraugus and Chautauqua.

Gains were most pronounced in the region’s communities of color, which expanded in all five counties and reversed white population decline in places such as Cheektowaga and Buffalo. Some portion of that increase is likely due to changes in how the U.S. Census Bureau words questions about race and ethnicity, bureau officials have said in calls with reporters.

But there’s little doubt that Western New York, like the rest of the country, is also “growing because of minorities,” said Mark E. Reisinger, a professor of geography at the University of Binghamton who studies domestic migration. In a preliminary analysis on Thursday, Russell Weaver, the director of research at Cornell University’s ILR Buffalo Co-Lab, found that neighborhoods across Erie and Niagara counties grew more racially diverse over the past decade, on average.

In addition to long-running demographic trends – such as the aging of the region’s white population, and higher birth rates among some racial and ethnic groups – dramatic influxes of Asian and multiracial residents in places like Buffalo’s Broadway-Fillmore and Riverside neighborhoods suggest new migration into the region boosted population figures.

On one nine-block stretch between Broadway and Walden Avenue, popular with Bangladeshi immigrants, housing vacancy fell to 17% from 31% a decade ago, and the population almost doubled to 4,100 residents.

“This is tremendously exciting news for our community,” said Eva Hassett, the executive director of Buffalo’s International Institute. “The population growth reported by the 2020 census clearly demonstrates the value that our foreign-born neighbors bring to Buffalo.”

Other communities in the region were not so lucky, which could affect federal funding and other investment in the future. In Niagara County, only Wheatfield and Pendleton added to their populations in the past 10 years. Allegany, Cattaraugus and Chautauqua counties also lost a combined 13,000 people.

Results from the 2020 census will be used to determine the shape and location of legislative districts and influence the allocation of roughly $900 billion in federal spending, including more than $120 billion in New York State. In 2017, the latest year for available data, Erie and Niagara counties received more than $82.8 million in census-directed federal education and development grants, according to George Washington University’s Census Project.

In his remarks Thursday, Brown said the 2020 census would “bring more federal funding” into the city, as well as new businesses and residents.

“We're very pleased by these numbers,” he said.

The Editorial Board: Census gains for Buffalo, Erie County prove that our renaissance is real

New census figures show Broadway Fillmore added more than 3,100 people – marking a sharp reversal from decades of decline and ranking it among the fastest-growing areas in Buffalo.

During Hassett's 12 years at the International Institute, she became a prominent advocate on behalf of immigrants and refugees coming to Buffalo.

Brown's supporters in Buffalo's immigrant communities say he is doing the right things to make newcomers feel welcome in the city, but India Walton says she will do even more for them.