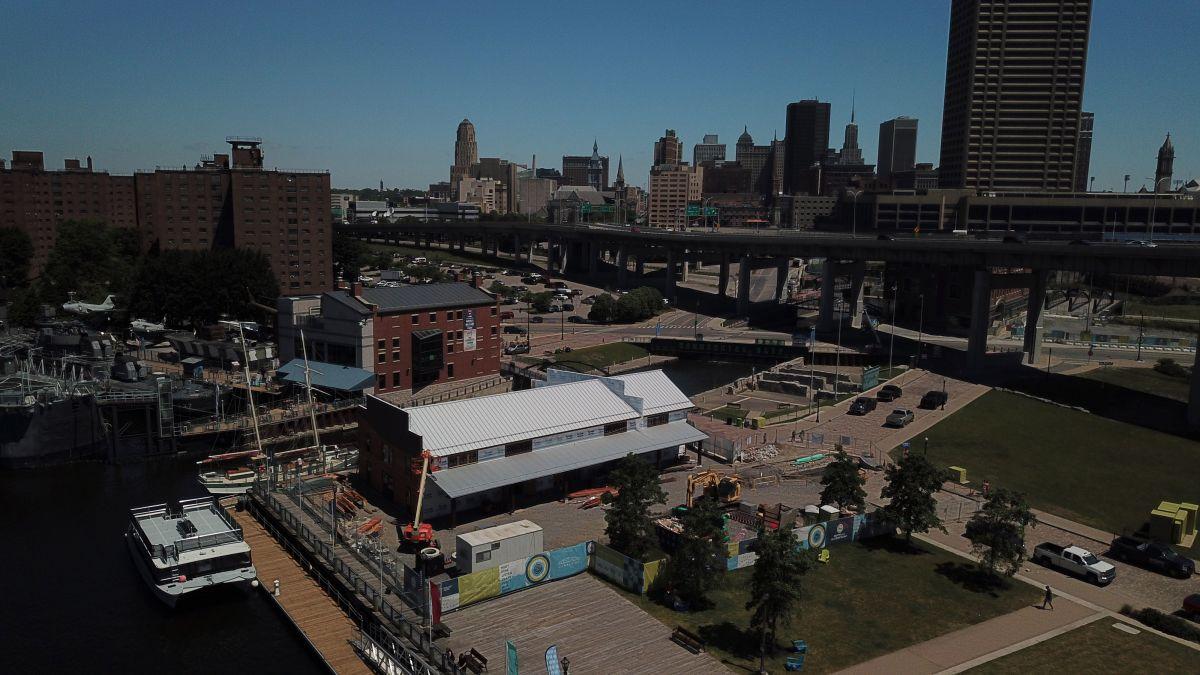 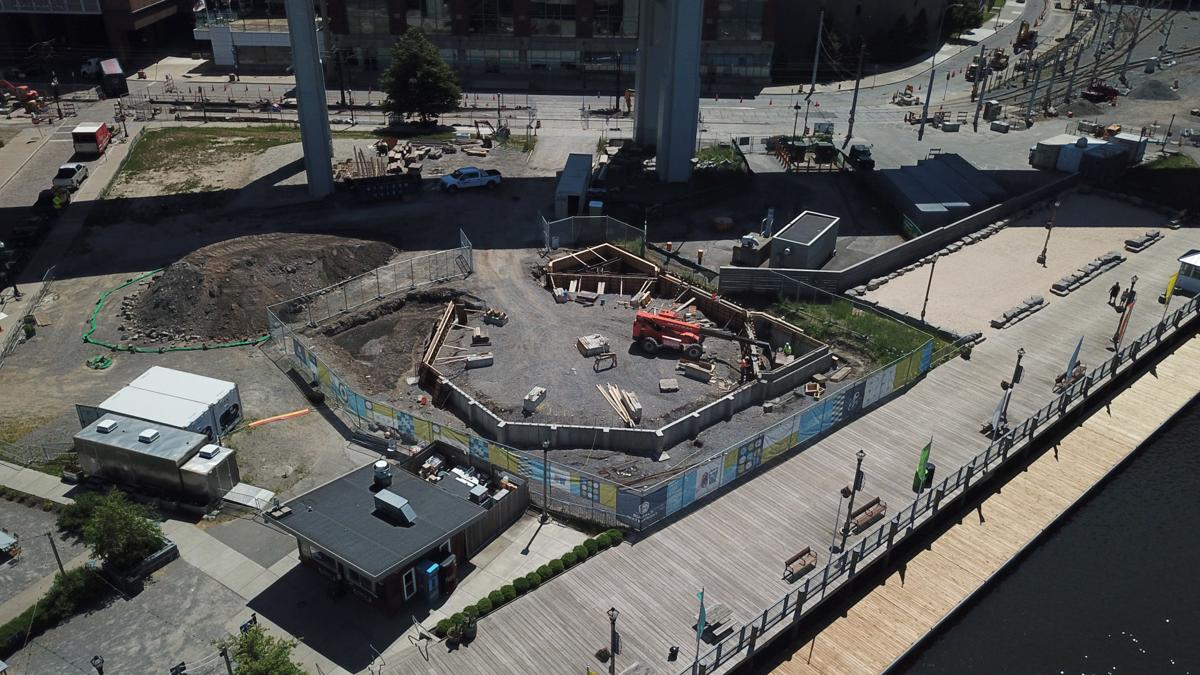 Update on the delayed carousel building projects at Canalside, the carousel opening is pushed back to May 2021, at Canalside, in Buffalo, on Thursday, June 18, 2020. (John Hickey/Buffalo News)

Riding a vintage carousel at Canalside will have to wait until next May due to construction delays resulting from Covid-19.

But helping build a 19th-century packet boat at the Longshed building, now due to be completed in September, appears possible by the end of the year.

"The good news is they are back and moving," said Steven Ranalli, president of Erie Canal Harbor Development Corp., of the two projects.

Schedules are in place for the Buffalo Heritage Carousel and Longshed projects, with no backups for materials expected, he said.

Also, excavation at Heritage Point – the first mixed-use development coming to Canalside – is expected to begin next month.

Construction at Canalside was suspended from March 17 until last week due to the pandemic.

The Longshed had a July completion date and was ahead of schedule when work was halted, with exterior cladding and interior finishes already completed. The Buffalo Maritime Center, which will lead the volunteer boat-building effort as part of the bicentennial celebration of the opening of the western terminus of the Erie Canal, hopes to move into the building in October and begin the project shortly afterward.

“We were disappointed initially, but in perspective, three months of delay while we kept people safe was a great tradeoff," said Brian Trzeciak, the center's executive director. "We’re excited to get in the building in late September or early October, and we’re planning on a public opening about a month or so after that."

Trzeciak said a safety plan will be in place for staff, volunteers and visitors when the building opens.

The timeline for the solar-powered carousel isn't as fortunate.

The three-row, park-style carousel built by Spillman Engineering Co. in 1924 in North Tonawanda was originally expected to open this month. The octagonal roundhouse is now scheduled to be fabricated in July, erected by the boardwalk and behind Clinton's Dish in August and completed in December.

"We really wanted the carousel to be open some point this summer," Ranalli said. "There was also a national carousel convention that was coming to Rochester the second week in September and they had planned a trip to Buffalo. That was really driving the schedule. We don't have that pressure now."

The National Carousel Association convention was canceled due to the pandemic and has been rescheduled in Rochester in 2021.

That was some consolation to the Buffalo Heritage Carousel volunteers who looked forward to the carousel opening this summer.

"We're disappointed we weren't able to be opened as planned in June 2020 due to the pandemic crisis," said Laurie Hauer-LaDuca, the carousel group's president. "But we are re-mobilizing and persevering on the project, and look forward to the grand opening in 2021."

Restoration of carousel animals for Canalside heads to the backstretch

Buffalo Heritage Carousel's workshop in North Tonawanda reopened in June, allowing volunteer painters to work on the carousel's rounding boards. They are taking direction from Rosa Patton, a nationally renowned carousel painter in North Carolina who had planned to come back to Buffalo before the pandemic hit. Patton is also completing scenery paintings for the rounding boards, and Carousel & Carvings, in Ohio, is building two wooden chariots.

The work should be wrapped up in October, Hauer-LaDuca said.

The Heritage Point development that will be located on Marine Drive, by the replica canal, will feature two five-story buildings with 41 residences, restaurants, offices and shops. Its construction is expected to last two years.

As for a separate project, a request for proposals to develop land that was once part of the footprint of Buffalo Memorial Auditorium, known as the "North Aud block," could be issued this year but may wait until 2021, Ranalli said.

The land would be sold to a private developer in accordance with a conceptual plan developed for the site that includes a mix of residential and retail.

Ranalli said he wasn't sure if the request would seek one developer or more for the site.

"That is something we are still looking at," Ranalli said. "So much has changed in the last three months that we have to take an honest look at what makes sense moving forward."

The Editorial Board: Resumption of important projects a healthy sign for Buffalo

Caribbean-style music and island drinks are part of the experience, along with relaxed views of the city, Buffalo River and Lake Erie.

A vintage carousel coming to Canalside reached an important milestone Wednesday with the start of constructing the wooden frame for the roundhouse.

A 73-foot-long canal boat is expected to take shape over the next two to three years at Canalside under the direction of the Buffalo Maritime Center.

Tesla agreed to donate a solar roof to power the Buffalo Heritage Carousel, scheduled to open in the spring.

The pandemic hasn't put a damper on fundraising for the carousel coming in May to Canalside.

Construction to begin on first apartments at Canalside

While a long time in the making, the future of Canalside as a neighborhood of apartments, shops, restaurants and attractions, bustling day and night, will begin to take shape Tuesday.

Update on the delayed carousel building projects at Canalside, the carousel opening is pushed back to May 2021, at Canalside, in Buffalo, on Thursday, June 18, 2020. (John Hickey/Buffalo News)